Headbutting a door … a bump in the night

Our week started with an anniversary meal on Monday, followed by the usual monotony of lockdown, and ended with (quite literally) a bump in the night. Specifically Ioan’s forehead bumping into the side of his bedroom door at midnight (apparently he was trying to get to our bedroom and tripped), which resulted in a most spectacular goose egg bump on his forehead, and subsequent trip to A&E. 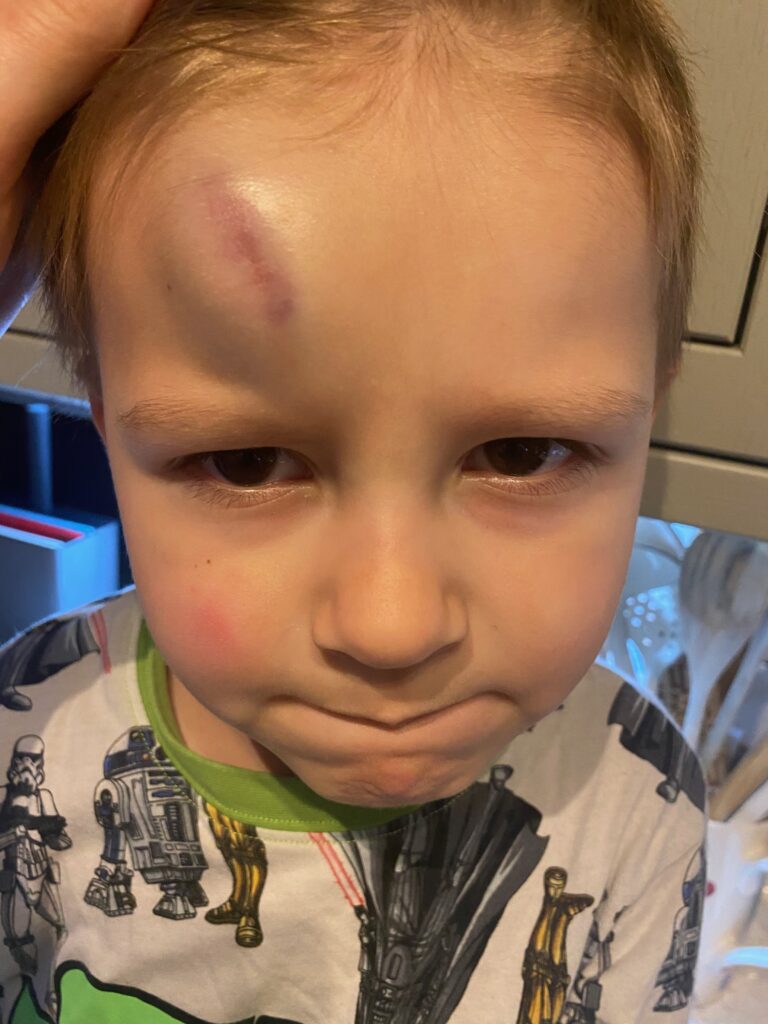 He’s okay, thankfully. This photo doesn’t even do the injury justice – the lump has got bigger, and a deep purple. He is fascinated by the changing shape of his head, and the changing colours too (and I suspect there will be many more shades of blue, green and yellow to come). The staff at North Middlesex Hospital’s children’s A&E department were fantastic to both Ioan and me, and everything was very well organised. We were in and out within an hour, and told to look out for the usual things to be concerned about with a head injury, but that luckily Ioan seemed to be neurologically fine. So now we just get to watch the bump evolve.

As I mentioned last week, Andrew and I celebrated 25 years together on 25 January, and following our official celebratory meal from Kanishka, I took a trip back in time for our celebratory meal on the actual day. 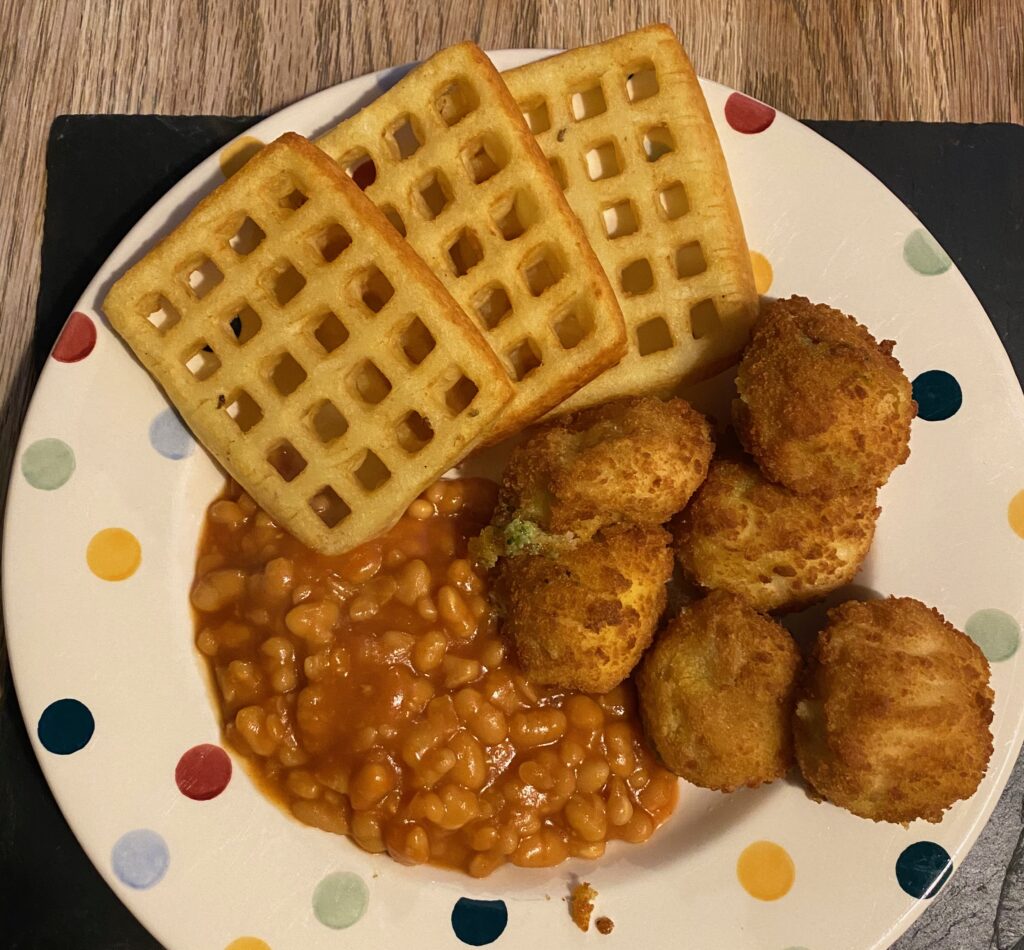 Yes, this is mini chicken Kievs, Birdseye potato waffles, and baked beans. This was our favourite meal together when we started going out (sophisticated tastes eh?!), and I have cooked it for us occasionally in recent years. Posh shop Ocado doesn’t sell Bernard Matthews mini chicken Kievs (in fact nowadays they are made of turkey … well, they may well have been in the good old days too), but do have a version of mini Kievs which I took a chance with. 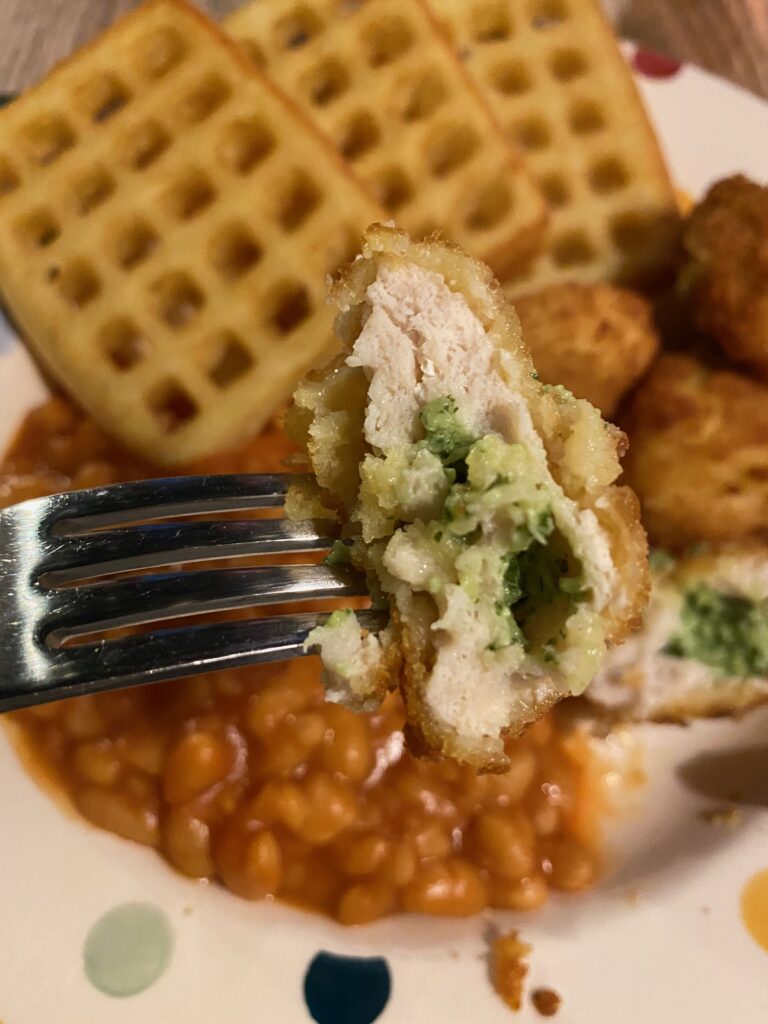 As far as reformed breaded chicken filled with garlic cream cheese goes, the M&S versions from Ocado are rather good (pricey though). They got the thumbs up from Ioan (he loves anything garlicky), and they were processed enough to reach the right note of nostalgia for Andrew and me. Should I be ashamed to say that I will buy them again?! And of course the potato waffles and baked beans are a staple in our freezer and cupboards anyway. 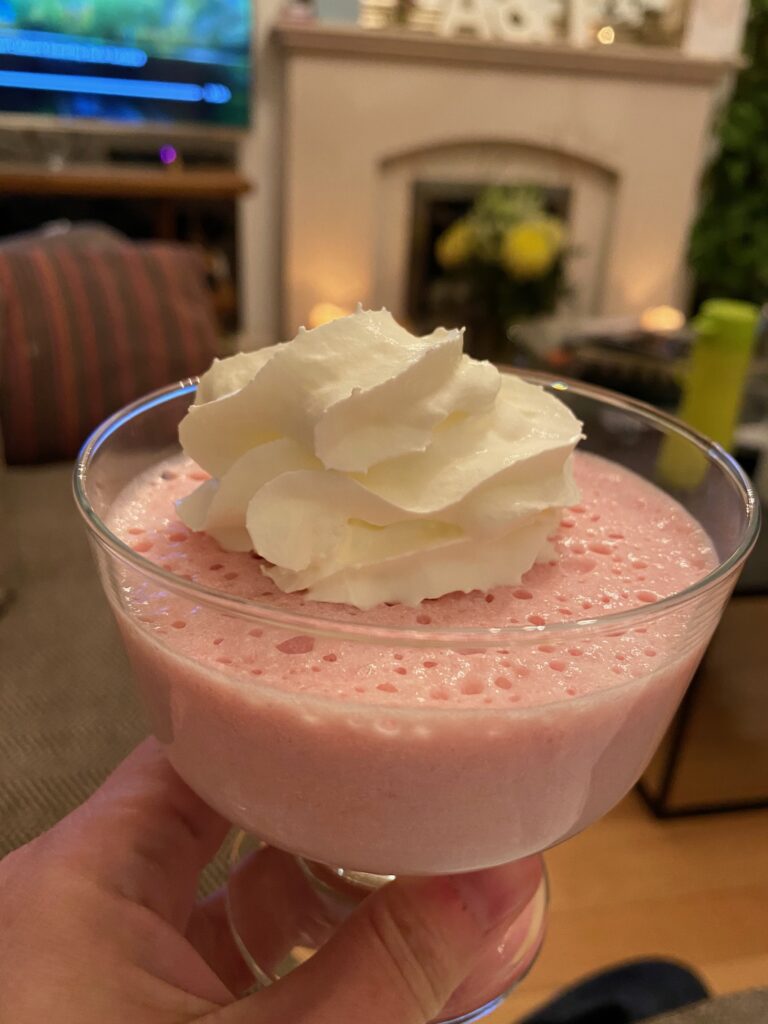 For pudding, it had to be Angel Delight. Personally butterscotch is my favourite, but for Andrew it’s strawberry, so that’s what we had. The idea that one packet will feed four people is, frankly, a joke. Otherwise I have to say it was delicious, and I like to think that the squirty team on top made it even more special!

As we celebrated our anniversary on the 25th we bumped the Burns night Haggis, Neep and Tatties to Tuesday. Ioan point blank refused to even try the haggis (understandable), but he loved the mash and swede. 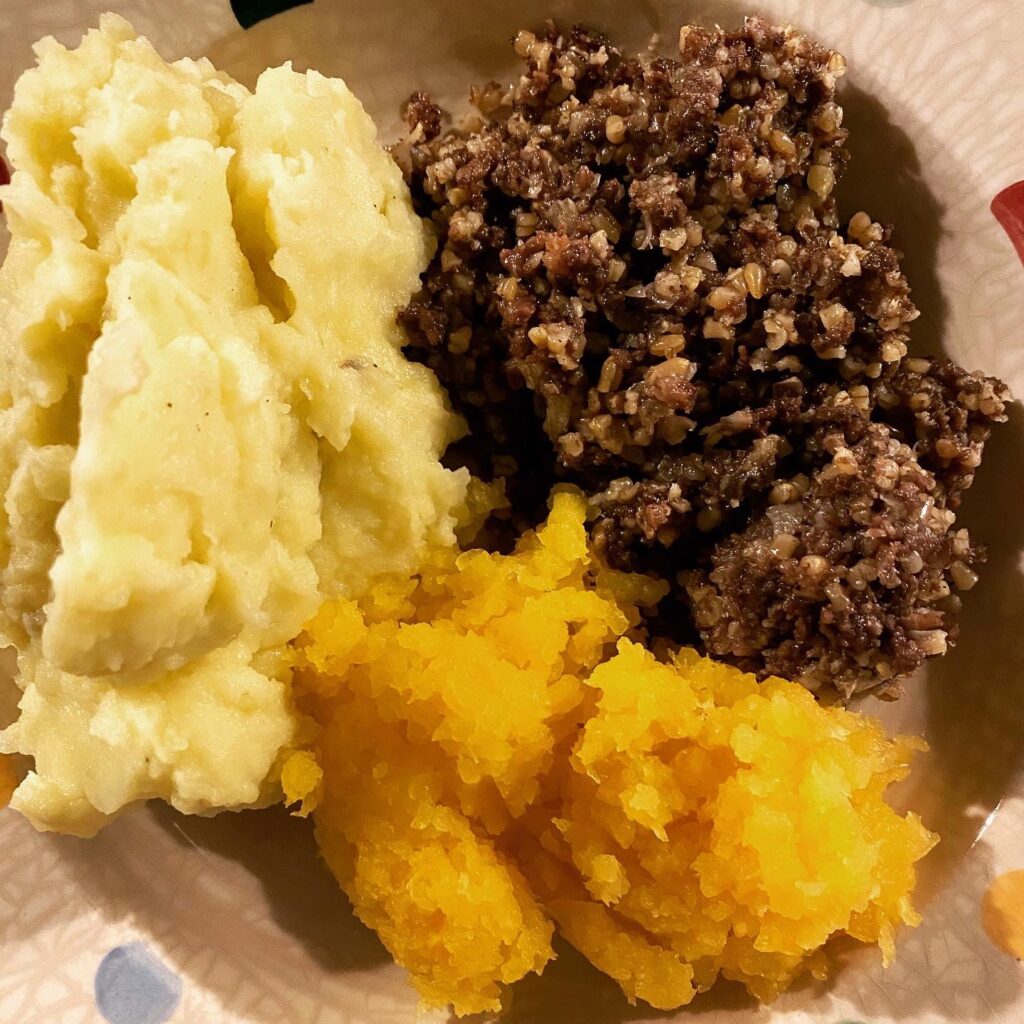 Fajitas and Korean pancake were delicious, but I took rubbish photos, so you don’t get to see the delights.

Friday evening followed our rather stressful trip to A&E with Ioan, so we enjoyed a Goodness Brewery pizza that evening. I was too scared to risk drinking any wine in case we had to return to A&E, and slept with Ioan so that I could keep an eye on him through the night. 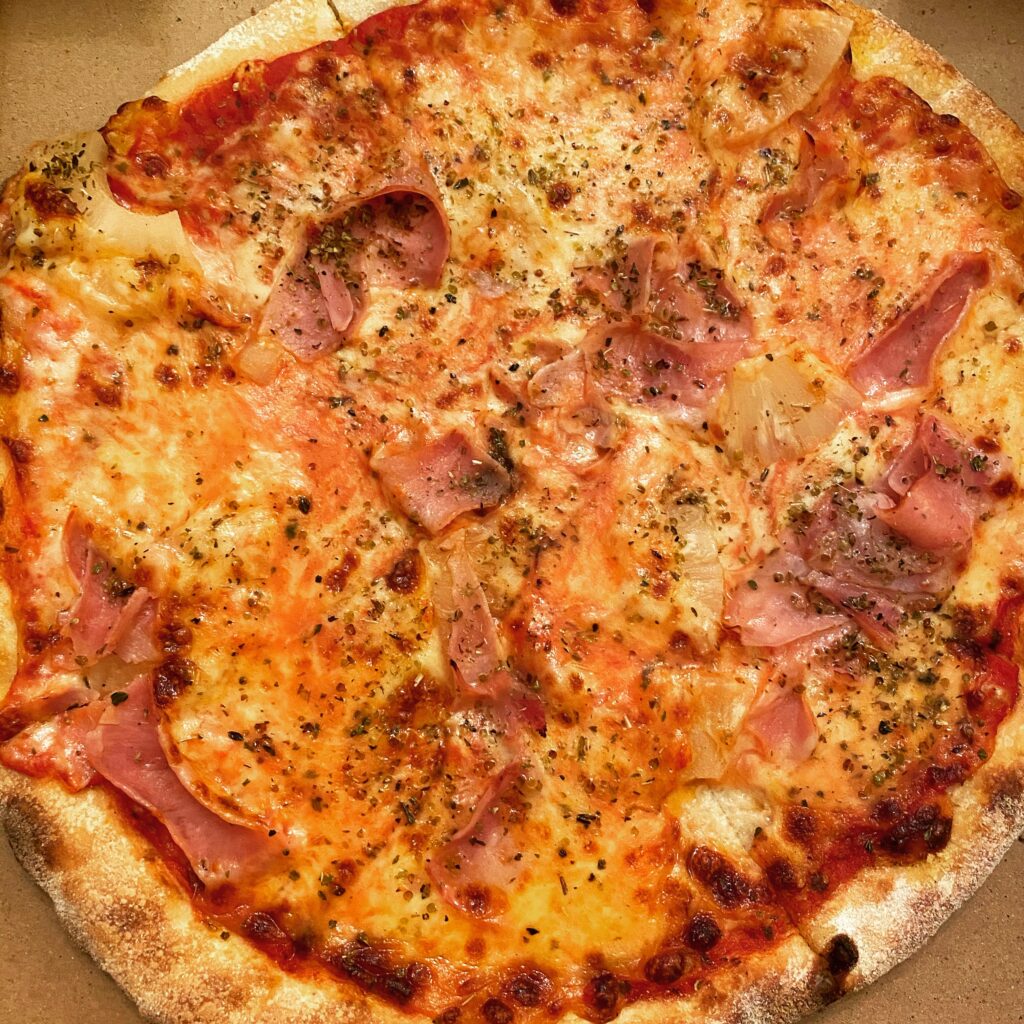 On Saturday I made a meal which had been recommended to me by my colleague Charline, and I’ll share the (extremely simple) recipe with you soon: baby pasta shells with ham, cheese, and truffle. It was quick, easy, and comforting, so definitely a winner for us. 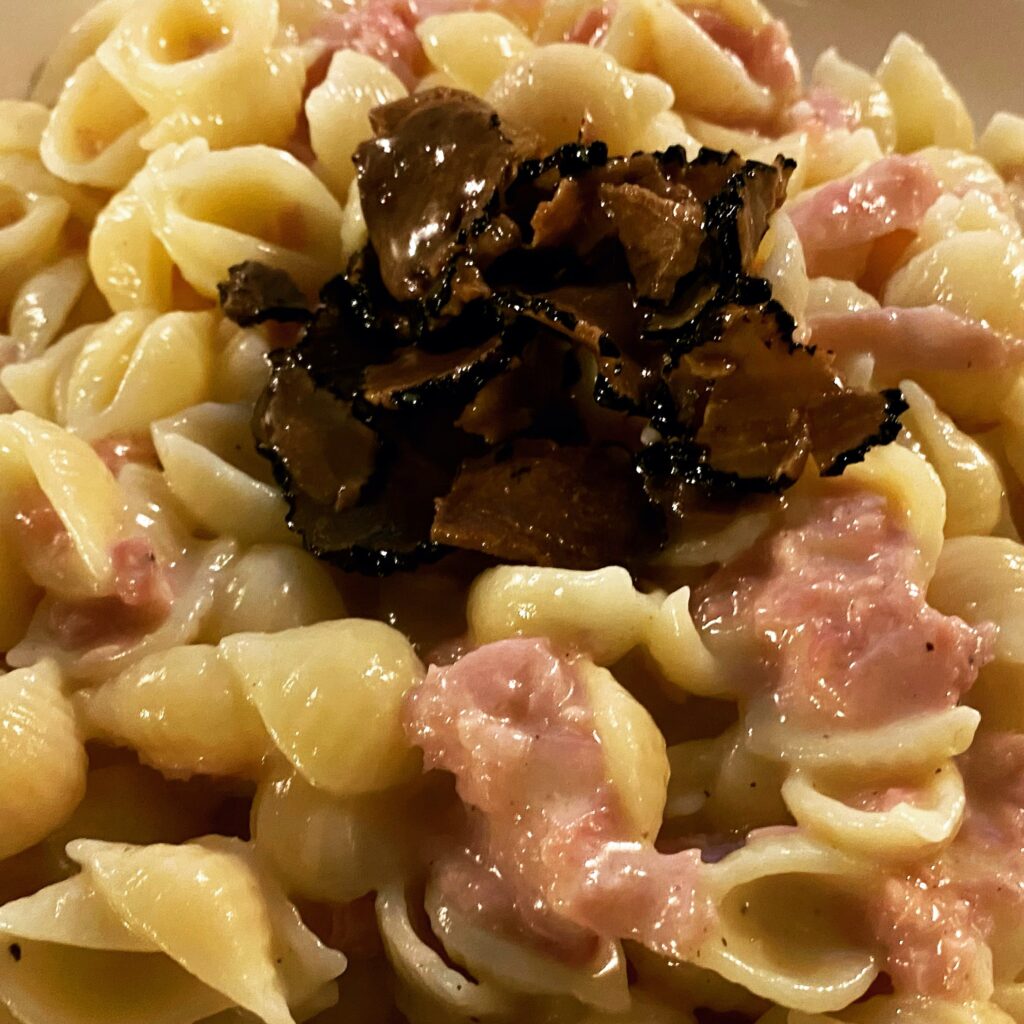 And for an alternative to a Sunday roast I made salmon en croute, which – whilst being made up on the spot – was absolutely delicious: salmon wrapped in wilted spinach, coated in Boursin cheese, and encased in puff pastry. It was really easy to make and looks impressive enough for a dinner party (hey, I can dream … one day we WILL socialise again!). 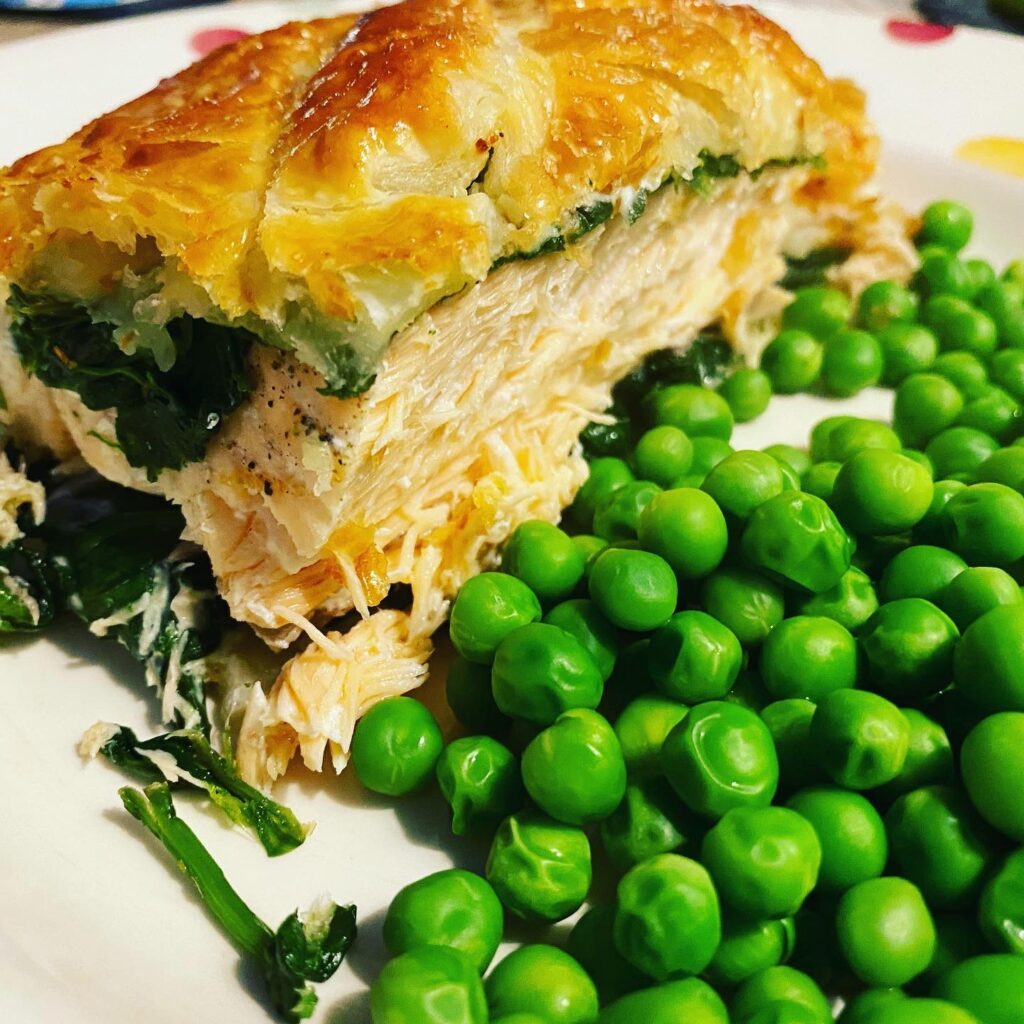 Here’s hoping that this week is less crazy than the last one!