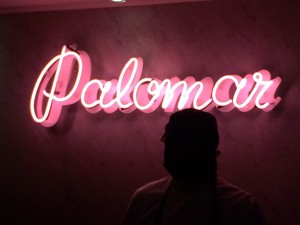 Of course for our Alphabet Adventure beginning with ‘I’, an Indian would have been an easy one, but we wanted to try something a bit different and I’d read some fantastic reviews of The Palomar, which describes itself as serving food from modern-day Jerusalem. Centrally  located for all of us in London, we were a bit frustrated about not being able to make a reservation, but dispatched Charlotte there early to bag us a seat at the bar, assuming they wouldn’t turn away a pregnant woman with late friends … and they didn’t.

Sitting at the bar wasn’t particularly comfortable, especially as we were in a row next to eachother which made it difficult to chat, with our bags piled up by our feet. We were also regularly disturbed by waiting staff squeezing past us to attend to customers, and other people arriving and propping the door open whilst they waited for a table – this was all very annoying and I wouldn’t recommend going there if you can’t get a table.

However, the food was really spectacular. We started with kubanah, a Yemeni pot baked bread served with tahini and tomatoes. The bread was soft and doughy like chollah bread, with a hint of sweetness. I could have easily gobbled up the whole lot myself but was obliged to share with the girls. 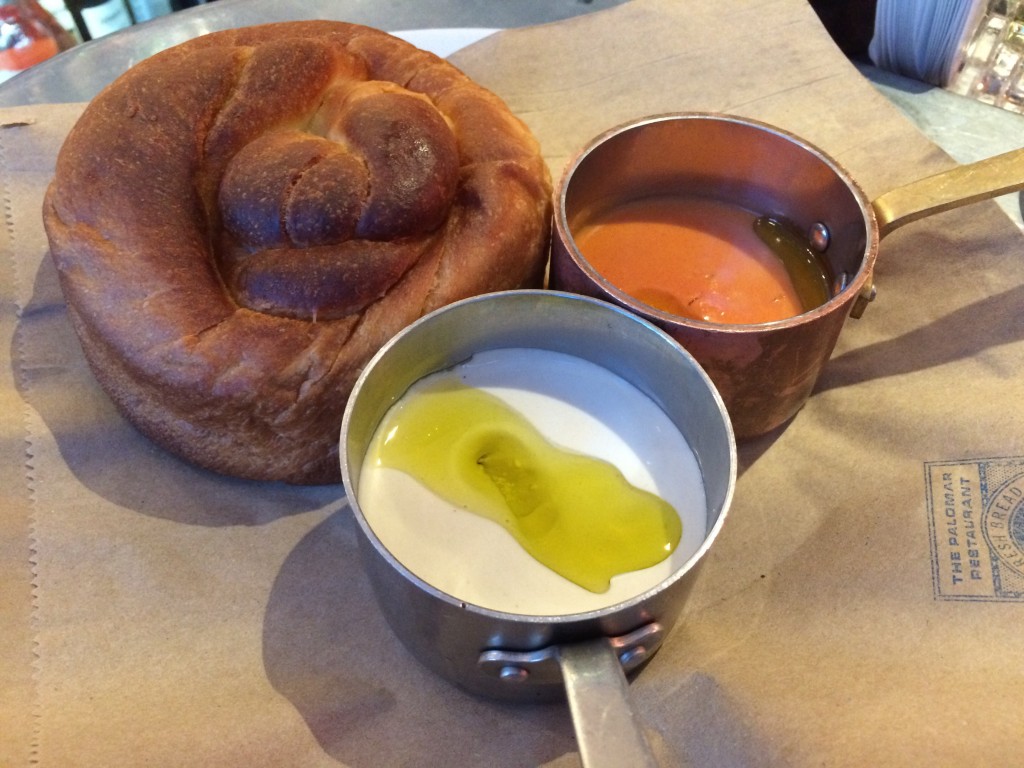 Jo and I shared the yiddish style chopped liver (unsuitable for the pregnant Charlotte), which was delicious but hard to eat (especially when you have to share!). 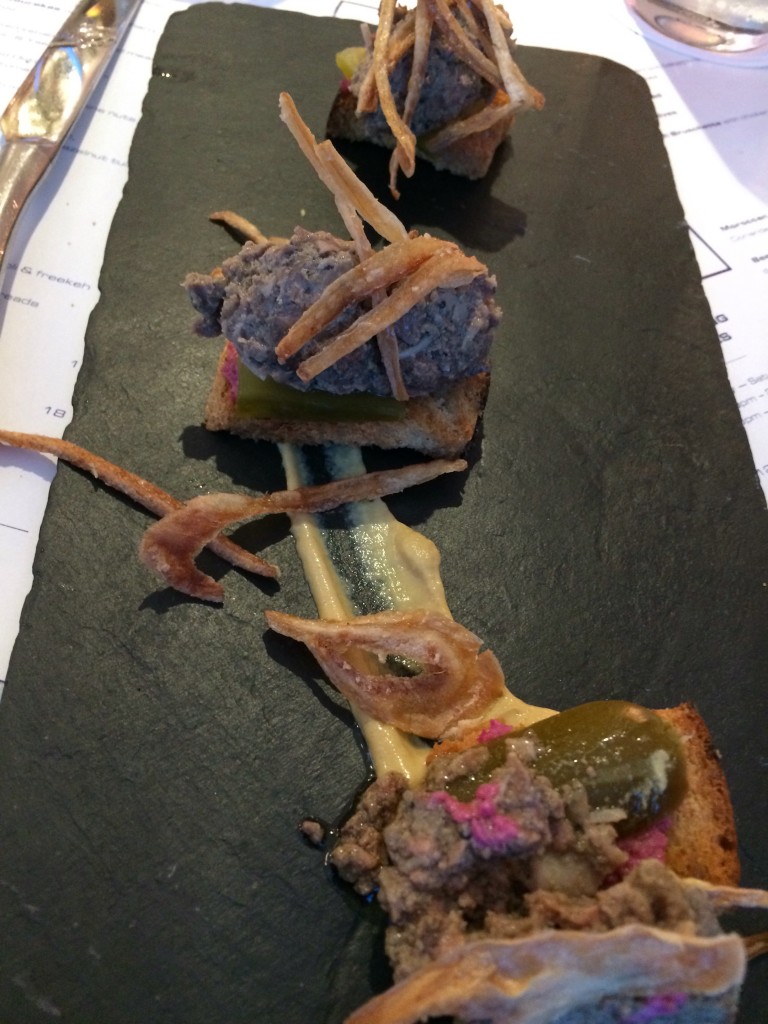 Next up was a whole roasted cauliflower, which was one of my favourites. The top of the cauliflower was caramelised and served with lemon butter, labneh and toasted nuts. 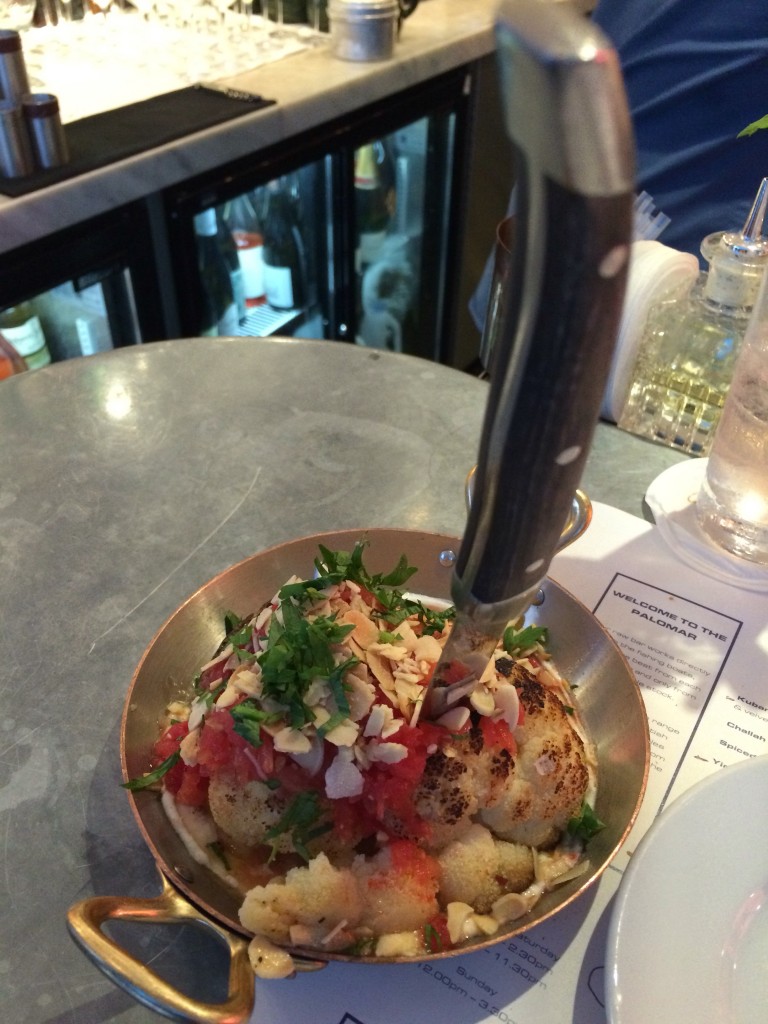 Then we had shakshukit – a deconstructed kebab with minced meat, yoghurt, tahini and pita. This was tasty and fresh, and definitely was nothing like your typical dirty kebab succumbed to after a night out. 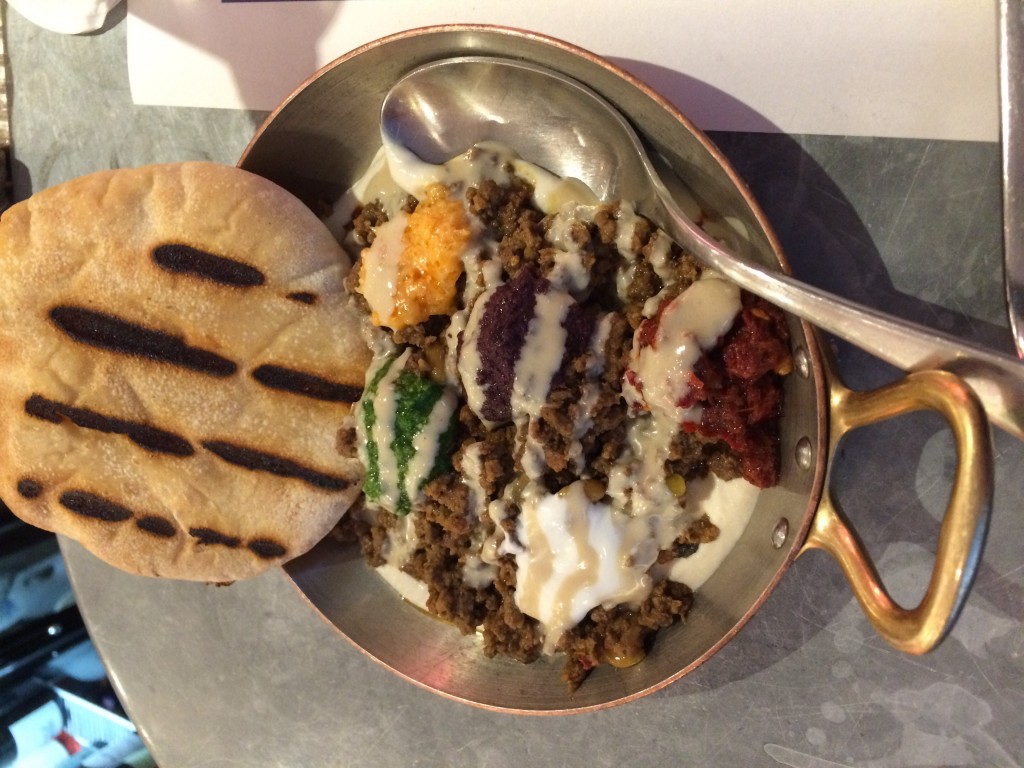 I didn’t have any of the Jerusalem style polenta which came with mushroom ragout, but the girls said it was delicious: 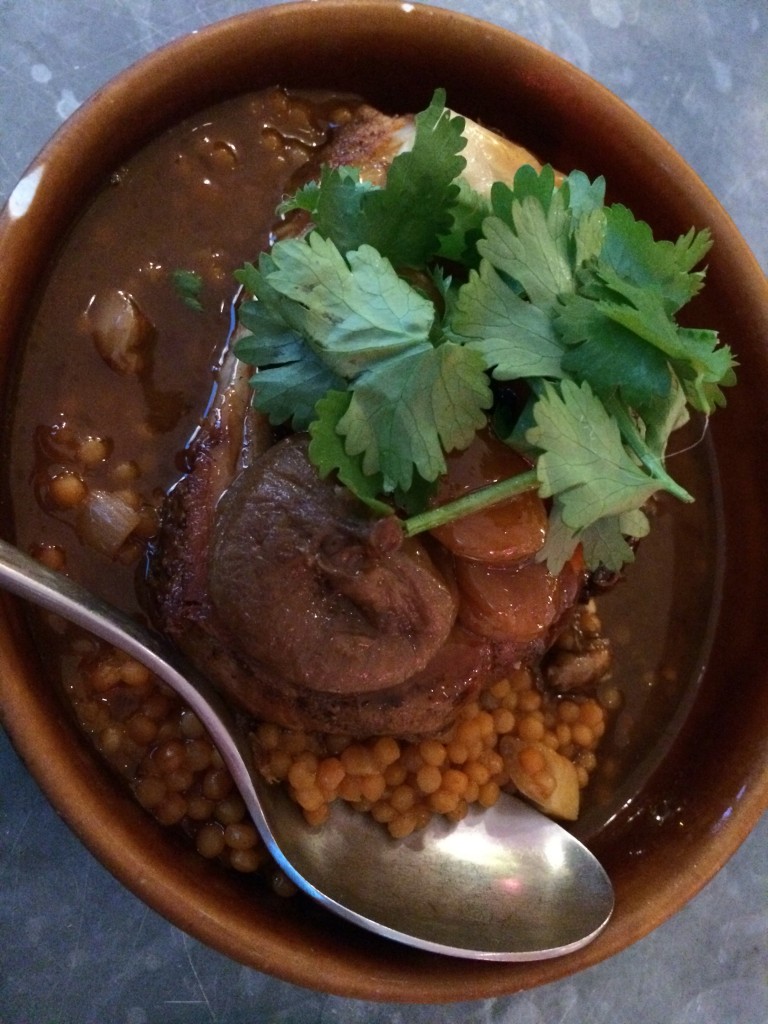 I wish I hadn’t tried the Octo-hummus: octopus steak with chickpeas and tomatoes. We all thought we liked octopus but had been disappointed by it in the past, and this time we were all disappointed in it again – too fishy and tough for any of us to contemplate trying it again! 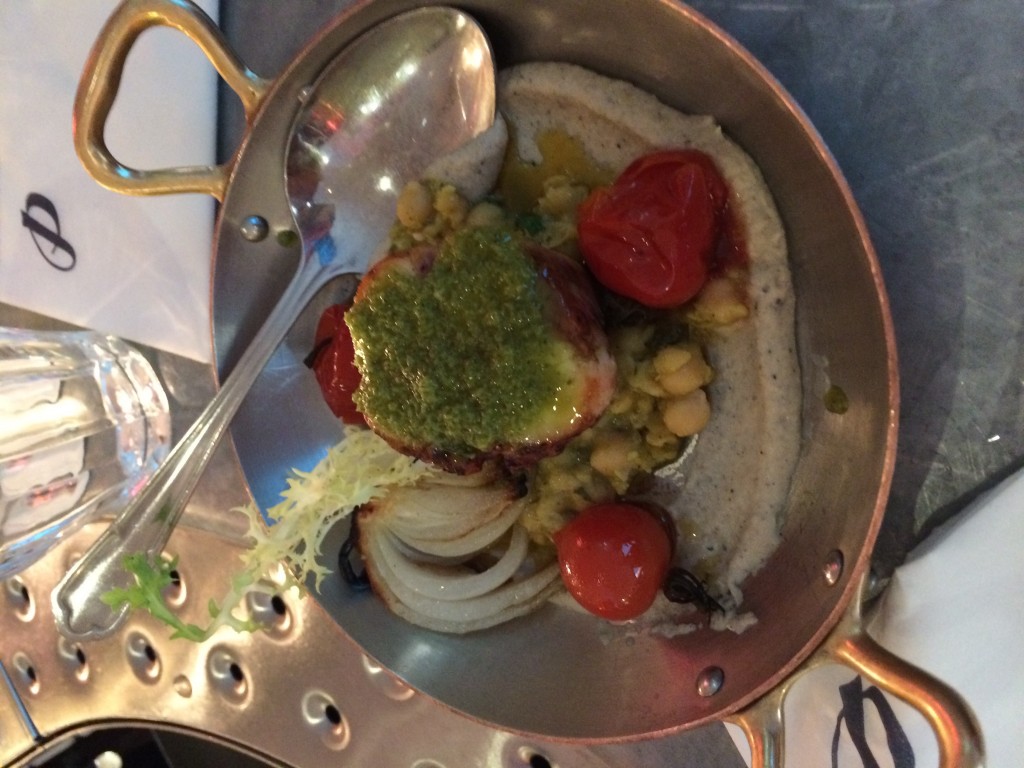 For pudding we had carrot cake: 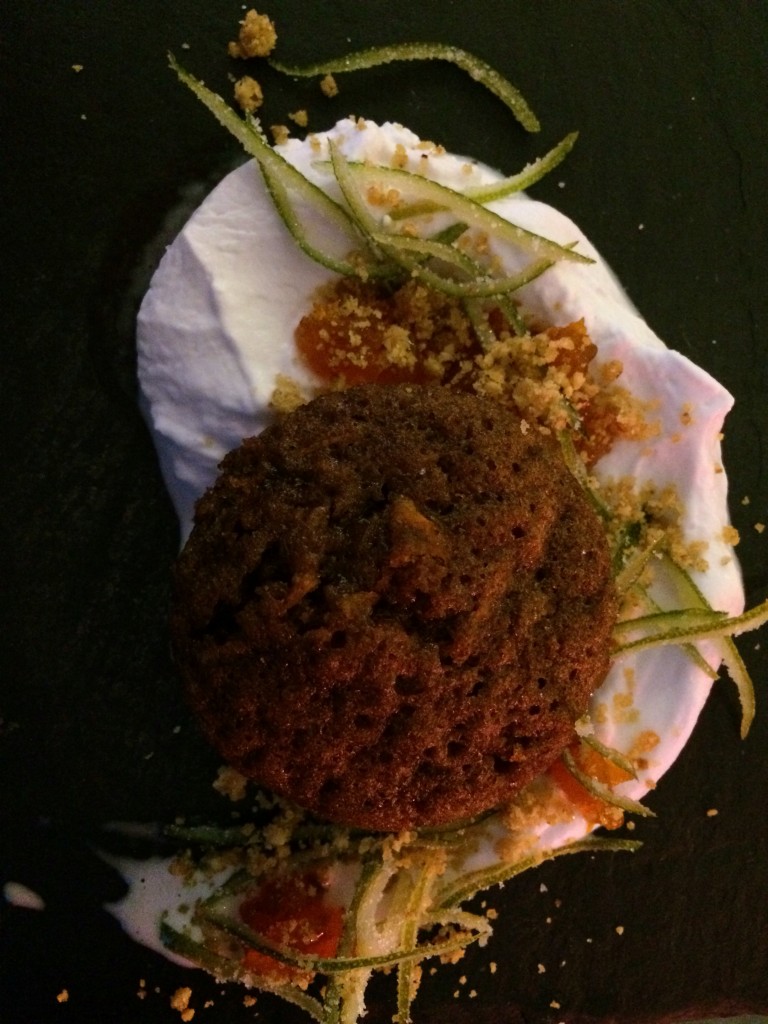 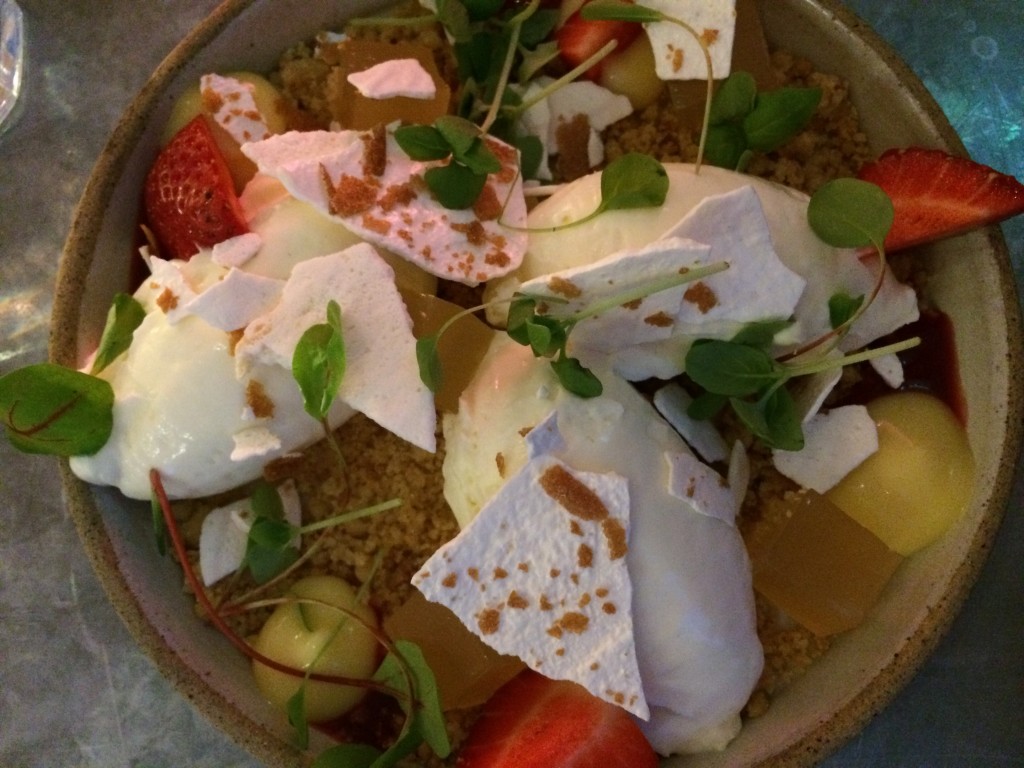 and a third pudding which I cannot for the life of me remember what it was (that will teach me to write up a post from September in March!): 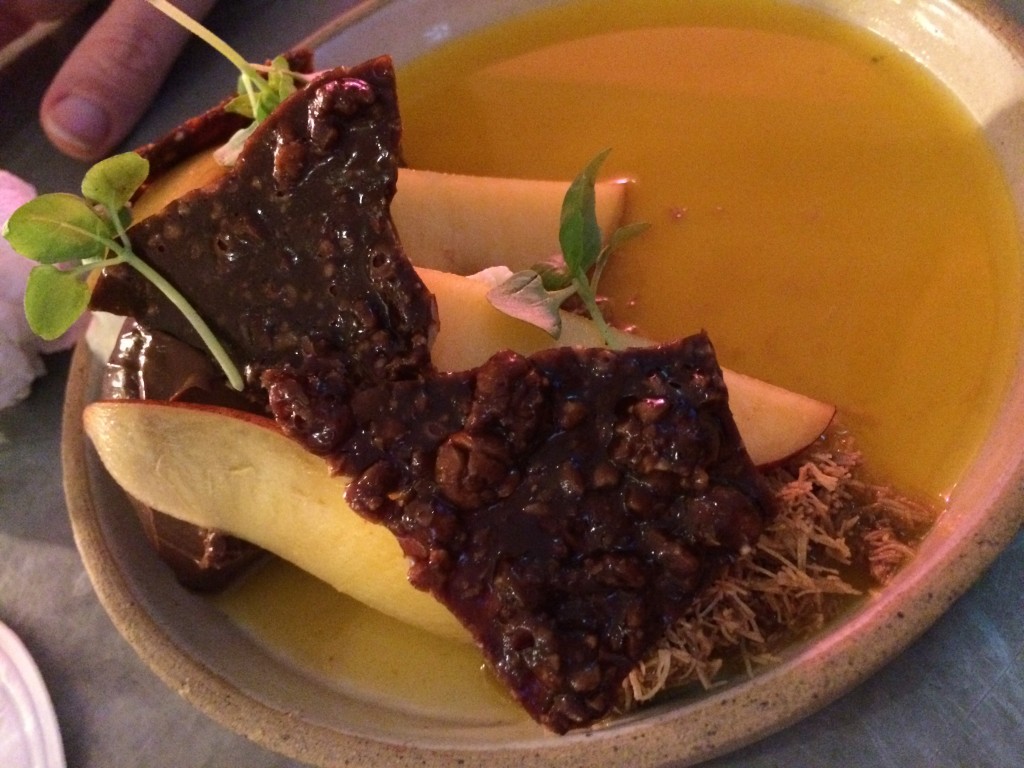 None of the puddings were spectacular, so you’d probably be better off spending your appetite on the mains, most of which were exceptional.

The Palomar is definitely worth a trip although it’s certainly not cheap (tapas-style sharing mains range from £10-15 per plate, and you need a few between you) or comfortable if you can’t get a proper table.

Next up we’ll be going J for Jamaican.

2 Replies to “I is for Israel – The Palomar”