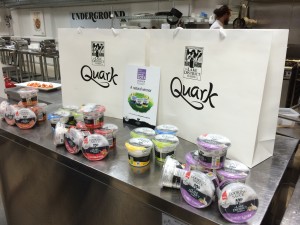 I came across Quark a few years ago when I was doing Weightwatchers to shed some pounds. All the other ladies I met were shouting about how wonderful it was because it tasted creamy despite being almost fat free, and so I found myself experimenting with Quark on their recommendation: making cheesecakes and eton mess for a (relatively) healthy pudding.

I always liked it but couldn’t find Quark in the shops very often, so eventually stopped using it. If I ever wanted a low fat soft cheese I would just go for the supermarket own-brand version of cream cheese instead.

Then a couple of weeks ago I was invited to the Underground Cookery School in Old Street by the Lake District Dairy Company, as they are launching a new range of Quark cookery sauces and wanted a few food bloggers to give them a try. 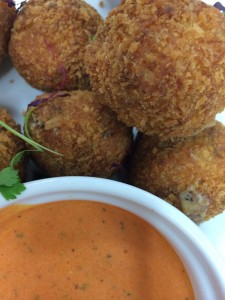 When I arrived at the cookery school I was greeted with a glass of prosecco (tick in the box) and a selection of canapes which had all been made using Quark: arancini (Sicilian style balls of rice mixed with quark, breadcrumbed and deep fried; little toasts with smoked salmon, Quark and fish eggs; and beef tikka skewers using the new tikka flavoured Quark).

We were given a brief presentation about Quark while we quaffed more prosecco and ate our canapes (the salmon and fish egg ones were my favourites, and I’d definitely make those when friends come over – the Quark is smoother than cream cheese so I prefer the texture). 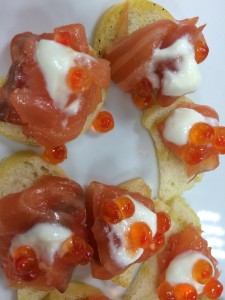 I have been trying to reduce sugar from my diet so have been paying close attention to labels, and whilst sugar is added to reduced fat cream cheese (to replace the fat and ensure you keep the lovely mouth-feel of fatty foods), it is not added to Quark, which is naturally low in fat as it is made from pasteurised skimmed British milk and a special blend of cultures.

The Lake District Dairy Co (LDDC) released their premium blend original Quark some time ago, alongside two flavoured options: vanilla and lemon. These two do have sugar, as do the new sauces, so if you are staying away from sugar in your diet then you may want to avoid them. However, the LDDC suggest these as an alternative to full fat, full sugar versions (for example vanilla yoghurt or cream cheese for a cheesecake), so they can still be considered a healthier alternative.

Later this month (so I had a sneak preview, lucky me!) the LDDC will be releasing three new flavours: garlic and herb, tikka, and tomato and basil. At the Underground Cookery School we learnt how to make some fantastic recipes with each of these new sauces, and a couple of the old ones too. Our menu was: 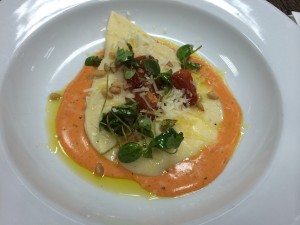 The tomato and basil ravioli was my favourite: first of all we made fresh pasta (100g type 00 flour plus 1 egg, a pinch of salt and a splash of olive oil will give you enough pasta for a generous portion for one person) and then filled the rolled discs of pasta with a spoonful of the tomato and basil Quark (which had been mixed with a little seasoning), sealed them and added them to boiling, salted water. When the ravioli rise to the top you know they are cooked.

The pasta was served with parmesan, pine nuts and a bit more Quark drizzled over the top along with some olive oil. It was delicious and I’ll definitely be making them again. I’d like to make a Quark and spinach filling for the ravioli next time. I’d do this by briefly cooking spinach and allowing it to cool completely before drying it, chopping it and adding it to the natural Quark with some freshly grated nutmeg, salt and pepper.

You could then serve the ravioli on a bed of spinach leaves (you could use rocket but I am not a fan), with the tomato and basil sauce drizzled on top, along with toasted pine nuts and a grating of parmesan. 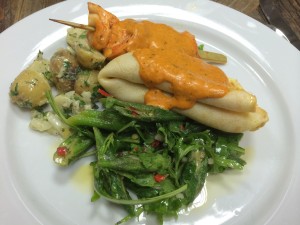 Our main course was chicken tikka skewers, which we made by first deboning the chicken (the first time I have ever done that) and then using the breast meat to make the skewers. They were simply marinated in the tikka Quark and then baked in the oven for 15 minutes.

They were served with a rather random combination of food: pancakes which had been filled with garlic and herb sauce and artichokes (delicious); okra mixed with chilli (I discovered that I am not a massive fan of okra at this point); and a delicious potato salad made with a dressing of original Quark.

I would not make that combination of food on the same plate again, but each individual element (minus the okra) was very tasty. Mixing cooked new potatoes with Quark, olive oil, Dijon mustard and parsley makes a lovely light potato salad dressing and is a great idea – when I make it myself I will also add some gherkins and some sliced red onion and salt and pepper. The skewers were also lovely and I’d be interested in trying the garlic and herb Quark as a marinade for meat and fish before baking it as well. 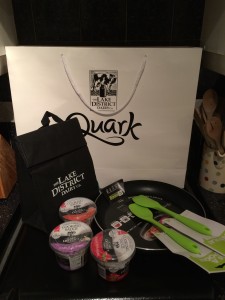 For our puddings we made ice cream with the lemon and vanilla flavoured Quarks. I have to say that these were not my favourites, as the ice cream was too sweet for my tastes, although the other bloggers seemed to really enjoy the ice cream. However, adding Quark to a custard base is a good alternative to double cream and flavourings to make a healthy treat, so it is worth a try if  you have a sweet tooth. Personally I wouldn’t add too much sugar to the custard: I’d leave the sweetness to come from the Quark.

It was a lovely evening and very educational  – I’ll certainly be using Quark in the kitchen more now. Although the new flavours won’t be in the supermarkets until later in August, I was lucky enough to be given a few free samples to play with, and I’ll be sharing my recipes with you in the coming weeks.

If you have any recipes to share for using Quark then please let me know in the comments section below.