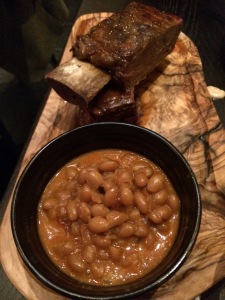 I think one of the best things I have ever done (well, in terms of feeding my greed, at least) is signing up to mailing lists of restaurants I like. It’s great when you get an email in your mailbox telling you about a new restaurant which is opening, especially when it invites you to book for the soft launch, where you sometimes receive up to 50% off your food bill.

The quid pro quo for this is that the restaurant might not yet be running to full capacity and so you may experience a few teething problems with the level of service and snagging in the decoration. What it has meant in my experience is that you order far more food than you normally would do because it’s such good value, and leave the place feeling like you won’t be able to eat again for a week (although sadly that has not proved to be the case, and I find my appetite returning with a vengeance the next day).

I’ve done this now for Jason Atherton’s Pollen Street Social, Marcus Wareing’s The Gilbert Scott, and two of Mark Hix’s Hixter venues. So when the email from ‘Friends of Marcus Wareing’ (yes, I can pretend I am one!) popped into my mailbox a couple of weeks ago inviting ‘friends’ to book for the soft launch of Tredwell’s in Covent Garden, I was delighted and excited, and immediately emailed back my preferred dates. 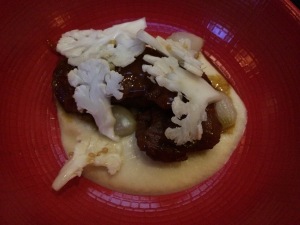 I didn’t hear anything back from the restaurant by the weekend as promised, and so sent a couple of tweets which were dealt with extremely promptly (especially as it was their opening weekend and they were hosting London Fashion Week parties) … but still no table. When I emailed the restaurant again on the Monday afternoon of the launch, I found that I had been unsuccessful in getting a table. However, the very nice Guest Relations Manager Lise had just had a cancellation and she offered it to me – hooray!. After a bit of faffing about, rejuggling of diary, and then having to wait for Andrew to get home so that I could tell him to turn around and come straight back out again, I confirmed the reservation, and made my way to Covent Garden excitedly for dinner. 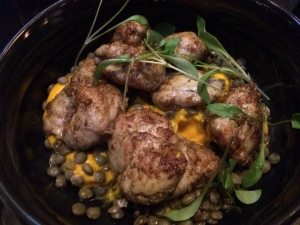 After already refurbishing the Berkeley restaurant which bears his name, Marcus Wareing has gone a further step to reduce restaurant ‘stuffiness’ by launching Tredwell’s, which he has planned to be cheap and accessible. The menu is British through and through, and the decor is classic brasserie. Apart from the tables being a bit too close together for my liking (I found the same in The Gilbert Scott), I thought the restaurant was stylishly decorated, light and airy, with music at the right volume so there was no need to shout. Apparently there are 3 levels including a basement bar, but we stayed at street level so didn’t get the chance to explore. 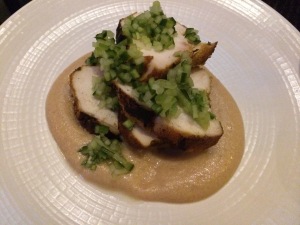 The menu offers a selection of small and large plates, and the idea is that you choose a selection of dishes to share. Normally I detest this kind of concept as I don’t like sharing small portions of food (I am so greedy), but it works very well at Tredwell’s. Our friendly waiter proposed that we order two small and one large dish each: even at full price this would not break the bank. Obviously we ordered even MORE food than was suggested (50% off makes it irresistible not to order more), and were subsequently utterly stuffed (although, ahem, still found room for pudding).

The waiter explained that the food would arrive as it was cooked, so we wouldn’t receive our meal in the traditional starter and main course format. The small dishes came in two waves first: although we genuinely could have eaten everything on the menu, we chose slow cooked smoked pork cheeks with pickled cauliflower, lamb sweetbreads with lentils, confit cod with sweet potato and chicken with peanut. 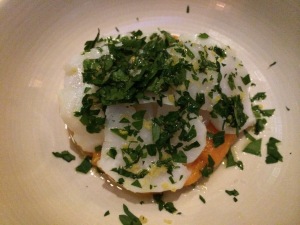 It was all delicious, and miraculously Andrew ate and enjoyed both the cauliflower and sweet potato accompaniments (normally he would outright refuse to eat either). At around £7 each at full price, the portions were extremely generous and ideal for sharing between two people.

The pork cheeks were sticky and unctuous and came on a bed of cauliflower cheese puree (comfort food at its best), with slices of pickled cauliflower on top to cut through the richness. This was my favourite, followed by the lamb sweetbreads which were caramelised on the outside but tender inside. Andrew’s favourites were the sweetbreads followed by the cod confit, which was melt in the mouth tender and heavily flavoured with lemon and garlic. The chicken with peanuts was effectively a chicken satay and very tasty.

After that we were already quite full, but had ordered the most expensive large dish on the menu of slow cooked short ribs with baked beans (which I thought was expensive at £38), and lamb chops on minted beans. The ribs could have been another challenge for Andrew as the bones were sticking out of the meat Fred Flintstone-style, but they pulled out like a knife through butter, so he was happy. The meat was superb and the beans were not overly sweet. Then we also had four perfectly cooked lamb chops between the two of us which were juicy and well flavoured, with lovely al dente minty green beans.

On top of these massive portions of food (already a very filling meal for two, so if you don’t have such a huge appetite you could go against the advice of Tredwell’s and just order one small and one large dish each – you can always choose more later as the service is very speedy from the kitchen), we had ALSO ordered a portion of shoestring fries and some smoked chicken croquettes as they sounded gorgeous. These sides both arrived alongside the mains and were our least favourite dishes of the night. 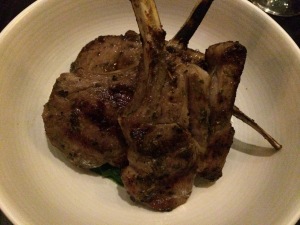 I am not sure if it was the combination of salty chips and salty croquettes, but everything just tasted a bit too over-seasoned and so we enjoyed neither. As we were stuffed by this stage anyway, we were happy to leave both after taking a token bite.

But, of course, there is always room for pudding, especially when you are paying half price. As Marcus is well known for his puddings, I was expecting a lot from the dessert menu. At The Gilbert Scott I’d been blown away by an eccles cake with cheddar cheese ice cream, so much to Andrew’s disgust I chose Tredwell’s pain perdu with maple cream and bacon. He went for a more restrained option of coconut yoghurt with fruit salad. 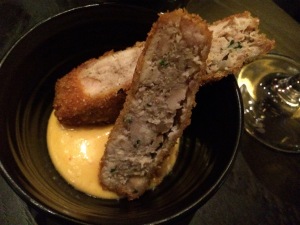 My pain perdu was nice enough, and the maple cream (a semi freddo) was delicious, but the crunchy bits of bacon were a bit too bacon-y and made me feel like I was eating pain perdu which had been fried in a dirty bacon pan. I wouldn’t say this is the fault of the restaurant, as some people adore that combination of sweet and salty, but in this instance it wasn’t for me and I wouldn’t choose it again.

Andrew’s coconut yoghurt was deliciously creamy, but the unusual serving bowl meant that half the fruit was lost down the stem of the glass and so he couldn’t eat it all. 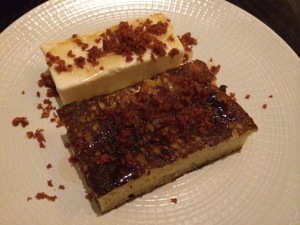 Apart from a few little misses, Tredwell’s is most definitely a hit, and Andrew and I will 100% certainly be back again. Although it’s a great venue for two people, I also think it would be brilliant for a night out with a group of friends. There’s also a lovely cocktail menu and a good wine list with very reasonably priced wines, and the food at full price is still great value for money. 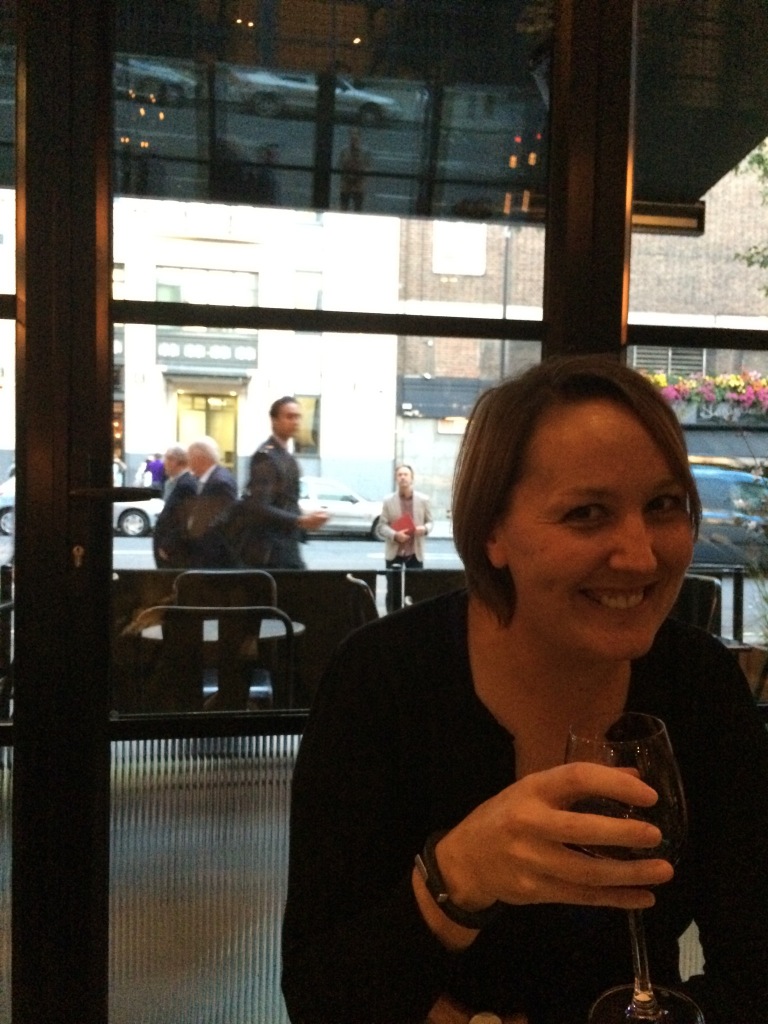