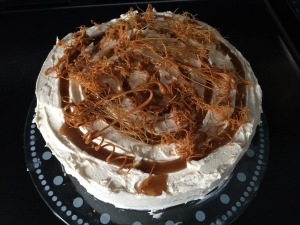 Wow – time is really flying, and I am starting to get behind on my Bake Off challenges. I did actually make this little beauty the weekend after episode 6 aired, but have struggled to find the time to write it up.

So week 6, if you don’t remember, was European week. In between Mel and Sue practicing their dodgy Euro impressions, we had yeasted Euro-cakes, an Hungarian Princess Torte and tiered tortes finished with caramel.

The yeasty bread/cake making malarkey sounded a bit too much like hard work, and the Princess torte sounded a teeny weeny bit like a heart attack on a plate. I wouldn’t have minded but the top was covered in yucky green marzipan which put me off, and I couldn’t think what you would replace it with to hold in all that cream, so I decided on a layered torte. 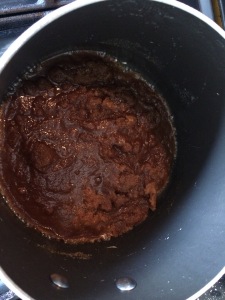 I found this recipe for a spider-themed (why?!) salted caramel torte with sugarwork and thought it looked perfect for the challenge, although I was scared at the potential for 1. seriously hurting myself with flying burnt sugar; and 2. destroying my kitchen with flying burnt sugar. It worked out though, and I’ll definitely be giving sugarwork a go again. I’ll be like James Martin soon – spinning sugar at every opportunity.

Don’t be put off by all the stages you have to go through to make this cake. It’s not as difficult as it might sound and in terms of sheer deliciousness it’s worth it in the end.. It’s a huge cake, although I think it would probably keep well for 5 days (mine didn’t last that long because I took it into work … it lasted a couple of hours!).

So you can follow the original recipe here if you want to, or if – like me (and probably everyone else in the world who is not a professional pastry chef, surely?) you don’t own 4 identical sized sandwich tins, take a look at what I did below.

The icing is too sweet for my tastes but my colleagues loved it, so I have kept to the original amount below. I ignored all the nonsense about spider decorations etc. Those nasty buggers are already invading the house (ignored by our useless cats) so I don’t want to think about them when I am eating lovely cake, thank you very much. 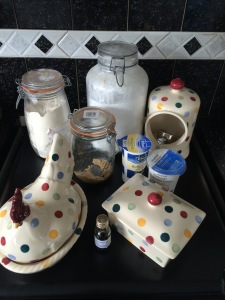 So I got started by making the salted caramel sauce, which is unbelievably simple to make, and I’ll be using it to top ice cream at every opportunity in future. You melt the butter and sugar in a saucepan until it starts to bubble (swirl it around so it doesn’t burn). Then whisk in the double cream and sea salt until well combined, and taste it to see if it needs more salt (mine did). Try not to eat it all while you are making the sponge. 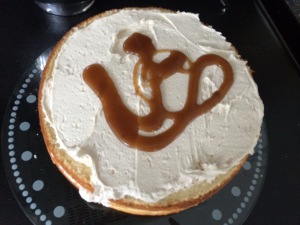 The sponge was a bit of a pain in the neck to make, and didn’t turn out light and airy as I’d hoped – in fact it barely rose and when I sliced the cake in half it looked a bit underdone, even though the skewer had come out clean. I suspect that’s the problem you will  have if you divide the mixture into two cake tins instead of four, but seriously – who has all those cake tins? I am obsessed about collecting nonsense like that to go in my kitchen and I don’t have four which are the same size! Looking at the picture in the original recipe, I think the cake is very dense anyway to hold all that heavy buttercream, so don’t be surprised if you have the same issues as me. It certainly doesn’t affect the flavour, and if anything I enjoyed the dense smoothness of the cake. 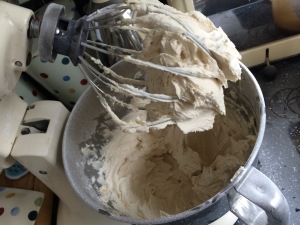 So, getting back to the recipe, what I did was beat together the butter and sugar until light and whippy. Then I added the beaten eggs slowly (to try and stop the mixture splitting). Mix the buttermilk (annoyingly that amount is one and a half tubs) and vanilla together, and then add sifted flour and the buttermilk mixture to the eggy butter slowly – adding first a bit of flour, then a bit of buttermilk, and so on, until it’s all gone.

I divided the (very tasty and rich) mixture equally between my two large tins (I just lined the bottom of each tin with some greaseproof paper and buttered the sides), and baked them in the 170 degree oven for around 35 minutes. I checked after 25 and the cakes were still quite raw in the middle and so I thought they would take much longer than they did to finally cook, but (luckily) when I checked again at around 30-35 minutes they were done. 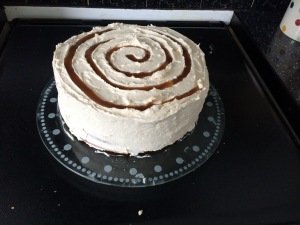 While the cakes are cooling you can add the buttercream. Beat the butter and icing sugar together (anyone know how you can stop the icing sugar decorate the house when you turn the mixer on?) until light and fluffy and then add the vanilla bean paste (actually, I didn’t have any so used vanilla extract) and pour in some of your cooled salted caramel sauce. I added around half of the sauce to my buttercream but I did end up with some left at the end so could have got away with adding more.

Then you can make your sugarwork, which I was dead scared about but which was surprisingly easy. You just heat the sugar in a pan (no water etc) until it melts and bubbles, while you line your kitchen with baking paper (hot sugar sticks!!!). Remove the cats from the kitchen to avoid accidents, and then get a wooden spoon and take some melted sugar and flick it back and forth over a lightly-oiled knife steel to make spun sugar. I also tried to make little spirals by wrapping strands of sugar around the steel but I only managed one! I realised there is a very small window of opportunity when the sugar is the right temperature to make shapes with, and I was too inexperienced to exploit that opportunity to its full potential. 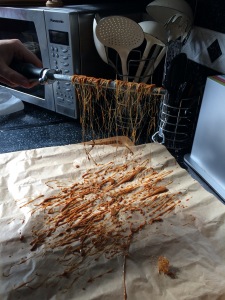 Top tip, which I am sure I learned from Delia: when you inevitably end up with a saucepan full of hardened melted sugar, fill the pain with boiling water from the kettle and put the saucepan back on the hob – the sugar will melt into the water and then you can tip it down the sink (make sure you have used enough water to fully dilute the sugar!).

So, now all your components are ready and you can build your masterpiece. Slice each of your cakes in half through the middle so you end up with four round cakes (it doesn’t matter if you make a bit of a mess as everything will be covered with delicious icing and caramel). Put one cake on the serving plate and cover with buttercream and a generous drizzle of salted caramel sauce. Repeat with the other layers. When you put the final cake on the top, cover the top and sides with a generous layer of icing. I then made a spiral groove around the top of the cake and poured in more salted caramel sauce, and then topped with my sugarwork creations.

I was amazed at how brilliant I had made it look despite having basically no decorating skills. I wish I’d had some salted peanuts in the house as a few shards of peanut brittle (melted sugar mixed with the salted peanuts and left to cook) would have been lovely on top of the cake.

My sugarwork had melted into caramel by the next day, but that didn’t stop my colleagues munching their way through the cake, which they all declared delicious. Definitely a showstopper!

The next episode of Bake Off (which was shown on TV last week!) is a pastry special, including eclairs, which I love, so I think I might have to try to replicate my favourite ever pudding – an apple and caramel eclair – from the Berners Tavern. 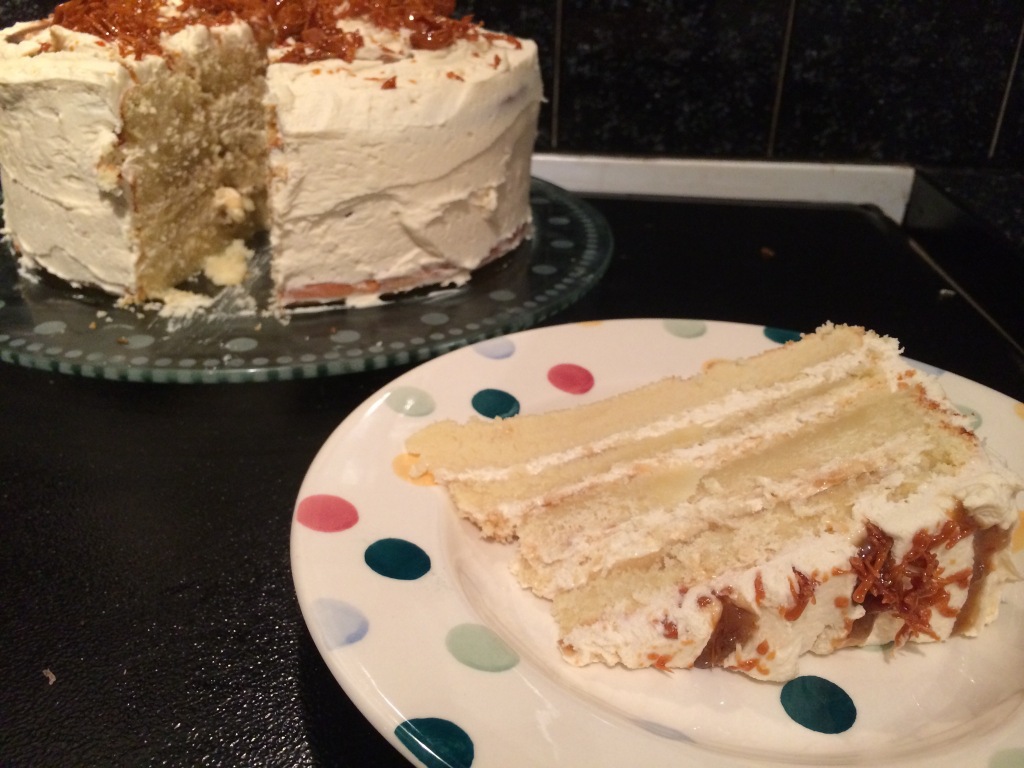