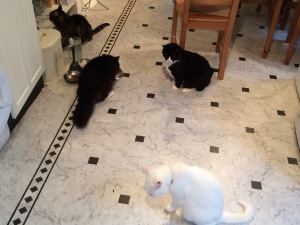 If you don’t own cats (or, rather, if a cat hasn’t decided to make you its personal slave), then you probably think that cats eat cat food, right? Wrong! What cats most want to eat in the world is whatever you are enjoying at any particular time. And they will do anything they can to get your food off you.

I have to confess, I probably haven’t helped matters with my cats. When they were kittens I thought it was quite cute when they licked a bit of cream off my finger. It got less cute as they got older and I had to physically restrain them from my plate while I ate my dinner as quickly as possible. Otherwise they would literally just stick their face into my plate and help themselves. Betty actually jumped into a dish of lasagne once, and then ran around the house, decorating the carpet with tomato-red paw prints.

Now, our cats eat a predominantly dry food diet (a prescription diet – thanks to Henry’s tendency to grown crystals in his bladder – and very expensive), occasionally supplemented by a pouch of wet food as a treat. But I have no doubt that Trampy and Betty are trawling the cat food bowls of neighbouring houses, as they both have expanding waistlines which have gotten us told off by the vet more than once. 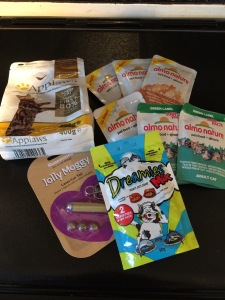 Due to their prescription diet, the cats have the same food every day, and I never considered varying that until I got an email from Amy at Pet Shop, asking if I’d like to receive a little hamper of goodies for the cats. I was a bit surprised as I didn’t think I had featured the cats too heavily on Its not easy being greedy, whereas I have quite heavily featured my desire for companies to send me chocolate. But I wasn’t going to say no to a free meal for the kitties, despite being a little dubious about whether they would eat another brand of food.

A little parcel arrived a few days later with a selection of Almo Nature wet food pouches, including some raw food ones; a pack of Dreamies treats; and a bag of Applaws dry food. Amy also enclosed a little laser pen cat toy. 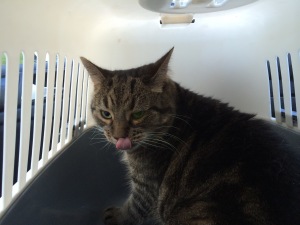 It was especially nice to receive this pack of goodies as I’d just had to rush Betty to the vet as she had a sore eye, and it turned it she’d scratched it quite badly and it had ulcerated, so was on eye drops three times per day and painkillers once per day. The vet had stained her eye with a florescent dye to check how deep the scratch was (it was deep) and so she had bright orange gunk pouring out of it, and was generally feeling very sorry for herself (when I saw the vet bill I was also feeling very sorry for myself). 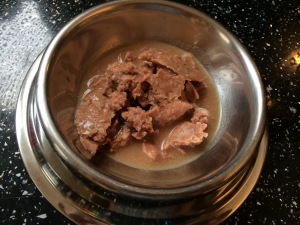 So we got back from the vet and I opened up one of the Almo pouches especially for her. The contents looked a bit like tinned tuna with lots of liquid, and it was quite hard to get it out of the pouch so I had to spoon it out. It didn’t have a terrible smell (don’t get me wrong, I wouldn’t want to go out of my way to sniff it, but it wasn’t as bad as some cat food), and Betty seemed to realise she was in for a treat as she was mentally weaving around my legs, distributing orange dye everywhere.

I posted a video of her eating it to Vine so you could see how much she loved the food – you need to have the sound on as she’s lapping it up like she has been starved. Then, of course,  I had to let Alfie and Henry try some – here’s their little video as well. Unfortunately, Henry was so greedy that he ate too quickly and puked most of it back up again (a little habit of his since kittenhood which is really quite annoying), but that can hardly be blamed on the food.

They also liked their Applaws dry food – I put some in a bowl next to their usual dry food and they ate it instead of their normal food.

And as for the Dreamies, well … anyone who has cats will know that they adore treats, and these ones were like cat crack for them. Once again, a video can express the greed of Betty better than I can explain it, so here’s a final video of her snatching for a Dreamie (and nearly taking my hand off in the process, hence my little yelp!).

So the verdict from the cats is overwhelmingly positive, and I’ll definitely be buying some of the Almo Nature wet food for them. It’s around 65p per pouch on Pet Shop’s website, which is nearly 10p cheaper per pouch than my usual Royal Canin urinary tract food, although that’s for 100g instead of 55g for Almo Nature’s pouches, so it doesn’t represent such great value for money.

Pet Shop were really nice to deal with – they offer free delivery on orders over £19.99, and it’s not difficult to reach that amount when you have 4 cats to buy cat food for! As I order my cat food via Fetch, which is part of Ocado’s delivery service and allows me to choose my delivery time to coincide with my supermarket delivery, I probably won’t need to use Pet Shop myself, but you can take a look at their website here to see if they could be suitable for you.

And if anyone would like to send the cats any more food to try, here are their preferences: 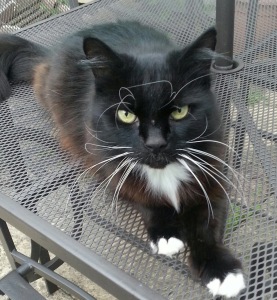 Henry: he likes mushy peas (Batchelors original style – he’s not so fond of the chip shop ones); Fray Bentos pies (Andrew’s favourite, I can’t stand them); and ham (if he has disappeared, then opening a packet from the fridge is a guaranteed way to get him running over, accompanied by his gurgly ‘ham miaow’). 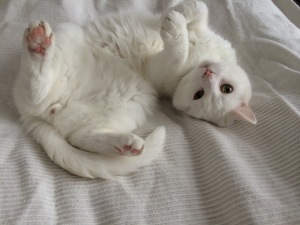 Alfie: any type of fish, especially Youngs wholetail scampi. He does love fish from the fish and chip shop as well, but without the batter. He is flexible: cod or haddock is fine for him. Otherwise he’s not particularly greedy … and that’s probably why he’s the only one of our cats who has never had a weight problem. 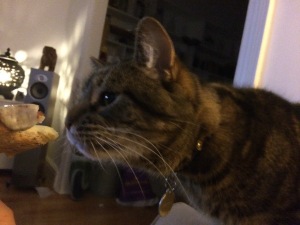 Betty: she will literally eat anything, but her special passion is saved for dairy products. When she hears a spoon scrape across a bowl, she knows that there is a high probability of bowl-licking opportunities, and so comes along to try her luck with angel delight (strawberry flavour only); custard (homemade or Birds); ice cream; cream (she’s not overly fond of extra thick cream); and rice pudding (homemade or Ambrosia). 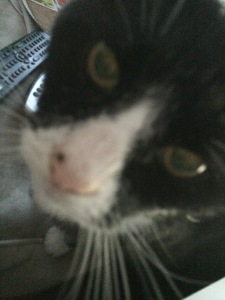 Trampy: having been a stray, Trampy’s not fussy – he’ll take his chances when he gets them. He’s not one for begging though, and doesn’t even seem bothered by cat treats. However, he has an impressive girth which must come from stealing food out of the bowls of other cats (or, possibly, off the plates of our neighbours).