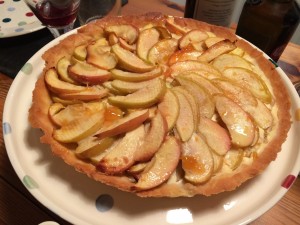 Pies and tarts were the subject of this week’s Bake Off, and Norman (who practically dredged the entire studio in icing sugar when he ‘dusted’ his tarte au citron) was booted off, despite the fact that they are one baker down now that Diana has pulled out of the series due to illness.

I think the bakers who are left are all potential winners, although my favourites are Martha and Richard. Kate is also very impressive (I loved the rhubarb swirl in her rhubarb and custard tart), and Nancy is consistent each week.

After last week’s disaster with my non-self-saucing self-saucing pudding, I was keen to make a success of this week’s challenge. Our Canadian friends (including Steph of Nanaima bars fame) were coming over for dinner for the first time, and so I wanted to impress them with a lovely dessert as well, so I eventually chose to make a Somerset apple tart, taken from the Great British Bake Off’s latest cookbook, and tweaked by me with a few little shortcuts to make life easier! 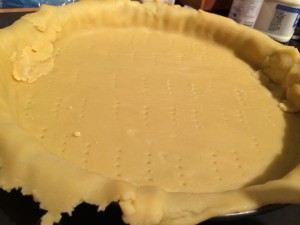 At the same time as making the tart, I also had to make a cake for work elevenses (I made a new Nigella recipe of chocolate sheet cake, which she has released on her website as a thank you to fans for reaching 1 million Facebook likes), a pasta sauce for the Canadians, and savoury biscuits to have with our cheeseboard (recipes to follow soon). It was a busy evening, but the tart was really quite simple to make and would have been even easier if I hadn’t been juggling various other bakes. 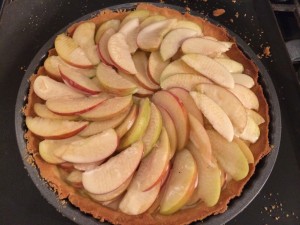 First of all I made the pastry, in a food processor rather than by hand as described in the book. I was a little bit concerned that it might make the pastry tough but it was fine: beautifully short and crumbly (and no soggy bottom!). After it had rested in the fridge, I rolled it out between two sheets of clingfilm (a tip I had picked up from the latest episode of the Bake Off as it means you don’t have to add any extra flour to the pastry), and lined my new tart tin (I have never made a fluted tart before).

The pastry needs to be pricked, lined with paper and cooked with baking beans weighing down the pastry for just over 10 minutes. You then remove the baking beans for a final blast in the oven, remove it from the oven and trim the pastry, and then get on with the filling. 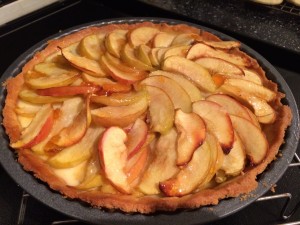 Firstly you need to slice your apples finely. The book recommends peeling and coring the apples but I didn’t bother peeling them and it was fine. You need to lay them out prettily in the tin, and then cover them with a custard mix made with Somerset brandy (which I happen to have in the house, as we bought some when we visited family in the west country).  You then bake the tart and finish it with an apricot glaze once it is out of the oven.

My apple tart was delicious, but looked nothing like the one in the book. Personally I think there is not enough custard mix specified, and if I made the tart again I would increase the amount of custard (I reckon I could have gotten away with 1/3 more of custard). And as much as I liked the pastry, next time I’d flavour it with lemon as with Marcus Wareing’s custard tart – that’s a much nicer flavour to go with the apples and custard. 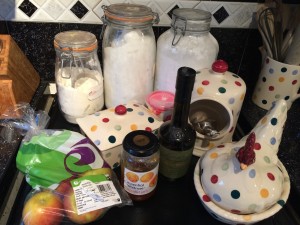 Make the pastry in a food processor by putting the flour, salt, icing sugar and butter into the processor and blitzing until you end up with something resembling fine breadcrumbs. Add the egg yolk and mix again until the mixture starts to come together. I needed to add a couple of tablespoons of cold water to the mixture to get it to mix into a smooth dough, but add the water cautiously as you may not need so much. Wrap the dough in clingfilm and chill it in the fridge for 30 minutes.

Lightly oil a 23cm fluted pie tin. Roll out your pastry between two sheets of clingfilm until it is as thin as you can get it (we don’t want soggy bottoms) and large enough to line the tin (patch up any holes with the excess to ensure when you add the custard it doesn’t leak). Once you have lined the tin, prick the pastry with a fork and put it back into the fridge to chill for a further 15 minutes. Preheat your oven to 195 degrees. 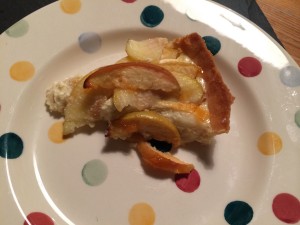 Quarter and core your apples and thinly slice them. Lay them in your pastry case working from the outside in, so they look pretty. Whisk together the cream, egg, sugar and brandy, and pour it over the apples evenly. Then bake the tart in the oven for 35 minutes until the custard is set and the apples are lightly coloured. Immediately brush the top of the tart with some watered down apricot jam to give a lovely glaze.

I served mine cold the next day, and it was lovely.