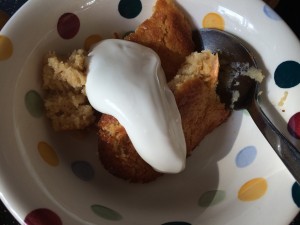 Oh blimey, what was going on with the Bake Off this week? #Bingate made for fantastic viewing, and I am sure that the programme-makers were delighted to see how Twitter went ballistic over ‘Dirty Diana’ and her apparently sabotage of Iain’s baked alaska. Has a baking show ever had so much fuss? I doubt it …

I think it’s fair to say that the programme was edited in such a way that Diana looked like she didn’t give two hoots about spoiling Iain’s chances of getting through to next week’s Bake Off … but … hmmmm … she really did come across as a bit of a meanie. Unfair editing or not, she left out his ice cream and she didn’t apologise – she could have said sorry at least!

Anyway, sounds like Diana has now left the series (due to illness? or is it a conspiracy?), so maybe Iain will be back on Wednesday? Until then, I can share with you my own Bake Off Challenge experience. I definitely had a Bake Off FAIL, but it wasn’t bad enough to put in the bin. 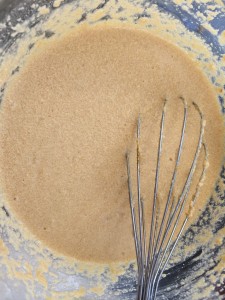 So, the options for this week were the signature bake of self-saucing puddings, such as sticky toffee puddings or fondants; the technical challenge of Mary’s tiramisu cake; or the showstopper round of baked alaska.

This was a difficult week for me because Andrew doesn’t like sticky toffee pudding (I made a fabulous one before, which you can see here) or chocolate fondant (Nigella’s molten babycakes are a great one if you are interested, recipe here), tiramisu or meringue, so I was a bit stuck. I didn’t have anyone coming over for dinner to palm off some puddings onto, so desperately trawled the internet to try and find a saucy pudding which did not have chocolate as its main component.

I did see a couple of caramel apple self saucing puddings, but I was worried they might be a sticky toffee pud in disguise so discounted them. Eventually I found a lemon self saucing pudding on Delicious magazine’s website and decided that would have to do. Andrew said he’d probably eat it so I ordered the ingredients from Ocado and then cracked on with it. 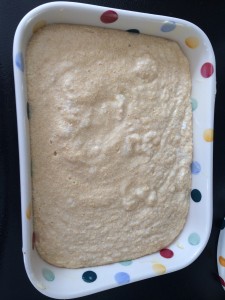 The pudding itself is not difficult to make, but does require a few bowls as you have to separate eggs, whisk egg whites and separately cream butter and sugar. Recipes that require lots of dishes annoy me as it creates washing up, even though I have a dishwasher and am not really going to be washing bowls up. It creates a mess as the washing up piles up outside the dishwasher!

So as I had to whisk the egg whites into soft peaks whilst I separately creamed the butter and sugar, I set the KitchenAid freestanding mixer on for the eggs, and used my KitchenAid hand whisk for my butter and sugar. Big mistake. The hand whisk is much too powerful for the task and half the eggs and sugar whipped themselves straight out of the bowl and down my top. Lovely. So I had to give up on that and use a hand whisk, which was a lot of effort as earlier I’d spent several hours pruning (culling) the bushes in the garden (jungle) and my hand was aching. So now I was in a bit of a mood.

Eventually I got the butter and sugar creamed, along with the lemon zest (miraculously I didn’t grate my knuckles this time while I zested lemons so that was a win at least). Next step is to add the egg yolks, one at a time, which was simple enough. Then you add milk and lemon juice, and are warned that the mixture will look curdled … but this is okay as that’s how it is supposed to look. 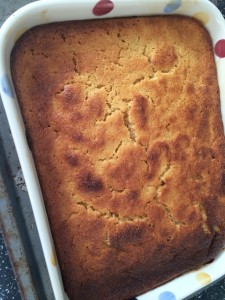 Well, it looked revolting. This is probably the first time I have ever not wanted to lick the bowl for a cake mix. It looked even worse when I folded in the egg whites, and I had low expectations for how it would end up when it came back out of the oven.

In fact, by the time the pudding was baked it looked quite nice, and smelt of fresh lemons which was appetising. The recipe says to serve the pudding immediately, but I didn’t want to eat it when it was piping hot, and so left it for around 30 minutes to cool a little.

I guess that was my mistake , as by the time I spooned out some pudding for us, there was no obvious sauce, just a rather wobbly, soggy sponge, which tasted nice but had a strange texture (a bit like bread pudding).

So, had I been on Bake Off last week, I probably would have been booted off, as my effort was pretty rubbish. I wouldn’t bother making this pudding again as there are nicer things to make with lemons, sugar, eggs and flour, but if you manage to make more of a success of it than me, let me know in the comments section.

Here’s the recipe I found on the Delicious website, and below is what I did. 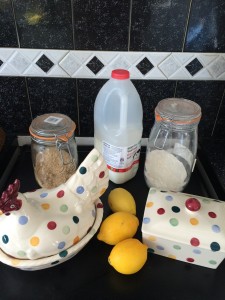 Lightly grease your baking dish with some butter. In one bowl, whip up some egg whites until they reach soft peak stage. In another bowl, cream the sugar and butter and lemon zest. Once well combined, add the egg yolks one at a time. Then add the flour, and once that’s completely mixed in add the milk then lemon juice. At this point the mixture WILL look like it is ruined and you’d rather chuck it in the bin than eat it but don’t worry, that’s normal (I kid you not).

Fold in the egg whites (this makes it look even more disgusting) and then pour it into your dish and bake in an oven at 160 degrees for 40 minutes. The top will be golden and firm, although I felt a bit of a wobble underneath, like a perfectly cooked brownie. 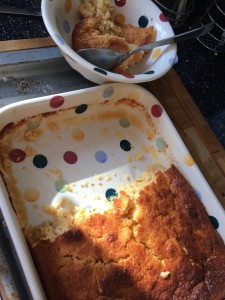 Serve immediately, and hopefully you might find you get a bit of sauce.

Next week’s Bake Off is all about TARTS! Mmmmmmm. Custard tarts (I have an awesome one here if you want to give it a try), pears wrapped in pastry (I like the idea of this one) and multi-tiered tarts (do me a favour – that’s not going to happen in my kitchen!). Will Iain be back to have another go?