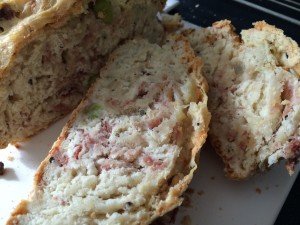 I am running late with my Bake Off challenge this week, as I spent the bank holiday weekend in Paris for the Rock en Seine music festival. So instead of baking bread, I was eating sausages, aligot, Paris-Brest and confit duck, and watching Arctic Monkeys, Prodigy, Queens of the Stone Age and Blondie rock Paris. Oh yeah, might have drunk a little bit of wine too.

Anyway, back to the Great British Bake Off. Week 3’s episode was all about Paul Hollywood’s favourite subject: bread. First up the bakers had to make 12 rye bread rolls as part of their signature challenge. Then the technical challenge was to make Paul’s ciabattas. Finally the showstopper bake was filled bread.

I am not a fan of rye bread so decided against rolls, and would have liked to give ciabattas a try but was a bit time-short. The deciding factor in making filled bread was that we had bought lots of ham and cheeses back from Paris and so I wanted to try and use up some of that in a tasty loaf of bread.

After trawling through my cookbooks and various recipe sites online, I eventually came across a Lorraine Pascal recipe for a ham, cheese and chive loaf. I don’t have any of her books and am not a huge fan of her TV shows, but the loaf looked extremely quick and easy to make, so seemed to be a winner for me. 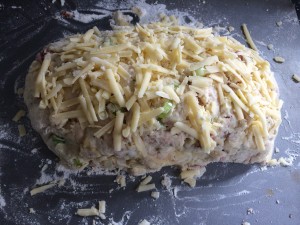 This loaf of bread is quite dense when cooked, and uses baking powder instead of yeast as it’s rising agent. The benefit of this is that it doesn’t need kneading or proving, so you can get the idea into your head to make bread and be eating a loaf just one hour later. Of course, that can be a bit dangerous for a carb addict like me!

I tweaked Lorraine’s recipe a bit, and actually would make some further updates to it if I made it again (which I probably will). The loaf tasted too garlicky for my liking so I’d probably leave out some of the garlic powder next time, and up the quantity of mustard powder (I have reflected this preference in the recipe below), or even add a touch of paprika as well.

I also wasn’t fond of the crusty cheese on the outside of the loaf so I wouldn’t bother sprinkling extra grated cheese before baking next time as suggested by Lorraine.

The original recipe uses baked ham, cheddar cheese and chives. This time I used parma ham, comte cheese and spring onions. I think any combination of meats and hard cheese would work very well, and I am sure the basic recipe could be tweaked to include a few nuts and dried fruit for interesting combinations.

Really, feel free to use any combination of flavours to make your bread – just make sure the filling is in small pieces so it can easily be combined into the dough. 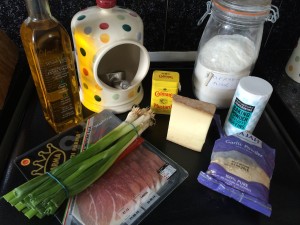 Put all the dry ingredients (flour, baking powder, salt, garlic powder, mustard powder and pepper) into a bowl and mix them together, then add the chopped ham and grated cheese (or whatever fillings you are intending to use). Once combined, add the water and olive oil and mix everything together until you have a soft dough. I didn’t need any extra liquid for this but if you do, add water cautiously as you want something which resembles a soft scone dough.

Place on a floured baking tray and shape into a bloomer or a round loaf. Score the top of the bread with a sharp knife and bake in an oven which has been pre-heated to 180 degrees for 45 minutes. I took my loaf out of the oven, turned it over and tapped the bottom to check for a hollow sound to indicate the loaf was ready, and 45 minutes was spot on for me. 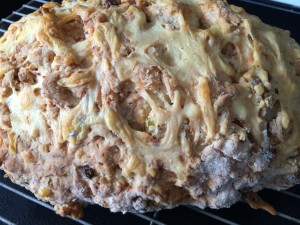 The loaf is delicious if sliced and devoured while still warm, but I also ate a bit slice the next day and it tasted fresh and deliciously doughy. I suspect the loaf won’t last too long, as Irish soda bread which I have made before using the baking powder method tended to harden quickly. I have frozen the other half of my loaf otherwise I’d probably scoff it all in one go!

The next episode is all about desserts, and as we already know, there was a baking scandal in the tent. Self saucing puddings, tiramisu cake and baked alaska all sound delicious, but not when the tent is like a sauna … #bingate here we come.