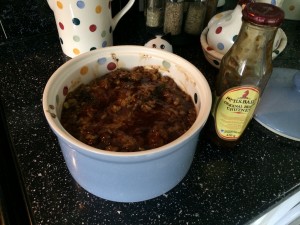 I like to think of myself as being quite adventurous in the kitchen (by which I mean that I am adventurous as a cook, not that I have a climbing wall in the kitchen or abseil down from the bathroom each morning), but there are a few food combinations that just leave me cold, and I have always avoided making and eating them.

I think regular readers of It’s not easy being greedy know that I hate mushrooms, rocket and marzipan, so I avoid those like the plague. I may not have shared that I have quite an aversion to sweet food like dried fruit mixed in with savoury food like stews. I can just about cope with prunes or apricots in a tagine with lamb (although I’d probably pick them out if no-one was looking), but I would never eat coronation chicken if it had sultanas in it, and I read a recipe for grapes with chicken once which turned me a bit green.

I will chop up an apple or pear to go into a stew – the fruit usually disintegrates and just adds a touch of sweetness to the dish which I like – but generally will completely avoid the classic combination of sweet and meat.

Plantains were also on my naughty list, but I discovered at our recent Ecuadorian Alphabet Adventure that it does not in fact taste of mushy banana, and I didn’t hate it like I assumed I would (although Andrew would never consider eating one so it’s not like I am going to start cooking plantain at home). 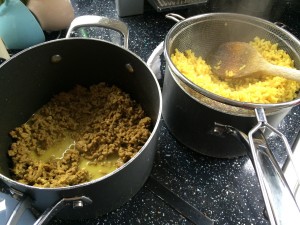 However, the most horrible, disgusting, heave-making dish that always made me feel a bit sick at the thought of it is the South African favourite, Bobotie (only topped by the idea of mushroom risotto – yuck!). Just listen to the description of it: minced beef or lamb, cooked with spices and dried fruit (yuck), layered with custard (double yuck) and slathered in sweet chutney (triple yuck). Each time I heard about bobotie, I would tell myself (and, indeed, anyone who would listen – including, shamefully, my South African friends The Hubbles) that it sounded utterly disgusting and a morsel of it would never, never, ever pass my lips.

When at work one day a colleague told me that a member of his team (a South African girl) had bought in a bowl of bobotie to share with her colleagues, I immediately launched into my usual diatribe against bobotie and why I knew it to be hideously disgusting and how anyone who ate it and liked it must be at least a bit weird.

You can probably guess what happened next. 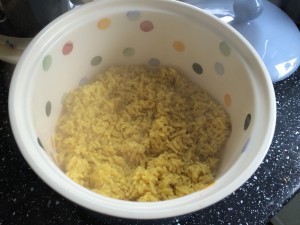 Lee-Ann, who had toiled in the kitchen to produce a huge bowl of bobotie for her colleagues, came around to see me and demanded that I try her bobotie to see how wonderful it really is.

Of course, I couldn’t refuse – I may be rude about other people’s food, but I am also a coward. So I trotted after her, feeling like a total cow about being so mean, and prepared myself to be nice about something I knew I would detest (not only nasty and a coward, but a liar as well!).

Again, you can probably guess what happened next.

I loved it. Completely and utterly loved it. Lee-Ann had used my favourite lamb instead of the more traditional beef to make the bobotie. She doesn’t like dried fruit so didn’t mix that in with the lamb. She mixed yellow rice in with the meat instead of serving it separately. The custard (not sweet) wasn’t a separate, distinct, wobbly layer in the dish but was kind of mixed into the lamb and rice, and the chutney on top was just on the right side of sweet to complement the rest of the dish (like how mango chutney complements a curry).

I went back for second helpings, then went back to my desk and sent Lee-Ann a grovelling apology, begging for the recipe. Then I went onto Ocado and ordered some of Mrs Balls original chutney from the South African shop. Then I made up a story to Andrew about a lovely lamb curry recipe I wanted to try (he also hated the idea of bobotie), not mentioning the B word.

Okay, he didn’t LOVE it like I did, but he didn’t hate it. He thought the chutney on top was too sweet, but I think the dish would be too dry without it. So I need to think about how I can tweak it to turn bobotie into a dish we both love. Until then, here is Lee-Ann’s  excellent version. 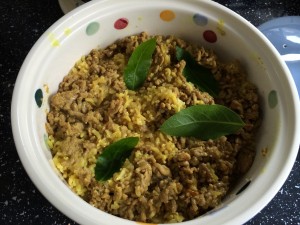 Boil the rice, adding salt, 1/2 teaspoon of garam masala and 1 teaspoon of the turmeric. Once tender, drain and set aside.

Fry the mince with some salt, add the garlic, ginger, garam masala, mild curry powder, turmeric, cumin, coriander and clove. Once it has lightly browned, add 200ml of milk and 50ml of water and let it simmer.

Separately, mix 50ml of milk and the eggs.

Layer the rice and mince in a baking dish, pour the milk and egg mixture over and try mix it to go down through to the rice layer. Garnish with bay leaves. Bake this in the oven at 160 degrees for 35 minutes, once ready and slightly cooled, smear a layer of the Mrs Balls Chutney over the top and serve.

Have you ever been proved wrong by eating a dish you thought you’d hate, and realising that you love it?