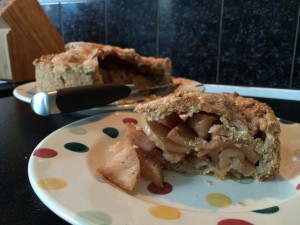 The other day I was sourcing some new recipes and happened to mention to a lady who does the PR for Pink Lady apples (I hadn’t realised that apples needed their own PR, so you really do learn something new every day) that I needed to find some apple recipes, as puddings made from apples are practically the only kind my boyfriend will eat. She kindly offered to send me some recipes and a box of Pink Lady apples so that I could try some of them out, and so of course I said “yes, please do send me some”. I wasn’t sure what to expect, but received a large bright pink box filled with eight Pink Lady apples, along with a pen and a shopping bag which was branded Pink Lady.

I was really impressed (although a big pink hamper of chocolate would have been even better, if any PRs are reading this!) and as I had a free Sunday set aside for pottering in the kitchen, I decided to make a three course meal from the Pink Lady apples. 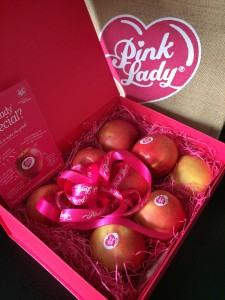 Apparently these particular apples are exceptionally sweet (I have subsequently discovered that for most of my friends this variety is their favourite, even though I had never heard of them before), so when used in baking you don’t  have to add much sugar to the recipe. They are more red (pink!) than green but don’t have that grainy texture which some red apples have (which I really don’t like), and so they look very pretty on the plate.

The menu I chose was firstly this apple and fennel salad,  although I did stray from the recipe a little. My main course was made up by my greedy brain: pork, apple and chorizo summer stew, which I served with red rice. Pudding was a wholesome apple pie made with wholemeal flour and Pink Lady apples.

Even though I do say so myself, each course was fantastic, and I’ll definitely be making them all again. It’s true that the apples are very sweet so you don’t need to add much sugar to them, and they retail their shape very well when cooked, so you don’t end up with an apple sludge in your apple pie (nice in itself but I personally prefer texture to my apple pies and crumbles). Even better, their skin is such a pretty colour that you don’t need to peel them, which is brilliant for someone as lazy as me! 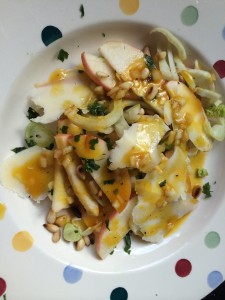 Thinly slice the fennel and apple and mix it with the parsley and lemon juice to stop it going brown. Top with the pine nuts and hard cheese – I used some tete de moines cheese which was lurking in the fridge, but parmesan or manchego would be lovely – you want something sharp and salty to counteract the sweetness of the apples.

Chop the onion finely and put it in a jar along with all the other ingredients for the dressing and shake them together. You could use ordinary balsamic vinegar but I saw this cider one on the supermarket shelves and thought it would go very well with an apple salad. You could use olive oil instead of rapeseed oil, but to me the yellow of rapeseed oil sings of summer.

Drizzle the dressing over the salad and serve immediately. 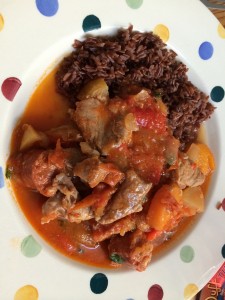 Dice the shoulder steak and slice the chorizo into chunks. Put them in a saucepan with the sliced apples, pepper and onion. Add garlic, paprika, the oxo cube and the cherry tomatoes, and then cover with water. Bring to the boil and then allow to simmer for 2 hours until the meat is tender. I didn’t even need to add any salt and pepper to the stew! 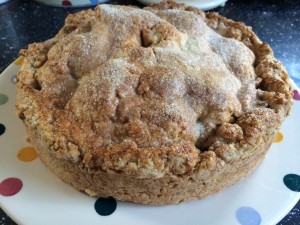 Don’t be put off by me calling this pie wholesome, as it’s super tasty, and would be very indulgent with a big dollop of cream – yum! First make the pastry by mixing the flours and caster sugar with the diced butter until the mixture resembles breadcrumbs. Add the egg, vanilla (I had this idea from a Dutch apple pie recipe I have made before) and a few splashes of cold water until the pastry is combined into one lump of dough. Allow to chill and rest for 30 minutes in the fridge.

Chop up the apples but don’t worry about peeling them – just remove the core. Mix them with a sprinkling of cinnamon.

Reserve 1/3 of your pastry for the lid of the pie and roll out the rest into a circle – use this to line the base of your pie tin (I use a loose bottomed cake tin for my pies, and lightly brush with oil it before putting the pastry in and pressing it to the sides), then add the apples, brush the sides with eggwash and top with the other bit of pastry. Use the rest of the eggwash for the top of the pie and sprinkle a little brown sugar on top. Poke a hole into the top of the pie to allow the steam to escape, and bake at 160 degrees for one hour.

I have entered this post into United Cakedom’s seasonal apple linky – why not take a look and see what other recipes they have?

5 Replies to “A feast of Pink Lady apples”