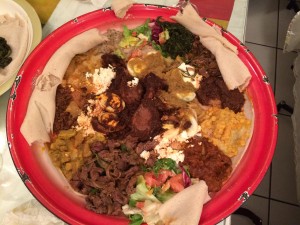 Okay, okay, I know it’s not week 3 of the year and we are actually already in  February (seriously, where is this year going?!) but I am desperately trying to catch up on some blog posts as I’ve had a lot of foodie fun but not enough time to write about it recently.

So, back to the story: in early January I was invited to a surprise team lunch during a work trip to Paris. Well of course I jumped at the chance – not only an opportunity to catch up with my colleagues in an informal environment, but also to eat delicious French food.

I started dreaming about what might be on the menu … duck confit? Crepes? Mousse? Steak-frites with bearnaise sauce? Mmmmmm, I was dribbling at the thought of what deliciousness might be coming my way.

I didn’t expect to be invited to an Ethiopian restaurant in Paris though, and I must admit to being a little bit disappointed. However, I had never eaten Ethiopian food and had heard mixed reviews, so I was ready and willing to give it a try. 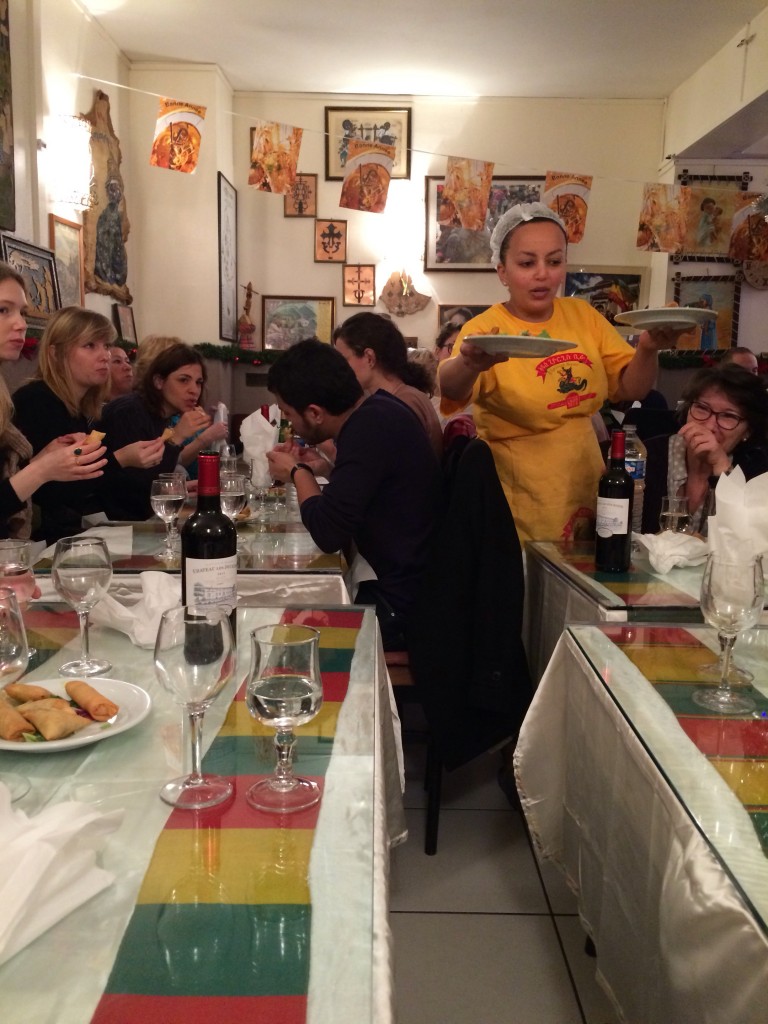 I have to confess that I did eat a rather large breakfast on the Eurostar just in case the food wasn’t entirely my cup of tea, and that ended up being a good strategy. Restaurant Menelik is on Rue Sauffroy, and was staffed by very friendly serving staff. The restaurant is clean and decorated with vibrant colours. I immediately noted the lack of cutlery on the table, and realised we would certainly be eating with fingers, which is not my favourite way of eating food but others in the group enjoyed this. 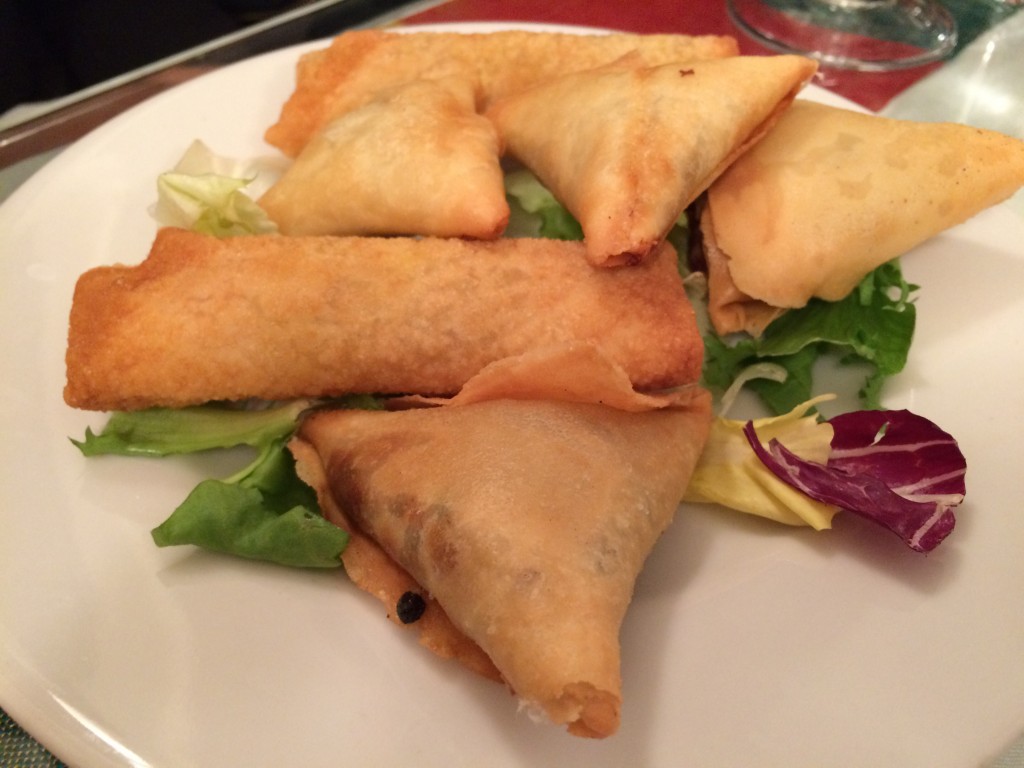 Almost immediately we received a selection of starters on shared platters: samosas and spring rolls on a bed of lettuce. These were decent enough, although I struggled to detect any difference in the fillings. The filo pastry was crispy and they were not greasy. 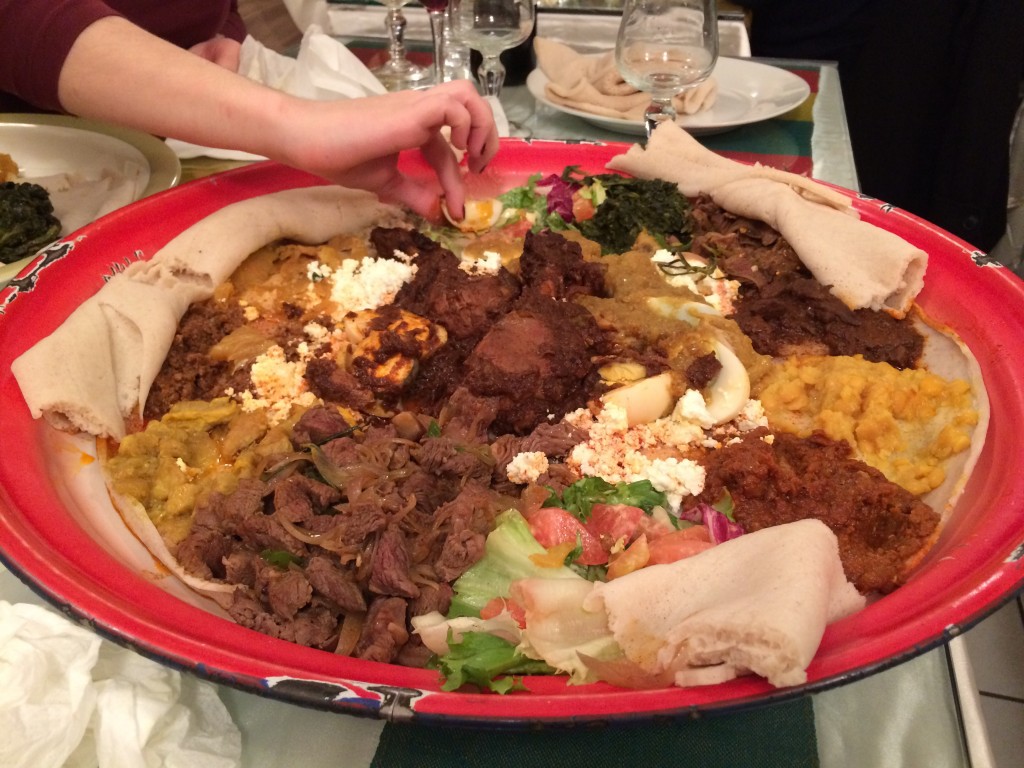 Then along came HUGE platters of curry to share, along with the injera, which is a fermented pancake used as the vehicle to get food from the plate into your eager mouth. The waitress decided to demonstrate how to do this for me by breaking off some injera, picking up curry with it, and then attempting to put it directly into my mouth!

Now I know I am a terribly restrained Brit and maybe the laissez-faire French would appreciate being fed, but it wasn’t for me. I prefer to feed myself. 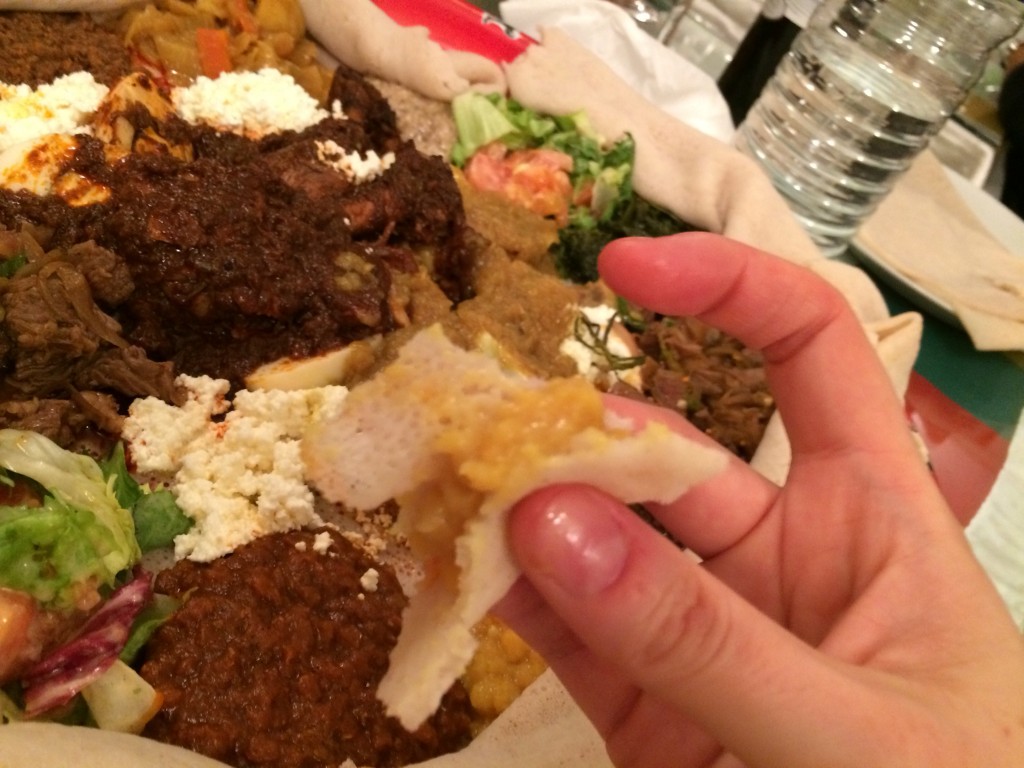 I also wasn’t keen on the injera. The waitress explained it is fermented, which accounts for its rather sour flavour, but I also found the texture to be rather unpleasant. Someone had described it as rather like a wet bandage, and after trying it I could see where they were coming from. I’d probably liken it to a very flat, soggy crumpet which had been made with lemon juice! And there was a lot of it as well – the waitress kept bringing us more even though I’d say we barely managed a quarter of one each.

The range of curries on our sharing platter was vast, but again I am not sure I could detect a significantly distinct flavour for any of them. The vegetarians among us were told which curries were veggie, which wasn’t hugely helpful when those vegetarian options were piled next to lumps of meat.

There was a curry with minced beef, another one with pieces of chicken (bone in), one with eggs, and one with vegetables. There was a bland, flavourless soft cheese crumbled on top. More than that I am afraid I cannot say. We never received a menu (as we had ordered a set meal option for the table) so I can’t be sure exactly what we ate. 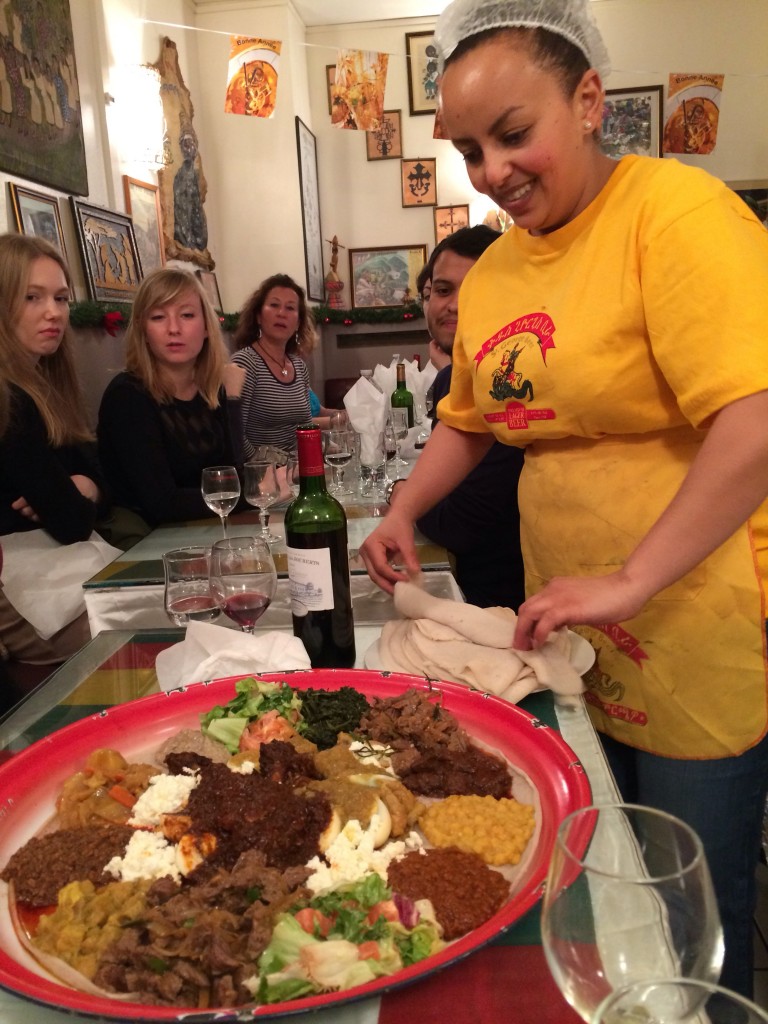 Some of my colleagues tucked in with relish and genuinely enjoyed the shared platter / eating with hands experience, but it wasn’t for me.

There were desserts and coffee to be had, but by that time we’d already been at the restaurant for nearly two hours and so I had to head off to the office to start my working afternoon. One or two colleagues did end up tucking into bars of chocolate when they got back so I think reviews were definitely mixed.

If you do enjoy Ethiopian food then I am sure that Restaurant Menelik would be well worth a visit if you happen to be in Paris. I’d recommend spending an evening there rather than a lunch break as service isn’t speedy. But next time I’ll be plumping for a French bistro. 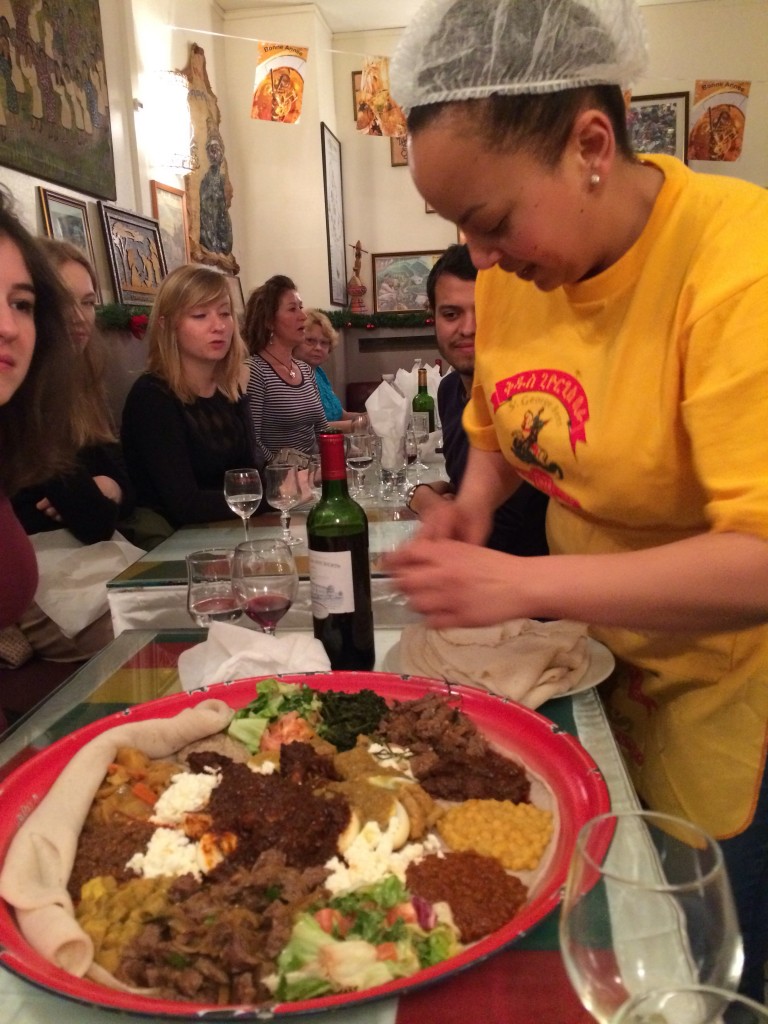