One of my favourite traditions is the one that my friend Jo and I share, and that is to treat eachother to a birthday meal each year. We used to go with our friend Niasha who has now moved back to Sri Lanka, and sometimes Charlotte of Alphabet Adventures joins us, but we never miss it.

This year both Jo and I were feeling a bit over-indulged due to the Christmas festivities, so Jo asked for a relatively healthy choice. I picked Bruno Loubet’s Grain Store because I’d been before and knew the food was delicious, light and healthy, and because I knew we’d never get our respective partners Andrew and Billy there (light and healthy does not feature in their wish list for restaurants).

In a fit of virtuousness we walked to Kings Cross from the city, not realising that we were late for our 6.30pm booking until I checked our phone on arrival and saw I’d received two text messages from the restaurant (we were only 20 minutes late). However, our table was still available, although we were told we’d have to leave after 90 minutes, which I always find a little bit irritating, as our efficiency does somewhat depend on the service of the restaurant.

The restaurant is open plan and airy. That makes it a touch noisy but as the tables aren’t too close together you can have a decent conversation without shouting, so Jo and I caught up on our gossip and made our choices.

The only vaguely indulgent option on the menu is a portion of chips, so don’t go to Grain Store if you really want a treat meal.

I ordered grilled leeks with walnuts and spiced aubergines to start. The leeks were stringy rather than tender, and cold, but the warm aubergine topping was tasty and subtly spiced. I couldn’t be sure exactly where the walnuts featured in the dish – perhaps in the aubergine – but it was very tasty. 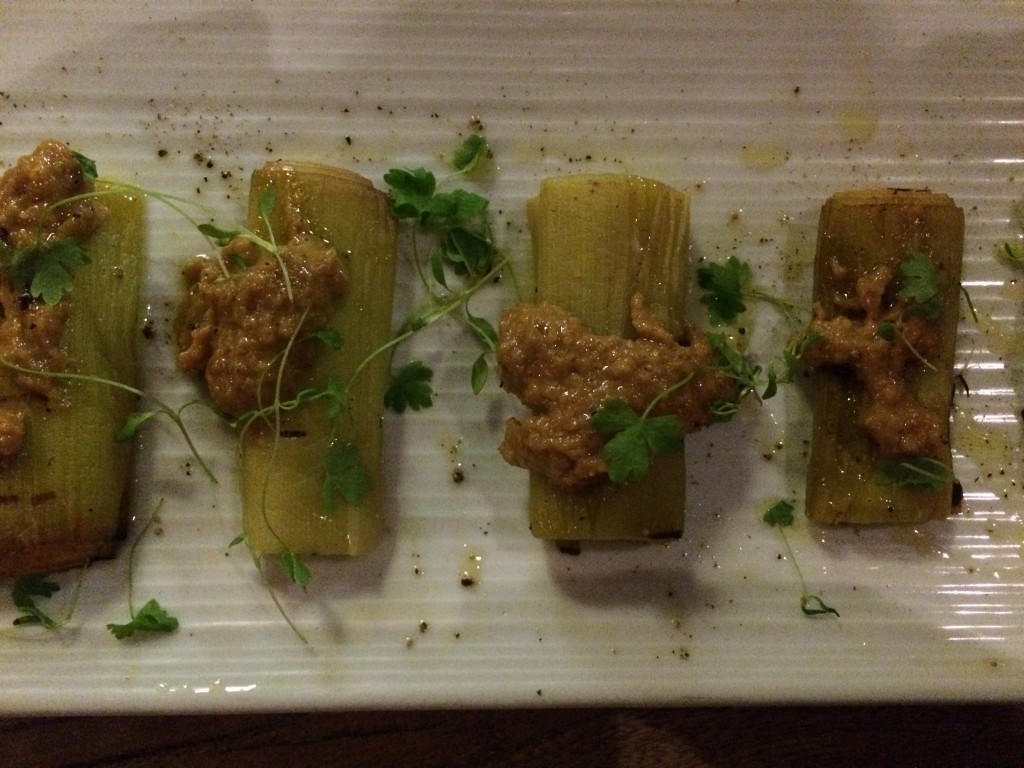 Jo ordered multi grains and seed porridge, a ‘superfood in a bowl’. Although it’s exactly the kind of dish which would send Andrew and Billy running for their lives in disgust, we both thought it was delicious. It was rather like a risotto flavoured with chicken stock, and topped with grilled onions and smoked cheese. You can order it as a main course, and I’d certainly be tempted to if I returned. 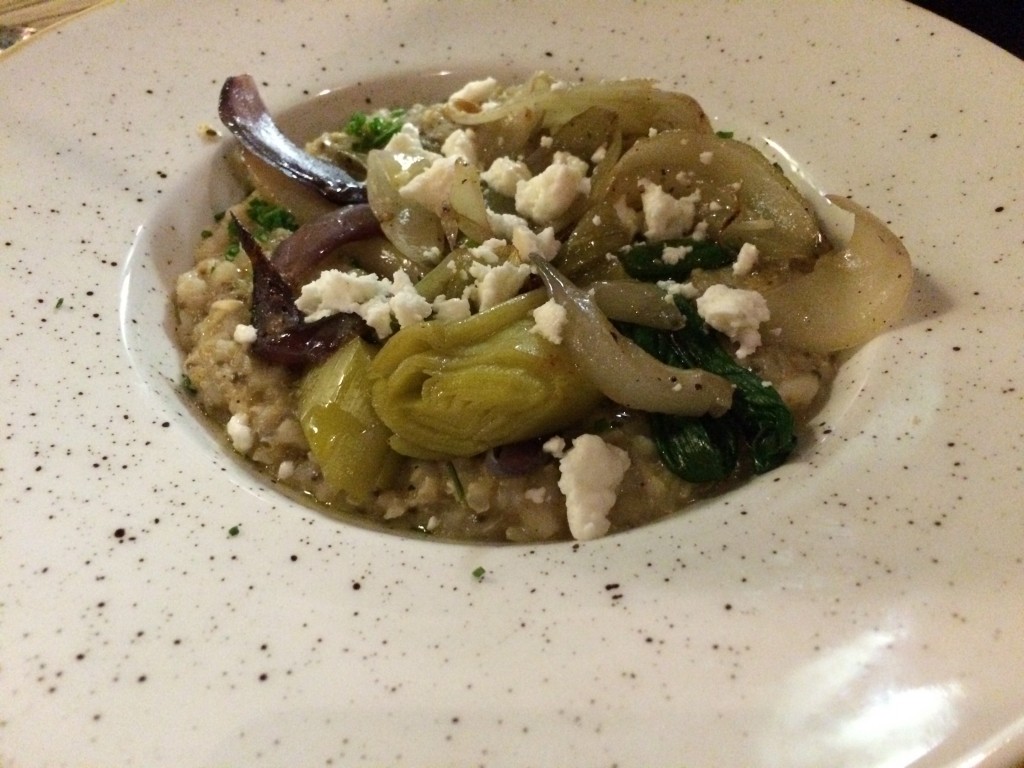 I was less taken by the choices of mains, but eventually decided on lamb shoulder with potato and garlic skordolia. I didn’t know what skordolia was – it turns out it’s a thick puree with a garlic base. It was certainly very tasty, and the sundried tomatoes and olives added to the mediterranean flavours of the dish. 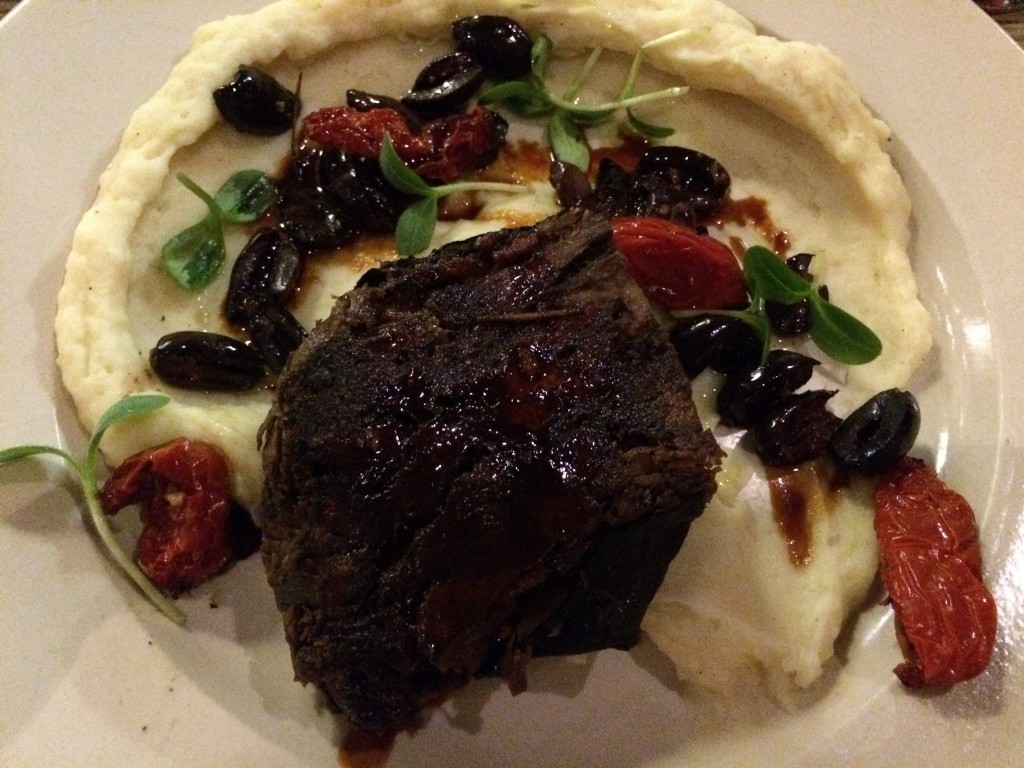 I couldn’t resist ordering a side of fries for us to share – had I realised what the skordolia was I wouldn’t have bothered as they were totally unnecessary albeit very tasty. 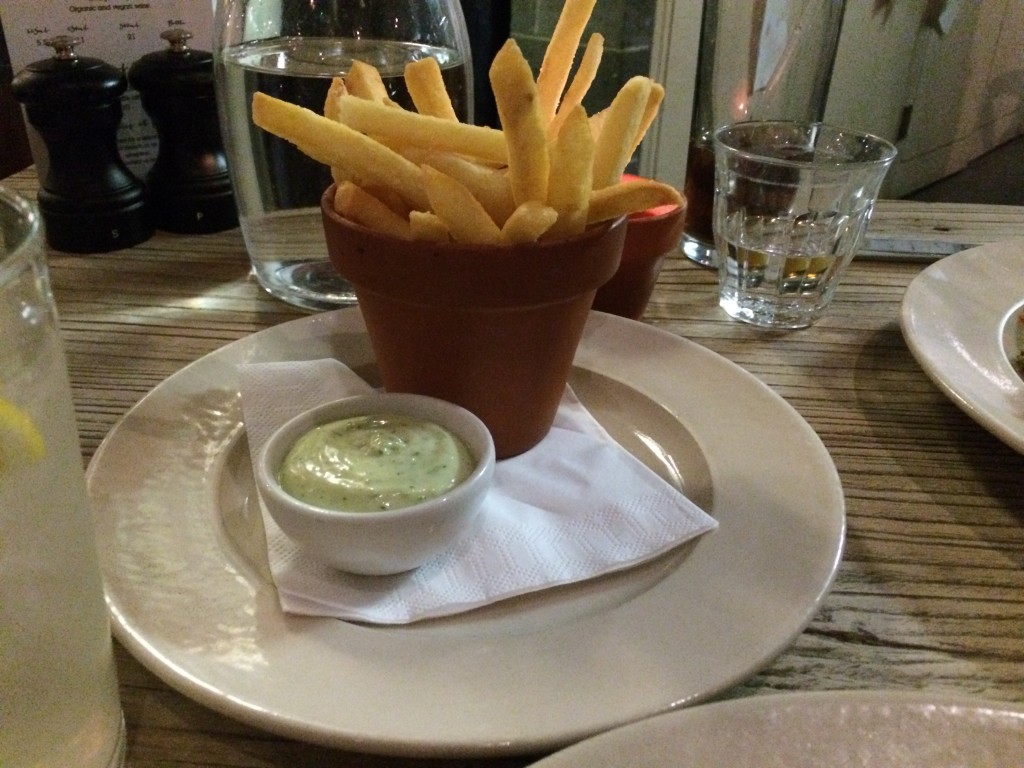 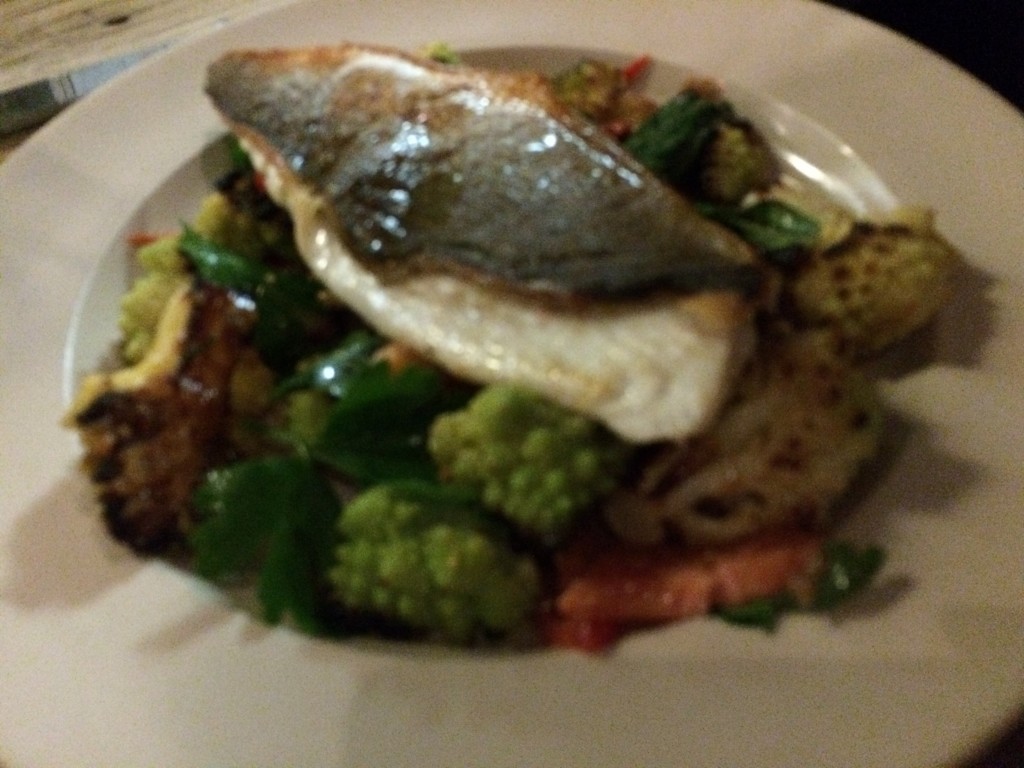 We should have stopped there, but could not resist ordering desserts. I think I got off relatively lightly with the chocolate delice with pina colada mousse and toasted coconut. The coconut was overly toasted and didn’t look very appealing, although Jo thought they  tasted okay. 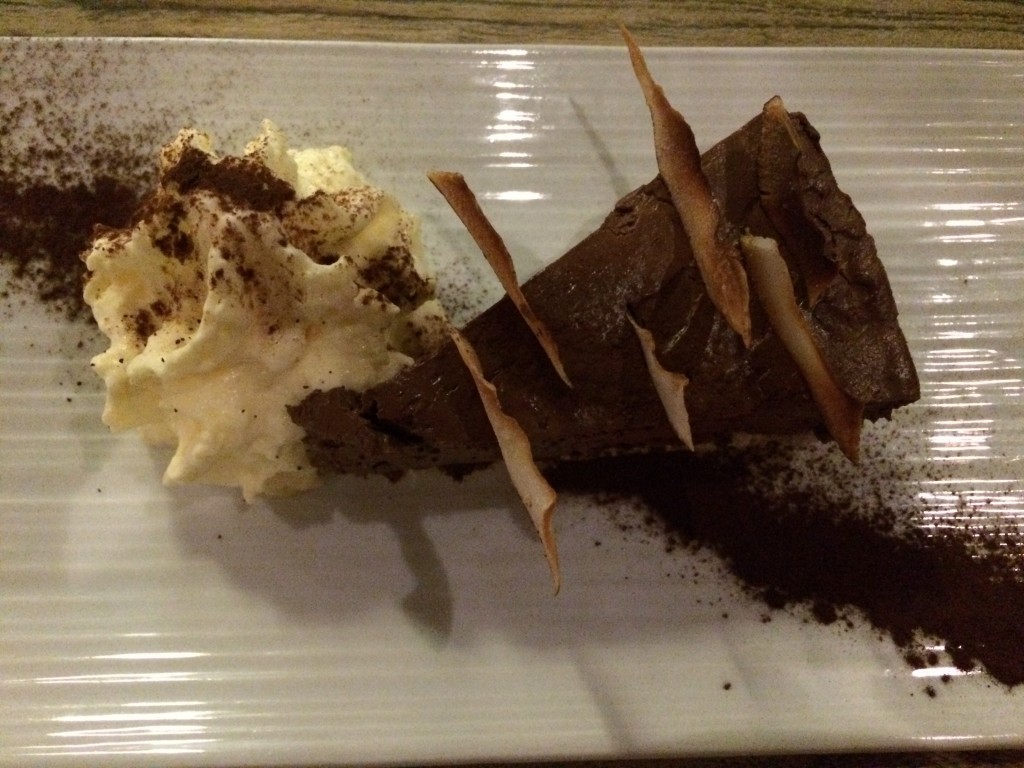 She might have been desperate though as her parsnip and white chocolate cream essentially tasted of mashed parsnip, which is not the optimal flavour for a pudding in my view. It looked very pretty but wouldn’t be a taste experience either of us would want to repeat. 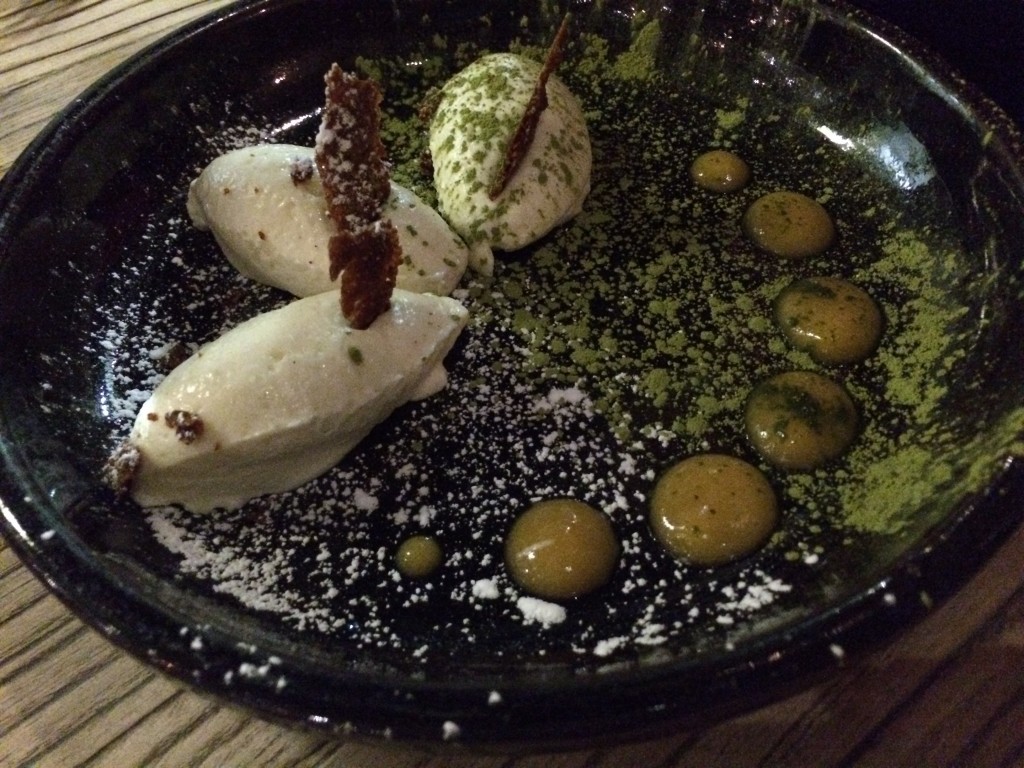 Overall Grain Store is well worth a visit if you fancy eating a relatively healthy but well put together meal full of unusual ingredients. My advice would be to skip the pudding though.

Our bill came to just over £80 for 3 courses each with soft drinks.