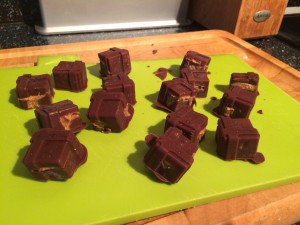 Well, I am going to be in the UK all of this week, but I have quite a few things planned, including a couple of lovely meals out with friends. I’ll be out on Tuesday night with Emma at Trullo restaurant in Highbury (I can never resist checking out the menu, and the pork chop sounds very appealing), and then out with Jo from Alphabet Adventures for her birthday dinner on Thursday.

After seeing the Foodaholic’s review of Hot Box, we’re going to be heading over to Shoreditch to give it a try. I feel obliged to give the deep fried Oreos a go for pudding! Hope they are not sold out, as they were for the Foodaholic. And then at the weekend we’re going to Gogglebox’s Steph and Dom’s B&B in Sandwich, Kent. Chin chin! Lots of reviews coming up for you.

My Cookbook Challenge book, chosen by Andrew for this week, is one I picked up from the Magpie Cafe when I was in Whitby last year (which reminds me, I need to share with you the lovely meal I had there). It’s the Magpie Cafe Cookbook, which is full of recipes inspired by the North Yorkshire coast. Andrew was trying to pick a recipe for me to make and couldn’t choose from the many delicious options, so I’ll be pondering my options in detail later today!

Whilst I am around this week, I am planning the following meals: 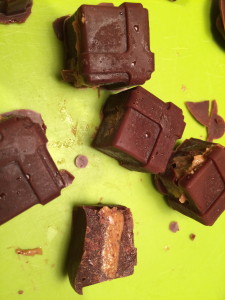 I have also made some more of Deliciously Ella’s raw brownies (my version here) and also some of her Salted Vanilla Almond butter cups. The chocolates are very easy to make in a silicon chocolate mould, but I haven’t decided yet if they are worth making again.

The flavour of the chocolate is good: quite intense and rich, but the texture of the chocolate is a bit waxy, like a cheap version of chocolate (and believe me, they are anything but cheap to make, with the combination of cocoa butter, cocoa powder, maple syrup almond butter). I think if you couldn’t eat chocolate for dietary reasons (or wanted to refrain), these are a good way to get your chocolate-hit, but I don’t think there’s much comparison between these and real chocolate pralines.

I admit that mine look a bit of a mess – they definitely look homemade! That’s because silicon moulds are quite wobbly and so transferring the filled mould to my freezer meant that some of the chocolate made an unexpected journey outside of its little section to meet its friends. Not bad for my first attempt though. 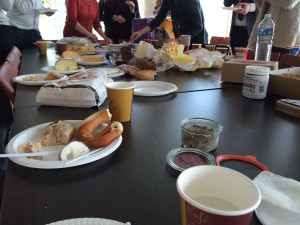 Last week ended up being good fun in Paris, even though it was very intensive work-wise. My continental colleagues each bought in a local speciality for us to try, and I’ll be writing a separate post about all the delicious things they shared.

I also used the Cookbook Challenge this week to create a romantic 3 course menu for Valentine’s Day. In fact, Andrew and I don’t bother celebrating Valentine’s Day after becoming increasingly outraged by what a rip-off restaurants become at this time of year: the same menu, doubled in price and quick turning tables so you can’t even relax and enjoy your meal properly. But I rarely need an excuse to make a posh meal, and so I thought I might as well cook a slap up one for us. Full details will be in my next Cookbook Challenge post, but here’s a sneak preview of what we had, thanks to Gary Rhodes’ Great British Classics:

For Sunday dinner today we are going to enjoy slow roasted duck cooked with Chinese five spice and more of the rhubarb tart for pudding.

Hope you have some delicious food planned for this week – feel free to share your plans in the comments section.

2 Replies to “Week 7 – out for dinner, making chocolate, and some continental treats”