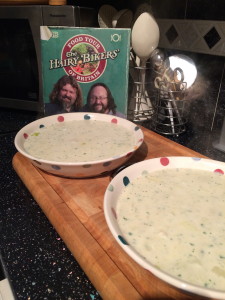 This week, not one but TWO recipes for my Cookbook Challenge. I am really enjoying the opportunity to try new recipes and expand my cooking horizons, but I am not sure it’s doing much for my waistline or bank balance!

Andrew chose The Hairy Bikers Food Tour of Britain this week. I actually struggled to find recipes I really wanted to cook, as I’d made a couple from there already and wasn’t overwhelmed by the rest of them. As I am trying to avoid too much pasta, potatoes and bread, I eventually decided to make Cullen Skink (smoked haddock soup) for Saturday, and Lamb & Barley Hotpot for Sunday.

Both were actually really easy to make, although the Cullen Skink worked out a bit pricey as I had to buy haddock for the stock, and then more haddock for the actual soup. However, it was tasty and filling, and I’d definitely make it again with a few little tweaks. The biggest problem with the soup was that it made the house stink of smoked fish all evening – may be a dish best cooked in the summer months when you can have all the windows open! 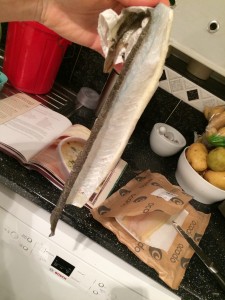 One little tip for you: remember to remove the skin from the fish you intend to use in the actual soup (as opposed to the stock). I skin fish by putting the blade of the knife between the fish and the flesh at a 45 degree angle and then holding the edge of the skin with a piece of kitchen towel. You need to pull the fish towards you, against the blade of the knife (always move the fish, not the knife) and the skin should cleanly come off.

I made the Lamb & Barley Hotpot on the Saturday night as well, as I wanted it to cool down so I could remove the bones from the lamb shanks and then re-heat the stew on Sunday. As well as the convenience of being able to remove the bones (and any fat), I am a firm believer that all stews taste better with at least one day of sitting around, and I wasn’t mistaken on this occasion.

The barley in the stew is pearl barley – one of my favourites. The grains look like little sugar puffs and expand after several hours of cooking. I often chuck a handful into stews, but this is one of the first times I have added enough so that the main bulk of the stew has come from them. It’s another trick I will be repeating.

Not many photos here today as neither dish is particularly beautiful! So the final photo below shows the challenges I faced today when writing this post! 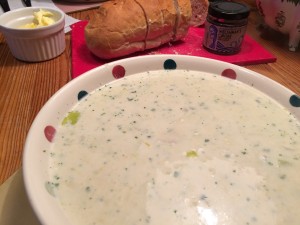 Firstly make the stock: heat the oil and butter in a pan and lightly sautee a roughly chopped leek, onion and fennel bulb. Add the water and smoked haddock and simmer for 20 minutes. Strain the stock and set aside.

In a large saucepan melt the butter and oil and sautee a finely chopped leek and onion with the garlic. Peel and chop the potato into small cubes. Add to the pan and cover with the stock, add the haddock and simmer for 10 minutes until the potatoes are tender. Add the cream and blitz the soup with a hand blender so that some lumps of fish and potato remain (I wouldn’t bother blitzing it next time as I prefer the soup lumpy like a chowder). Sprinkle with parsley and a grating of nutmeg and serve with crusty bread. 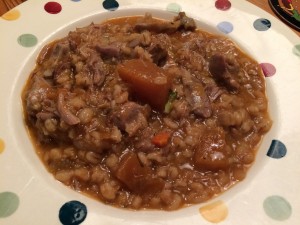 Ideally cook this in a saucepan which can also go in the oven, as first you need to brown the lamb shanks on the hob. Add the olive oil to the saucepan and heat, then sear the shanks on all sides. Remove the lamb and use the same oil to gently fry the sliced onion, sliced carrot and diced swede. When the onion is soft but not coloured add the garlic, herbs (I ended up using dried rosemary and thyme as I didn’t have any fresh in the house) and tomato paste and stir.

Return the browned shanks to the pan and add the pearl barley. Cover with water and crumble in the oxo cube. Put a tight lid on the pan and cook the stew in the oven at 150 degrees for 3 hours (check after 2 hours to ensure you don’t need to top up the water).

Before serving stir the mint jelly into the stew and check for seasoning.

The next Cookbook Challenge chosen by Andrew will be Gary Rhodes’ Great British Classics. Oh dear – I have a feeling that his recipes won’t be quite as rustic as the Hairy Bikers! 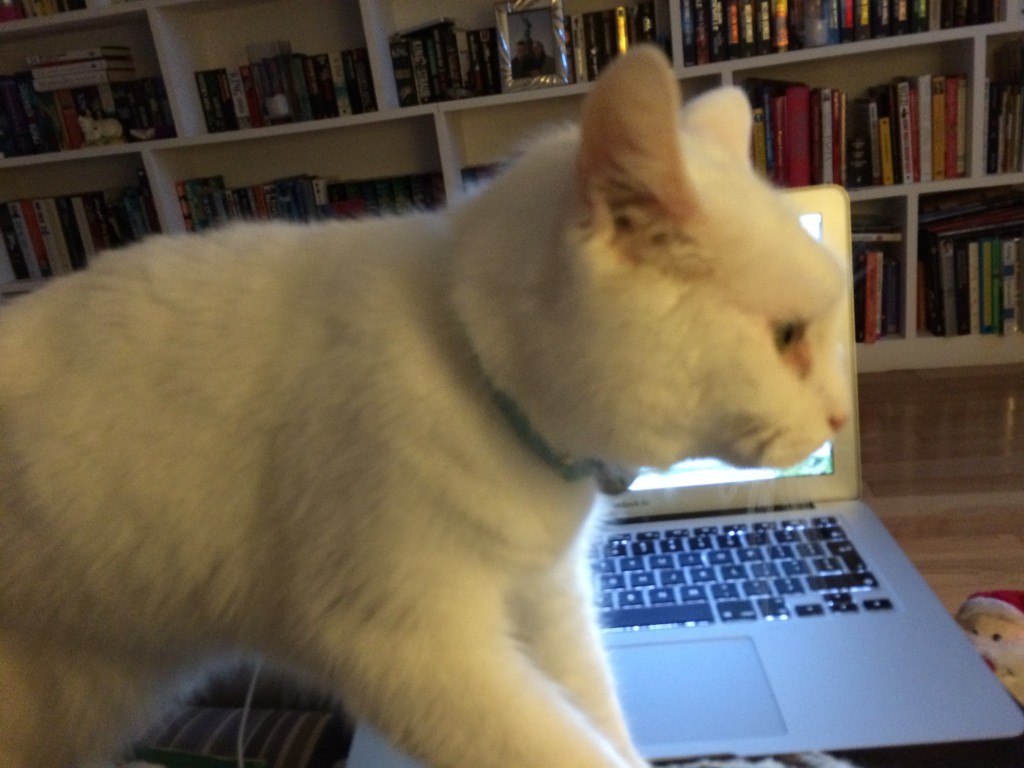