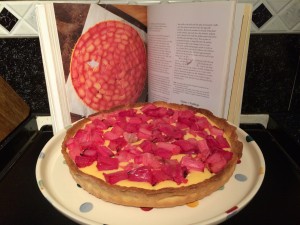 Gary Rhodes is one of those TV chefs who was always on the telly when I was growing up, with his spiky hedgehog hair and checkered trousers. Despite his (for the time) slightly unorthodox appearance, his cooking and presentation could not have been more traditional. Classic dishes, cooked traditionally, presented in a refined and simple way to let the food do the talking.

Andrew and I went to the now closed Rhodes 24 several years ago for a celebratory dinner, and were stunned by the views (looking out from halfway up Tower 42 – it was the highest we had been in London at the time before the Walkie Talkie and Shard). We were also stunned by the quality of the cooking, but perhaps even more so by the precision of the presentation.

I still remember having braised oxtail ravioli and jam roly poly (not the best dishes for a June evening, I grant you), and thoroughly enjoying the food, the service, the feeling of being out ‘somewhere posh’ even though it wasn’t intimidating (it was the first time I had seen a sommelier taste the wine himself before serving it to us, and I was amazed). 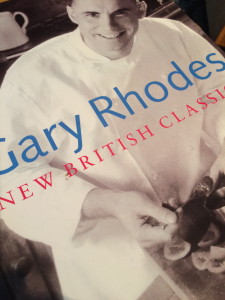 But, Gary Rhodes seems to have fallen out of fashion since those days … apart from an appearance on the first series of Great British Menu, I haven’t seen him on television for a long time. A Google search leads me to his own website, where the ‘latest news’ dates from May 2012. A more recent local newspaper article suggests that he closed restaurants in London to focus on new ones in Dubai and Plymouth, the latter of which still appears to be open according to its website (with 50% off menu deals – suggesting its not quite in the same league as the Michelin-starred Rhodes 24).

However, I am still a fan of his food, and was glad to be reminded of his New British Classics when Andrew chose his book for my most recent Cookbook Challenge.

Firstly let me be completely honest with you: presentation is not my strong point (no surprise to anyone who follows this blog regularly) and there was no way in hell I’d ever be able to replicate Gary’s meticulous plating up. I didn’t expect to end up quite so far from Gary’s proposed look and feel (the cod dish wasn’t terrible, but my rhubarb tart was a right mess), but the taste was still pretty good so I was happy.

I decided to cook a 3 course special menu for Valentine’s Day, as we never go out as object to paying double prices as restaurants significantly mark-up their menus. I am trying to pay attention to how many carbs I eat, so chose dishes which didn’t rely too heavily on refined carbs like bread, pasta and potatoes (although I couldn’t resist the idea of pastry for the rhubarb tart).

The tart is the most time consuming dish to create as each element (pastry, custard and rhubarb) has to cook and cool. That’s not to say any aspect is difficult though – although if you are nervous around pastry and custard you might not be too fond of making this dish. 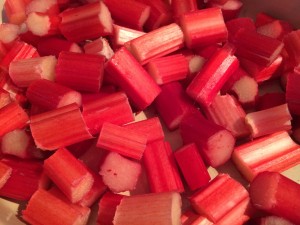 The tomato salad is a bit on the fiddly side as you need to skin the tomatoes and remove the pips so you just use the flesh to make the salad. Peeling tomatoes is boring, although it helps if you blanch them first by putting a little cross into the top and bottom of each end of the fruit and then pouring boiling water onto them. Leave them in the boiling water for a couple of minutes and then cover them with cold water to shock the skins into loosening up. Then peel the skin off the tomatoes with a knife and voila – the main part of the job is done.

Gary also uses homemade tomato ketchup (also from the book) in his recipe – I used Mr Heinz ketchup instead. I didn’t notice an issue with the taste but if you had time you could make the sauce as well.

The cod dish is very simple to make, although was the least successful of the three as Andrew found the amount of carrots was a bit too sweet for his tastes after a while. I did use bottled water to cook the carrots, as suggested by Gary, as I had a bottle which I’d had in my bag from a recent Eurostar trip. Did it make a difference? I can’t tell, but wouldn’t go out of my way to use bottled water in the recipe again.

So the recipes below explain how I made each dish. You could easily increase the portions of the starters and mains for more people. I absolutely loved the starter and will definitely make it again. It would be beautiful as a summer main course with some crusty bread and green salad, sitting in the garden with a crisp white wine. Bring it on, summer! 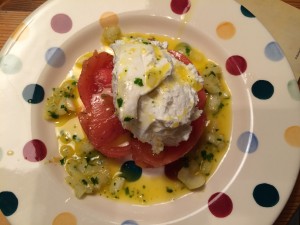 Prepare the tomatoes as described above, removing the skin and pips. Quarter the skinned tomatoes and mix them with the tomato ketchup, salt and pepper. You need to make two rings of tomatoes which I did by pressing the tomato into chef rings and then weighing them down with a couple of ramekins and refrigerating them for a few hours. 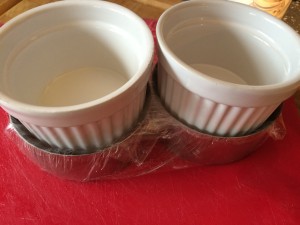 Mix the oil, mustard, finely chopped onion and parsley together in a jam jar. I added salt and pepper to taste.

To plate up the dish Tracy’s way (as opposed to Gary’s way), push the tomato out of the chef ring so it maintains a circle of tomato. Put a spoonful of cream cheese on top and then add some dressing around the outside of the plate, and drizzle a little over the creamy cheese. 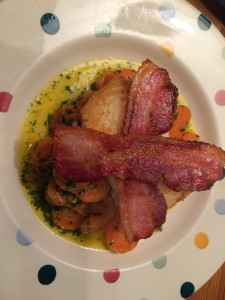 The bacon needs to slow cook so it goes crispy. I just cooked the rashers slowly in a dry frying pan but you could oven bake or grill them if you prefer. 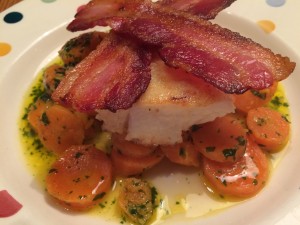 For the cod, dust the skin side (although the skin should have been removed) with flour and add salt but no pepper (as this is the presentation side, so Gary wants it to be pristine). Gently fry in olive oil for 5-6 minutes until golden, then turn over and fry the other side for another couple of minutes. Squirt with lemon juice just before serving.

This dish was lovely, but not half as tasty as the starter, and a bit too sweet for Andrew with all the carrots. 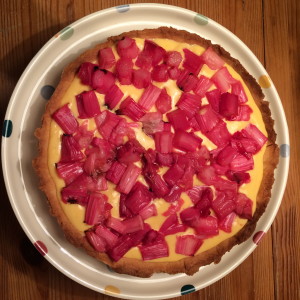 First make the pastry as you need to refrigerate it for an hour. I mixed the flour, salt, butter and sugar in a food processor until it resembled breadcrumbs then added an egg and continued to mix it until the mixture clumped together. Remove the pastry, wrap it in clingfilm and pop in the fridge for an hour.

Let me make a confession. The recipe makes more pastry than you need. I am slightly ashamed to say I ate the rest of the mixture … raw. It was fabulous. Better than cooked pastry. Maybe it’s because I had a week off of eating naughty things, but once I started picking at the pastry I could not stop. Be warned. 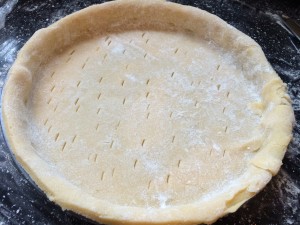 While the pastry is in the fridge, make the pastry cream. Heat the milk in a pan with the vanilla bean paste (you could also use vanilla extract or split vanilla pods), and in a jug beat the egg yolks, caster sugar, salt and custard powder together. You can use cornflour instead of custard powder but I wanted the rhubarb and custard flavour so went for custard powder (I always have some in the cupboard!).

Add the hot milk to the egg mix, whisking furiously so that the eggs are well mixed and don’t start scrambling (although the cornflour in the eggs makes the mixture much more stable than normal custard). Pour the mixture back into the saucepan and heat it gently for several minutes until the custard is thick, then add the double cream and butter and stir. Gary said to sieve the mixture but mine wasn’t lumpy (result!) so I didn’t bother. Cover the custard with a piece of clingfilm so a skin doesn’t develop on it, and allow to cool. 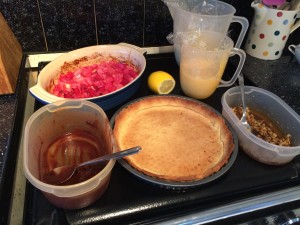 Let me make a confession. The recipe makes more custard than you need. After the shenanigans with the pastry you’d think I’d be full up and not tempted but the custard is so creamy and warm and sweet and tasty that I could not resist spooning it into my greedy little mouth. Mmmmmmmm. I’d make this again just so I could eat it out of the saucepan.

So whilst the delicious pastry cream is cooling, sort out the rhubarb. Slice into 2-3cm sticks (I tried, but mine still looked rubbish!) and sprinkle with sugar. Bake for around 20 minutes at 180 degrees until the rhubarb is tender but not coloured, then allow to cool.

So by this time you should be ready to bake your pastry. Roll it out (try not to munch on it whilst you are doing so) and line your tin (I didn’t grease mine and it didn’t need it). Prick the base of the pastry with a fork and line the pastry with greaseproof paper and baking beans and bake at 200 degrees for 20-25 minutes until golden and crispy. Remove from the oven and allow to cool. 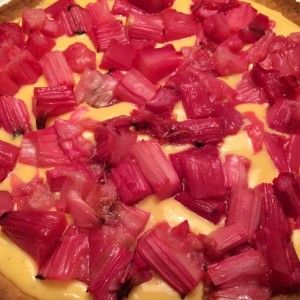 Assembly is simple: pour the pastry cream into the cooled case and top with the rhubarb. Gary suggests you should sit the fruit on top of the custard, carefully arranging it in the cream, or “merely spooned over in a more rustic fashion”. You can guess the option I chose.

So ultimately this week’s Cookbook Challenge was a big success. I’ll certainly make the rhubarb tart and the tomato and goats cheese salad again, but I don’t think I’ll bother with the cod dish.

Are you a fan of Gary Rhodes? Do you know what he’s up to nowadays? 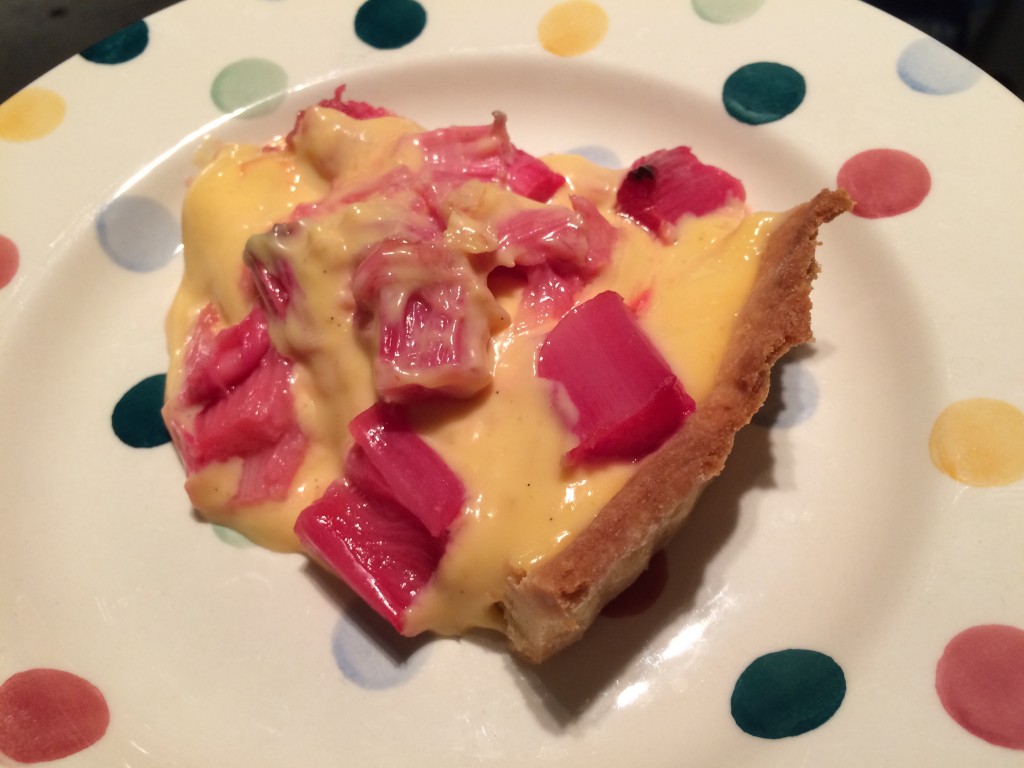