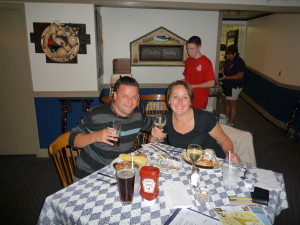 Did you see the news recently about how the inflation shopping basket has changed over time? This is the notional ‘shopping basket’ which is used to calculate the cost of inflation. Personally I don’t pay an awful lot of attention to how much each item in my virtual basket costs … I shop online and so restrict my total budget, but don’t pay attention to the cost of 4 pints of skimmed milk or a box of teabags (although I always look for the offers on my basic staples and then buy in bulk … so of course me cupboards are heaving with things which I have subsequently forgotten about).

But what did interest me in the inflation basket was how it represented an evolution of our food tastes over time (loose leaf tea replaced with teabags, cornflakes for cereal bars for example). I was not the only person to think this of course, and there were plenty of articles on the subject, which I won’t bore you by replicating. But what did amuse me was how mine and Andrew’s shopping basket has changed over time … more particularly on my mind recently as we recently celebrated our 19th anniversary of coupledom.

Now let me just say something here: Andrew and I started university in the pre-digital age, so our photos are all in albums up in the loft and I can’t be arsed to take them out and scan them for you … so instead you are going to be subjected of various photos of us eating and drinking throughout this blog post. Enjoy! 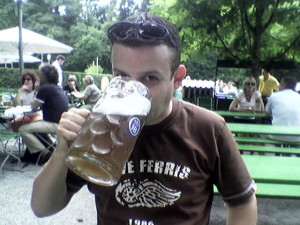 When Andrew and I first met, it was because we moved into the same house share together at university (well, it was with Andrew being presented to be in a wheelbarrow at the Student Union, but that’s a story for other times). In 1996 the EU banned all British beef exports as BSE became a household horror, and so students up and down the country were rejoicing in the fact that they could finally eat beef, being as it was being reduced in price as no one sensible wanted to buy it.

Our local shop of choice was Safeway (now Morrissons), and my food quality control radar was not just overlooking BSE burgers: I rarely bought anything unless it was branded ‘Safeway Savers’. That includes sausages, which makes me feel rather ill to think of now, but I suppose in those days the 97% pure meat sausage didn’t exist outside farm shops anyway (of which there were plenty around in West Sussex, but they certainly would have been too expensive for us to even think of bothering with). 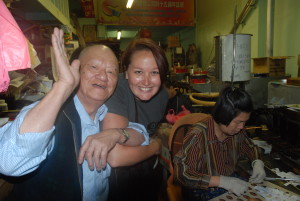 When Andrew and I started going out our food budget essentially doubled, which was handy, and I was happy to cook double portions to feed both of us when Andrew was financing part of our diet. Because you see, Andrew has never been a kitchen kind of guy, and my culinary self-preservation kicked in when he poisoned himself by under-cooking (Safeway Savers) fishfingers. It was a win-win deal as far as I was concerned, and Andrew certainly didn’t do badly out of the deal either (at least, I have never given him food poisoning through my cooking).

So back to our original joint shopping basket. Well, as you might expect all the usual student staples were involved to some extent: baked beans, cheap blocks of cheese, pasta, potatoes, plastic white bread, battery farmed eggs (the shame, but I am not sure that anyone in 1995 was particularly concerned with caring for farm animals … although I suppose as a student I might have been expected to care more about their plight). 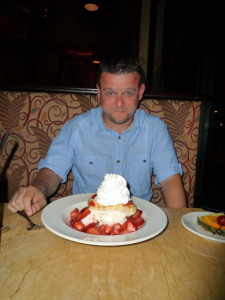 Our supplies were heavily supplemented by Andrew’s parents, who each term took him to a cash-and-carry to buy catering sized quantities of tomato ketchup, 48 pack boxes of crisps, more baked beans (seriously, students can never get enough of baked beans), vats of squash and huge tubs of spread. Of course, stealing was rife in our student house, and so much of Andrew’s goodies were ‘shared’ amongst the other four housemates, but we still weren’t starving (and – more importantly – we still had cash to go out on the lash every night).

Meals then were basic at best. I never used our oven as it was slowly leaking a puddle of grease onto our kitchen floor. I am a bit ashamed to say that it never occurred to us to clean up the patch of oil, or indeed clean the oven. But honestly, we were students – what can you expect?

Our first anniversary meal (and second, and third I think) was to Pizza Hut in Chichester (on an industrial estate), and I’d embarrass Andrew by filling my salad bowl with so much stuff that I barely made it back to the table without it toppling. For those of you who encountered Pizza Hut salad bowls of the 90’s, you’ll remember that the majority of what was available was not actually salad. Most of my bowl was filled with cheese cubes, a bit of cucumber, and then loads of blue cheese or thousand island dressing and ladlefuls of bacon bits. I’d then balance tomatoes on top as Andrew liked them, 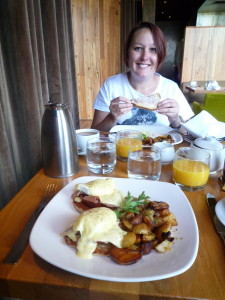 After we graduated, our shopping basket reached the heady heights of the freezer aisle, and our favourite meal was definitely Bernard Matthews mini chicken kievs, baked beans (we never forgot our love of baked beans) and potato waffles.

I also started buying ingredients to cook proper meals, and remember destroying a Pyrex dish when trying to make a roux on the hob from the meat juices of the roast chicken (turns out Pyrex is only heat-proof in the oven, not on direct heat). I also got a griddle pan from my mum for Christmas and started to use that to cook chicken and steak (well done in those days, and BSE free by that time).  But don’t think I was getting all foodie and sophisticated by then – Andrew’s parents visited once and discovered a cucumber in the fridge which had rotted, and then frozen back into its original shape because it was still in its plastic wrapper, and stuck to the back of the desperately-in-need-of-a-defrost fridge. That did not amuse them, nor did the fact that we could only offer them warm beer to drink as we were out of teabags, coffee and milk.

Our meals out then (usually only when parents visited and ‘treated’ us) were to a local Weatherspoons pub for 2 meals for a fiver. 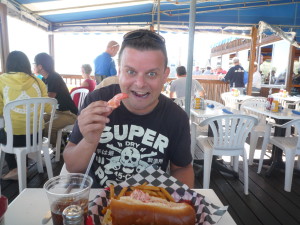 I think when we finally moved to our own place in London I really got into cooking properly, as we did feel like proper grown ups then, with proper jobs. Of course, we were still out drinking almost every night, so I didn’t do a lot of cooking, but we only had a tiny freezer shelf in our fridge so we had definitely moved onto more fresh food, and had discovered a local butcher Frank Godfrey, where we were buying delicious sausages and pork chops.

I remember going out to Pizza Express for the first time (which we considered to be a posh restaurant) and my brother being utterly disgusted to discover that they served a pizza with an egg on top. Andrew also encountered savoury rice for the first time at a Thai restaurant (he had previously assumed – having only encountered rice in rice pudding –  that you could not eat rice unless it was cooked with milk and sugar. 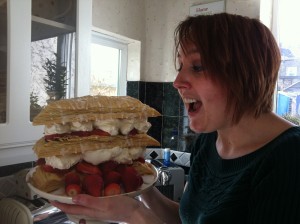 Then I noticed how fat I was getting and started a Weightwatchers diet, which encouraged me to cook everything from scratch and bulk out meals with lots of vegetables. This also made me much more creative with meals and I’d start cooking tagines, stirfrys and Japanese soups to pack as much taste into as few calories as possible.

Meals out now became extravagant (and very occasional) treats to posh restaurants, especially as I became increasingly obsessed with celebrity chef-stalking (by which I don’t mean I was following them around the country and spying on them outside their bathroom windows, but that I became genuinely interested in what chefs were cooking in their restaurants, and trying to replicate the dishes at home in my kitchen). 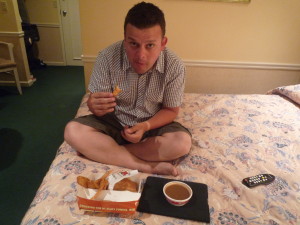 As I became more interested in food, I naturally became more interested in the provenance of it, and the quality of the ingredients I cooked with. I picked ingredients because the people who produced them cared about how they were made, or to support a local or artisan supplier, and realised it was important to me to spend more on quality rather than focus on quantity.

Andrew and I tired of the trend for rich, buttery, creamy Michelin-starred food (and couldn’t afford it as we started to save to buy our first home) and looked towards restaurants which showcased food from different countries and cultures (living in London we were spoilt for choice). A lot of the chefs we followed started to make the kind of food we liked, and so we began to try a new range of restaurants which moved away from foams and smears, and back towards simple but tasty food. 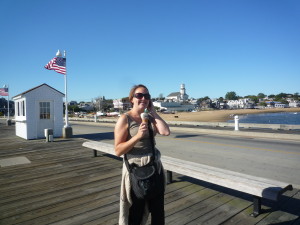 We have been fortunate enough to travel and eat our way around the globe, and this has opened our eyes, and tummies, to different ways of cooking and eating food, and encouraged me to replicate those dishes we have learnt to love at home. Our shopping basket started to be filled from the ‘world foods’ aisles, plus the supermarkets of Chinatown.

In some ways, the staple items in my shopping basket of today has returned to the shopping basket of my mum when I was a child: no processed food, meat from the butcher, butter, flour, sugar and suet, the odd packet of biscuits as a treat, plain yoghurt, milk and orange juice. I go for the higher-end stuff than my mum would choose (she’ll always be a Safeway Saver girl at heart), and I admit to food snobbery which my mum completely fails to understand, but generally I think that my shopping basket has gone back in time, with a few ‘crazy world of the future’ additions.

Do you find your shopping basket has changed over time? If so, what’s the one item which you still buy and will never stop adding to your basket? 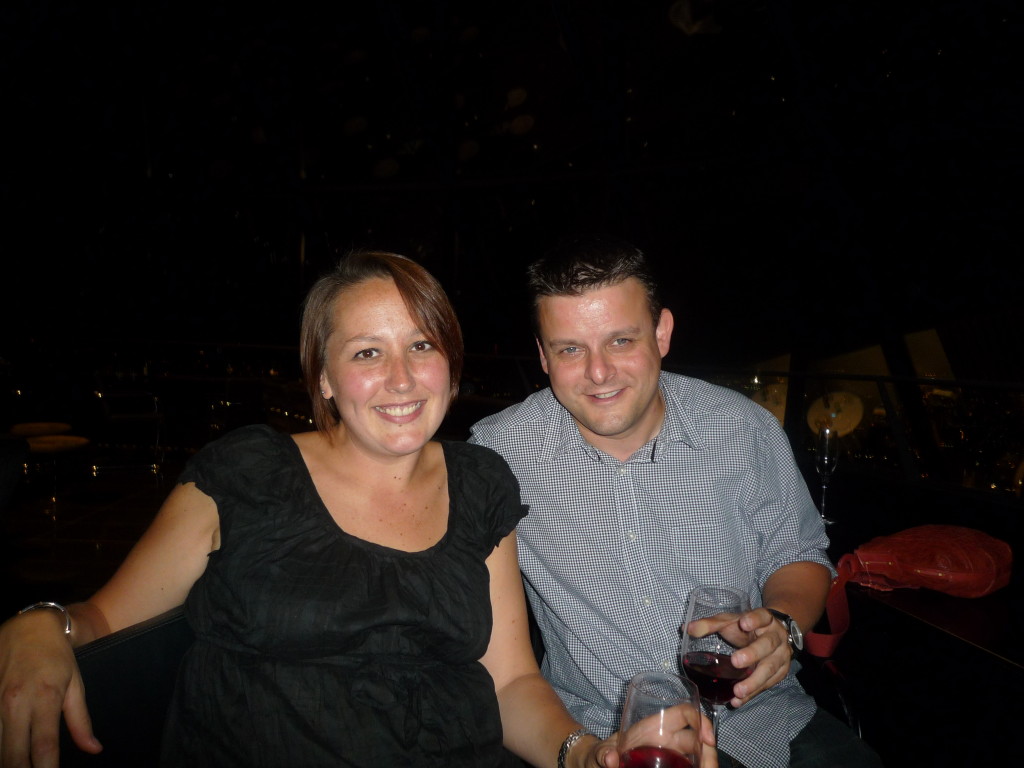 2 Replies to “What’s in my shopping basket?”