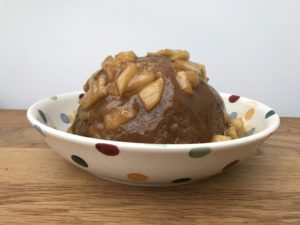 I rarely had school dinners when I was younger, as my friends and I used to eat our packed lunches together in the ‘Quiet Green’ rather than bother with queueing for lunch. However, I definitely fondly remember stodgy school puddings from primary school: jam and coconut sponge with pink custard, chocolate pudding with chocolate custard etc.

Stodgy for me is a pre-requisite for steamed puddings: it’s a good thing that with each mouthful you can feel the pudding sticking to your bones (obviously aesthetically it’s not great when you put on a stone in weight, but it does feel all lovely and comforting at the time).

If I had a choice, I’d make a golden syrup sponge (a quick and easy microwave version can be found here), but Andrew is not a fan of sweet puddings like that, and so I really struggled to find something he would consider acceptable and that I would eat (I don’t like spotted dick or ginger puddings).

Generally in these situations I fall back on an apple option, so searched for an apple steamed pudding on Google, and found this tasty sounding recipe from Galton Blackiston, which didn’t actually look too complicated to make. Apart from the cream for the butterscotch sauce I had all of the ingredients in the house, so it seemed like it was meant to be.

This is an incredibly simple pudding to make, as long as you have a couple of hours spare for the steaming process. Start by making a butterscotch sauce (don’t be scared, it couldn’t be easier), and gently fry some apples in butter (personally I wouldn’t bother with this step next time), and make a simple sponge mixture – then simply layer the three into a buttered pudding bowl and steam for 1.5 hours. 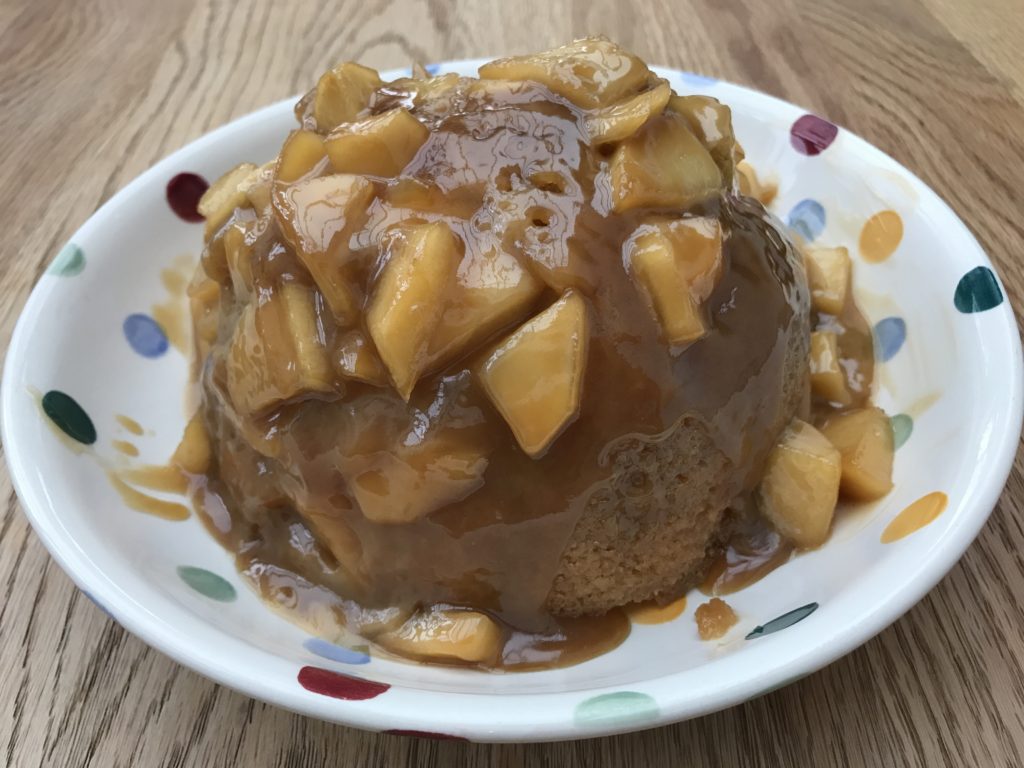 What you end up with is a light sponge covered in a sticky butterscotch sauce and apples which still have a bite to them. Although Galton suggests serving with a cheffy creme anglaise, I was only ever going to drown my pudding in cream. 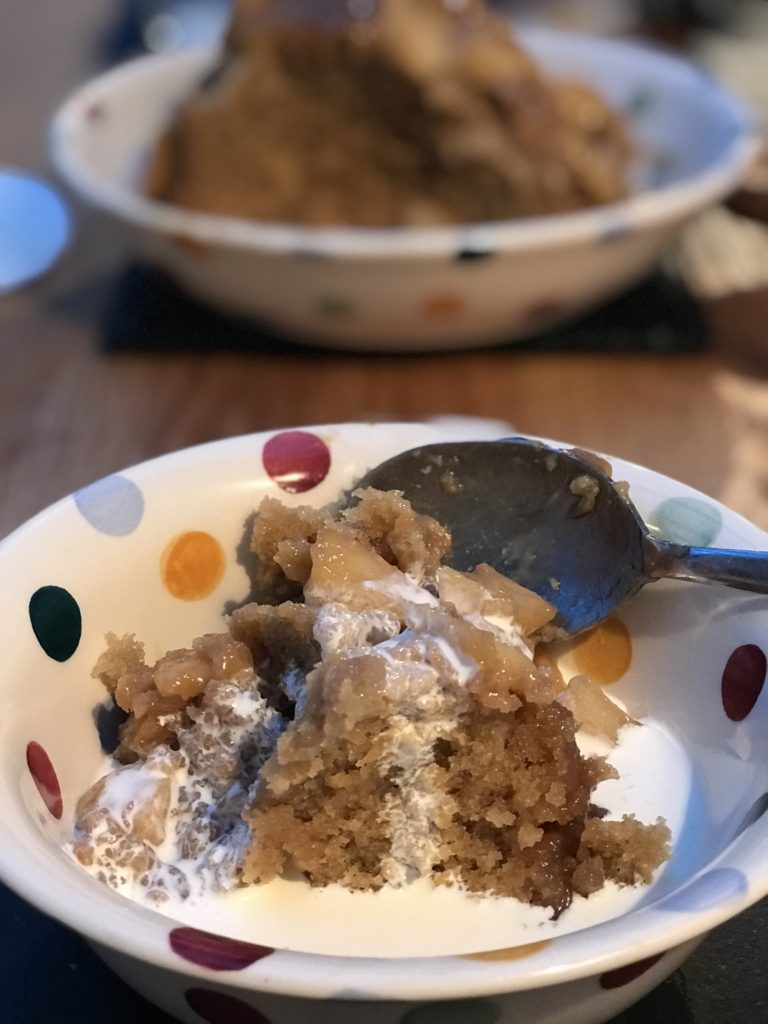 This is such a good pudding that I will definitely make it when we have friends over for Sunday lunch one weekend. You can make the butterscotch sauce in advance and just throw everything together at the last minute, and then stick the pudding on to steam as you get the roast out of the oven to rest.

As usual, I am entering this in Jenny from Mummy Mishaps’ Great Blogger Bake Off linky – head on over to her site to see what the other bloggers made, and don’t forget to read her latest round-up.

This is based on this recipe, but I did the following. Firstly butter a 1.5l pudding basin, and lay your cored and unpeeled apples at the bottom of the dish. Then make the butterscotch sauce by melting the butter in a saucepan and adding the sugar and vanilla extract. When the sugar has dissolved and the mixture comes to the boil, add the double cream and stir. Once again bring to the boil and simmer for a couple of minutes. The mixture will start to thicken so then take it off the heat and allow to cool.

I made the sponge by mixing the butter, flour, sugar and eggs in a freestanding food mixer. Once it was made I poured most of the butterscotch sauce over the apples in the pudding basin and topped with the sponge. Then I covered the dish with greaseproof paper which had a pleat in it, covered that with tinfoil and tied it all up with a piece of string. I placed this pudding dish on a sauce in a large pan. I half filled the saucepan with boiling water from a kettle and put the lid on the pan, keeping the water boiling for 1.5 hours. When I took the pudding out, the sponge was cooked perfectly.