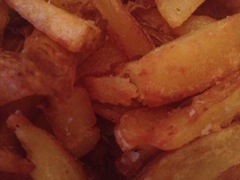 My Grandad would have been 100 yesterday. He made it into his 80s, which was pretty decent considering he was an 80 a day smoker who according to him began puffing before he reached his teenage years, while working the markets in South East London.

He was diabetic in his senior years, but didn’t let something as trifling as blood sugar levels stop him from enjoying his favourite treats. Grandad had a very sweet tooth (in fact he had very few teeth due to the combination of smoking and sweeties and growing up during an era where dentists were not valued – when we were little he used to bare his teeth at my brother and me to scare us, which we used to beg him to do over and over again!), and was often happy to indulge in a doughnut here or a cream cake there. He could in fact be where I inherited my greediness from (although to be fair the whole family were / are like it, so maybe it started even further back).

But the foodie memory which is strongest when I think of my Grandad is chips. Even when my Nan died and he was living on his own (first on the 12th floor of their old council flat in Southwark – famed for being the run down location of Tony Blair’s first speech as PM – and then relocated to sheltered accommodation to be nearer to Mum), he still made himself chips every Monday night for his tea. And I don’t mean oven chips. I mean potatoes ‘hand sliced’ (as the gastropubs like to describe them), soaked in water (there always seemed to be a plastic washing up bowl full of chips soaking in the corner of the kitchen), and then fried to have with the leftover meat from the Sunday roast. I love the admirable amount of effort he went to just for himself.

He had really perfected those chips as well – not at all greasy, and deliciously crispy. No deep fat fryer faffing for him either – he was old school with a saucepan full of boiling oil and a chip basket. I was going to say he took his life into his hands each time he fried his chips, but in fact he did that with every fag he lit, as they would invariably burn a hole in the furniture / carpet / his clothes / the kitchen worktop. As you can imagine, if you are going to smoke 80 fags a day then you are going to have to commit serious time to getting through them all. He always had one hanging out the corner of his mouth or from between his fingers, and I’d usually watch him cooking his chips through a haze of cigarette smoke.

I do remember him explaining to me in great detail the process he followed for cooking his chips, but I am ashamed to say I don’t remember what his tricks were, so I can’t share them with you. But I did decide that the occasion of his would-be 100th birthday merited something in his memory, and so I made (for possibly the first time ever, as I normally just cook wedges in the oven) proper chips. And they were gorgeous.

I say they were proper chips but my Grandad is probably turning in his grave at the very thought (allowing some literary license there – he was cremated, along with his favourite shoe polish and shoe brush as he was utterly obsessed with polishing his shoes). I didn’t have the time nor inclination for the potato soaking or double frying which he probably did. I also decided I didn’t have the time to peel the potatoes and so kept the skins on – I don’t think he would have liked that either. Instead I parboiled the sliced potatoes in salted water and then drained them and fried them in a saucepan in boiling oil (I couldn’t find my chip basket – I am pretty sure I own one). I served them with fish and mushy peas, and it was a pretty perfect Friday night meal. 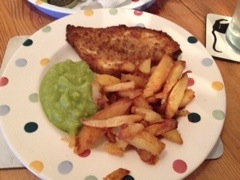 Slice one large potato per person into chip shapes (peel if you like) and then boil for 5 minutes in salted water, until they are just tender. Drain the potatoes and then use the same saucepan to heat the oil. You can tell if the oil is hot enough by dropping a piece of bread into the oil – if it starts to colour then you know the oil is ready, but if it goes black straight away then you need to turn the oil down! I don’t bother with that – I just put a chip into the pan and if it starts to bubble gently then the oil is ready.

I didn’t have enough oil so I had to stir the chips around a bit (cursing the fact that I had lost my chip basket), and they took around 10 minutes to brown nicely – they’d probably take less time if the oil-to-chip ratio was greater.

Drain the chips on kitchen paper and sprinkle with sea salt (again, Grandad would have probably been outraged), and serve immediately.

Grandad was also a bit of a gambler – he loved the horses but he also did the pools and loved a bit of bingo. I was too scared to go into a betting shop to place a bet in his honour (as I don’t have a clue what I am doing) but I did buy two lottery tickets last night for tonight’s draw. Wish me luck! 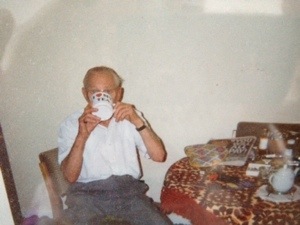