I find I can’t watch The Hairy Bikers now without thinking of Keith Lemon’s The Hairy Lairy Bikers, where they give the finger to everything and anything as they drive around on their little scooters. I can’t really imagine those cheeky, chirpy northerners being chippy in real life, but the sketch is very funny.

Anyway, despite their lairyness or lack of, I’ve been a fan of those hairy bikers for many years, and own most of their cookbooks. I particularly love their food tours of various countries, with Vietnam being my favourite as they visited many of the same places as Andrew and I when we did our tour of South East Asia.

I even like their Hairy Dieters books, although I think some of their recipes still include unnecessarily cheffy touches (cut out the wine and cut out the calories Si and Dave!), but I think that generally it’s their food encountered on their travels that they do best. 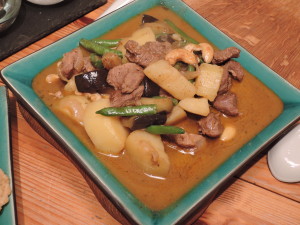 Great Curries is a good example of this – and because it’s a reasonably recent tome they also include lighter versions of classics like chicken korma. There are also recipes for rice, breads and other accompaniments, but as soon as I saw a recipe for duck massaman I knew it was the one for me.

I love massaman curry, rich in Thai spices with thick coconut milk broth. Usually I have a beef or lamb version, but I remember Andrew once raving about one he’d had at Busaba Eathai in London (a Thai Wagamamas – well worth a visit if you encounter one).

I was a little bit disappointed that the recipe calls for a good quality curry paste, but I suppose that makes the recipe more accessible for those who don’t have Asian supermarkets nearby. I am slightly addicted to them, and on the very day I cooked this dish discovered a new Asian supermarket on Holloway Road and bought prawn crackers, fortune cookies, sweet chilli sauce, palm sugar and some other ingredients which simply looked intriguing. My cupboard is full of this stuff!

The recipe itself was simple to make, and you certainly could substitute the duck for another dark meat. However, Ocado were doing a special offer on duck breasts so I was in luck. I’d already bought an aubergine from Ocado so didn’t need to pick up any of the little Thai aubergines I saw at my new supermarket, but it’s great to know that somewhere so local sells fresh Asian produce, so I know I’ll be back.

In the past I have used Barts curry pastes, and found them to be excellent and full of flavour, so used the massaman version in this dish.

I served the curry with brown basmati rice, which I had never cooked before. What I discovered is that brown basmati rice smells like wet dog when it simmers. Luckily it doesn’t taste like anything other than rice, but it was quite disconcerting to smell it whilst I was cooking, and it’s put me off cooking it again! I rinsed it as well, so I have no idea what was going on there … 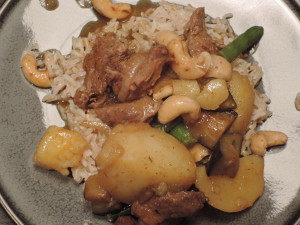 Dice the aubergine and fry it in 2tbsp of the coconut oil – as the aubergine absorbs oil like a sponge make sure you turn it regularly to stop it catching. When brown all over (which takes 5-10 minutes), take the aubergine out of the pan and drain it on some kitchen paper. Wipe out the pan and put the cashew nuts in so they toast in the heat of the pan. Once lightly browned, set aside.

Add the remaining coconut oil to the pan and gently fry the onions until lightly coloured. Cut the duck into bite sized pieces and add that to the pan, along with the diced, peeled potatoes. Stir in the curry paste until everything is coated, then add the coconut milk and water. Pop in the spices, fish sauce and palm sugar, and allow the curry to cook for 15 minutes, stirring now and then to ensure it doesn’t catch.

Then add the aubergine, beans and nuts and cook for a further 5 minutes. Pick out the cinnamon stick and star anise before serving with your wet-dog smelling rice (or forget if you are like me, so they end up nearly breaking someone’s tooth – whoops). 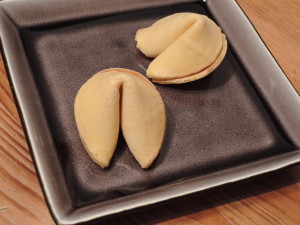 I drank green tea with the curry, served in my cute Malaysian tea set. I was actually going to use the tea set as a prop because I am trying very hard to improve the quality of my pictures, but then realised I could actually use it to make some Asian tea. It was a nice refreshing drink to have with my curry so worth doing … and I do think it makes my pictures look very pretty. My post-dinner fortune cookie told me I would be lucky in business that week, and I did end up receiving some good news at work so there you go, perhaps there is some truth in them ;). 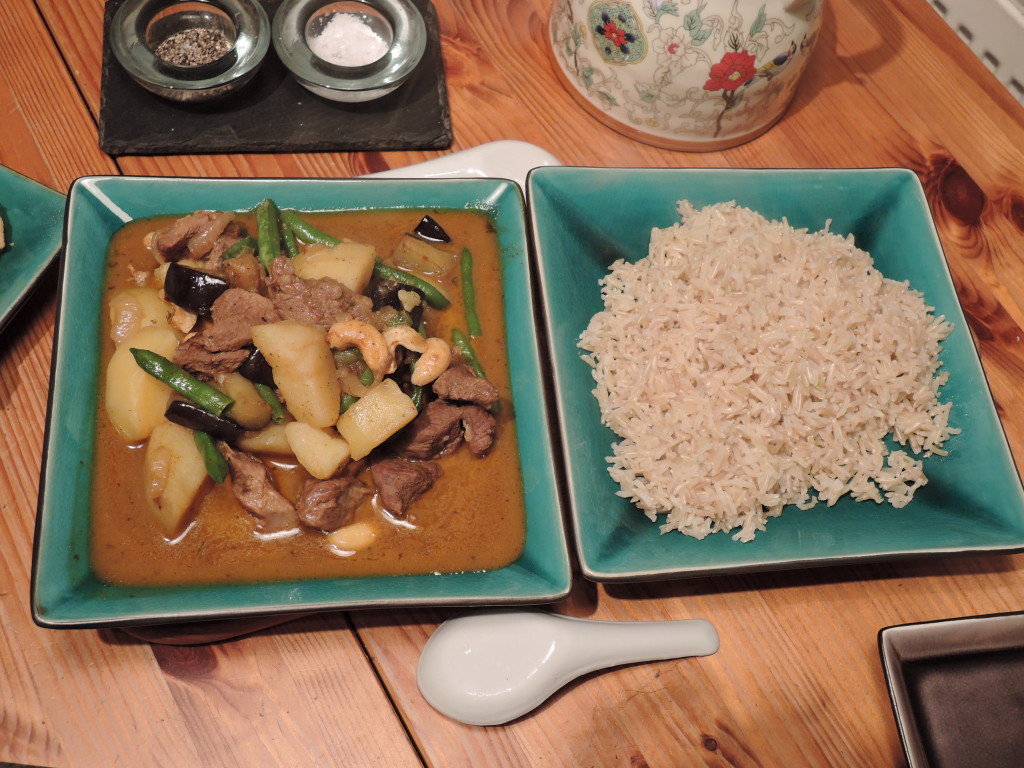