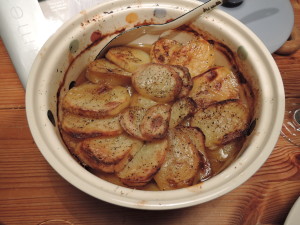 I have been thoroughly enjoying these Cookbook Challenges, where Andrew chooses a cookbook each week (and usually a recipe) so that I can finally make use of the hundreds of cookbooks I own and rarely use. But I am struggling to write up each recipe straight away, and so I really need to be a bit more disciplined about this. 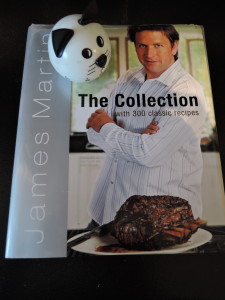 The recipe uses lamb’s kidneys, which I am not particularly fond of, but I left them in the recipe as I decided I’d just pick them out of my portion of the finished dish. Actually the flavour imparted by them was delicious, so even if you don’t like them I’d recommend keeping them in. You could always made the chunks quite large so they are easy to pick out if you are not a fan. Andrew is, so I was intending to put my bits on his plate, but either I ended up without any in my portion or I didn’t notice them and scoffed them!

It’s such a simple dish to make, and tastes so amazing, that I’ll definitely be making it again. James uses typically Yorkshire portions – I reduced his recipe by 1/3 and still made enough for 4 big portions. It is worth making more though – the hotpot tastes even better after a couple of days of sitting in the fridge. Andrew took it to work and made his colleagues very jealous when he ate it at his desk. 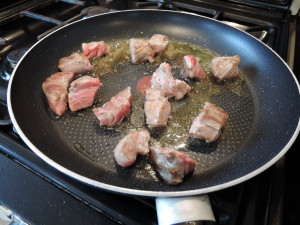 I chose apple pie for pudding as again I wanted something quick and simple. For this recipe, James suggests shop-bought shortcrust pastry, which surprised me as he is known for his puds and I’d assumed he’d be a stickler for homemade pastry. But I wasn’t going to complain – why not cut corners when you can? I had a pack of Jusrol shortcrust in the freezer just waiting to be used, so defrosted it in preparation. 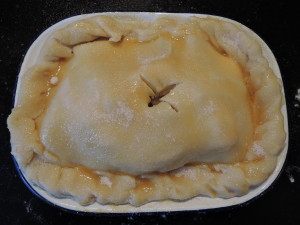 I would normally make an apple pie or crumble with whatever apples are to hand, but bought some Bramleys for this occasion. I’d usually stew the apples first, but James just mixes them with sugar and lemon and then packs them into the pastry raw. Once again, it makes for a super simple dessert, and one I’d certainly make again – it also means less washing up which is a bonus in my book. I particularly liked the flavour of the lemon zest in with the apples – another trick I’d use in future.

These quantities made two small pies, each of which dishes three good portions (I am sure James would think each pie served two, but I think you can get away with three!). I froze one of the pies, and it makes me happy to think it’s sitting there, just waiting to be eaten. I served ours with cream – mainly because I already have a stash of egg whites in the freezer and really didn’t want to put another six in there by making James’ custard. 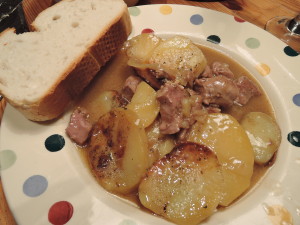 Firstly pre-heat the oven to 160 degrees. Cut the lamb neck fillet and kidneys into bite-sized chunks. Heat a tablespoon of oil in a large frying pan and add a knob of butter. When hot, fry the pieces of lamb neck until they are brown on all sides, then put in an oven-proof casserole dish. Fry the pieces of kidney next, then add them to the casserole. 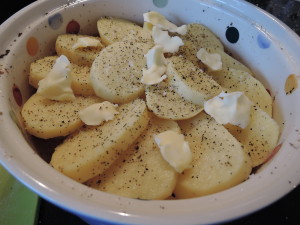 If you need to, add a little more butter to the pan and then fry your sliced onions in there, until they have lightly browned. Tip in the flour and mix it in well until it coats the onions, then add your lamb stock (I didn’t have any so used beef stock made with an Oxo cube!) slowly, stirring all the time to make sure the flour and liquid are blended together smoothly. When all the stock is added, bring the sauce up to simmering point and add the Worcestershire sauce and salt and pepper to taste. Then pour the gravy over the meat and stir everything together, adding the bayleaf and thyme.

Peel and slice the potatoes into 2cm slices (I thought this was too thick, assuming that the potatoes are normally sliced very thinly using a mandolin, but it works!), then lay them over the top of the meat. Season with salt and pepper and dot with butter.

Cover with a tight-fitting lid and bake in the oven for one and a half hours. Turn up the oven for the last 15 minutes and remove the lid so that the potatoes get all crispy. Remove from the oven and allow to sit for 10 minutes before serving. Delicious with crusty bread and vegetables! 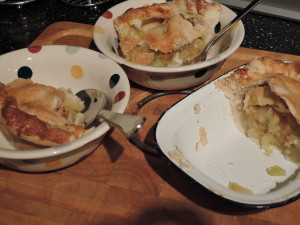 Pre-heat your oven to 190 degrees. Lightly grease your pie dishes with butter. Line the base of each with thinly rolled shortcrust pastry. Peel and chop the apples, mixing with 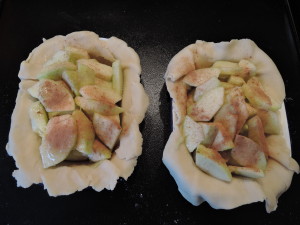 caster sugar, the lemon zest and juice. Divide the apple mixture between the two pie dishes. Sprinkle with cinnamon and dot with a little butter. Cover with the remaining pastry and crimp the edges so they are completely sealed. Brush with beaten egg and make a hole in the top of the pie to allow the steam to escape. Sprinkle with a little more sugar and bake in the oven for around 40 minutes, until the top is golden and the filling is tender. 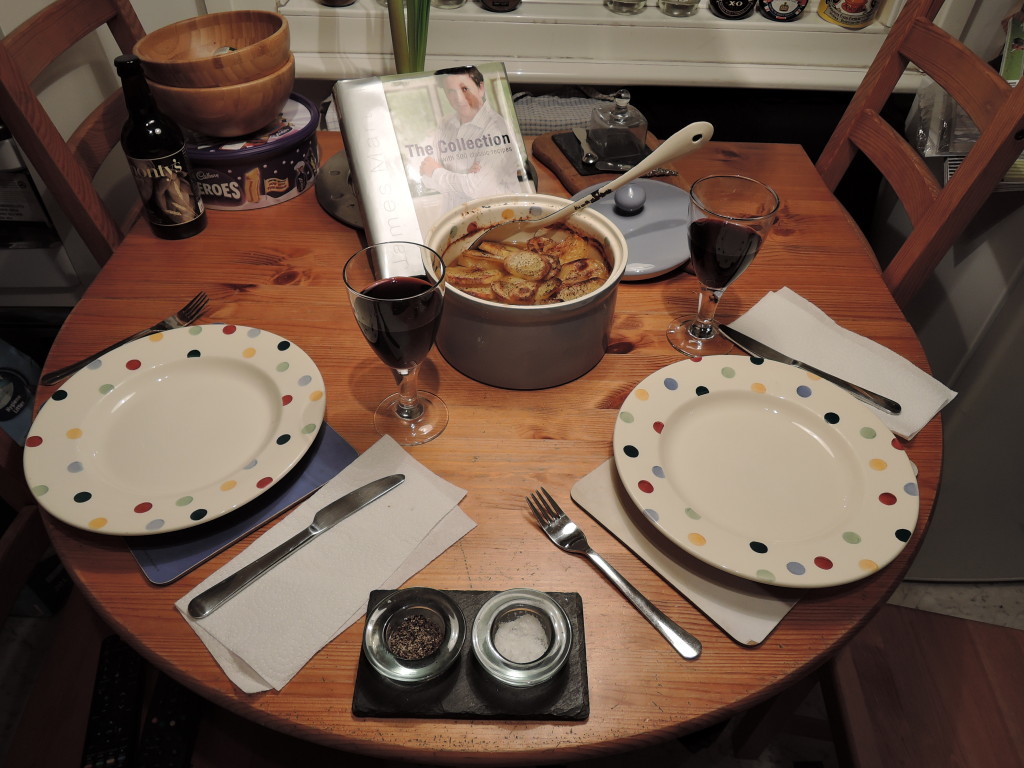 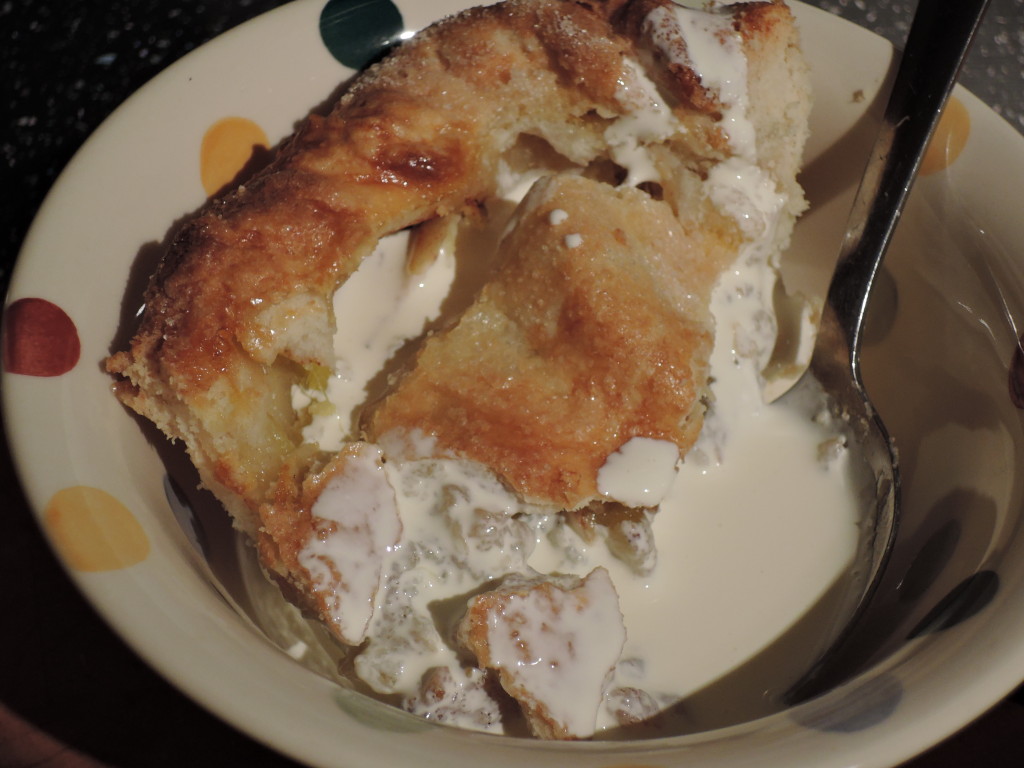