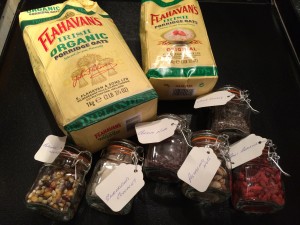 I do love a nice bowl of porridge in the morning. It’s quick to make, warming, lines your tummy and is generally a healthy start to the day. So when Flahavan’s, the porridge people, contacted me to ask if I would create three ‘perfect porridge’ recipes for them if they sent me a few goodies, I said “yes please!”.

I was chuffed to receive not only a couple of bags of porridge, but also a range of little glass cannisters filled with lovely ingredients including chia seeds, gogi berries, coconut, cocoa nibs, popcorn and pistachio nuts. Flahavan’s also sent me a bowl, spoon and mug so that I could enjoy my porridge like a proper little Goldilocks. 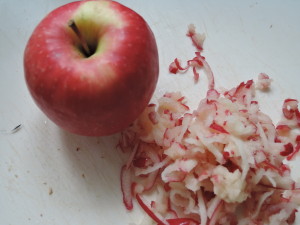 Apple and cinnamon get up and go porridge

My standard breakfast porridge is a simple but delicious one which I have most mornings if I am not going to the gym before work (nothing will convince me that eating breakfast at 5.45am is a good idea!). I make my porridge base: 40g porridge oats topped with 250ml skimmed milk (you can use water if you prefer) and gently simmer it until thick and luscious (I like a thick porridge, not a milky one). Then I sprinkle the porridge with cinnamon (it’s known for its fat burning properties so my thinking is that the cinnamon is helping me lose weight as I eat!), and stir in a grated apple (skin and all). I love using pink lady apples for this dish as the colour of the apple skin is so pretty in the bowl, but of course you could use any eating apple of your choice. 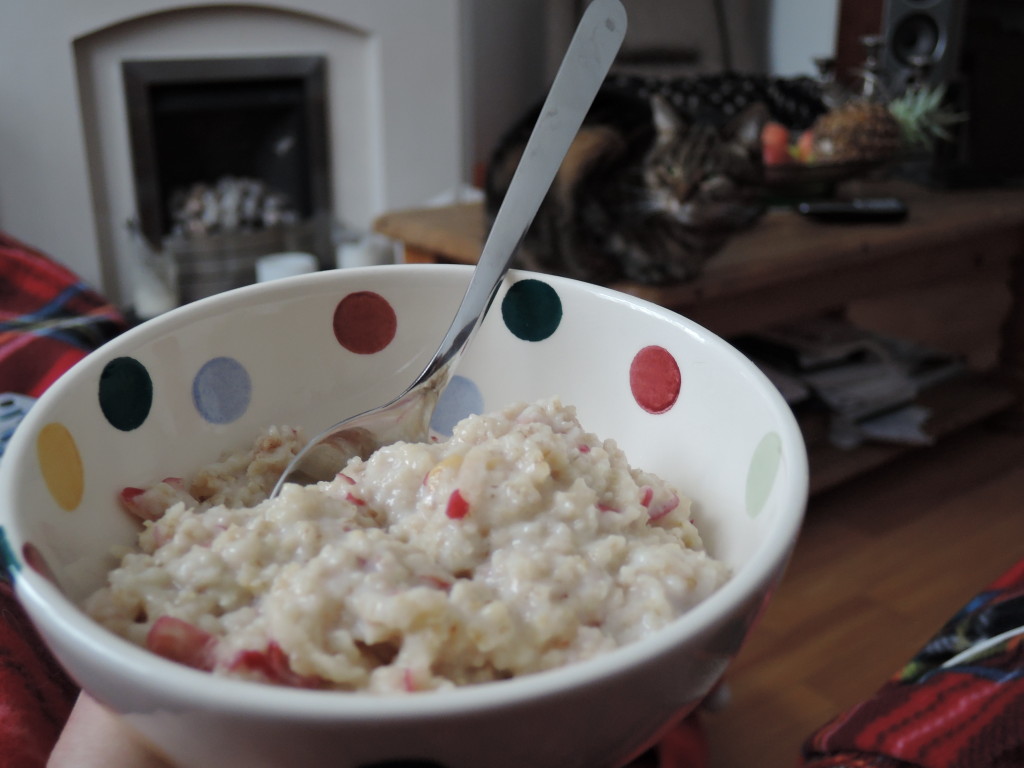 The sweetness of the apple means you don’t need to add any sugar to the porridge. The heat of the porridge lightly cooks the apple so it softens in the milky oats and you end up with a deliciously comforting bowl of goodness, ready to set you up for the day. Perfect to eat whilst curled up on the sofa, covered in a blanket with Saturday Kitchen on the telly! 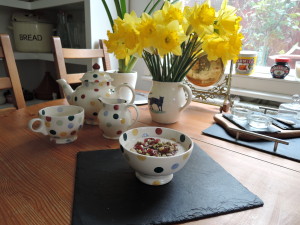 Once again I haven’t altered the base mixture for the porridge here – 40g of porridge mixed with 250ml skimmed milk and simmered for around three minutes until thick and creamy. It’s the topping here which makes the difference, and it’s something which you can prepare in advance and dip into over the week to top your porridge.

I like to stew my plums at least the night before I am eating them, as when they cool they ooze out their juiciness so you end up with a sticky syrup to stir into your porridge. I simply halve and de-stone the plums and sprinkle them with some dark brown muscavado sugar and nestle one or two star anise between the fruit. Cover with foil and bake the plums for 40 minutes or so at 170 degrees until they are soft. Allow to cool covered in foil and the next morning you’ll be left with dark red plums in a rich sauce. Remember to remove the star anise before serving the plums! 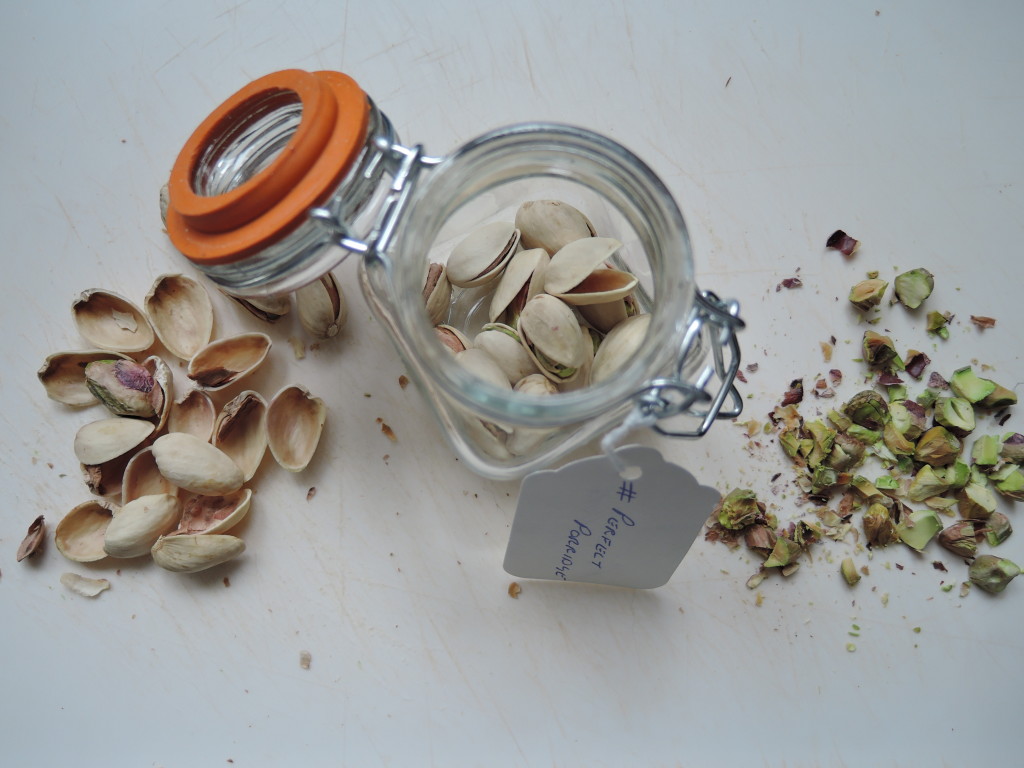 I put the cooked porridge into a bowl, topped it with a couple of spoonfuls of plums and finished with shards of green chopped pistachios. Sit and eat this slowly in the kitchen with a pot of tea: take your time and enjoy the flavours. 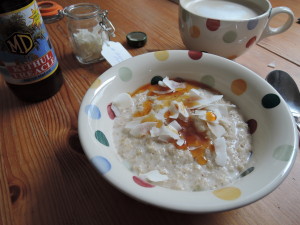 This final porridge is my definite favourite. A few weeks ago I’d made Welsh pancakes – crempogs – for breakfast and drizzled them with Kithul Sri Lankan treacle, and so I had my Sri Lankan holiday of last year on my mind.

There we’d eaten rice cooked in coconut milk for breakfast, and so I thought it would be nice to make my porridge with coconut milk as well. I used half fat coconut milk as I was a bit concerned that full fat would be too rich for breakfast, and used it as my skimmed milk substitute: so 40g porridge oats mixed with 250ml coconut milk (which is almost a whole tin – I think next time I’d make enough for two people by using one full fat tin and then top it up to 500mls with milk rather than open a second tin), simmered for 3 minutes until cooked. 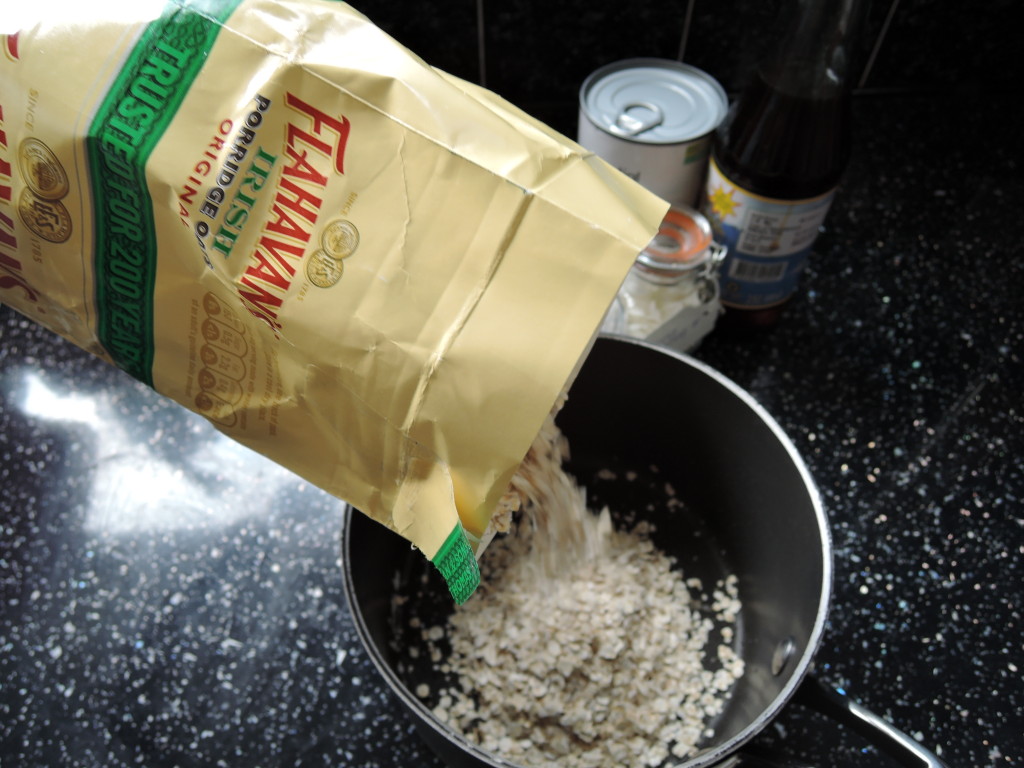 I spooned my porridge into a bowl and topped it with shards of dried coconut and drizzled with Kithul – if you don’t have it then maple syrup would be a good alternative. 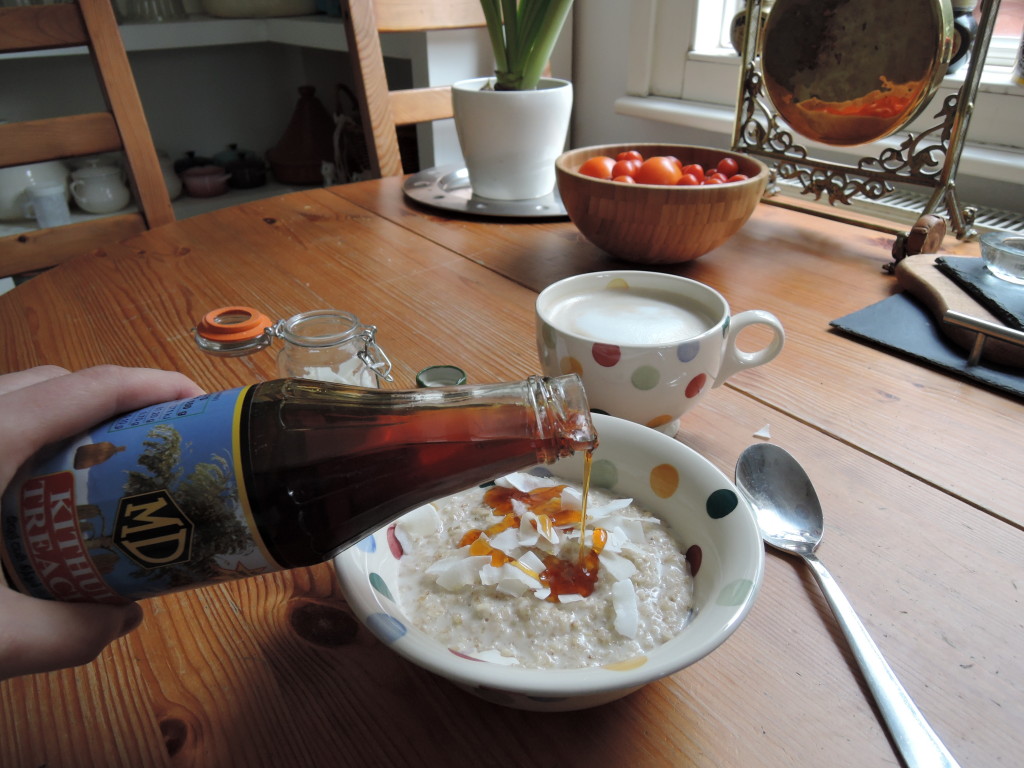 You get a mild coconut hit from the milk, mixed with the comforting sweetness of the treacle, and the bite from the shards of coconut. I can’t describe the deliciousness of this porridge well enough – you’ll simply have to try it yourself. This one definitely is my #PerfectPorridge. 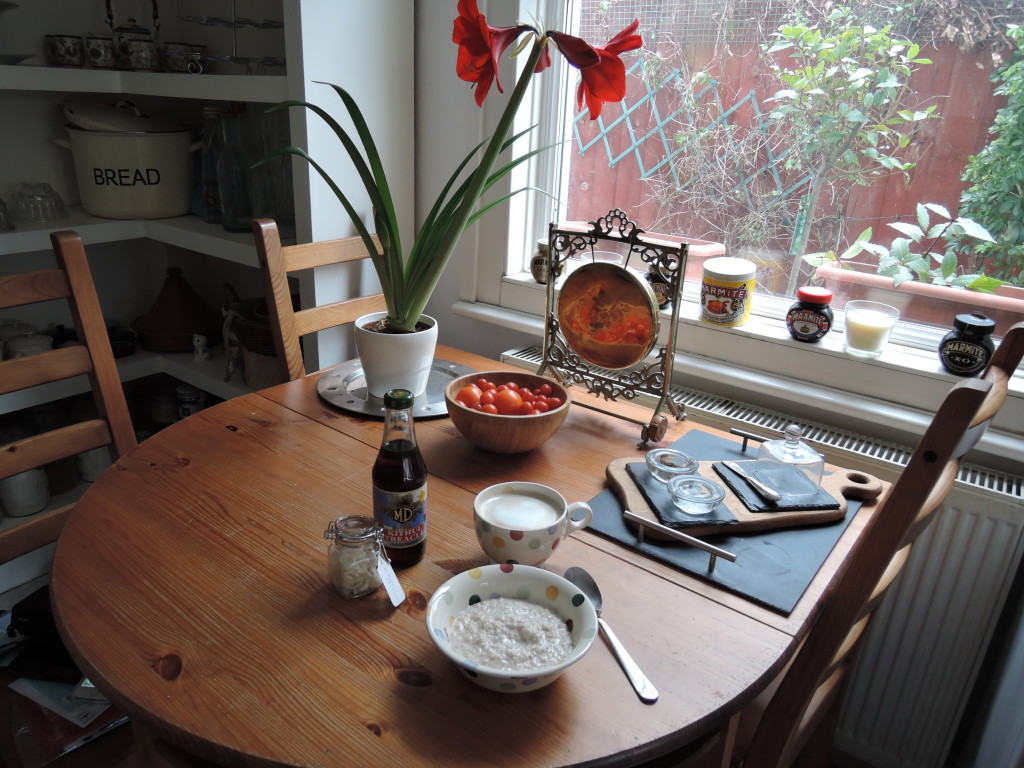 So thanks to Flahavan’s for sending me my box of porridge-y goodness – how do you eat yours?