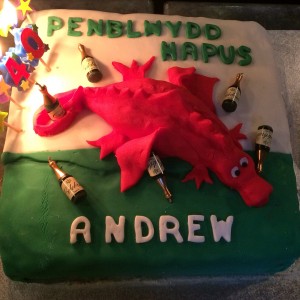 Yes, you did read that correctly: I made a 40th birthday cake of vanilla sponge and it was decorated with a drunken Welsh dragon. Sound strange? Well, it actually was completely suitable for Andrew: it was his 40th birthday, he is Welsh, and he loves getting drunk, so voila!

Actually I can’t take credit for the idea – I spent a lot of time on Google trying to find birthday cake ideas and used various keywords such as “wales”, “beer”, “welsh dragon” and this picture of a cake appeared on my Google image search. My original plan to  create a Welsh flag in icing looked both more difficult (surely the Welsh flag has to be one of the most complicated) and more boring, and so I set my heart on making the drunken dragon … even though the more I thought about a 3D dragon, the more I thought it was well beyond my abilities.

And then the cake itself … regular readers will know that my previous celebration cakes (for Henry’s christening and Danny’s 40th) have used a very reliable and robust chocolate sponge. But Andrew doesn’t like chocolate, so I needed to find an alternative recipe. 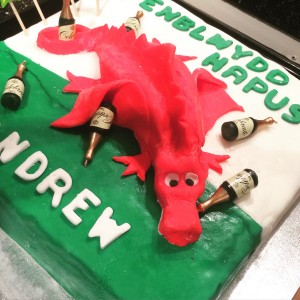 I finally settled on this one from BBC Good Food, with the ingredients multiplied and a few tweaks shared below. As with my previous cake baking escapades, for a cake which was to be eaten on Saturday I baked it on Wednesday, buttercreamed it on Thursday, and fondant decorated it on Friday.

I was terrified that the icing would melt as we happened to be experiencing the hottest temperatures on record for July, but it seems that fondant icing is surprisingly robust (I was advised by fellow food bloggers not to put the iced cake in the fridge though). We were still eating the cake a week later (hmmmm, maybe I over-catered a little) and it still tasted fresh and had a moist texture, so I highly recommend this recipe.

I did have a couple of minor disasters: a 15-egged mixture needs a big bowl and so I hadn’t intended to use my KitchenAid freestanding mixer to cream the butter and sugar and mix in the eggs. However, as I stuck my hand blender into the butter and sugar, it exploded across me and the kitchen, which wasn’t much fun to clean up. 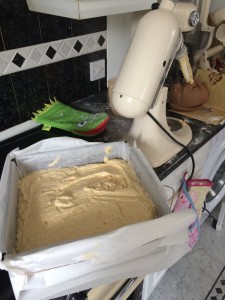 So I transferred what was left of the mixture to the KitchenAid and used it for as long as I could (before the mixture overflowed), resulting in a curdled mixture. However, the addition of the last of the flour and yoghurt (I am now a big fan of yoghurt in cake, having never tried it before) brought the mixture together, and it baked perfectly. The syrup which you pour over the cake as it cools was no doubt responsible for the moist crumb of the cake, so that’s another tip I will be re-using.

The next day I sliced the cake into three layers (confidently, knowing from past experience that it’s easy enough to glue any mistakes back together with icing) and sandwiched one layer with vanilla buttercream (my own recipe) and one with strawberry jam. I used the remaining buttercream to ice the outside of the cake and then stored it in the fridge until the following evening’s decorating adventure.

Up until this point, Andrew was aware of what I had made. However, I had decided to keep the actual theme and decorations a secret, so I had to ban him from the kitchen on the Friday night so that I could work on my Welsh dragon creation. 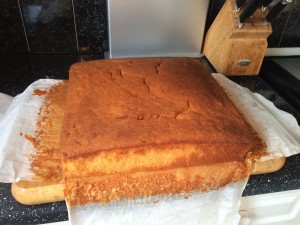 As I stood hunched over the kitchen counter two hours later, toiling over fiddly icing on the hottest day of the year, I swore to myself “never again”. Then suddenly the dragon started to actually look like a dragon (remember I was making it purely by attempting to copy a tiny photo on my phone) and the cake came together and started looking pretty amazing (even if I do say so myself).

Of course there were still lots of mistakes, which you can see if you look closely: the base layer of white and green icing was bumpy and lumpy, and I can’t figure out how to neatly ice the corners of a square cake. I definitely need to go on a cake decorating course to learn some of the tricks of the trade. But overall I was delighted with the results of my efforts, and as well as looking good the cake also tasted delicious – whereas shop bought cakes often look amazing but don’t taste so good.

Make the cake at least one day before you want to ice it, as it will need several hours to cool down. Prepare a 30cm cake tin by greasing and lining it with greaseproof paper. I also wrapped the outside of the tin with a double layer of paper as that’s what I had done for previous cakes to protect them from the heat. Then preheat your oven to 150 degrees. 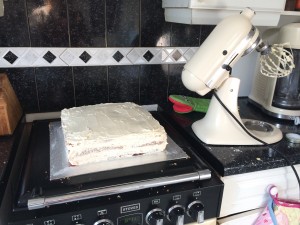 In a very large bowl cream together the butter and sugar. Add your eggs one at a time, mixing well before adding the next egg. If the mixture curdles (mine did) then add some flour to the mixture.

Beat the yoghurt and vanilla bean paste into the batter, then add the flours and mix well (it was only at this point that my mixture stopped looking curdled). Add the milk to loosen the mixture (it should have the consistency of cupcake batter) and then pour it into your prepared cake tin.

Bake for 2 hours until cooked through (poke a knife into the middle of the cake and if it comes out clean, your cake is done). Then allow to cool for 30 minutes before using a skewer  or knife to make a few holes in the cake, and pour the syrup over the top (you simply make the syrup by heating the ingredients together in a saucepan until the sugar is dissolved – simples!). Allow the cake to cool completely before moving on to the icing stage. I wrapped the cake in clingfilm and left it on the worktop overnight. 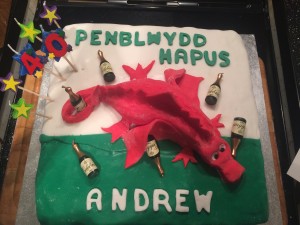 Make the buttercream icing by simply whipping the butter until it lightens in colour, then add the vanilla bean paste and icing sugar. Whisk on high for a few minutes until the icing sugar is well combined and the icing is light and fluffy. Use half of the buttercream to sandwich together the bottom and middle layers of sponge, and use jam (I used a whole jar) to sandwich together the middle and top layers of the cake. I then used the remaining buttercream icing to cover the top and sides of the cake, and then put it in the fridge overnight to stop it melting.

To decorate the cake I first rolled out the white icing to cover the top two thirds of the cake (including the sides). I then trimmed the icing and covered the bottom half of the cake (and sides) with the rolled out green icing. Keep the leftover icing to create your little letters. 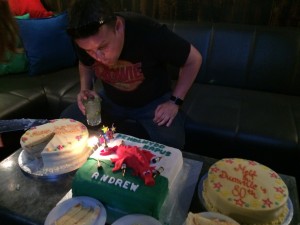 I used two packs of red icing (500g) to shape the dragon – I made a rough head / body / tail shape until I had the size I wanted, and then attached more  icing (from a fresh packet) to make fins across the back of the dragon, his wings and feet. Creating a snout on the ‘face’ of the dragon suddenly make it look like a dragon, and I felt the cake really start to come together. Apart from the cut out letters wishing Andrew a ‘Happy Birthday’ in Welsh, and a few strategically based candle bottles, the cake was done (and had to be hidden in my wardrobe to escape both the heat and Andrew’s peering eyes), and I was ready for an extremely large G&T. 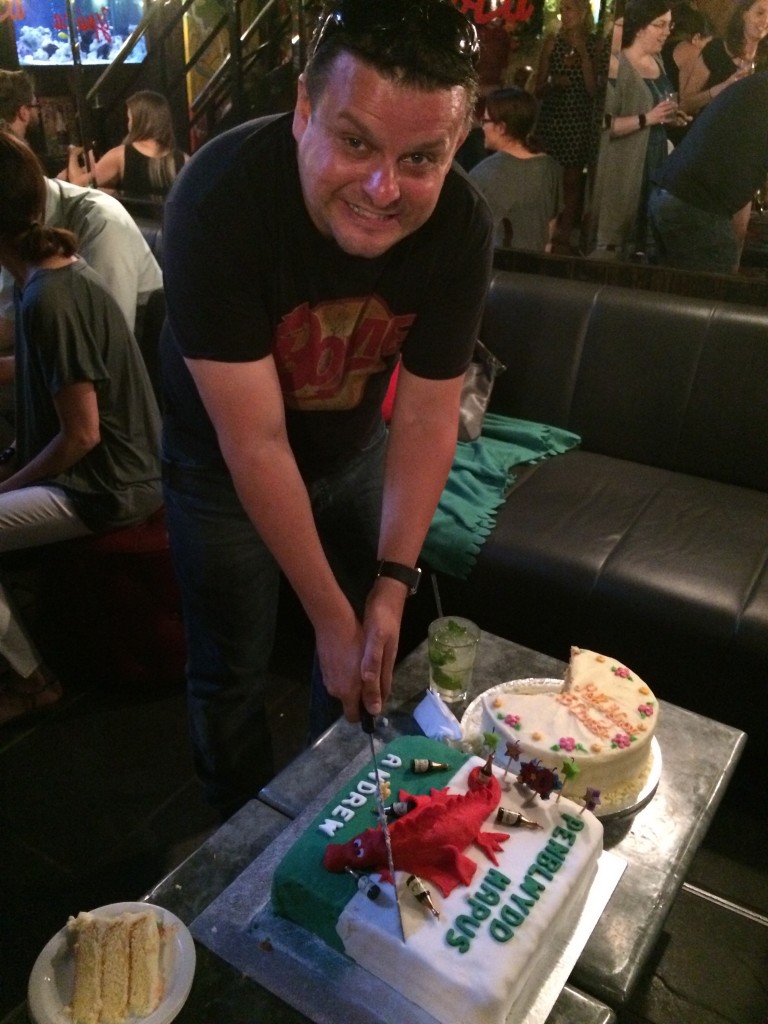 Here are other celebration cakes from some food blogger friends: 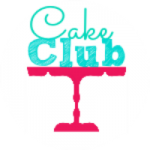 There are loads of lovely bloggers with delicious recipes out

there, and so I am going to enter this blog post into the Kerry Cooks July Cake Club. You can find out more about this and how to enter on her website. And I am entering into Bake of the week from Casa Costello – more on Helen’s website.