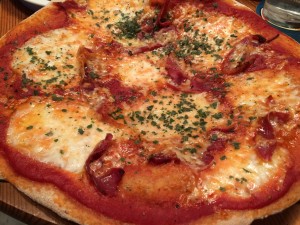 I thought this pizza was going to be super healthy, mainly due to the fact that I made the base with wholemeal flour. It turns out it’s not that healthy after all, coming in at just under 1,000 calories per pizza. However, it’s a HUGE pizza, and much nicer than supermarket versions (or even Pizza Express). Obviously you don’t have to have a pizza each, but I am not called It’s not easy being greedy for nothing! If you like the thick, dense bases of takeaway pizzas, this is probably not for you (although I do like those myself sometimes) – this is a thin crust, crispy, chewy base. And did I mention that it’s huge? 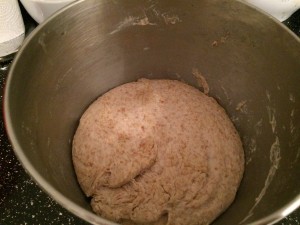 I like simple toppings on my pizza, so just added passata and mozzarella, along with a little bit of parma ham I wanted to use up. But you could add whatever you fancy: just remember that as the dough base is thin, you don’t want to overload it too much. Andrew had parma ham, chorizo and sliced cherry tomatoes.

My recipe makes enough pizza dough for four pizza bases – it’s worth making the whole lot and then freezing half the dough (wrapping it carefully so that no moisture can touch the dough) so that you have the makings of a homemade pizza readily available in the freezer. I have suggested amounts for the toppings, based on what I used for our two pizzas, but of course you can just take this as a basic guide. 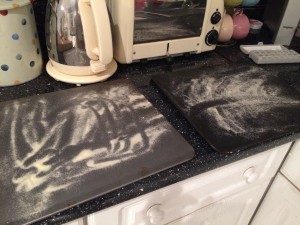 Mix together the flours, salt, and yeast until combined and then add the lukewarm water and stir together. Knead for 10 minutes until smooth (I did this using my KitchenAid with my dough hook), and then cover in clingfilm and put in a warm place until doubled in size (I use my ‘proving cupboard’ AKA the TV cabinet!) – I always find dough takes ages longer to prove than I expect, so allocate two hours for this.

Then you need to punch the dough back down and split it into two. Freeze half (well wrapped in clingfilm and freezer bags) and split the other half of the dough into two for your two pizza bases.

Start rolling out the bases onto a floured surface – you’ll find that the dough wants to shrink back into a little circle, but persevere until you have the size you want (keep it thin!), and then transfer the base onto a baking tray which has been sprinkled with semolina (which helps to make the base crispy). 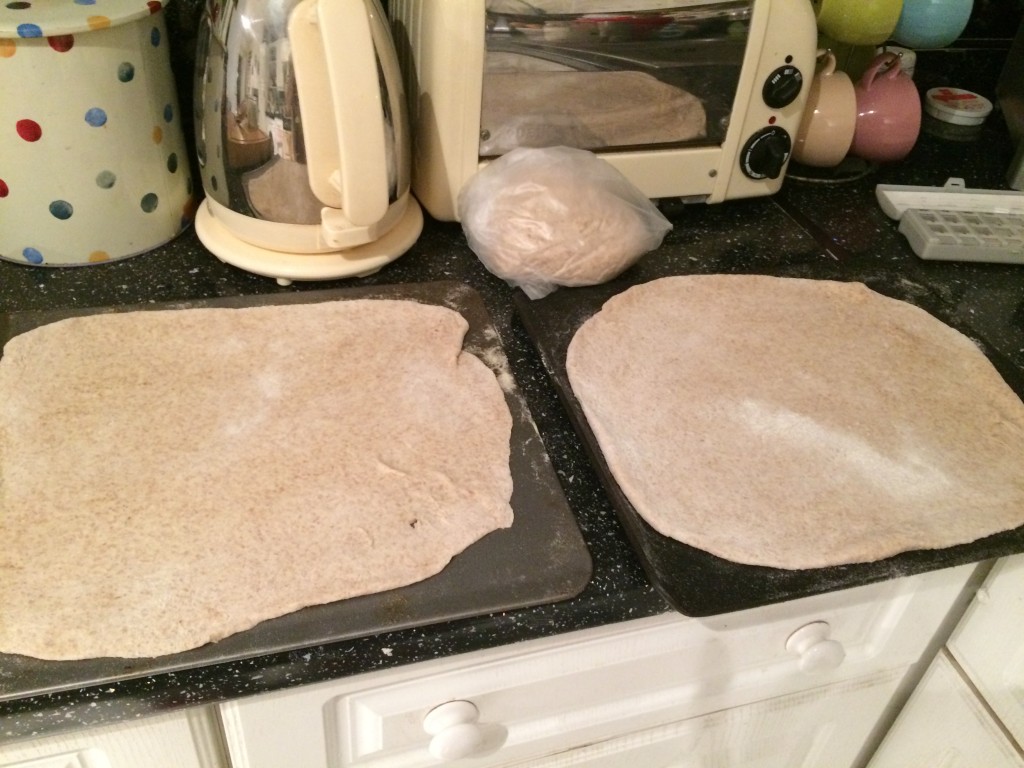 Then spread each base with your passata – one 200g carton is the perfect amount for two bases, and top with sliced mozzarella and sprinkle with the dried oregano. You can also add a little grated cheddar if you have some, for extra cheesiness … 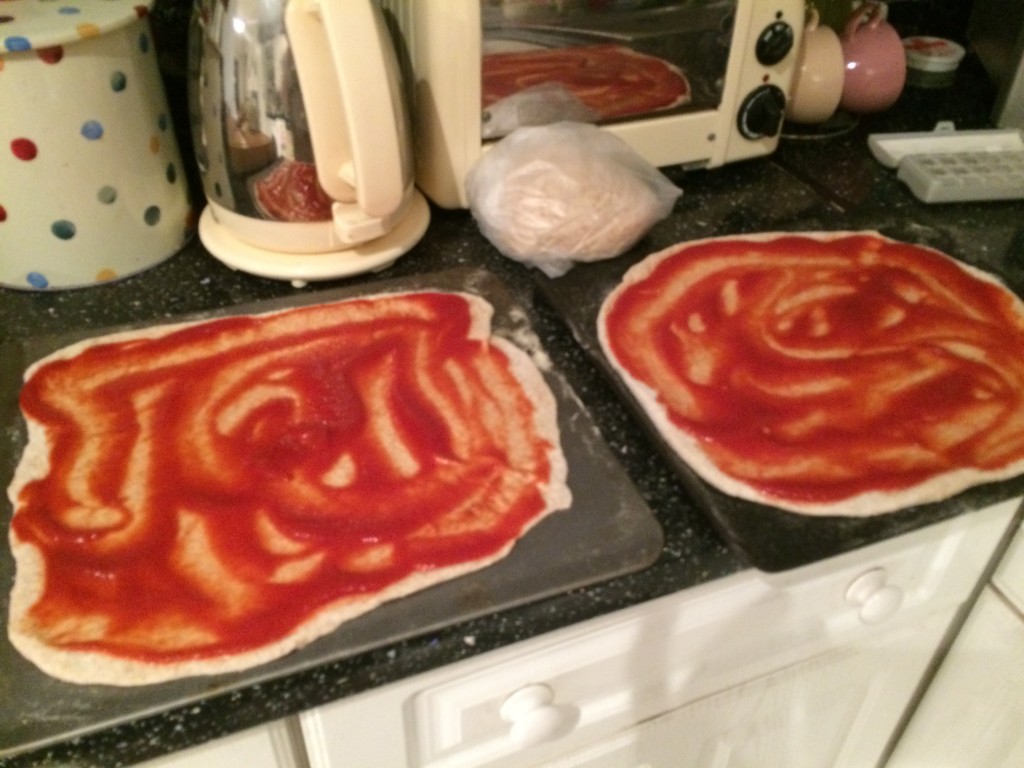 Now, let your imagination run wild with the toppings. As I said, I like to keep things simple, so just used a couple of slices of parma ham which I tore and spread across the pizza. A raw egg broken onto the middle of the pizza would be nice (I didn’t risk it as I imagined it sliding off the pizza down to the bottom of the oven and getting cremated) or some fresh garlic, or thinly sliced peppers or caramelized onions – really, the choice is yours. 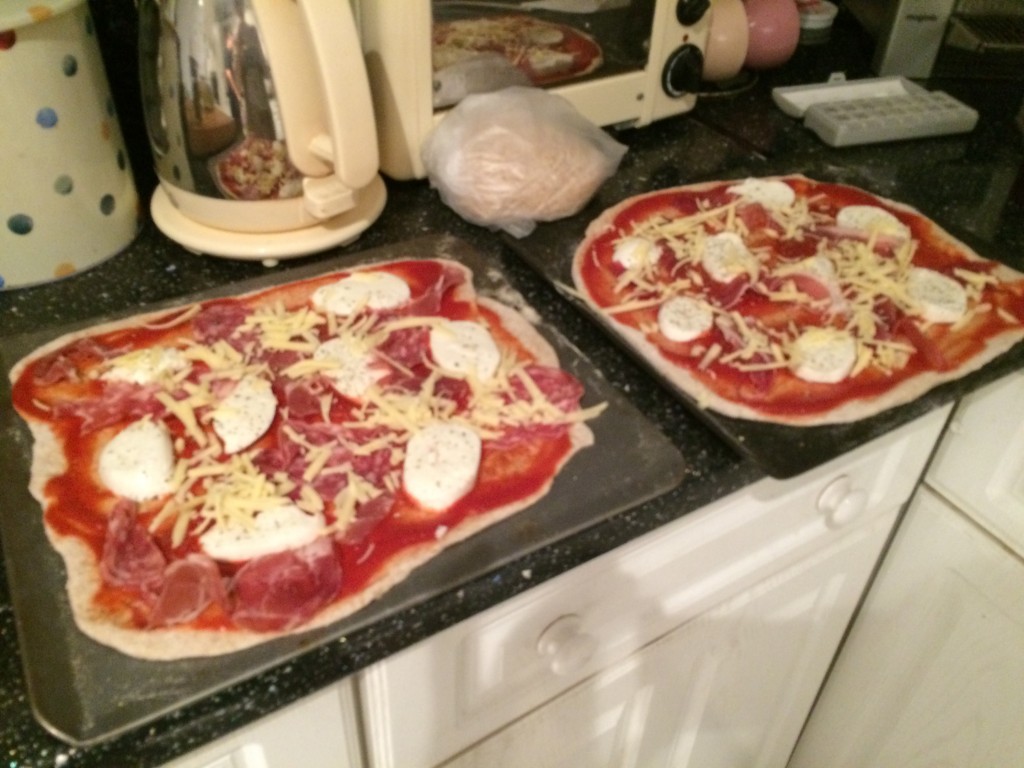 I baked our pizzas in an oven which had been pre-heated to 220 degrees, and the pizzas took just under 10 minutes to be browned to perfection with crispy bases. I always keep chopped basil in the freezer so sprinkled some of that over the top of the pizzas, along with a grind of black pepper. Delicious! 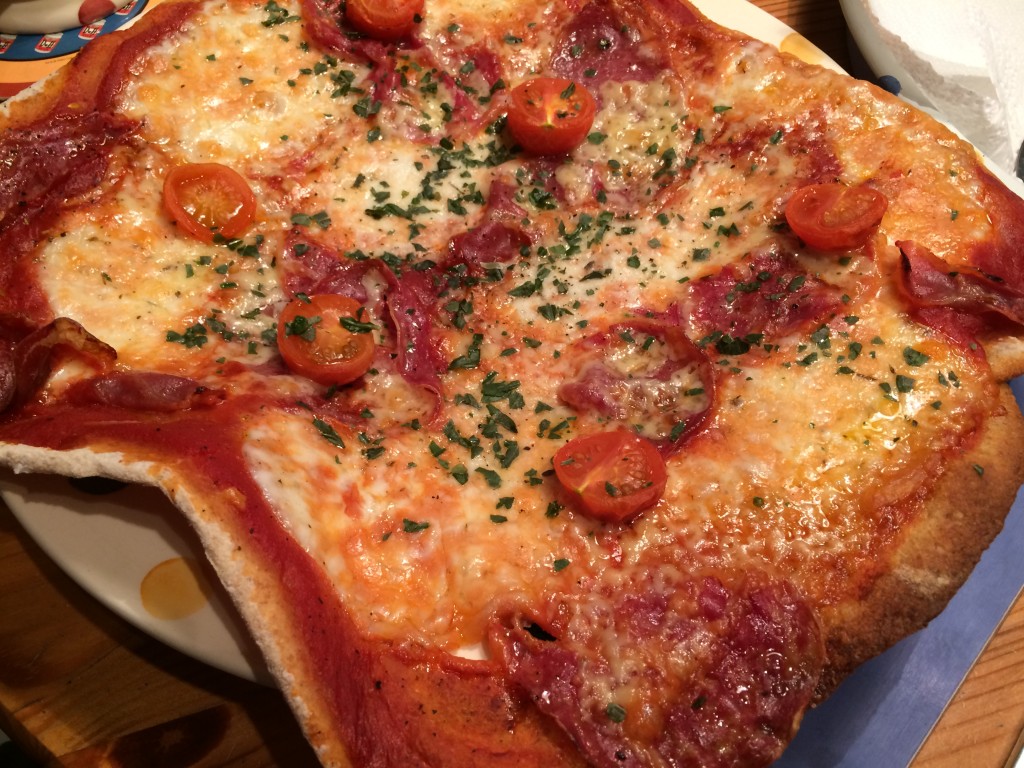 Here are some other pizza options from my blogger pals to whet your appetite further: