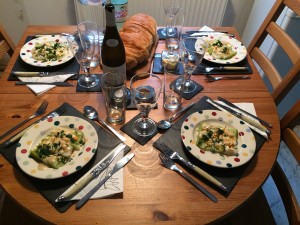 Okay, so the Michelin inspectors haven’t been to visit … you might have guessed that despite the title  I haven’t been awarded a Michelin star (I know, really), but I did cook a Michelin-star inspired meal for our friends Eve and  Paul a little while ago and I wanted to share the menu with you.

I’d only been promising to do so for a year, after they bought be a signed copy of Michel Roux Jr’s book for my birthday (this year’s birthday present was just as brilliant, but I am waiting for the right moment to unveil it, as I’d like it to form part of the new look I have in mind for It’s not easy being greedy), and the time had finally come.

I pondered over the menu for several days (this is something I actually love to do). I wanted to serve food that was Michelin-style in terms of quality, but wouldn’t leave me in the kitchen, unable to talk to our guests (and leave them at the mercy of Andrew’s music choices on Apple TV). Simple but showstopping is not necessarily what Michelin chefs do, but I  managed to find a few options by one of my favourites Michel Roux Jr (from a variety of his books) and put together my menu.

In fact, most of the Michelin-style is in the preparation, and I’d probably make these dishes again without the extra faffing as they would still taste great. Life is too short for peeling peppers and tomatoes, although there is no denying that these little steps do add to the dish (if nothing else it stops you having to extract bits of tomato peel from your teeth – how does it always turn to a red clingfilm style substance when cooked?).

My first course was a relatively simple steamed leek dish, topped with hard boiled eggs and vinaigrette. For four courses plus booze we needed to start light. I am not ashamed to admit that previous dinner guests have had to request to borrow some tracksuit bottoms to wear as their bellies expand from eating my mega-portions, but this kind of behaviour doesn’t sing Michelin, so I had too be a bit more refined. 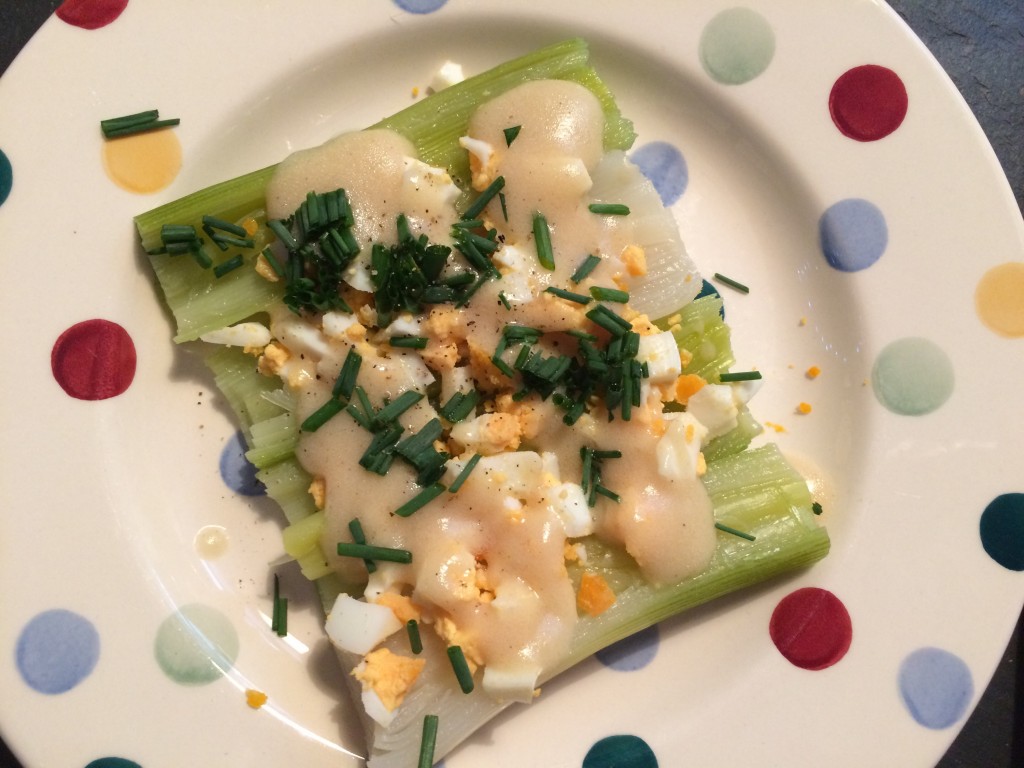 To up the levels of poshness, I served a bottle of Chateau de Tracy wine with this. That’s not a bottle of lambrusco from an Essex Lidl, but a genuine fancy bottle of wine from the Tracy-sur-Loire region of France (I know, hilarious). I came across it when I took mum to Paris for her 60th birthday present (you can see the evidence from that very night as the profile picture of It’s not easy being greedy’s Facebook page), and bought a few bottles from Majestic Wine in London. It’s a Pouilly Fume, and genuinely very decent. Pure class, that’s what you get from a Tracy. 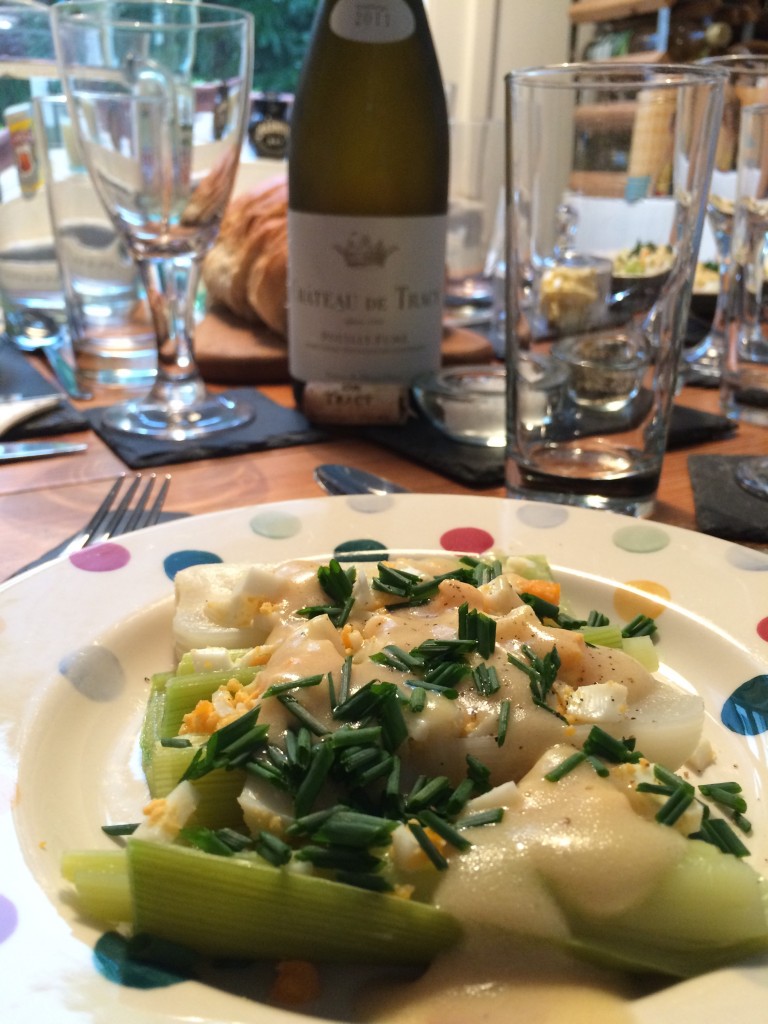 Onto the main course: I had intended to serve monkfish wrapped in parma ham on a bed of piperade, but the monkfish from Ocado came in piddly little fillets which I couldn’t use (I froze them and later made homemade scampi with them). So on the morning of the dinner I popped to our wonderful fishmongers on Green Lanes and picked up some halibut steaks instead. 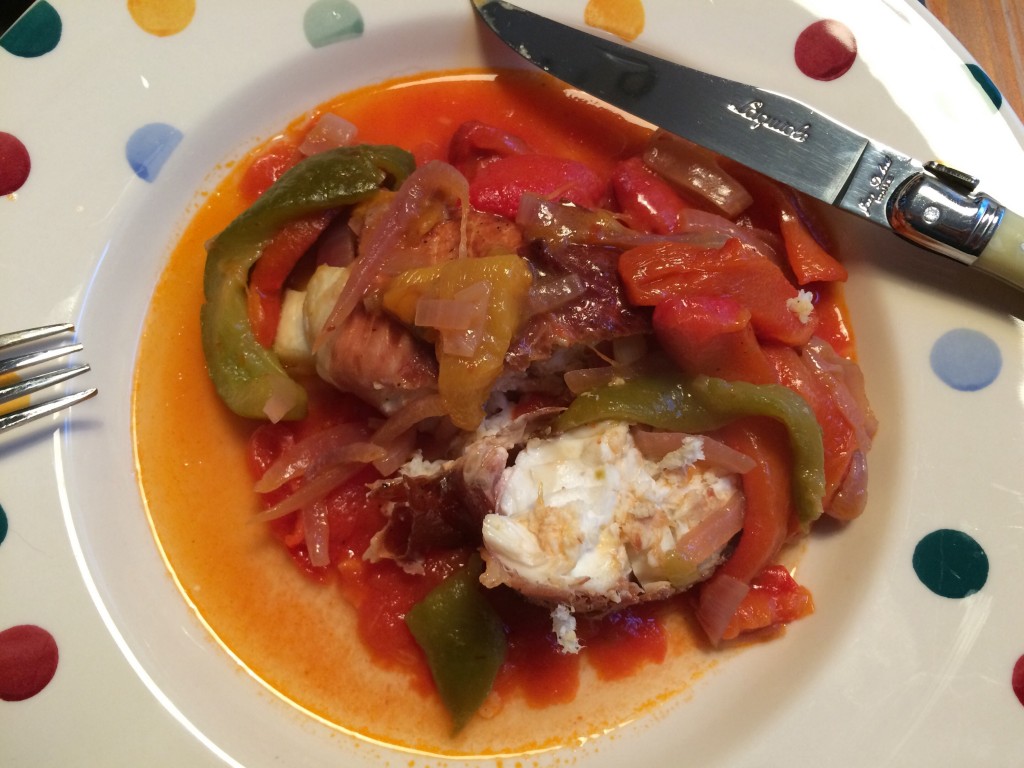 A posh meal isn’t a posh meal without a cheese course, so I served some of my favourite cheeses, including a very runny camembert, Comte, gorgonzola and a lovely Brillat-Savarin. The latter is made with cream instead of milk and so has an extremely rich and creamy texture – a little goes a long way. 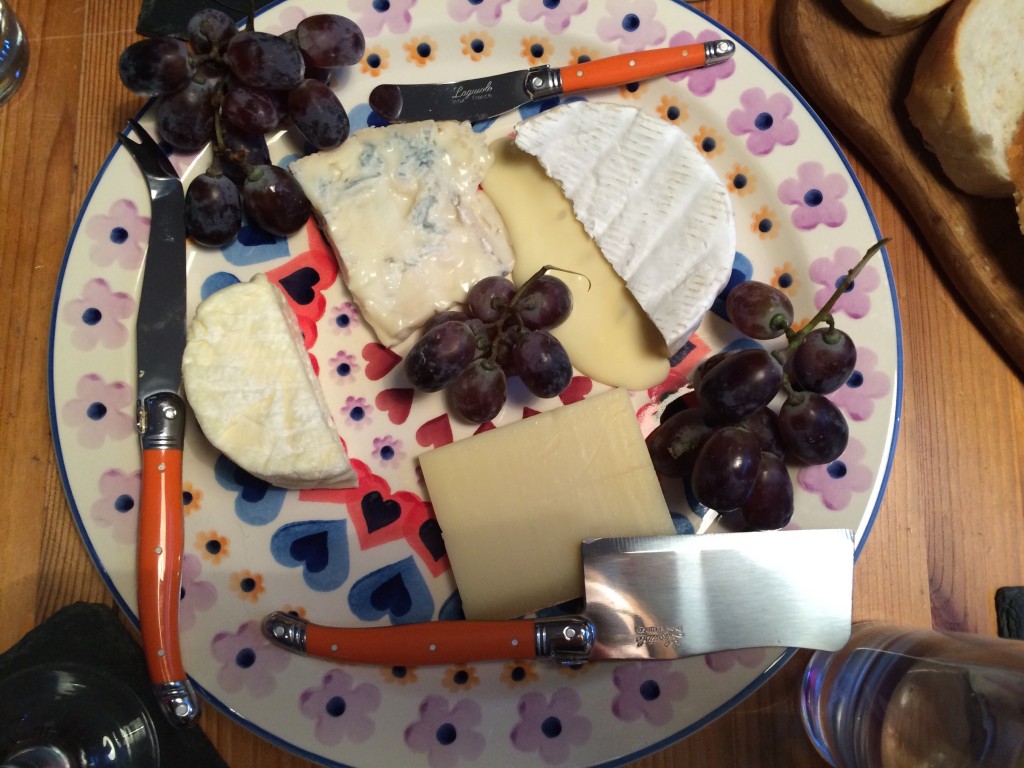 Of course you have to eat cheese with fortified wine, and so that’s what we did. 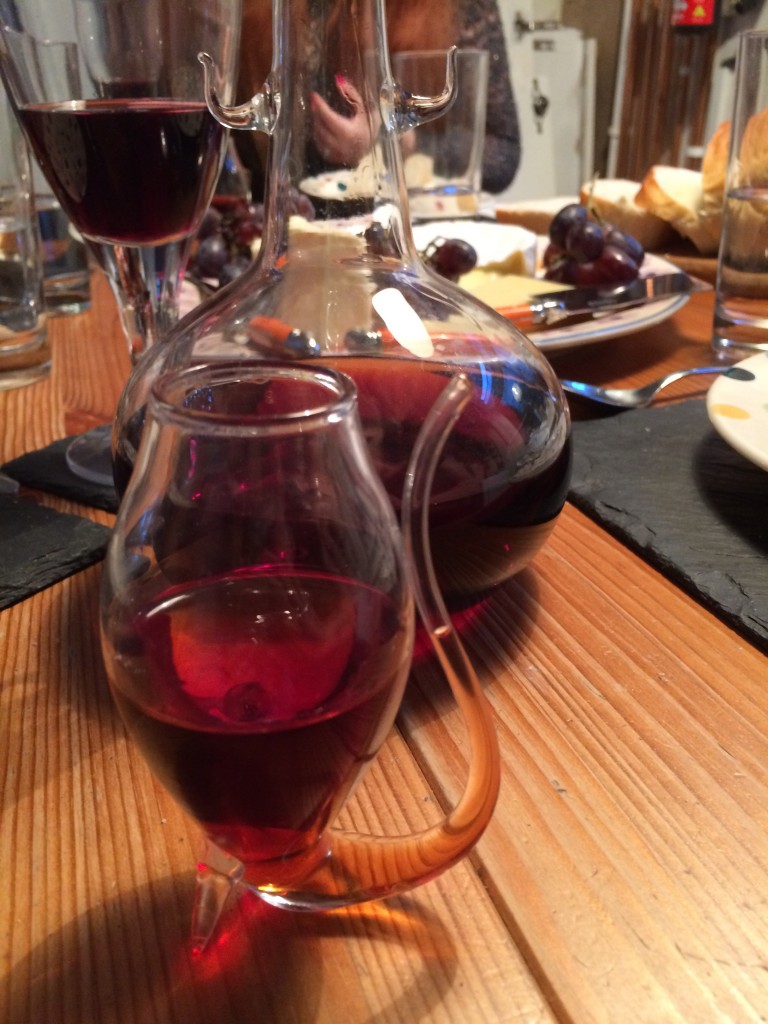 And then pudding. This, I felt, was the least successful course. I’d read about a walnut and caramel tart which sounded delicious, with short, buttery pastry and walnuts mixed with sugar and butter to make a rich caramel sauce. What struck me as particularly appealing about the dish is that it apparently partners well with port, which is Andrew’s favourite (and we already had some open from the cheese course). 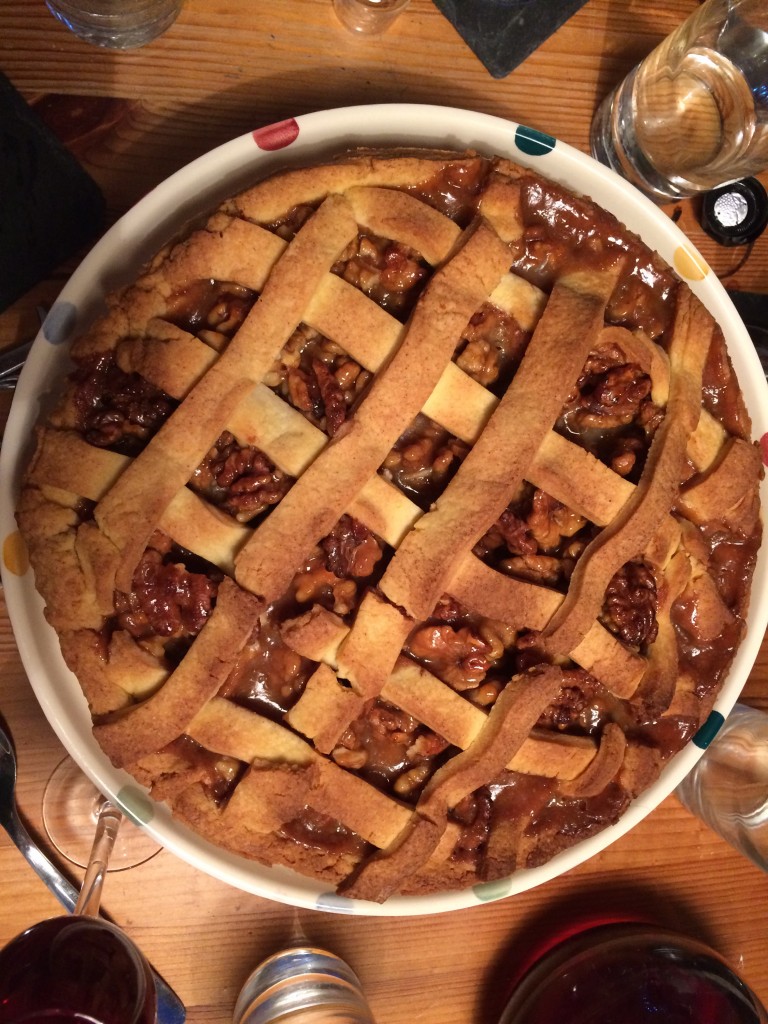 Although the flavour of the tart was very nice – a delicate flavour of walnuts mixed with salted caramel to temper the sweetness of the sugar – the caramel was actually set a bit like toffee, and rather hard on the teeth. I found it disappointing, although Eve and Paul said they really enjoyed it. We all found that the texture had improved the following day (the caramel had softened), so perhaps it’s one of those dishes that needs to settle overnight. 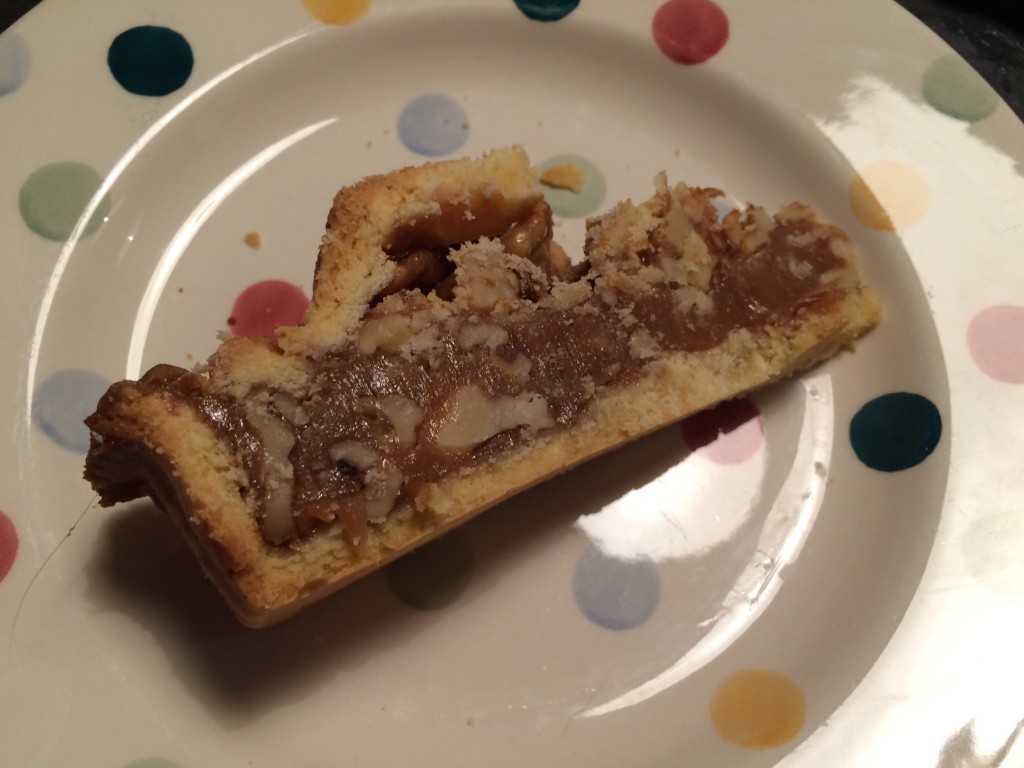 After all that food – and drink – what else could we do but laze in front of the sofa with more alcohol and 80s music videos on telly? Sometimes, you don’t want to be too Michelin eh?