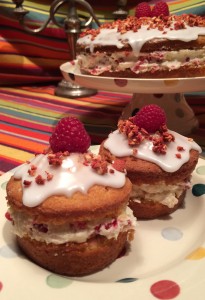 Although I am sad the Bake Off is over for another year, it’s been hard work baking goodies each week … and then eating them. My stomach is looking decidedly large, and I am hoping that without the obligation to bake each week I’ll be able to shed a few pounds. It has been delicious though. So far this year I have made Gin & Tonic madeira cake, an oat shortbread Welsh dragon box filled with cat shaped bourbon biscuits, soda bread, speculoos cheesecake, coconut and pineapple cake, chocolate crunchie frangipane tart (a star baker recipe), chicken and leek pie, cream horns, and oaty millionaire’s shortbread chocolate tart (another star baker recipe). Phew!

For this week’s final week there were three options: a millefeuille, iced buns, and a classic British cake. I didn’t fancy the millefeuille although I would like to make the hat-trick of puff pastry with rough puff, having already made reverse puff and traditional puff pastry. Although I love iced buns they sounded quite hard, so left to me was a traditional British cake.

But what traditional cake to make? Well, surely it has to be victoria sponge right? I thought so, but victoria sponges are really easy to make so not a particularly hard challenge for the final of the Bake Off. How could I make it something special, while still retaining the idea of a classic victoria sponge? Mix it with Eton Mess, that’s how! 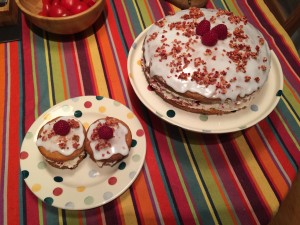 I adore Eton Mess – the combination of thick cream, crunchy meringue and sharp fruit is so delicious, and I thought it would make a good replacement for the victoria sponge traditional filling of jam and cream. And it was. The meringue sweetens the cream as the jam would usually, and the pieces of fruit add tartness to break through the sugar.

I also decorated the top of the sponge with some simple icing and freeze-dried fruit, as these little morsels have a touch of chewy sourness about them which adds another interesting dimension to the cake.

I made one large sponge and two little babies to fulfil the tiered brief from the Bake Off, but you could use the same amount of ingredients and just make a slightly bigger large sponge. I’ve written the recipe below as if it’s just for one large cake, but feel free to scoop off a couple of tablespoons of the mixture to make a couple of little baby cakes if you fancy it.

Once again, Tesco were kind enough to send me a voucher to cover the cost of my ingredients for this post – everything I used can easily be purchased from them, or any other supermarket, except the freeze dried fruit. You probably would find this ingredient in larger Tesco stores but mine was a gift included in a foodie penpals parcel and happened to be in my cupboard. They also have a big selection of baking recipes on their Tesco Real Food baking section. 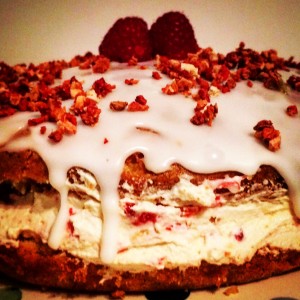 Firstly pre-heat the oven to 160 degrees and line a silicon cake ‘tin’ with paper. Whisk all of the cake ingredients except the milk together in a freestanding mixer until combined, then add the milk to slightly loosen the mixture.

Pour the thick batter into your prepared tin and bake for approximately 40 minutes, until the sponge feels firm when you press the middle, and a knife comes out clean when you skewer the centre. 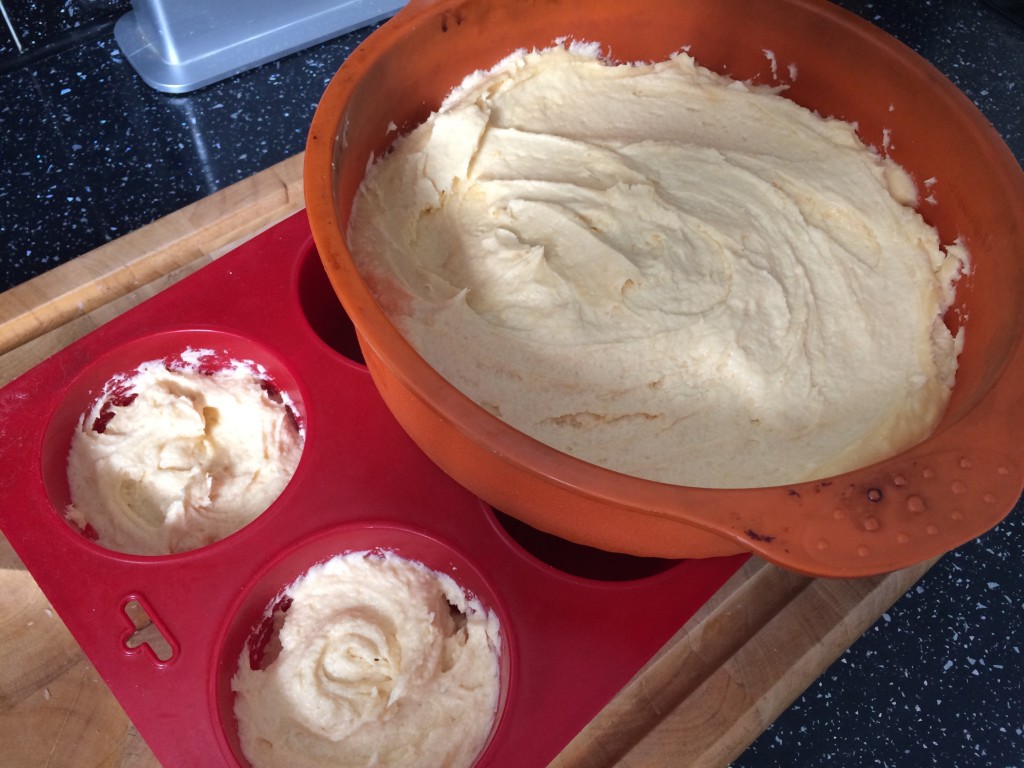 Allow the cake to cool and then slice it through the middle using a sharp knife, to create your ‘sandwiches’.

Whip the double cream and vanilla bean paste together in your freestanding mixer until thick and the cream forms stiff peaks, then crumble the meringue into it, by crushing it in your hands. Unlike with eton mess you want small pieces of meringue, so crush them well. Add the raspberries to the bowl of cream and crush them gently as you stir the cream, meringue and fruit  together. It looks beautiful as the raspberry juice starts to bleed into the cream to make raspberry ripple swirls. 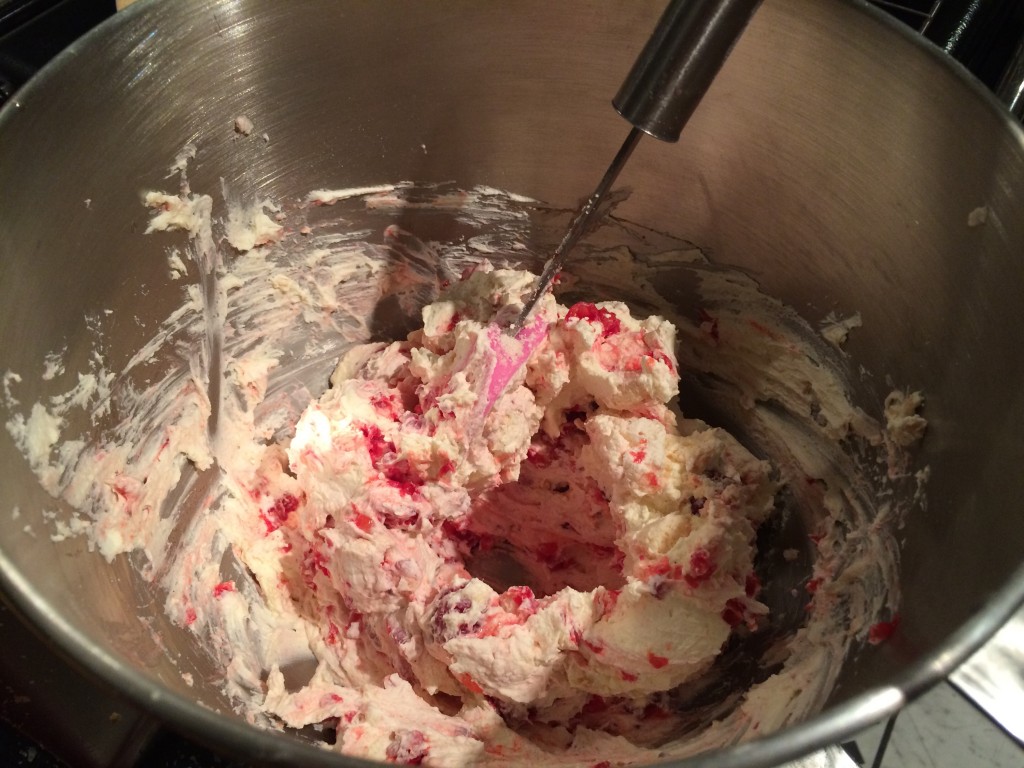 Sandwich the two halves of the sponge together with the eton mess cream. 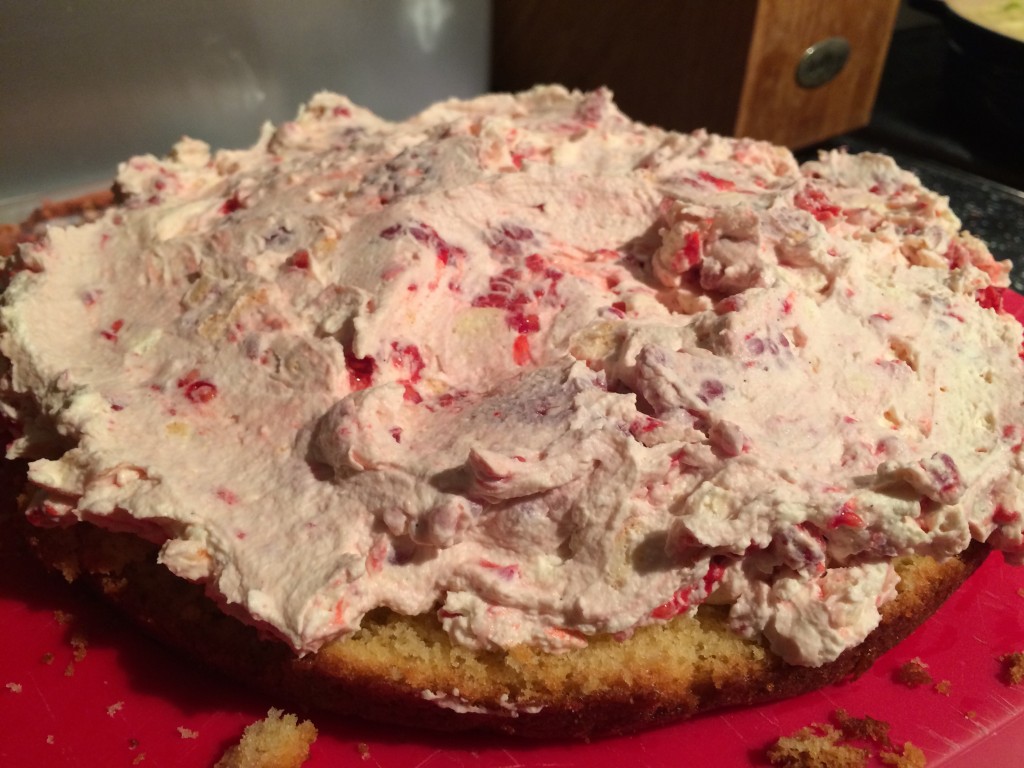 Make your icing by mixing the icing sugar with the barest dribble of water – you want the smallest amount of water possible to make a very thick, spreadable icing.

Spread  the icing over the top of the cake and scatter the freeze dried fruit over the top, then decorate with three fresh raspberries. 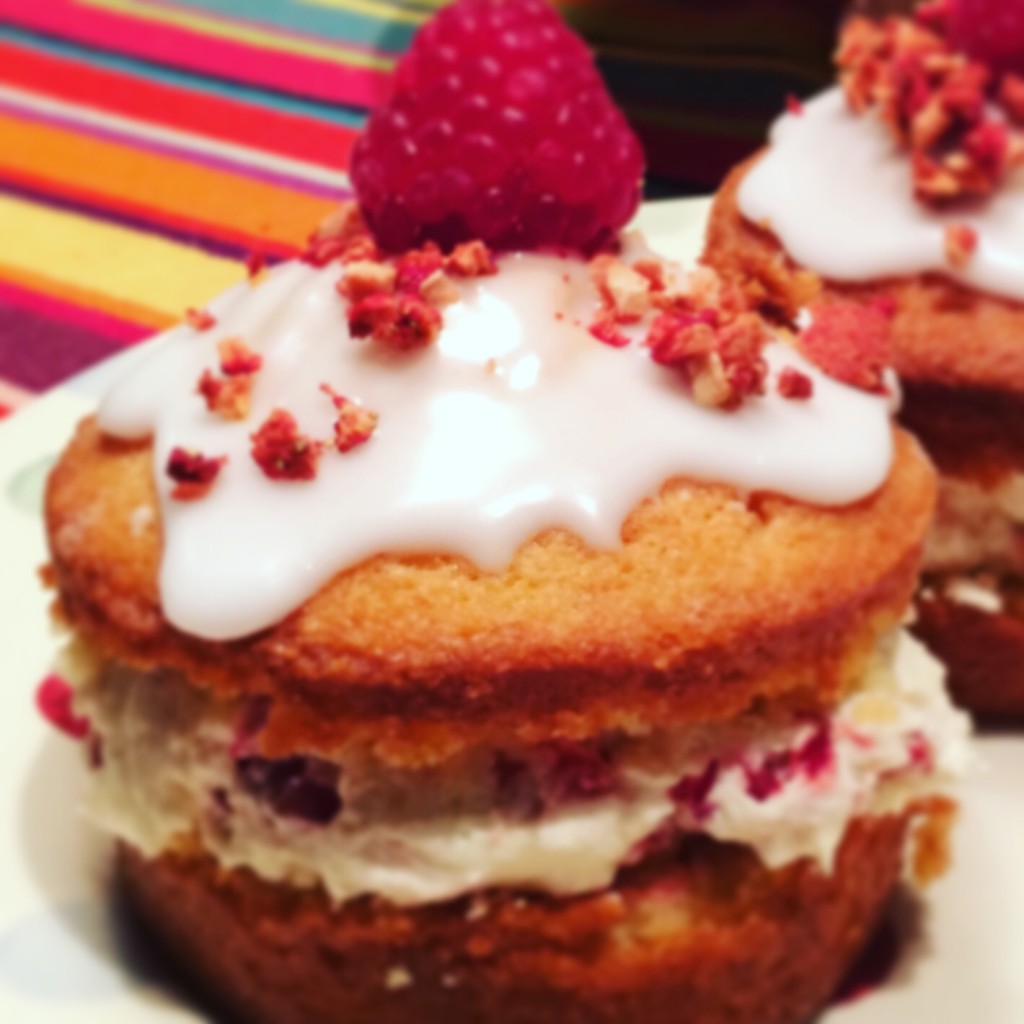 For the final time, I am entering this recipe into Jenny from Mummy Mishaps GBBO Blogger 2015 challenge, which you can read about here. This week’s final challenge is being hosted by last year’s star baker Jacob over at The Boy Who Cooked.  Special thanks to Jenny for hosting such a wonderful competition, and working with Tesco and Stork to generously provide us with ingredients for some of our challenges. And well done to all of the other bloggers who link up to these challenges – some of the bakes have been truly spectacular!

I am also entering this into Kerry Cooks’ Cake Club.