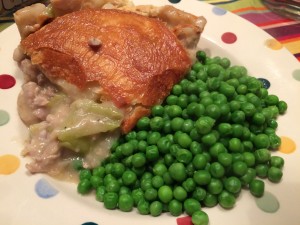 I had never made puff pastry before, but following some recent success with Arlettes (made with reverse puff pastry) I decided to give it a go so that I could make a pie for this week’s Bake Off challenge, and also make some cream horns for next week’s challenge, as I’ll be in Las Vegas on holiday and won’t have time to bake when I get home (that’s dedication for you, but having won Star Baker last week I feel it’s necessary to make a good effort).

The pie challenge on the TV show was for game pie, but I really didn’t fancy that (I like venison and boar, but don’t like game birds, so my options would have been limited), so I decided on a proper comfort food pie of chicken thighs cooked with leeks with a lovely creamy gravy. 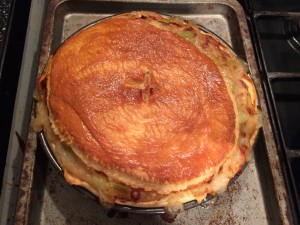 First I had to make the puff pastry, and I found it surprisingly difficult to find a recipe online for proper puff – most recipes seemed to be for rough puff instead and I wanted to do it properly. Eventually I came across this recipe from Them Apples food blog, which was exactly what I was after (by the way, her pie sounds delicious).

Would it surprise you to hear that I couldn’t resist cutting corners? Basically I didn’t have the time after work to keep chilling the pastry in between rolling it out and folding it to make the laminations.

While I was preparing the pastry I also made the chicken and leek filling, as that takes next to no time to prepare and it’s better if you can have the pastry and the filling ready 24 hours before you plan to bake the pie (putting hot filling into cold pastry does not work).

Start by making your puff pastry as that will need to chill for the longest. Mix 50g butter into the 300g flour until it resembles breadcrumbs, and then add the cold water, lemon juice and salt. Mix until well combined and shape into a square and then chill while you prepare the butter. 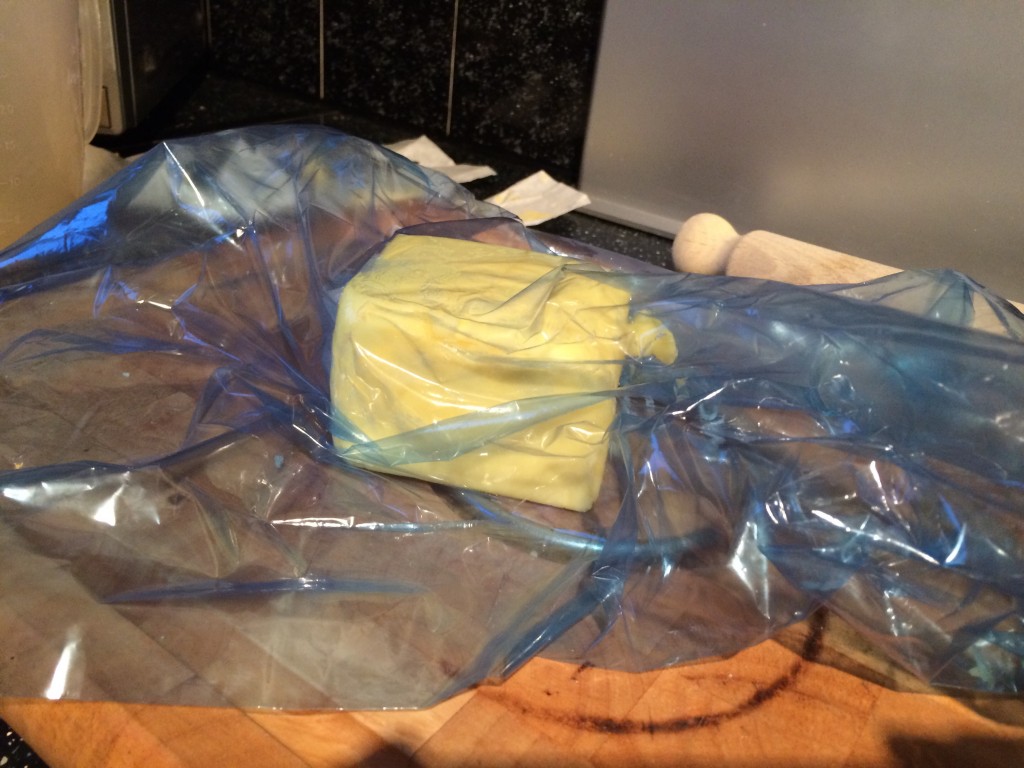 Put 225g chilled butter in between two layers of clingfilm or in a sandwich bag and flatten out a square (17cm square is a tip from Them Apples but I have to admit I didn’t measure mine). Then take out your pastry and roll it out into a larger square (25cm square) and put the butter in the middle, encasing it with the pastry. 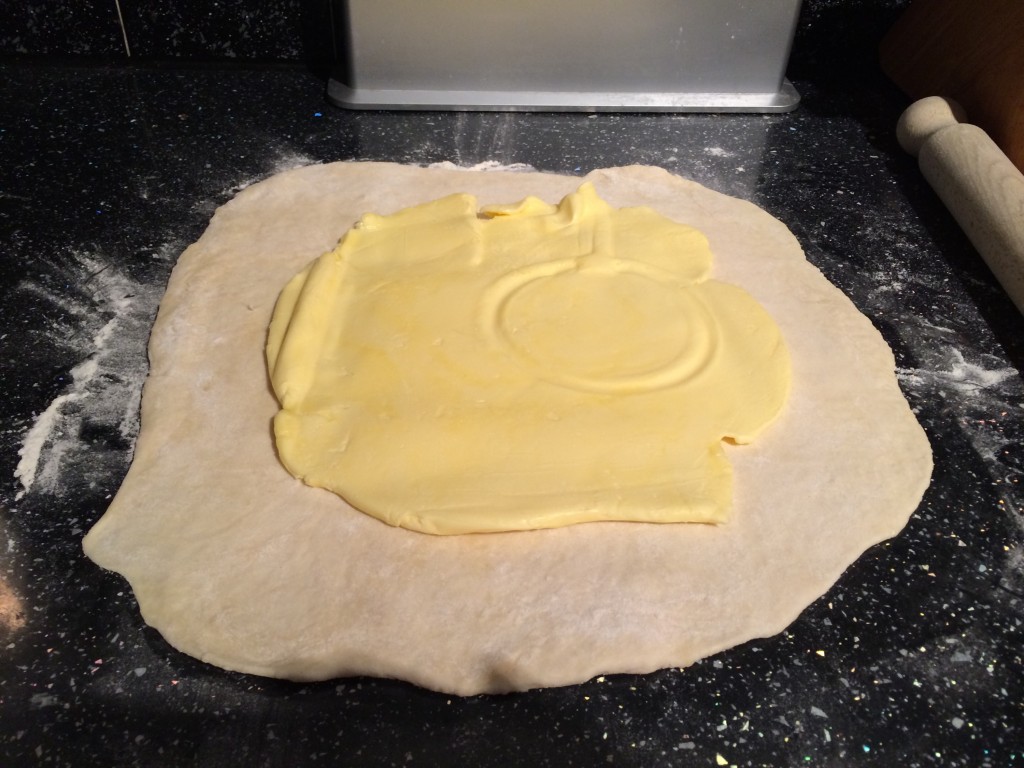 Here’s a great video to show you how to roll and fold pastry. Basically you have to roll out the pastry into a long rectangle and imagine it as three equal sections. Fold the top third down and the bottom third up, then turn the pastry around 90 degrees, roll into a rectangle and fold again, then turn the pastry 90 degrees and roll and fold for a third and final time (you are supposed to chill the pastry in between each roll / fold, which I didn’t bother doing). Chill for at least 20 minutes (or 10 if you are being lazy like me) and then repeat this process twice more, and your puff pastry will be ready. 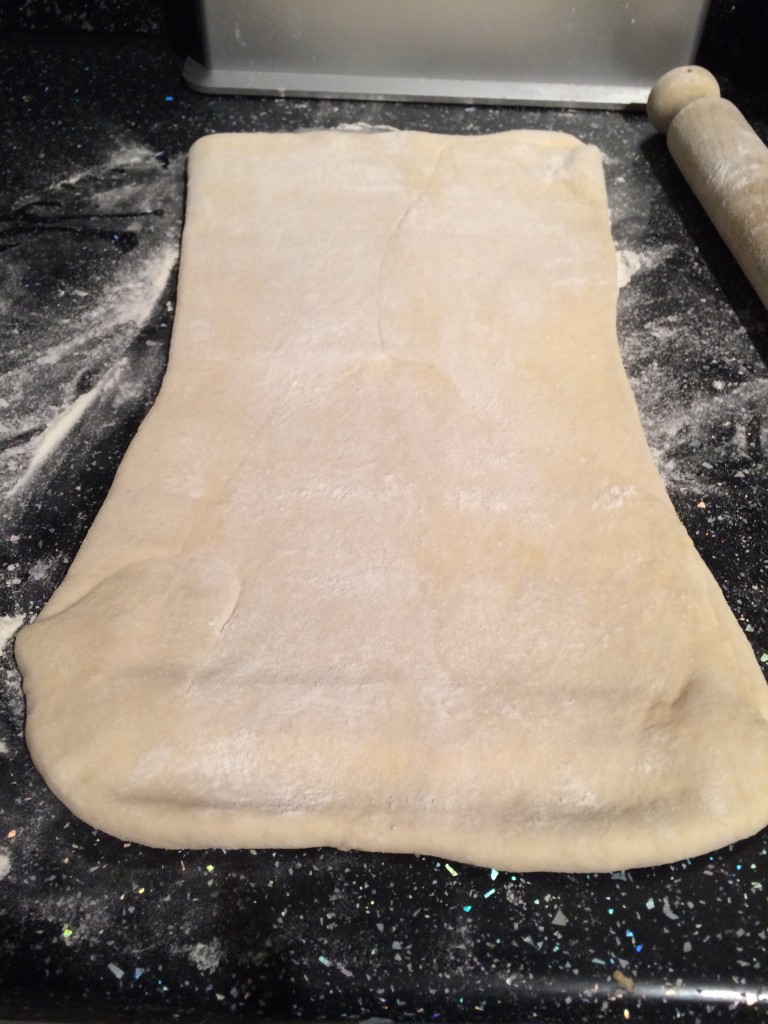 While the pastry is having one of its moments chilling, move on to make the filling. Put the oil into a pan and lightly fry the sliced onion, garlic, and chicken, which you should chop into bite-sized pieces. Add the sliced leeks, thyme and then the spoonful of flour and stir it in. Then slowly add the stock (I made mine with a chicken OXO) to the chicken, stirring all the time until you end up with a thick sauce with no lumps. Cover and simmer for 20 minutes until the chicken is cooked through, and then allow to cool. 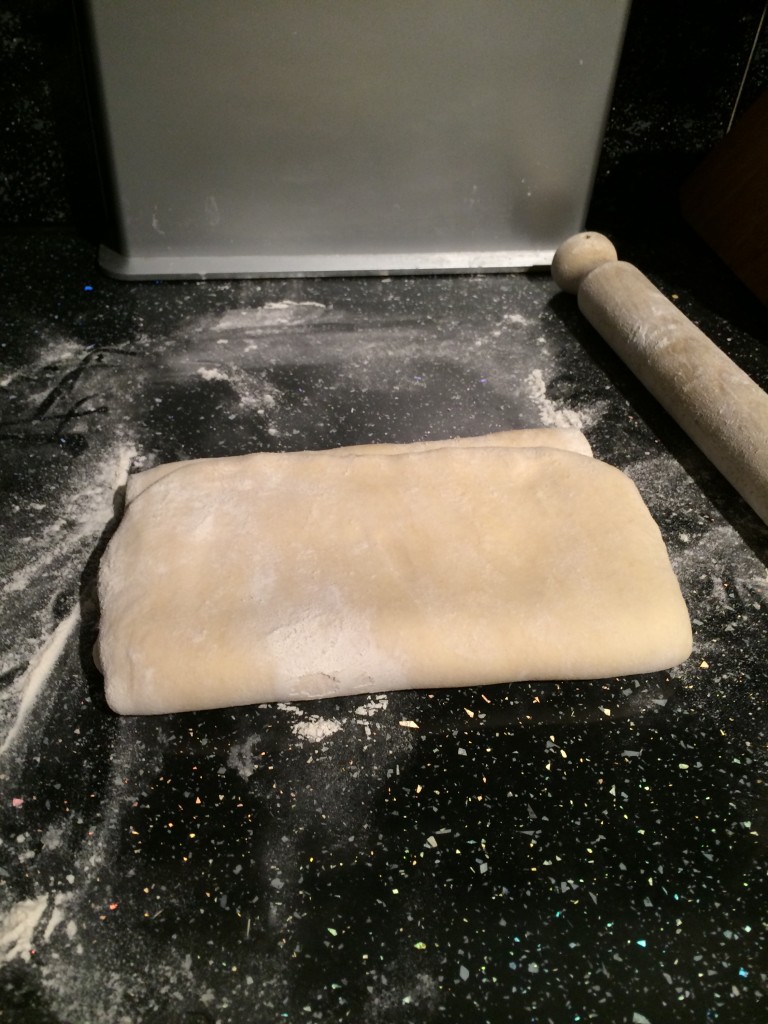 Finally make your shortcrust pastry – I always make mine in the food processor as it’s super quick: blitz the butter, flour and salt until the mixture resembles breadcrumbs and then add the water a little at a time until the dough clumps together in the mixer. Take it out of the food processor and wrap in clingfilm – chill until you are ready to use it.

To assemble your pie, use either a springform or loose-bottomed dish, which you should lightly grease. Roll out the shortcrust pastry as thinly as possible to line the tin and then pop in the pie filling. Brush the edges of the pastry with beaten egg and top with a third of the puff pastry which has been rolled thin. 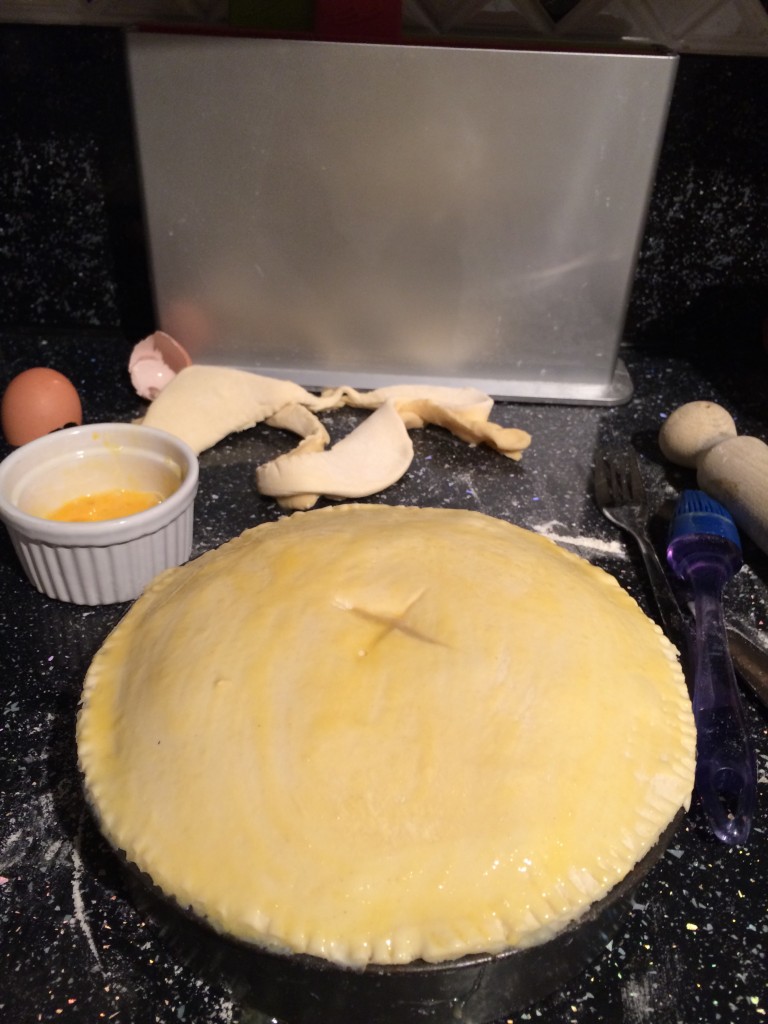 Now here’s where I made a mistake: my puff pastry shrank as it cooked and so my pie ended up looking a right mess, so I recommend you cover your pie filling but don’t trim the pastry too close to the edge of the pie dish, and seal the edges by pinching the pastry together. Brush the top of the pie with beaten egg, cut an air hole in the top and bake in a pre-heated oven – 170 degrees – for around 45 minutes until golden brown and the filling starts to bubble out of the air hole. 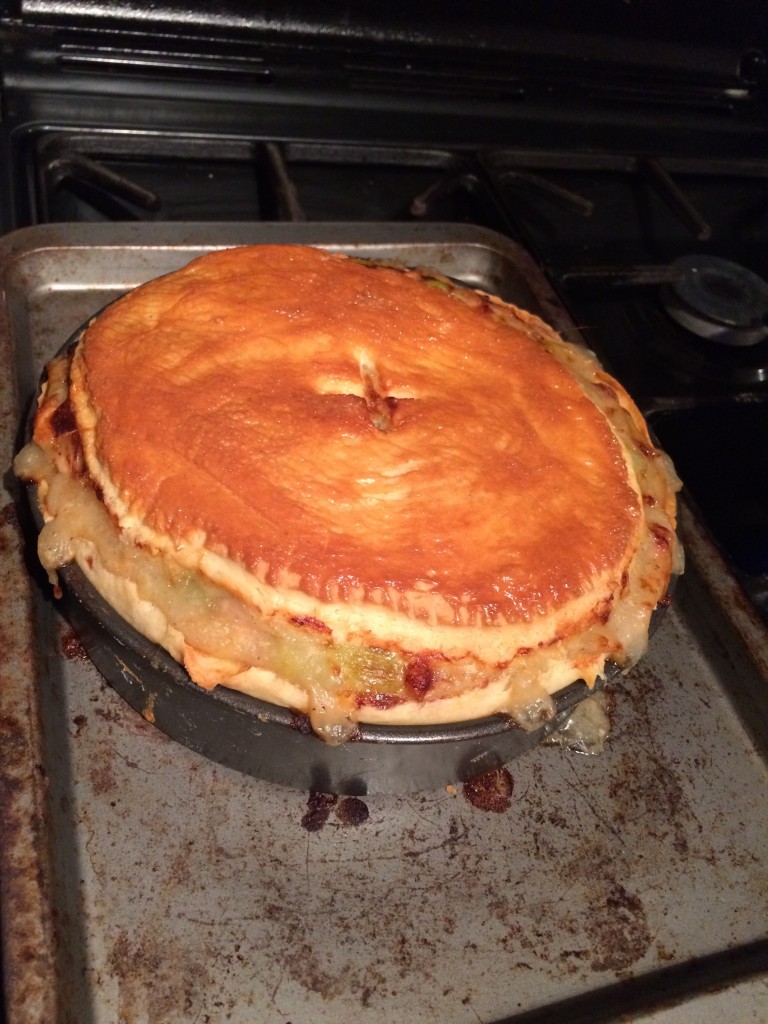 Take the pie out of the oven and allow to cool slightly before serving. My pie looked like a bit of a disaster but I promise you it tasted delicious, and the homemade puff pastry was crumbly, buttery and frankly pretty amazing – much better than shop bought.

As usual I am entering this pie into the The Great Blogger Bake off hosted by An Organised Mess, and The Pastry Challenge hosted by United Cakedom.