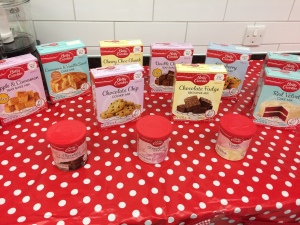 I was recently invited to  Betty Crocker bake and decorate event in London and was disappointed to discover that Betty was invented in the 1920s by American Mad Men. ‘Her’ first product was Bisquick (still available in shops now) and ‘she’ was introduced to the British market in the 1990s.

My brother Jason and I used to be addicted to Betty Crocker brownies (we’d purposely under-cook them so they were especially gooey, and then we’d eat them straight from the cardboard baking tray which came in the packet), and after my Mum was introduced to Bisquick by an American family, we often used the versatile ingredient to make American-style pancakes. 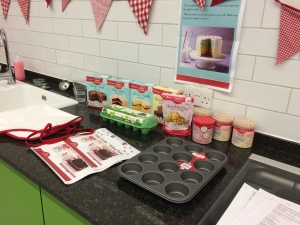 However, as I became more interested in cooking and baking, I moved away from the Betty Crocker packet mixes and cooked from scratch: after all, I always have flour, sugar, baking powder and eggs in my kitchen, so I don’t really need a packet mix.

After my recent christening cake making adventure however, I was keen to find out some tricks about decorating cakes for Christmas, and so I accepted the invitation to attend, despite my ambivalence towards Betty herself. 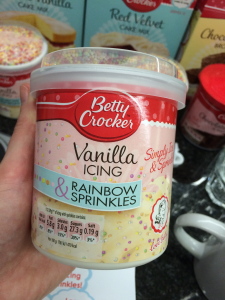 When I arrived, I was presented with the selection of Betty Crocker mixes – there’s quite a range of modern and classic baking mixes:brownies and chocolate chip cookies, as well as red velvet cake and cream cheese icing, cupcakes and devil’s food cake. The purpose of the event was actually to launch the new Betty Crocker vanilla icing with rainbow sprinkles. Basically it’s a tub of ready to use vanilla icing, which comes with a sachet of colourful hundreds and thousands to use to decorate your bake. As with all Betty Crocker products (which has been the case since she was launched in the 1920s) the idea is for everything to be as simple as possible for the home cook to make a treat in the kitchen.

We then got started on the baking: a marble cake made with a mixture of red velvet cake and vanilla cake (using some of those sprinkles in the cake mix), choc chip cookies which were then baked into a sheet of brownies, and of course cupcakes. 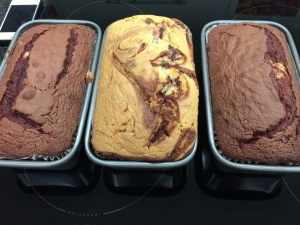 As you might expect, the mixes were very simple to use: most just requiring the addition of eggs, oil and water to the dry mix, a quick stir and then straight into the oven for baking. As I was surrounded by other bloggers I didn’t want to shame myself by licking the bowl each time we made a new cake, so I can’t say for sure whether the mixes pass the raw cake mix test of being as enjoyable to eat raw as cooked, but they certainly all baked well.

As we were pushed for time as the evening progressed, all the baked cakes had to be quickly cooled down in the fridge so that we could get on with the decorating. Here we used the Betty Crocker buttercream style icing, which I can confirm (after a sneaky bit of finger-licking) tastes very nice. 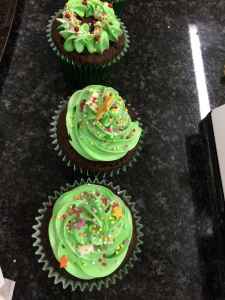 Green food dye and bauble decorations were used to adorn our cupcakes with Christmas trees (using the same technique as my Mr Whippy style cupcakes), and the loaf marble cake was decorated with strawberry and vanilla swirls and fondant icing snowflakes and holly.

I have used the same icing cutters when decorating my Christmas cakes, so I didn’t learn anything there, but I did appreciate the tip to ‘marble’ your icing by spreading streaks of jam up the (in)sides of the piping bag, and using freezer bag clips to stop your icing squelching back out of the top of the bag. With a bit of glittery icing these simple tips helped us to quickly produce a beautifully decorated cake.

The brownie / cookie layer (neither of which I thought tasted very nice) was supposed to be used to make a kind of gingerbread-style house, but we ran out of time. 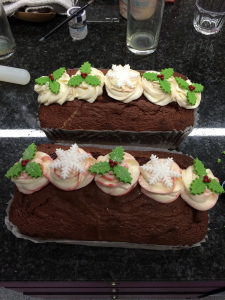 As well as being able to take home all of the goodies we made, I received a goodie bag with a cupcake mix, red velvet cake mix, cream cheese style icing and the new Betty Crocker vanilla icing with sprinkles. Because I was in bikini-diet mode as I was going to be heading off to Mexico the following week, I gave all of the cakes to Andrew to take to work, which his colleagues were delighted with.

But I still wanted to try out the Betty Crocker mixes to see if they did taste as good as a cake home-baked from scratch. The day after I returned from Mexico I was visited by my mum, as well as my friend Anne-So and her son Samuel, so decided to make the red velvet cake for them. 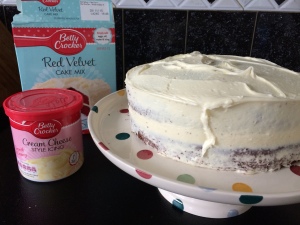 You can literally make the cake mix in seconds: you simply whisk the dry packet of ingredients together with eggs, oil and water. Then you pour the mixture into two sandwich tins and bake for around 25 minutes until a skewer comes out clean. Allow to cool, and sandwich shut with a tub of Betty Crocker’s cream cheese style icing.

The tub of icing was, according to the packet, supposed to be sufficient to sandwich the cake and ice the top and sides, but there wasn’t enough to give the cake a good enough coverage for my liking, as you can see from the picture. 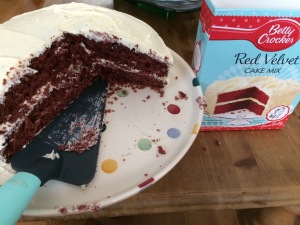 And what was the verdict on the taste? Well, the cake was surprisingly moist and had a lovely texture, but none of us felt it tasted of very much: as you can see from my photo, the cake didn’t have the dramatic dark red colour of a red velvet cake, nor did it have the taste of chocolate. The cream cheese style icing was also too sweet for our tastes. I much preferred the taste of their new vanilla icing, so I’d recommend using that.

It’s certainly convenient to have some Betty Crocker mixes and icings in the cupboard, and the cake you make could be of superior quality to one you’d buy ready-made from the supermarket. But if you are like me and never let your stocks run so low that you wouldn’t be able to whip up a Victoria sponge at a moment’s notice, then you probably won’t have too much need for Betty’s help. I will, however, be keeping a handy tub of vanilla icing in the cupboard for emergencies (if you can, with a straight face, call the need for icing an ’emergency’), as it will help you avoid the annoying (first world) problem of finding whip-able room temperature butter during a British winter. 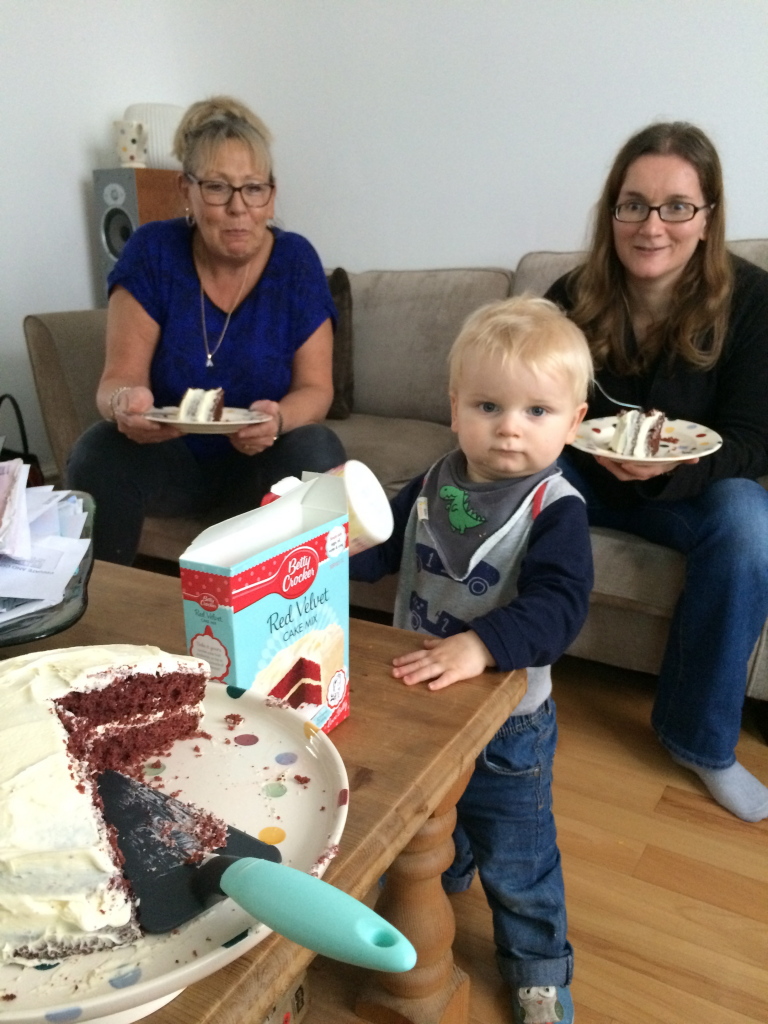