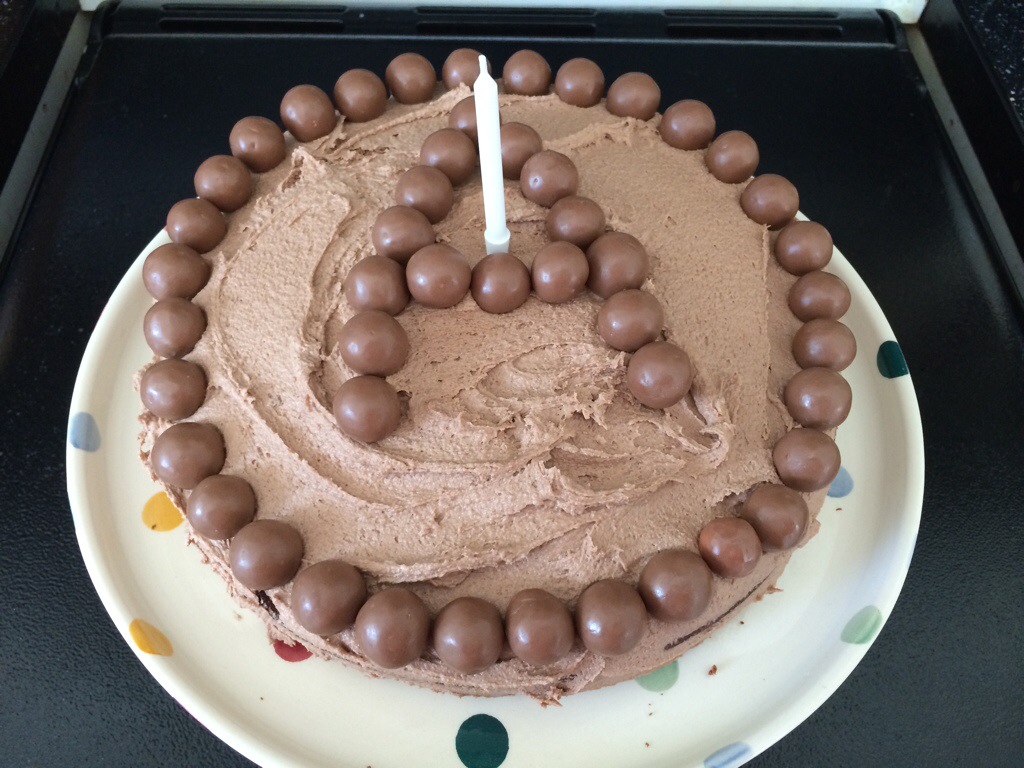 I may have mentioned before (once or twice) that I am quite a fan of chocolate. I really like Hotel Chocolat (and think that because it is quite expensive I won’t inhale it so quickly as ‘normal’ chocolate, although that doesn’t always work) but I also love the usual brands you can find in the supermarket. Green & Blacks sea salt milk chocolate is another high-end favourite, but sometimes nothing will hit the spot as well as a bag (or, er, a box) of maltesers.

As it was Andrew’s birthday at the weekend, I decided to make him a maltesers birthday cake. This is not as generous a gift as it may sound, as he doesn’t actually like chocolate very much. He is fond of maltesers though (but only one or two at a time – weirdo), and so with that thought in mind I was able to justify making him a maltesers birthday cake even though the only thing he would actually like off it would be the decorations.

Also, we had a few friends over for a barbecue as the weather in London suddenly turned decent, so I knew I’d have a willing audience to hoover up the cake (and stop me mindlessly cramming leftovers down my throat the next morning while suffering from the inevitable hangover). I did make some Mr Whippy cupcakes and a Gin and Tonic jelly (recipe to follow) to make sure there was plenty of sweet food though – I do hate the idea of people going home hungry! 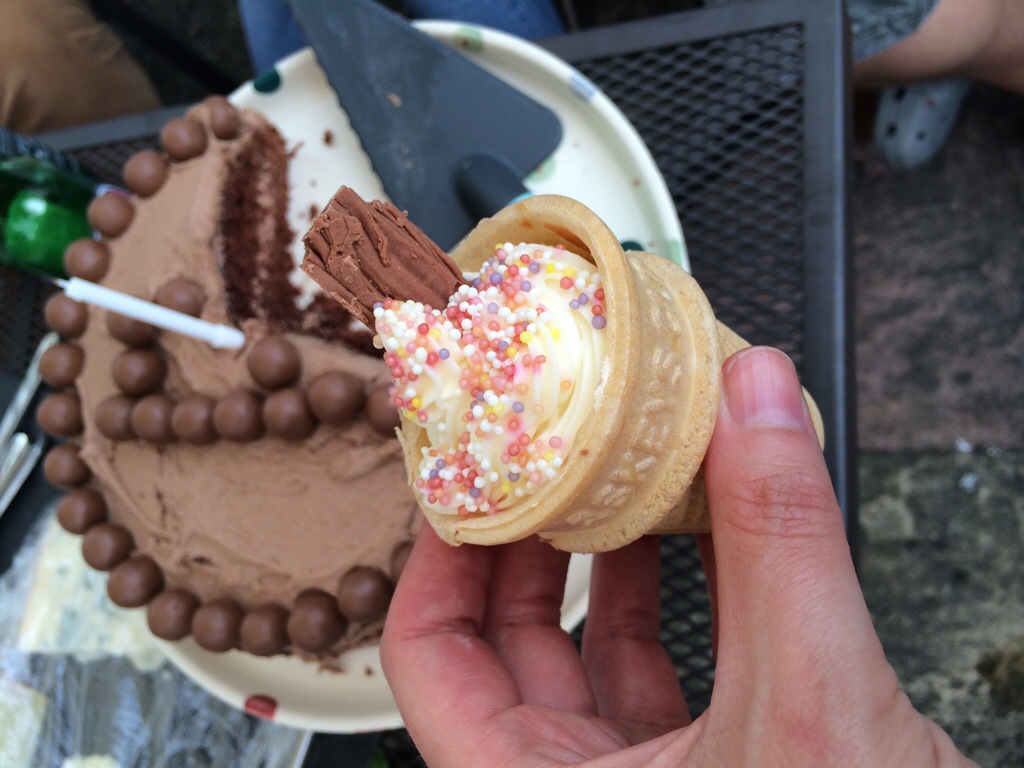 After googling various malteser cake recipes, I eventually decided go for a Nigella version, knowing that she never lets me down. The recipe appears in Feast and I actually thought there was a typo in it because the recipe calls for just 15g of butter in the cake. That doesn’t sound like Nigella, does it? However, the relatively low fat cake is more than balanced out by the buttercream icing which sandwiches and covers the sponge.

The sponge mix was very runny – like pancake batter – and so again I thought there was an error. I guess there wasn’t a mistake as the cake ended up baking very well, but I have to say that the texture of it really was not to my taste – it was quite a chewy sponge, and I couldn’t taste the Horlicks in the sponge or icing. My guests really enjoyed it though (Andrew didn’t even taste it!), so it wasn’t a write-off. However, I wouldn’t make it again. I have replicated the recipe from Feast below but also added an alternative version of my own, which I will be making next time (and sorry Nigella, but I think mine will be much nicer – I don’t want to test that theory yet though because I ate and drank so much at the weekend that I now resemble a baby elephant, so need to lay off the cake for a while!). 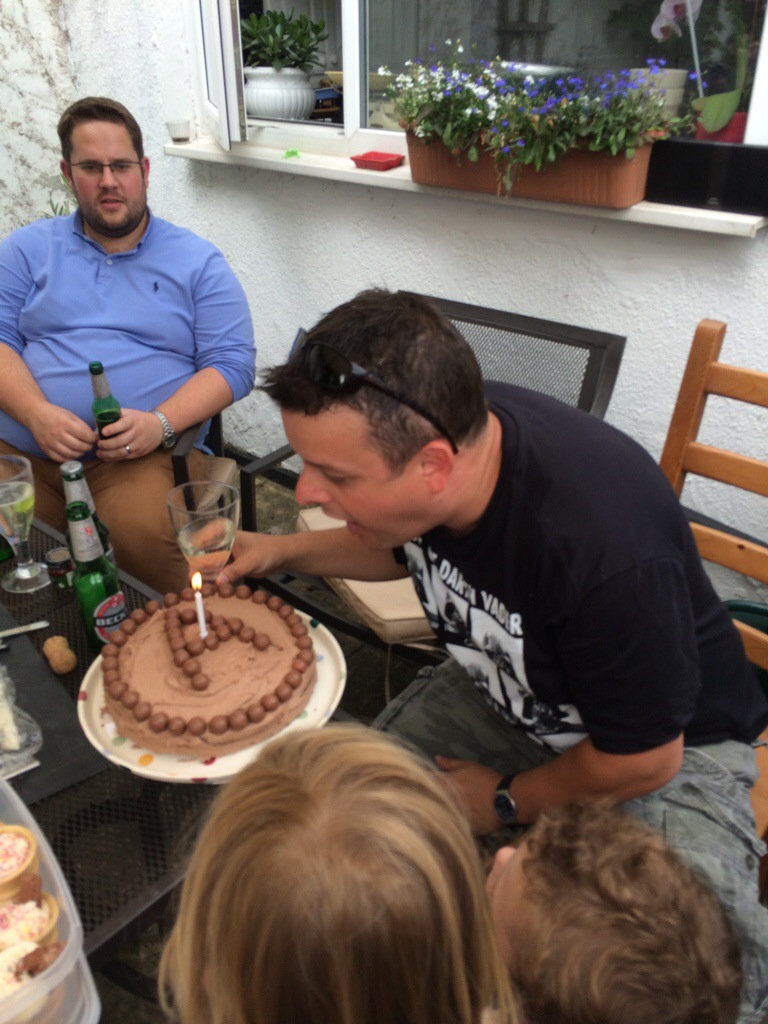 Nigella’s chocolate malteser cake (but don’t bother, make mine instead!)

Whisk the sugars and eggs together in a bowl (I used my freestanding mixer). In a saucepan melt the milk, butter and Horlicks together. Once the butter is melted and the Horlicks is combined, whisk it into the sugar and egg batter. Mix in the flour, cocoa, baking powder and bicarb. Pour into greased and lined sandwich tins (I used a single silicon dish and it didn’t stick). Bake at 170 degrees for 25 minutes, or around 40 minutes if you bake the cake in a single dish. Allow to cool.

For the icing, whisk the icing sugar, cocoa, Horlicks, and butter together until combined and then add the boiling water until the icing is smooth and fluffy. Sandwich the halves of cakes with half of the icing and use the rest to decorate the outside of the cake (Nigella just decorates the top but I coated the sides as well to hide the fact that the cake was decidedly lopsided!). Decorate the top with maltesers (loving my decorating skills – NOT!).

Mix all of the ingredients for the cake except the milk in a freestanding mixer until combined, light and fluffy. Add a splash of milk to loosen the mixture and then pour it into a prepared tin (or your trusty silicon dish) and bake it for around 40 minutes at 180 degrees or until a skewer comes out clean. Allow to cool.

My version would certainly be a richer cake than Nigella’s (hard to imagine) but I do prefer a damper sponge than hers. Am I right? Let me know in the comments which one you would prefer.