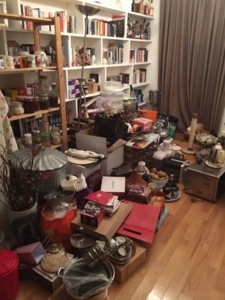 I knew that the last few days would be difficult. After a leak from the bathroom in February, we finally got our builder to replace our kitchen ceiling … and whilst he was at it, we decided to get him to take down the naff wallpaper, build some shelves and do a few other cosmetic jobs to the kitchen as well. Plus our hallway is being tiled, so we’re down to bare boards out there, and I keep expecting one of the cats to disappear down a hole in the floorboards.

Although we still have access to our oven and fridge, everything else has been removed from the kitchen and been replaced by dust and lumps of plaster. This happened on Wednesday and is due to continue until early (I hope) next week.

So on Tuesday night I made our last meal, using up the last of the roasted Easter lamb leg to make a pilaf for dinner that night, and lunches for the rest of the week (yes, yes, yes, I know you are never supposed to re-heat rice, but I always do and am yet to experience any ill-effects from it). Wednesday morning saw us leave the house in the hands of our builders, with all of my kitchen equipment (jeez, I really do have a LOT of stuff) in our living room. I was annoyed by the mess, and so we decided to visit a local restaurant for our first meal of the adventure that evening. 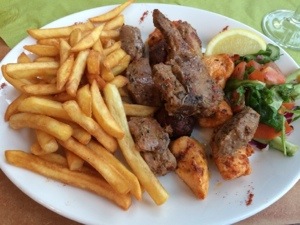 Mum’s lounge in Bounds Green is a family run Greek restaurant, and we had a relatively cheap but delicious (and massive) meal of various dips with pitta followed by mixed kebabs (lamb chop, pork, meatballs, chicken) and chips (I know). As this was our first meal out and all still a bit of a novelty we also had pudding – Andrew had ice cream and I had cheesecake, which arrived at the table resembling a chocolate sauce on a biscuit base. Either they thought that the cheesecake was supposed to be served warm or they had taken it out of the freezer and defrosted it to order – I’ve never had anything quite like it. It wasn’t actually too bad though, and so I ate it, we paid up, and then went back to our miserable dusty hovel. 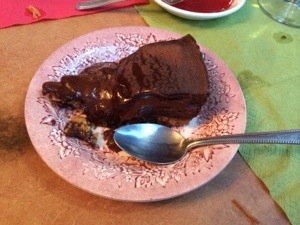 Everywhere by now was stinking of dust and the kitchen was in darkness as the lights had been removed, so we took ourselves off to bed for one of the worst night’s sleep ever: dust was up our noses, the cats were playing up because their litter trays and food was all in the wrong place (relocated from the kitchen) and our bellies were too full of meat to relax. We woke up feeling awful, and decided that night we’d get some picky bits from the supermarket to eat instead of a proper meal.

So off we went to work with cereal bars and lamb pilaf. I went out at lunchtime and bought some sausage rolls, salads, antipasti, bread and scotch eggs for our dinner. When we arrived home we had to dash straight out again so that we could buy our new car – very exciting! After a little drive around town (and the Homebase carpark for me as we also needed to buy an extractor fan and light switches – the glamour!), we went home and I dished up our living room ‘picnic’.

Well, it was alright, but I couldn’t help feeling it was all a bit unsatisfactory. Maybe it’s that we were eating on our laps instead of at a dining table, or that it wasn’t really a meal, or that it was cold, but neither of us really enjoyed it. Even worse, Andrew was working late the night after, so I had a night on my own with the leftovers for dinner. Let me tell you: sausage rolls, coleslaw and crisps is not a nice dinner, especially for the second night running. Even my Easter Egg pudding was rubbish, and I went to bed feeling pretty crap. 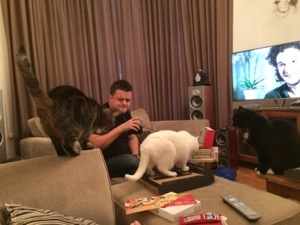 Today is Saturday and as Andrew is working again, I escaped the house and builders with a trip to the dentist and hygienist (now that’s a desperate way to avoid home) and then onto the hairdresser for a new hairstyle, which I am very pleased with (it’s very short!). I had a tuna and cheese panini for lunch at a cafe in Arsenal, and then got home and ate more chocolate while waiting for Andrew to return. One chocolate turned into the whole box – I was just in one of those moods. He has decided he wants pizza for dinner tonight which means another unhealthy dinner. I can feel my rolls of fat growing around my middle, and can see the double chin emerging from below the first one. But it’s my own fault.

I am so over it now, so spent some time this afternoon inventing meals which can be oven cooked or microwaved (although the microwave will have to be used in the living room, which I am not really keen on), and have ordered lots of microwaveable veg from Ocado.

So I have to organise meals around Andrew’s Sunday at work, but I am hoping that I can pull together a reasonable approximation of a Sunday lunch tomorrow (pie and veg). Then for the rest of the week I am going to microwave stews from the freezer, bake or roast potatoes, and steam vegetables. I am also going to go to the gym every day and hide my Easter egg, otherwise by this time next week I’ll be a stone heavier, covered in spots, and incredibly depressed. Or I could just buy bloody salads to eat every day instead of pizza and chips I suppose, but then what would I have to moan about?

Anyway, before I drown in self-pity, the lamb pilaf I made was really rather fabulous, and here is now I made it. It’s probably nothing like a lamb pilaf actually, but I read a recipe for pilaf which inspired me, so that’s what I am calling it. I served it with courgettes (for me, and fried mushrooms for Andrew). 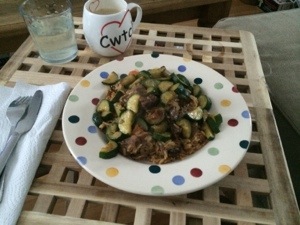 Leftover cooked lamb (including any leftover dripping or meat juices from the roast), rice (you should use basmati but I didn’t have any so used jasmine rice instead), 2 diced carrots, 2 diced onions, a beef oxo cube, a splash of vegetable oil

Use double the quantity of water or stock to rice to make the pilaf – I used 1 large cup of rice and 2 large cups of water and an oxo cube – that made enough for 5 large portions.

Fry the carrot and onion in the oil until softened. Add the rice and coat it in the oil as if you were making a risotto. Add the water and stock cube and bring to the boil, then simmer with the lid on for 10 minutes until the liquid has all but disappeared. Add the torn apart lamb and leave the rice to continue to steam with the lid on the saucepan for another 5-10 minutes until the rice is tender and the lamb is warmed through. The leftover gravy or meat juices adds a great flavour to the dish – if you don’t have any then you might find it’s a little bland, so in that case could add some garlic and other veg (spinach leaves would be nice stirred in, or peas and sweetcorn). Season to taste, and serve in a bowl while you sit in front of the telly, surrounded by food mixers, packets of flour and ice cream makers, moaning about your expanding waistline.