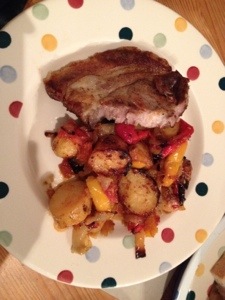 My kitchen is still a dusty disaster zone, so I don’t have any new recipes to share with you. However, one of my favourite dishes, which happens to be one of the simplest, is a traybake. It scarcely counts as a recipe as you just have to chop up a few things, dump them in a baking tray, add some olive oil, salt, pepper and maybe a few dried herbs, and then bung it in the oven for thirty minutes to an hour. Voila – hardly any dishes, and a delicious meal.

So, the fundamental basics of this recipe are: meat, potato, vegetable. The choice of each is up to you, depending on how you feel.

For the meat component, I would recommend a type of meat which can survive a decent blast in the oven. I favour pork chops, or chicken thighs, or sausages. A bit of fat helps, so get a thick cut chop which has the rind still on it (crackling – yum!), or chicken with the skin still on it.

For the potato part, I prefer waxy new potatoes as they hold their shape during the bake. I have used old potatoes but they can start to break apart – sometimes that’s quite nice, but generally I’d recommend sticking with a new potato. I always leave the skin on the potato, and don’t bother washing them after I chop them up.

For the vegetable part, I always include onion, garlic and mixed peppers. I often include whole cherry tomatoes or chopped normal tomatoes as well, as they add a bit of liquid to the dish which is great to mop up with crusty bread. As you have a potential hour in the oven, choose a veg which is relatively robust – parsnips, butternut squash, sweet potato, mushrooms, courgettes, aubergines and carrots would also be good.

As well as a dousing of olive oil and a liberal sprinkling of sea salt and black pepper, I also like to add a pinch of dried chilli flakes and some dried oregano or thyme to the tray before I bake the dish. You could add any herbs you fancy really – rosemary would also work well. You could also add some cumin or paprika to the tray for a different, punchy flavour.

So you put everything in a baking tray – all the veg and potatoes need to be cut into bite-sized pieces – and bake for a minimum of 30 minutes, but assume it will need to have 45 minutes to an hour in the oven. You want the potatoes to be tender when you stick a knife in them and the meat to be cooked through. I like to turn the potatoes and veg a couple of times after you’ve reached 30 minutes as otherwise the veg might start to catch.

The beauty of this dish (apart from the delicious flavour and minimal washing up) is that it can take a bit of over-cooking. The juice from the meat dribbles onto the veg and gives it a lovely flavour, and the steam from the veg seems to keep the meat juicy. I am sure that eventually it would all burn and turn dry and horrible, but I’ve yet to have that happen to me. Without fail it has always been gorgeous, and is one of our favourite dinners.

If you have your own version of a traybake, let me know in the comments section below – I’d love to hear about your recipe.

3 Replies to “The easiest dinner – traybake”