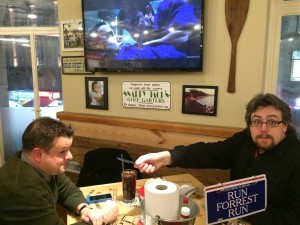 Bubba Gumps, for those of you who don’t know, is a chain of Forrest Gump themed restaurants. I first came across one at the airport in Cancun, although they are all over the States too, and my brother noticed that one had opened in Piccadilly Circus which he loved the idea of going to, so I suggested that we all go and try it out.

Although I am a self-confessed food snob, I do love a bit of fast food now and then, and I thought that maybe Bubba Gumps could fall under the category of naughty but nice food. A few clues should have given me a hint that Bubba Gumps might not be the culinary journey of joy my brother was anticipating: firstly that the restaurant is in the Trocadero (a kind of hellish place filled with tourists where no Londoner should ever go), and secondly that the menu is absolutely massive (can any restaurant do a hundred different things well?). I foolishly didn’t check out any online reviews, but they would have given me a further indication that I wouldn’t be having the time of my life.

So we arrived at Bubba Gumps, made our way through the shop on the ground floor (selling all sorts of Forrest Gump memorabilia, which was actually quite fun – Jason spent a small fortune on the t-shirts on the way back out), and made our way upstairs to the huge – and I mean HUGE – restaurant.

Decorated with Forrest Gump signs, posters and photos, the film is also blasted out from various TV screens around the restaurant (a tad distracting for Andrew, who had never actually seen the film before). The extensive menu is almost entirely comprised of seafood – mainly shrimp, which is what Forrest and Lieutenant Dan catch in the film, and brightly coloured cocktails for which you pay around £9 a pop, but do get to keep the glass (the glasses are quite nice actually, but I didn’t think it was worth the money even though you do get a glass). 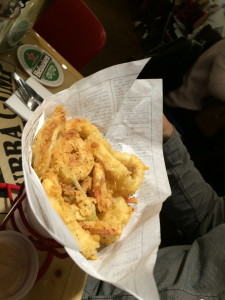 Rarely have Andrew and I been to a restaurant where nothing on the  menu was particularly appealing, but we eventually chose seafood hushpups for me – I didn’t know what they were but they seemed interesting – Andrew chose calamari and Jason chose popcorn shrimp.

Hushpups were rather like small fishcakes made of white fish, veg (maybe sweetcorn) and additional flavours I could not identify, and mine were served in a large paper cone which turned out to be almost entirely filled with chips, and then a few bite sized hushpups on top … not something I generally expect for a starter. The calamari was rubbery and tasteless, although Jason quite liked the popcorn shrimp. 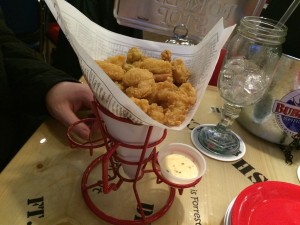 For our main courses we chose: 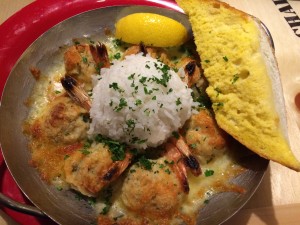 Well for my main course I’ll let the picture do the talking – I am sure you’ll agree that the shade of yellow on my (I think) garlic bread is not one you would expect to be on any dining plate. The overriding taste of the dish was garlic – I couldn’t taste any shellfish at all. I ate approximately a quarter of it, not touching the strangely florescent yellow bread.

Jason cleared his plate, although that’s not to say he enjoyed it (he likes party packs of food from Iceland so is perhaps not the best person to judge), but Andrew quickly sickened of the beige fried lumps he was eating. He said the food “wasn’t disgusting”, but everything on his plate – chips included – tasted the same, as if it had all been cooked or heated in the same oil. 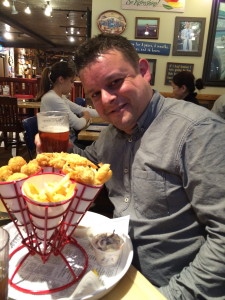 We declined pudding (there genuinely was nothing that took our fancy, but also we were stuffed with fried beige stuff) and settled up (over £100, not well spent) and Andrew and I spent the next few hours wishing we’d eaten somewhere else as our bodies slowly digested our beige meal. Jason on the other hand managed to fit in a stopover at McDonalds on his way home. Greedy takes on new levels when it comes to my brother.

It’s safe to say we won’t be revisiting Bubba Gumps, nor will we recommend it to anyone. When the best you can say about a restaurant’s food is that it’s “not disgusting”, it’s hardly worth a repeat visit. I will say that the service was friendly, although not particularly fast, and the shop downstairs sells some amusing film memorabilia. The restaurant was spotlessly clean as well. If you are a fan of Forrest Gump and like themed restaurants where the food is edible but nothing special, then you might enjoy it more than me. The place was packed, so they are doing something right –  but Bubba Gumps is definitely not for us.

Have you ever been to Bubba Gumps, and if so what did you think? 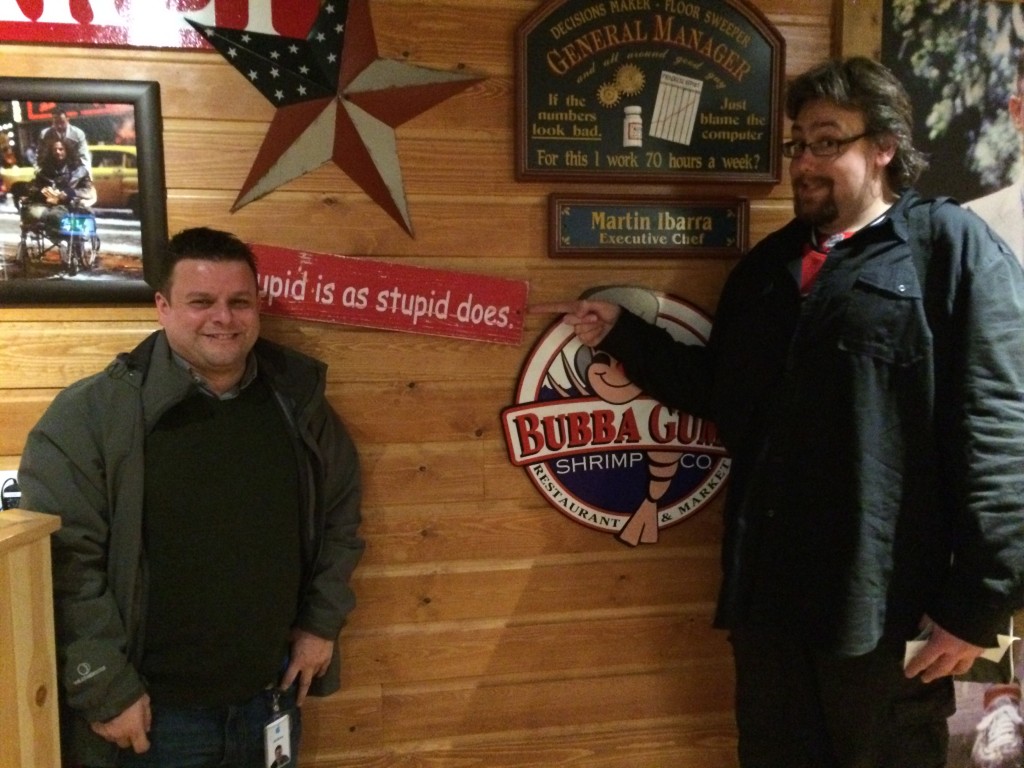