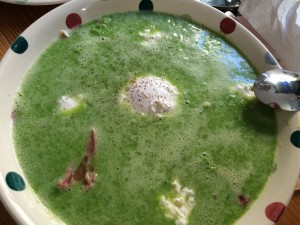 This week is basically going to be a week of going out, so there’s not going to be much cooking happening. But the going out is going to be very exciting. We’ve got Fleetwood Mac at the O2 (The Chain is one of my all-time favourite songs), then I am going to a food blogging event on Thursday, and on Friday we’re off to a cinematic double bill of Alien and Blade Runner. Then on Saturday we’re going to the Royal Albert Hall to see The Beach Boys. See, not much time left for cooking there. But what I will try to do is as follows: 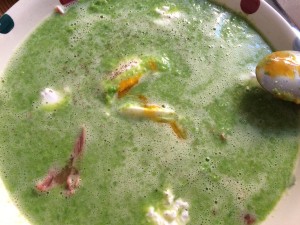 Last week’s food experimentation with the ham stock ended up going very well. I decided to make a pea soup with the stock – so simply reheated the cooking liquor with a teaspoon of lazy garlic and some frozen peas, then blitzed it up until smooth. I shredded a little bit of ham into a bowl, added the soup on top and some pieces of fresh young goats cheese. I also added a poached egg, which was tasty but unnecessary, and I had wanted to dress the bowl with some pea shoots but Waitrose was sold out.

The soup was delicious and substantial (although Andrew bulked his out with several slices of baguette!) and the boiled ham lasted us all week for packed lunch salads. I was going to buy another one for lunches this week, but decided to roast a chicken instead – a large one will not only make a delicious roast dinner for us, but yield plenty of meat to top our salads this week. 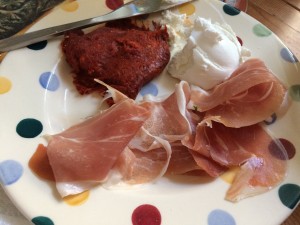 We also tried Nduja for the first time last week. I’d actually got some free in my last Ocado shop (by the way, follow the Ocado blog for regular special offers – that week I’d received a voucher for approx £17 of Italian goodies in my trolley, this week I got around the same value of vegetarian food … don’t tell Andrew though), but had to do some research to find out about it, as whilst I had heard of nduja I’d never seen or tasted it.

From Calabria in Italy, nduja is essentially it’s bits of pig (don’t delve too deeply, I think heads and tripe might be involved) and roasted hot red peppers. Characterised as ‘fiery’ we found it to be surprisingly mild (and this is coming from me, the chilli baby). You can stir the pate-like nduja into pasta sauces, but we spread ours onto pieces of baguette with some of the lovely goats cheese I added to the soup and it was beautiful. It would be perfect as an aperitif on a summer’s day with some crusty bread and chilled rose wine, but was very good as a starter to our pea soup.

We had to take poor Henry to the vet again on Thursday to check whether his new meds were working . Despite the nightmare it is getting 8mls of potassium supplement into him (I actually find the pills easier as he’s like a baby, trying to spit out the liquid) it’s working and his potassium levels are the highest they have ever been since he first got ill nearly two years ago. So we’re keeping with the new dose and fingers crossed won’t have to go back to the vet until July for his jabs. 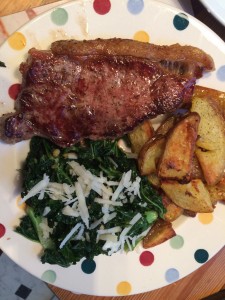 As Thursday was our three year anniversary of moving into this, our first home (aka ‘the money pit’) I wanted to make us a nice meal. With Henry’s trip to the vet after work I decided steak would be a good choice, so parboiled some potatoes which I had cut into wedges before going to the vet and then when we got back coated them in rapeseed oil and stuck them in a hot oven. I cooked a bit of kale with garlic and pine nuts as I thought we needed something green on the plate, and then cooked the sirloin steaks medium rare. Perfection with a blob of bearnaise sauce (I use Maille sauces as they are excellent, and when you make homemade bearnaise or hollandaise you are made brutally aware of how much butter goes into the sauce!).

What are your plans for the week ahead? And if you have any suggestions for how to cook with nduja please do let me know in the comments below. Here’s a recipe sent to me by Jane at The Hedgecombers food blog to share with you – sounds delicious!

2 Replies to “Week 21 – Fleetwood Mac, Aliens and The Beach Boys”