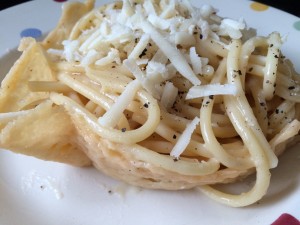 Cheese and pepper – two of Andrew’s favourite things. We discovered this simple classic Roman dish when we were on holiday there in July. I had ordered pasta carbonara from the waiter at Roma Sparita restaurant, who refused to serve me it, insisting that instead both Andrew and I try their classic Cacio e Pepe, which we had never heard of.

This was more than a little irritating, as I like to order different food from Andrew so that I can try his as well, but the waiter was having none of it, and as my command of Italian doesn’t extend beyond “Uno Aperol spritz per fevore” I had no choice but to cave in.

I tried to hide my annoyance by googling the little restaurant we had entered on a whim, after wandering around the trendy Trastevere area of Rome, and it was then I realised the place was famous … because Anthony Bourdain had visited there when filming No Reservations and declared it to be the best Cacio e Pepe in town. Suddenly I liked the waiter and his Italian bossiness. 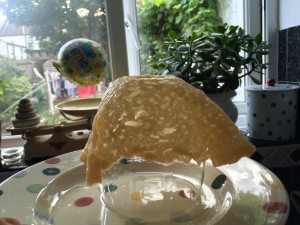 As we munched on our starters of parma ham, buffalo mozarella and arancini, I was distracted by an unusual dish which kept being carried past me. In the dusk, I thought this was some kind of ice cream dessert, in a wafer bowl. I decided to ask my waiter friend what it was, but before I could, my very own was plonked in front of me. It turned out to be the famous Cacio e Pepe.

Not only do Roma Sparita serve the pasta itself with lashings of parmesan cheese (and, less authentically, butter), but they serve it in a bowl MADE OF PARMESAN CHEESE. Yes, that’s right, a dish guaranteed to raise your cholesterol there and then, but in a delightfully tasty way.

It was one of the best pasta dishes I have ever tasted. It was clear from the texture of the pasta that it was homemade (I know: I make my own, and you can tell the difference). The sauce was creamy and spicy with the crushed black pepper, and the parmesan basket added an extra salty bite and crunchy texture. I saved the best  bit for the end … the bottom of the basket which had gone soggy and chewy from the pasta sauce – delicious.

Of course, Andrew outright demanded that I recreate this dish at home, and after much googling of ‘parmesan baskets’, ‘cacio e pepe’ and watching the YouTube video of No Reservations to see how Roma Sparita do it themselves, I came up with what tasted to us just like the real deal.

One confession: I didn’t make my own pasta in this instance but that’s because I had bought a pack of Bucatini pasta home from Rome, and wanted to try that (it’s like thick spaghetti with a hole running through the middle, and it’s brilliant stuff – if you can get some, use it).

Try it yourself – I guarantee you won’t be disappointed (unless you don’t like cheese and pepper!).

I made my parmesan baskets first. Grate approximately 150g of parmesan while you heat a non-stick frying pan. When the frying pan is moderately hot, sprinkle half the parmesan onto it in a thin layer to make a rough circle shape – it should be the size of a side plate. 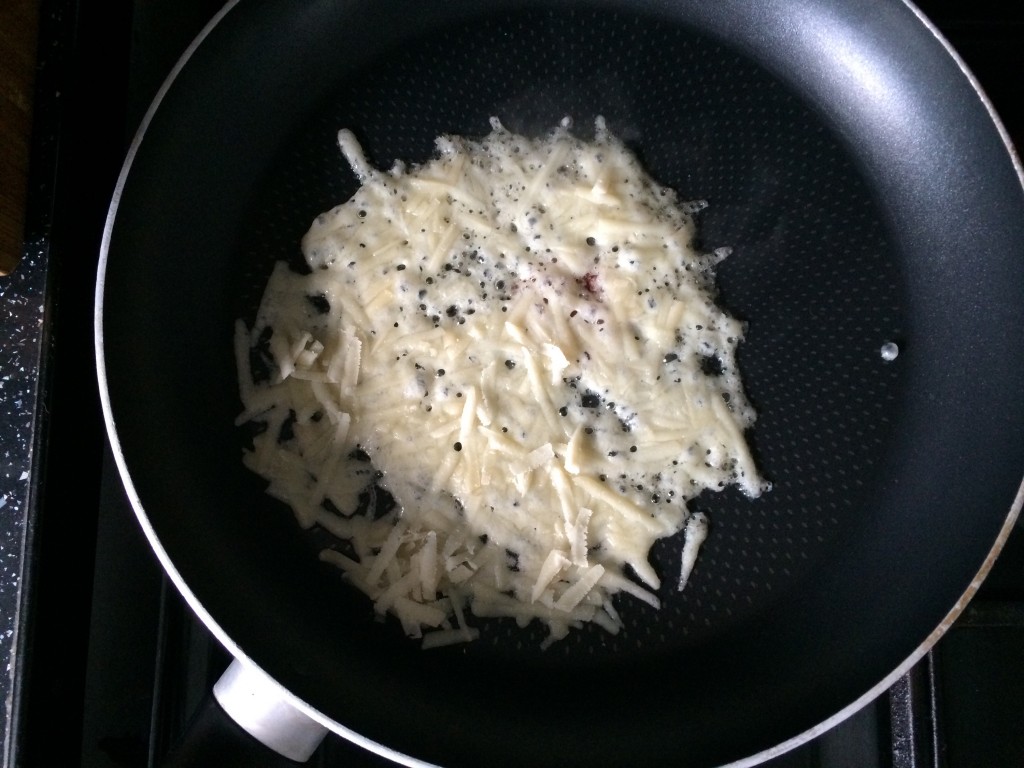 Allow the cheese to melt, and then turn golden and crisp. Take the pan off the heat and allow the parmesan crisp to cool slightly (just for 30-40 seconds), until it has set enough to allow you to get a spatula underneath and lift the cheese from the pan. 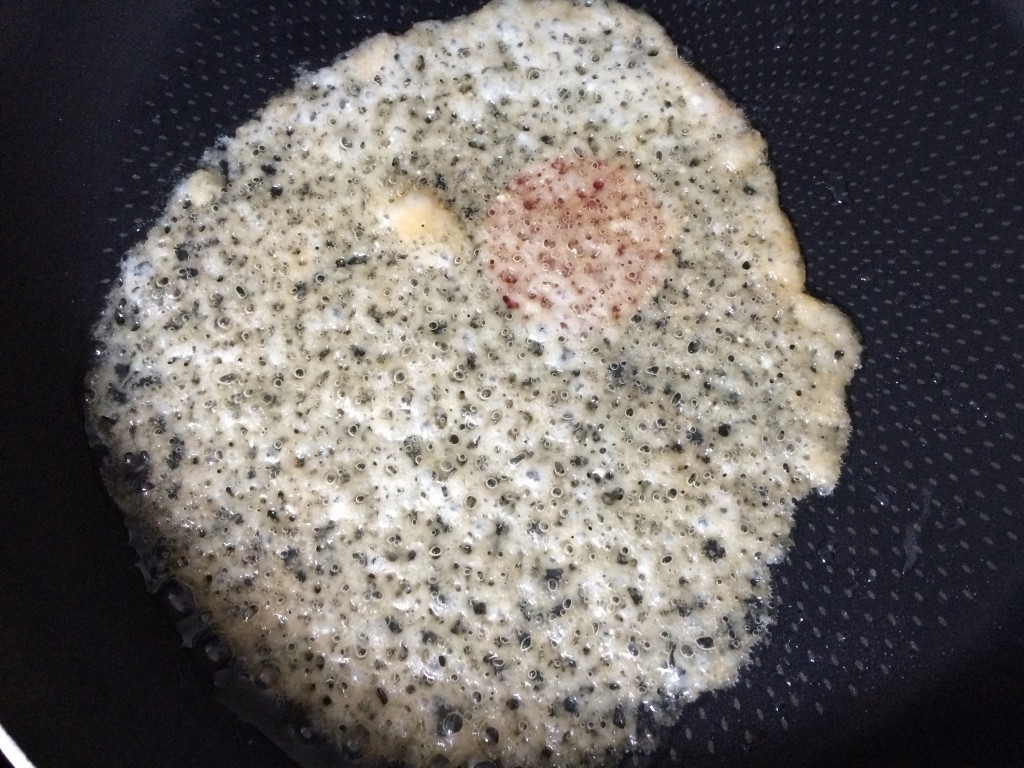 Gently lay it over an inverted cup or glass, and allow it to cool completely – it will harden into a parmesan bowl. 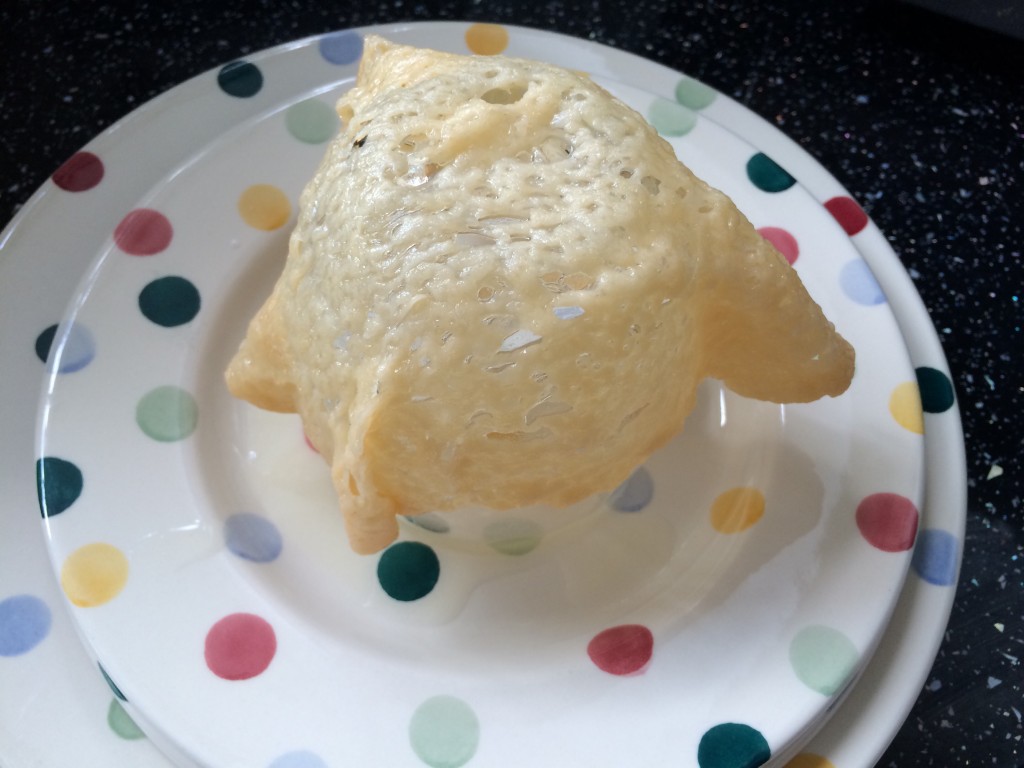 Repeat the process with the rest of the parmesan to make a second bowl, and let them both cool.

Now you can move onto the pasta, the main event. Cook your pasta according to the instructions on the packet (I always cook my pasta in heavily salted water – I am sure Nigella said once that pasta water should be as salty as the Med – I don’t think I am that bad but I am liberal with the salt). While the pasta is cooking, grate the rest of the parmesan cheese.

When your pasta is almost ready to drain (1-2 minutes before you would normally serve it), drain it but retain the cooking liquid. 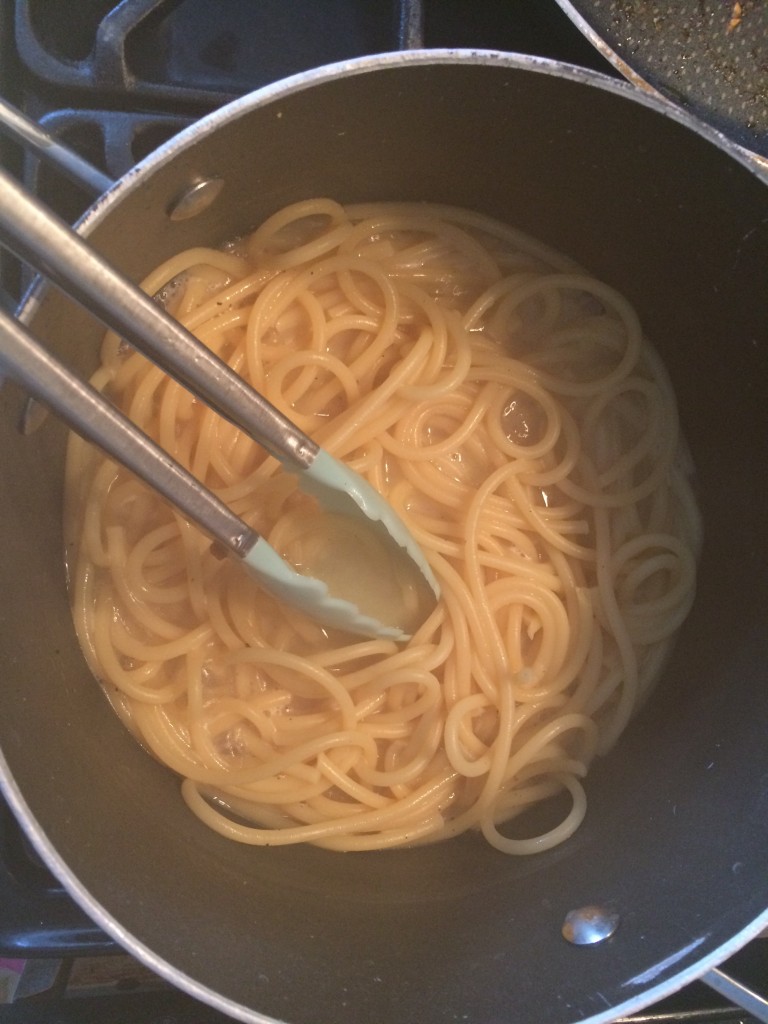 Put the pasta back into the pan and pour around 200ml of the cooking water back in with the pasta and stir in almost all of the cheese (retain a little to sprinkle on top) and a lot of black pepper (a teaspoon full if you are using cracked black pepper, or a good twenty twists if you are using a pepper mill). Keep stirring until the water is absorbed and you have a creamy, cheesy sauce coating the pasta, and then stiry in a big knob of butter and more pepper (approximately half what you used before). 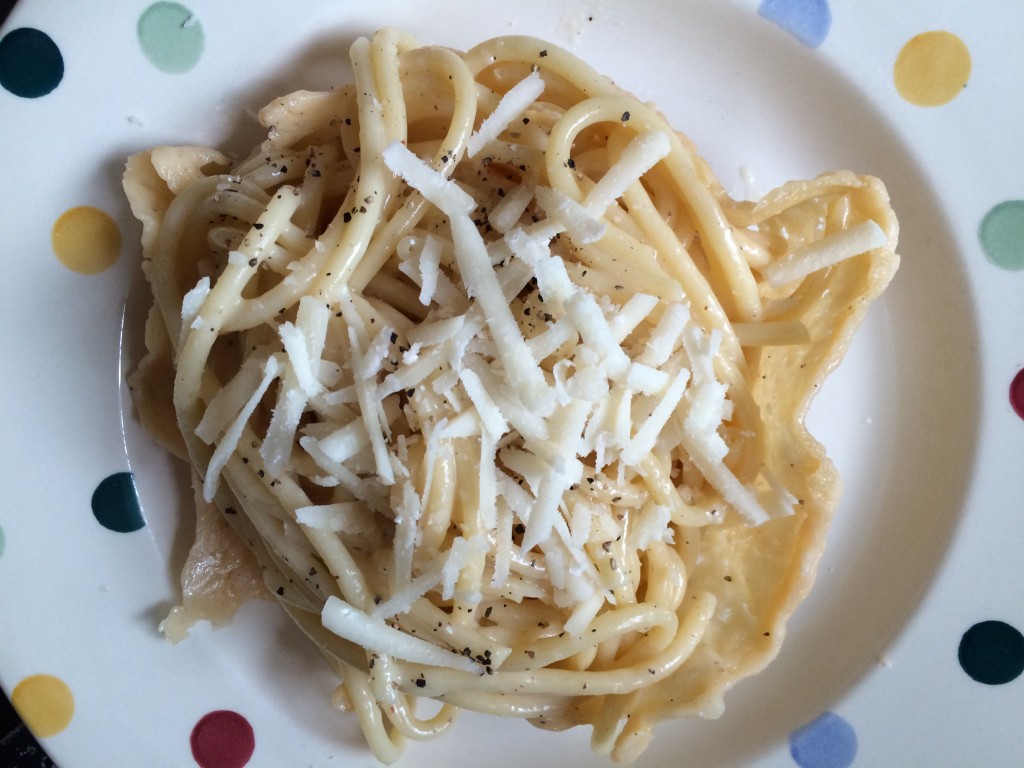 Check for seasoning (you may need just a touch of salt) and serve the pasta in your parmesan bowl. Top with grated parmesan and a final twist of black pepper, and you’re ready to go. 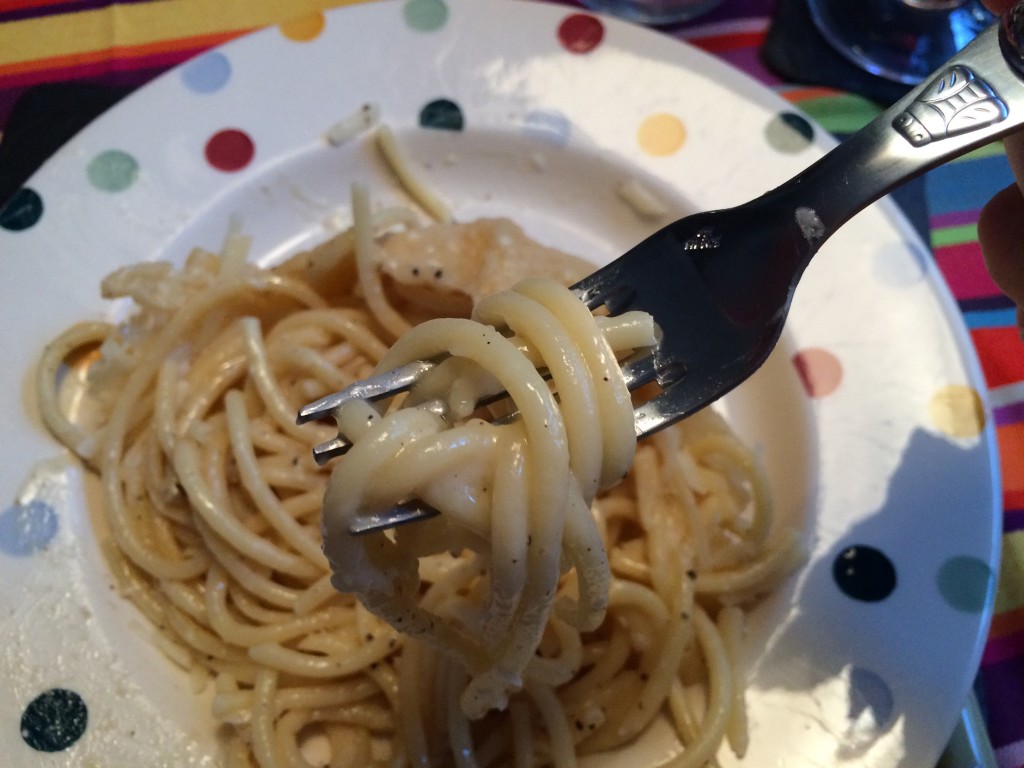