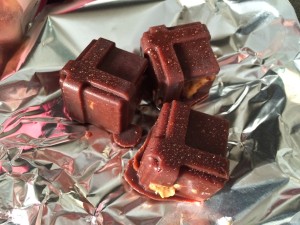 I love a lot of things about Foodie Penpals. Obviously I love getting food by post (I mean, who wouldn’t?). I also love picking out goodies to send to a stranger, based on their answers to a few simple questions (for example “what won’t you eat?”). I have discovered bloggers who I have continued to follow ever since, which has been great, and I have even managed to convince friends to participate.

I most enjoy getting the  opportunity to try food or ingredients which are specialities to a certain country or region, so I am always especially delighted to be paired up with an overseas penpal. It can be a bit embarrassing sometimes as my knowledge of geography is terrible, so I often don’t know exactly where a country is, or confuse it with another country (like this time). 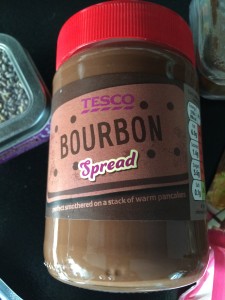 So I was really pleased to be paired with Rita from Vilnius in Lithuania this month, even though I didn’t know exactly where on the map one might find Lithuania. Andrew asked me to guess (my thickness is a source of constant amusement to him), and I told him that I thought it might be near Poland or Hungary. Somewhere East anyway.

Not bad eh? It’s near Poland at least. However, when he asked me to point it out on a map it turns out that I didn’t know where Poland was, as I was pointing in the general direction of Georgia. So there you go – a proven geography dummy.

Anyway, I asked Rita to send me across some local delights, and she didn’t disappoint. She sent me: 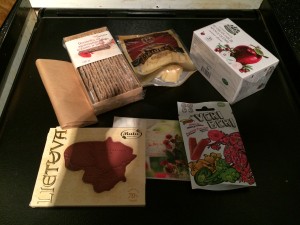 How fabulous is that? The cheese and crackers are for breakfast tomorrow, but I couldn’t resist using the oregano on my homemade pizza, which was our House of Cards season 3 premier treat, and it was delicious. The smell as I opened the package was delicious, and completely different from the powdery herbs you buy dried from the supermarket. I have decided that I have to try and do the same myself as it’s such a lovely idea to include home dried herbs in a foodie penpal parcel.

The penpal I was paired with to send a parcel to was Michelle in Glasgow, who described herself as ‘an eater’ which is brilliant. She, like me, likes to receive regional parcels of goodies she might not be able to get in Scotland, but is allergic to eggs and intolerant of caffeine so couldn’t have either of those items in the parcel (cake is okay, but not mayonnaise).

I put together the following parcel for Michelle – fingers crossed she likes it. Unfortunately despite posting it two weeks ago, Michelle hasn’t been in touch to say it has arrived. I am hoping she’s just enjoying the treats too much to let me know, rather than it has gone astray, but I will update this post when she contacts me.

If you’d like to take part in foodie penpals in 2015, take a look over at This is Rock Salt for more information.