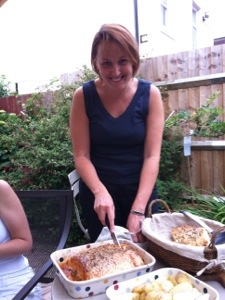 I love having friends for dinner. Some people hate the idea of spending the day cooking, but I really enjoy pottering in the kitchen, making (hopefully) tasty things for people to eat. I also like planning the menu in advance – poring over my cookery books, choosing different starters, main courses and puddings which will go together well and suit the season, temperature, and of course our friends’ tastes.

Eve and Paul came over for dinner yesterday, and as it is completely scorching in London at the moment I wanted to choose a menu which would not sit too heavily in the stomach, but still be tasty. Also, I am still dieting, and I didn’t want to blow all my hard work with an unhealthy meal (as tasty as that can be!). Paul can’t eat beans and peas etc, so I had to avoid anything like that as well, but neither of them are fussy eaters so that made life a bit easier.

So fish seemed to be the best option all-round, and lucky for us, we live a few minutes walk from the best fishmonger I have ever come across – Green Lanes Fisheries, which is on Green Lanes between Wood Green and Palmers Green.

We knew from past experience that they sell out early, so we got up at the crack of dawn (ahem, 9am) and headed straight over there. We bought what I needed – juicy large king scallops and 2 kilos of salmon; then couldn’t resist a bag of raw, peeled tiger prawns for the freezer; a dressed crab for Sunday lunch; and some hot-smoked salmon fillets for one night this week (possibly more addictive than crack cocaine). It’s not cheap there compared to the supermarket, but there is no comparison in terms of quality. Additionally they will prepare your fish as you wish – skinning, gutting, filleting and washing your gilled goodies for you, which is great when, like me, you can’t be bothered with dealing with fishy gunk. Life’s too short.

The scallops were for my starter. I had googled various recipes, and eventually decided on a hybrid of a few: pan-frying the scallops and serving them on a bed of spinach wilted with lardons, garlic and pine nuts. No sauce required as the spinach creates it’s own juice with the bacon as it wilts down, and the oil and butter caramelises with the scallops to make a beautiful, sweet, buttery juice. Had I been thinking less like I had drunk several glasses of wine, I would have squeezed a lemon into the pan after removing the scallops to sharpen the sauce, and even added some chopped parsley. Those two clever ideas have only just occurred to me – they would have made a great starter even greater.

My main course was a Rick Stein salmon dish, which I have made many times before (usually for our Christmas eve dinner). I originally saw the dish on one of his cookery shows at least 6 years ago, and recreated it without ever referring to his actual recipe. The only thing I did check, was for how to make salsa verde. When I looked online for Rick Stein’s real recipe yesterday, I discovered his salsa verde is quite different from the one I had been making, so feel free to use your own preferred combination of herbs, anchovies and capers. My recipe below does not faithfully adhere to Rick’s, but I have also added a link to his version for people who want to follow it strictly. I served mine with simple boiled jersey royals and home-made bread (Nigella’s soft white dinner rolls), which again strays from Rick’s recipe.

Pudding was where I did want to indulge (and isn’t that the place where you are supposed to?). My original idea was to make ice cream, but because I am lazy and my ice cream maker is a pain in the arse to use (it’s a bowl which you have to freeze for 24 hours and then you can churn the ice cream in that, using a paddle), I decided to make no-churn ice cream. I have made it before with Nigella’s no-churn pomegranate ice cream, which turned out brilliantly, but I just wanted plain vanilla this time around.

So what to have with homemade ice cream? Well, berries are great for this time of year so they ticked the box. But what else? Well, let me tell you, waffles are pretty fabulous (you do need a waffle iron for them, but that costs around £30 from John Lewis, and is a worthy investment in my view), and then you have a brilliant excuse to make chocolate sauce to go on top and utterly destroy your diet (especially if you pour the sauce directly into your mouth like I might have done when people had taken what they wanted). So that’s what I did. And everything can be prepared in advance except the actual waffle cooking itself (although I do have some leftovers so will let you know sometime if they survive being re-heated), so you can spend time chatting, laughing and boozing with your friends.

So this is what I did. 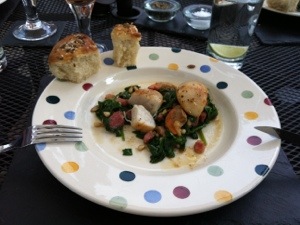 8 king scallops, one bag of spinach, 200g pack of smoked bacon lardons (or use pancetta), a sprinkling of pine nuts, a teaspoon of lazy garlic, a drizzle of olive oil, a knob of butter, salt and pepper

Fry the lardons in olive oil and garlic until crispy. Turn the heat down, add the pine nuts until they are lightly browned, and add the whole bag of spinach and allow to wilt. Season with pepper (the bacon is salty enough for my liking). Once the spinach has wilted, keep it on a low heat while you cook the scallops.

Mine came with the roe attached – I removed it, plus the little muscle, and cleaned them thoroughly. Season the scallops with salt and pepper and fry in a hot pan which has been drizzled with olive oil. They only take 60-90 seconds each side to cook (depending on size and thickness). For the last 30 seconds, add a knob of butter to the pan and watch the juices caramelise. The roe take slightly longer to cook than the scallops so leave them in the pan to continue to cook when you plate up the dish. After removing the scallops from the pan you could add a squeeze of lemon and a handful of chopped parsley – maybe next time for me!

To serve, the spinach and bacon sits in the middle of the plate and then you simply place the scallops (and roe if you like them – I don’t) on top of the spinach. Add any juices from the pan and serve immediately. The homemade bread is great to mop up the sweet, fishy juices. 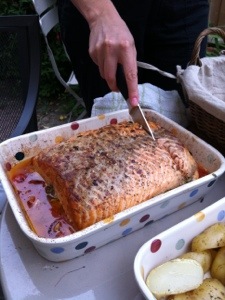 2 1kg salmon fillets, 4-6 large ripe tomatoes, a large handful each of parsley and mint, a couple of tablespoons of capers, a tin of anchovy fillets in oil, 2 teaspoons of lazy garlic, dried chilli flakes, dried thyme, the juice of 2 lemons, olive oil, salt and pepper

Plus I have seen salsa verde recipes which also include cornichons and basil, so feel free to make according to your own preference.

Slice the tomatoes and line the bottom of a baking tray with them. Sprinkle with a few capers, chilli flakes, dried thyme and a couple of blobs of garlic (around a teaspoon’s worth, or a clove, thinly sliced). Drizzle with a little olive oil, juice from one lemon and a few splashes of water. Lay one salmon fillet skin-side down on top of the tomatoes (I removed the skin from my fillet but you don’t have to). Top the salmon with your salsa verde mixture which is made from blending the anchovies, parsley, mint, capers, tsp of garlic and lemon juice from 1 lemon to a rough paste, and seasoning to taste (I only added pepper as I found mine was very salty due to the capers and anchovies – I consequently didn’t use any salt in the dish and the flavours were very nicely balanced in the end). Top that salsa verde-covered salmon with the other salmon fillet, skin-side up (so the thick end from the top one goes on top of the thin end of the bottom one like a yin and yan fitting together). Top that with chilli flakes, dried thyme, pepper and a drizzle of olive oil. This can now stay in the fridge until half an hour before you are ready to bake it, when you should leave it to come to room temperature before baking.

I baked mine in the oven at 190 degrees for around 40 minutes, which left it just pink in the centre. That’s how I like it, but cook for longer if you or your guests prefer (it’s only the very centre which is pink though, so there should be something for everyone). To test whether the fish is cooked through, take a knife and push it into the centre of the fish. Leave it there for 10 seconds and then take it out and hold the knife tip to your bottom lip. If it’s hot, the fish is cooked. If not, leave it in the oven for 5 minutes and test again. 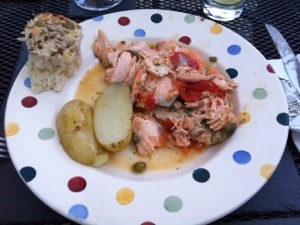 Take the fish out of the oven and allow it to rest for 5 minutes before serving slices (it’s not easy to make a pretty slice as the fish flakes apart, but it’s still delicious so don’t worry too much about presentation) with boiled new potatoes. The tomatoes become soft and render down into a delicious sauce to serve with the salmon, and dip your homemade bread into.

Tastes EVEN NICER the next day, so make enough for leftovers. 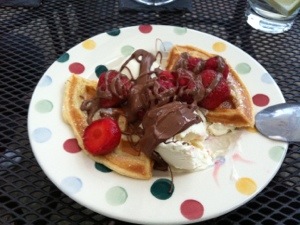 Place the flour, sugar, salt, butter and egg yolks in a bowl, and gradually add the milk, beating together until you have a smooth batter. Set aside for at least 15 minutes (I left mine for 6 hours until I was ready to make the waffles, and it seemed fine) at room temperature. Just before you are ready to serve the waffles, turn on your waffle iron and take the ice cream out of the freezer. Whisk the egg whites with a pinch of sugar until stiff, and fold into the batter mixture. Pour the mixture into the waffle iron (lightly brush with butter for the first waffle – it shouldn’t be needed for the rest of them) and cook for 3-4 minutes (my waffle iron beeps when they are ready). This mixture made five round waffles for me which I quartered, and served 2 quarters as a portion, dusted with icing sugar, with a scoop of ice cream and berries. I also microwaved some milk chocolate for a minute until melted and put that on the table in a jug for people to pour for themselves. If you haven’t had chocolate for a while, it’s hard not to guzzle the melted chocolate when everyone else has taken their share.

FOR THE ICE CREAM:

Make the ice cream 24 hours before you need it by whisking one can of condensed milk (397ml) with a 600ml container of double cream and some vanilla bean paste until it is thick like clotted cream. Freeze in tupperware. It freezes hard so remove from the freezer 10 minutes before you plan to serve it.

8 Replies to “A fishy feast”