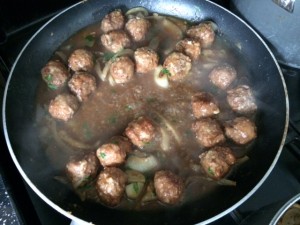 A few weeks ago Scan meatballs sent me some Swedish meatballs and recipe ideas. The recipes were for summery, light recipes to celebrate Swedish midsummer, but when I told Andrew about them he demanded that I try to recreate his favourite IKEA meatballs. I bribe him to take me to IKEA by saying that we’ll have a plate of meatballs and chips as a reward for getting half way around the shop without killing eachother and / or everyone else because it’s such a dreadful but sometimes necessary experience.

There’s something about IKEA meatball sauce which is not entirely pleasant in my mind, but still edible. I  have a feeling that perhaps it’s cooked with mushrooms, and you know how much I hate them. So I didn’t want to recreate the taste exactly, but still end up with a delicious gravy. 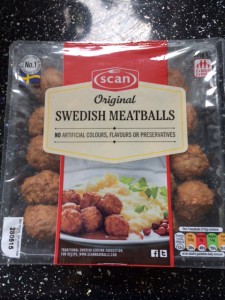 What I did was surprisingly simple and effective. I fried some onions with the meatballs in a frying pan (you don’t need oil as the meatballs do release some as they cook) and as soon as the onions browned I added some flour to soak into the meat juices. Then I gradually added beef stock to the pan, mixing it to combine with the flour and produce a rich brown gravy. And that was literally it. And it made one of the nicest meals I have eaten; a meal which Andrew has subsequently requested 3 times in as many weeks.

However, I debated about the best time to post the recipe on It’s not easy being greedy as I wanted to link it to Swedish midsummer, but it’s the least summery recipe I know (gravy does not equal summer). But then I reminded myself that this summer weather is pretty grim at the moment (seriously, this is June?!) and so I decided to post it anyway. So here you go, Swedish meatballs to celebrate Midsummer (summer, pah). Have a tot of schnapps as well and forget about this bloody weather. 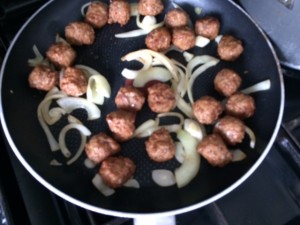 Heat a deep-sided frying pan (enough to hold the gravy) and gently warm through the  meatballs (they are already cooked) until they start to release some fat. If you feel it’s necessary you can add a drop of vegetable oil to the pan, although I didn’t, and then add the sliced onion and fry gently until softened and lightly coloured. Sprinkle the flour onto the meatballs and onions so they are lightly coated, then add the stock to the pan a little at a time. Stir the stock into the floury meatballs so the flour becomes a paste, then add more until you end up with a thick gravy. Add as much stock as you need to achieve the consistency you like in your gravy (we like ours quite thick) and then continue to heat the meatballs, onions and gravy for a few minutes (to cook out the flour).

Add salt and pepper according to taste (and maybe some chopped parsley if you have some) and serve with peas and a jacket potato or new potatoes.

By the way, you can also make this with homemade meatballs (I reckon a mixture of pork and beef mince would be most authentic), but the Scan ones are rather delicious, and extremely filling. I received a couple of family sized packs which are enough for two adults and two kids according to the box. I don’t remember how many meatballs were in there but we had loads leftover. I’d say that 7 meatballs per person is a very decent portion (and I think there are 14 meatballs in the two-person pack that we subsequently bought from Ocado to satisfy Andrew’s desire for more), and remember I am greedy.

And for any vegetarians amongst you, check out Amuse Your Bouche for Swedish bean balls with lingonberry gravy. Or for a lighter option, Maison Cupcake has this scandi-ish mackerel salad recipe which looks rather delicious. 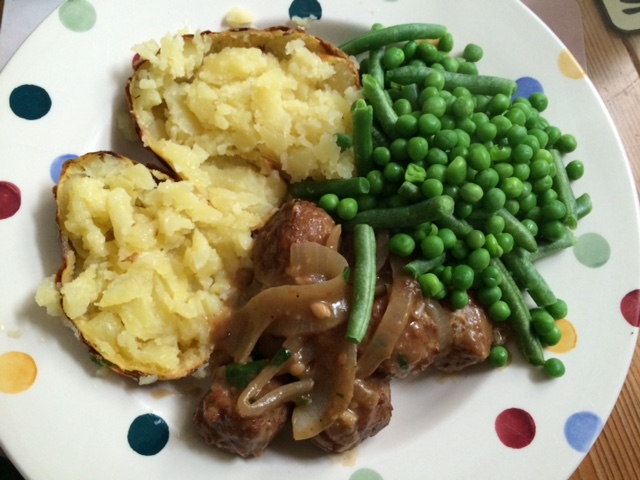