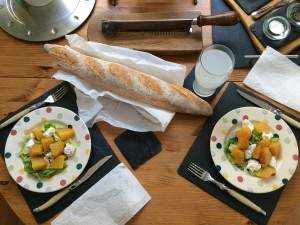 I am writing this just after watching the first episode of a new cookery programme by Nigel Slater. As always I am struck by how genuinely nice he seems, and how much I’d like to go around to his house for dinner. In fact, years ago we used to live near to him in Highbury and every time I visited our fabulous butcher Frank Godfrey (from where we still order our Christmas goose) I used to hope to bump into him. Sadly I only ever bumped into David Starkey.

Anyway, several weeks ago Andrew picked out Nigel’s The Kitchen Diaries for my cookbook challenge, but I have only just got around to putting finger to laptop to write this post (can you say that instead of ‘putting pen to paper’?).

I had forgotten how much I enjoy Nigel’s books. As I read them I can hear his voice speaking the words in my head (it’s the same with Nigella), and although I generally enjoy all of his recipes, my complaint about Nigel would be that his portion sizes don’t seem as generous as my greedy tummy (and boyfriend’s tummy) would like. He admirably avoids carby side dishes with his main meals, so always be prepared to make some spuds or rice to go on the side of his dishes to be sure you are well fed.

So for this cookbook challenge I chose a couple of dishes to make from ‘May’ as we were in May at the time of cooking. I picked beetroots with goats cheese to start, followed by pork with lemons and potatoes (okay, I picked the dish with carbs) and then I decided to make a  marscapone tart from June as I’d made it before and thought it delicious. 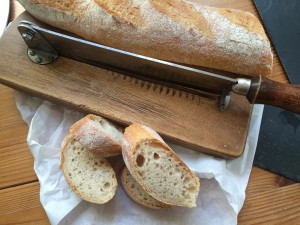 We had planned to go to Alexandra Palace antiques fair on the Sunday, and whilst we were there popped to the farmer’s market as well. The antiques fair was great and we picked up a few lovely things, including a French bread slicer from the late 1800s (apparently, although I am no expert so to be honest it could be from early 2000s Ikea), which I have had great fun slicing my baguettes with ever since.

I am less fond of the farmer’s market, which always seems to have very overpriced items for loaded North Londoners to waste their cash on. Perhaps I am being unfair – I know the supermarkets treats farmers badly and pay them next to nothing for their produce so they can keep down prices – but I always do feel a little bit ripped off after a trip to a farmer’s market. However, one of the stalls was selling golden beetroot, so I handed over goodness knows how much cash for a few beetroot and then headed back home feeling considerably poorer.

Nigel assured me that the beetroot would take about an hour to bake in the oven, but clearly he had never encountered an Ally Pally beetroot before. They seem to be made of sterner stuff than their Islington cousins and took a good three hours in the oven before they were even vaguely tender. In fact, they were still a bit hard but I was starving hungry and desperate to use my baguette guillotine by then so out they came from the oven anyway. 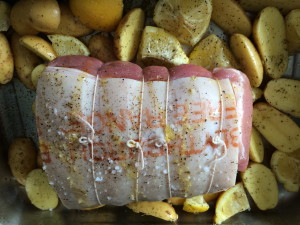 Sliced beetroot dressed with a little vinegar, topped with goats cheese and scooped up with bread: I have to hand it to Nigel, it was possibly one of the nicest combinations I have ever eaten, and I’ll be doing so again … this time I’ll buy smaller beetroot though to try and reduce the cookery time. I used this cheese from Ocado which I highly recommend with this dish.

We didn’t eat too much bread as our main course was the pork, potatoes and lemons. I have to be honest that I was a bit dubious about the lemons as I cooked chicken with whole lemons once and found the flavour of the citrus too overpowering and bitter. But I put my faith in Nigel and I wasn’t disappointed. However, it wasn’t my favourite way to have roast pork and potatoes, and I won’t necessarily be having again. 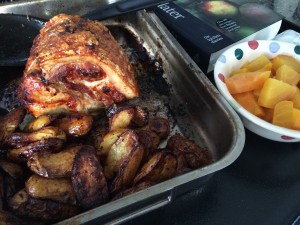 The pork did yield enough leftovers for me to make pork char siu buns the following day from Gok Wan’s Chinese cookbook, but I am not sure there would have been enough for “four people plus leftovers” as suggested by Nigel.

Finally the strawberry marscapone tart. I’d made a version of this before for Andrew’s grandmother, omitting the raw egg for double cream to lighten the marscapone, and this is how I actually discovered my Mr Whippy cupcake topping: the cream cheese mixture tasted to me just like a vanilla Mr Whippy!

I stuck to the correct recipe this time and was again struck by the simplicity of Nigel’s recipes and how delicious such simple ingredients can taste. I just made one amendment by substituting the strawberries for rhubarb as we had loads in the garden to use up. I usually use Waitrose own-brand cream cheese for these type of recipes but real marscapone is smoother and creamier, so go for it if you can and try not to pay attention to the calories. 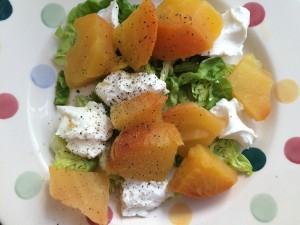 Roast the beetroot in their skins, wrapping them in foil so that none of the dye leeches onto your baking pans. Depending on size they will take between 1-3 hours to soften if baked at 180 degrees. When the beetroot are tender enough for you to pierce them easily with a knife, they are done. Remove from the foil and allow to cool, then the skin should quite easily peel off.

Slice the warm beetroot or cut into chunks and dress with the vinegar and salt. Arrange on some salad leaves on a plate and top with chunks of goats cheese. Serve immediately with crusty bread. 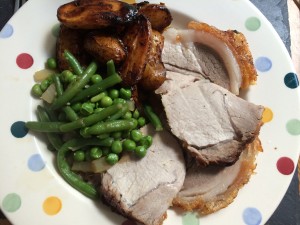 Slice your new potatoes lengthways and put into a baking tray with wedges of lemon, the fennel seeds and olive oil. Mix and season well, then top with your pork joint, season generously with sea salt, and roast at 220 degrees for 20 minutes. Turn down the oven to 200 degrees and continue to roast the pork for 20 minutes per 500g or until the juices run clear.

I found the potatoes started to catch during this time, so be prepared to check the oven every 15-20 minutes to give them a stir. Serve with thick slices of pork and crackling. 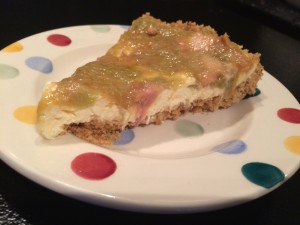 Cut the rhubarb into 1inch pieces and put into a small baking dish, then pour over the orange juice. Cover with foil and bake in an oven at 180 degrees for 20-30 minutes until the rhubarb is tender. Once cool, taste the rhubarb and add sugar or honey to taste if necessary, although during the summer you probably won’t need to add anything as the rhubarb will be sweet enough.

Put the butter in a saucepan to melt while you crush the digestive biscuits into a rubble. Mix the two together and press into a pie dish or loaf tin to make a base like a cheesecake. Put in the fridge to set while you make your filling.

Mix together the marscapone cheese with the sugar, vanilla and egg yolk. In a separate bowl whisk the white of the egg to a stiff peak and then fold the egg white into the cheese mixture. Spoon over the biscuit base and then top with the fruit.

Read more about my cookbook challenge. And see below for my guillotine in action. 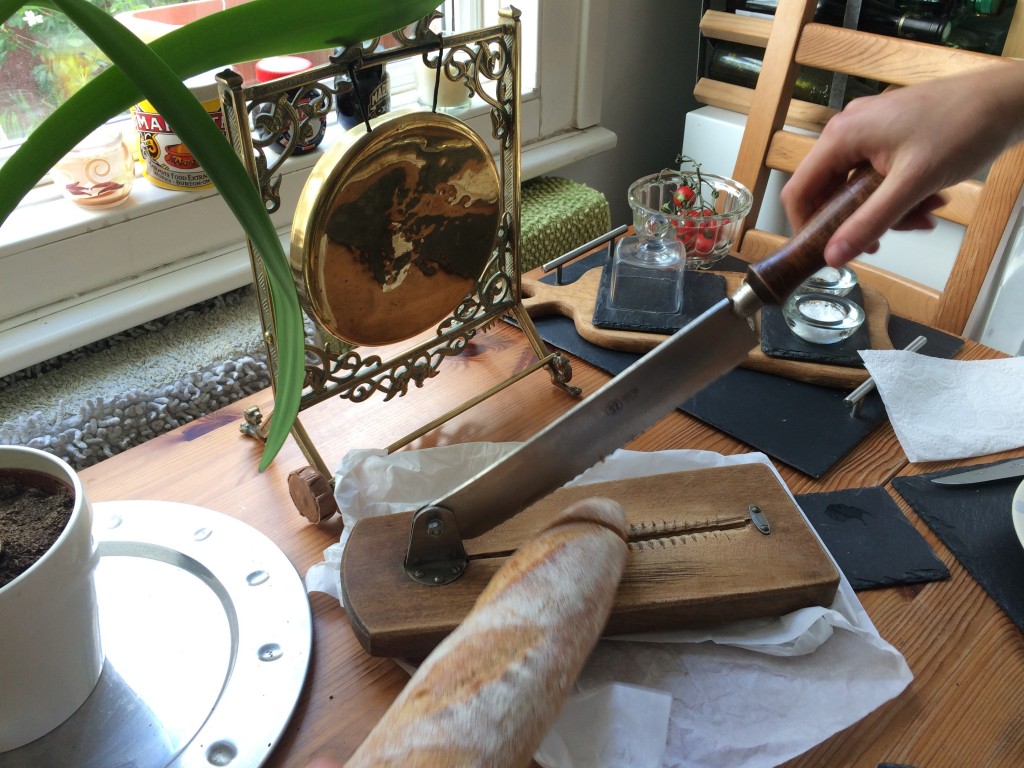