When we were in Canada on holiday during the summer, we were based with some good friends of ours: Steph, Junior, and their little baby Levon. We tried to be the best house guests possible, and have apparently been ranked number one by Steph and her family! They were certainly amazing hosts, and Junior treated us to some delicious home-cooked food, including some spectacular ribs, and a delicious taco salad bowl. 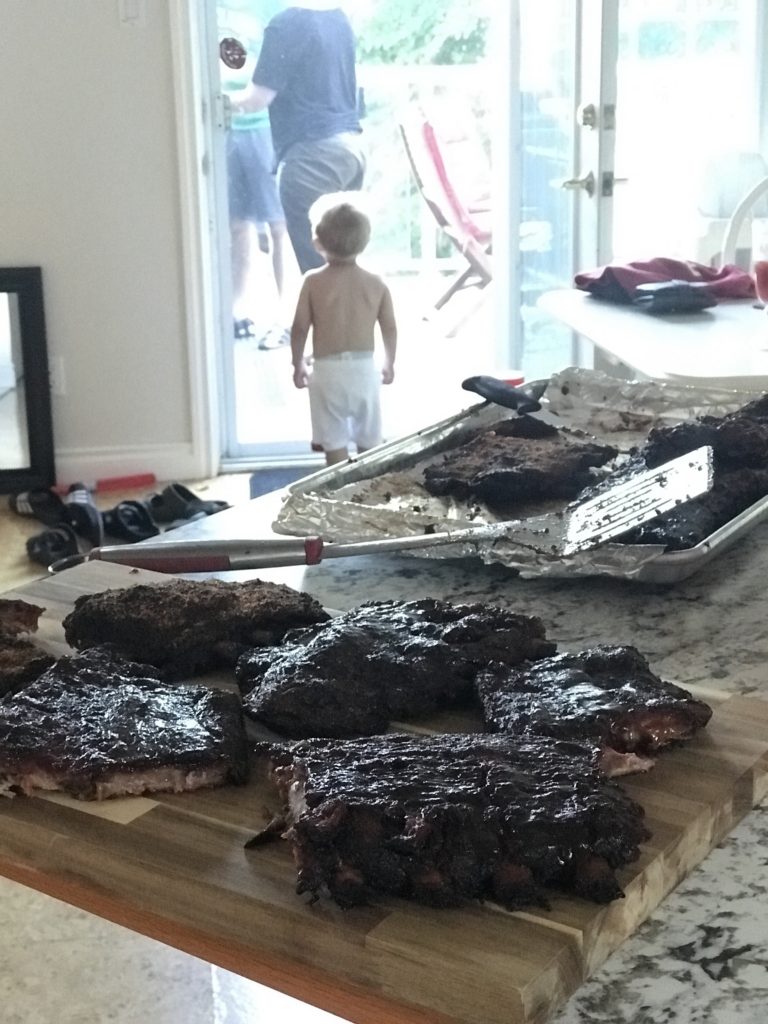 As I was eating the taco salad bowl, I knew I’d have to eat it again, so would recreate it at home, so Junior gave me a few tips so I’d be able to make his version.

Taco salad bowl - a deliciously Mexican inspired dish with a tortilla wrap made into a bowl, full of seasoned mince, cheese, guacamole and salad - a perfect quick and easy meal Click To Tweet

Minced pork and beans make up the main protein in this dish, and of course you could make it veggie by using a variety of beans, or quorn mince, to replace the pork. Or use beef if you are not a fan of pork. By replacing the cheese garnish with a vegan cheese (or removing completely) you’d have a vegan dish. 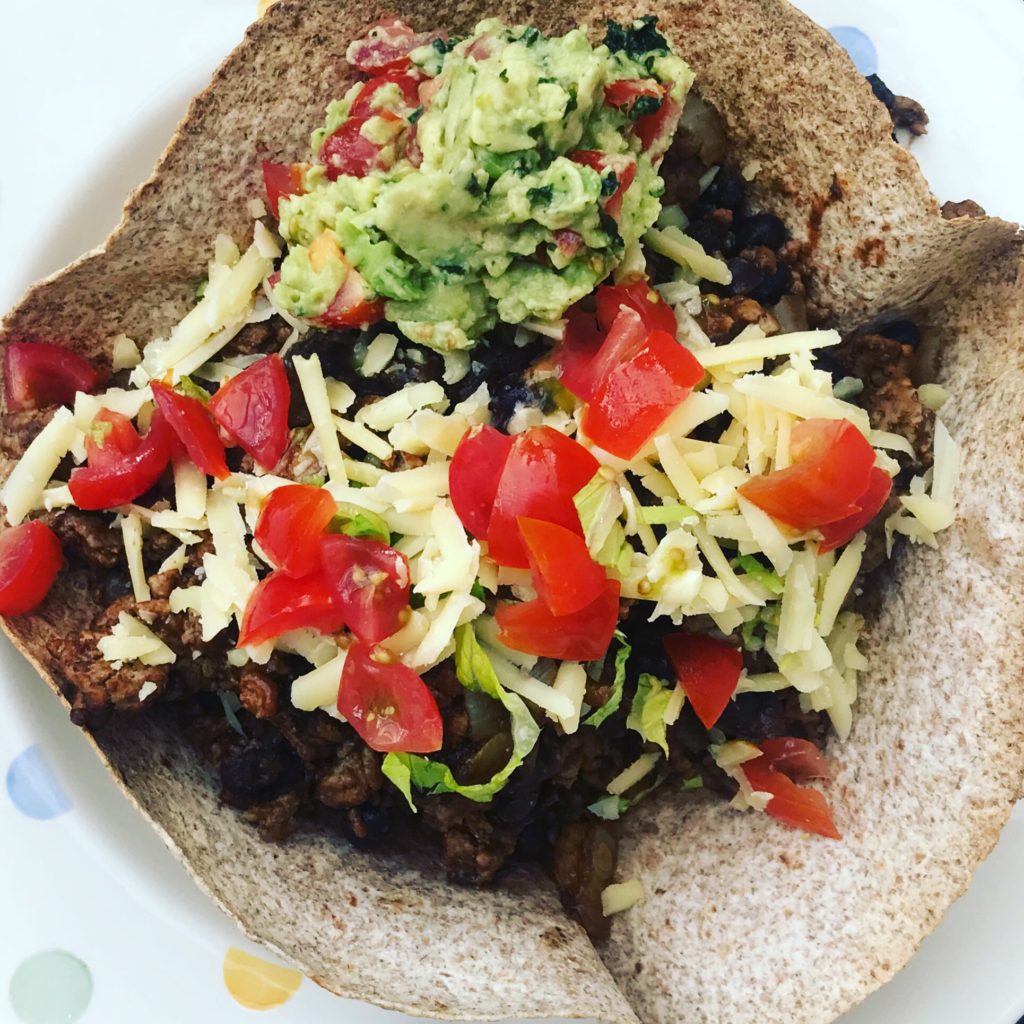 Alongside the pork and beans, which are flavoured (as per Junior’s recipe) with an Old El Paso seasoning mix, you need some chopped tomatoes, guacamole, lettuce and cheese. Plus the vital ingredient: tortilla wraps, which you can use to make your tortilla bowl for your taco salad bowl.

The tortilla bowl is so simply made, but turns a standard meal into something a bit more special. Simply lay your tortillas over oven-proof bowls and bake them in a low oven for ten minutes until they are crisp, and have taken on the shape of a bowl. Then fill them with your pork and beans, and top with guacamole, lettuce, tomatoes and cheese, and serve.

Simple, delicious, and effective, and what’s more ready in less than thirty minutes, so perfect as a mid-week post-work meal. If you want to prepare the pork and beans in advance then you are basically looking at 10 minutes from start to finish.

Thanks to Junior for sharing this delicious taco salad bowl with me so that I can share it with you.

Heat the oil in a pain and fry the pork and onions until they have started to gently colour. One thing that Junior did, and I replicated, is that he kept the pieces of mince quite chunky instead of breaking them down too small, as it adds nice texture to the taco bowl. Add the seasoning mix and ensure it is well combined into the mince. 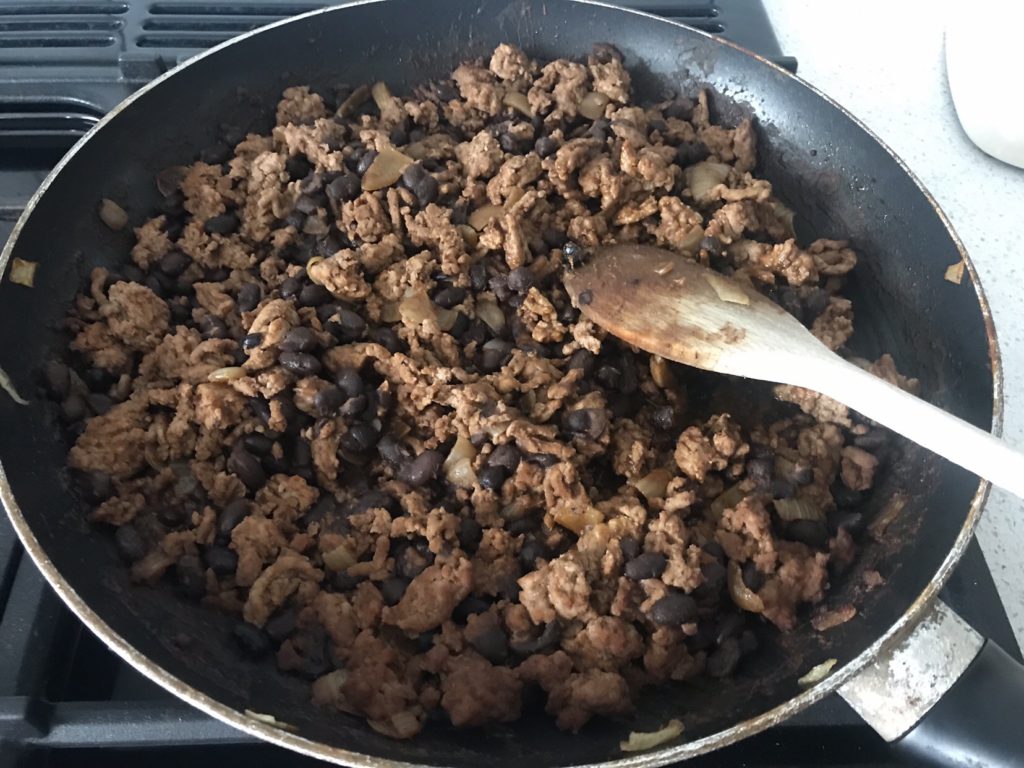 Pre-heat your oven to 160 degrees and place oven proof bowls on a baking tray. Lay the tortilla wraps on top of the bowls so that they drape down over the bowl and take on an inverted bowl shape. 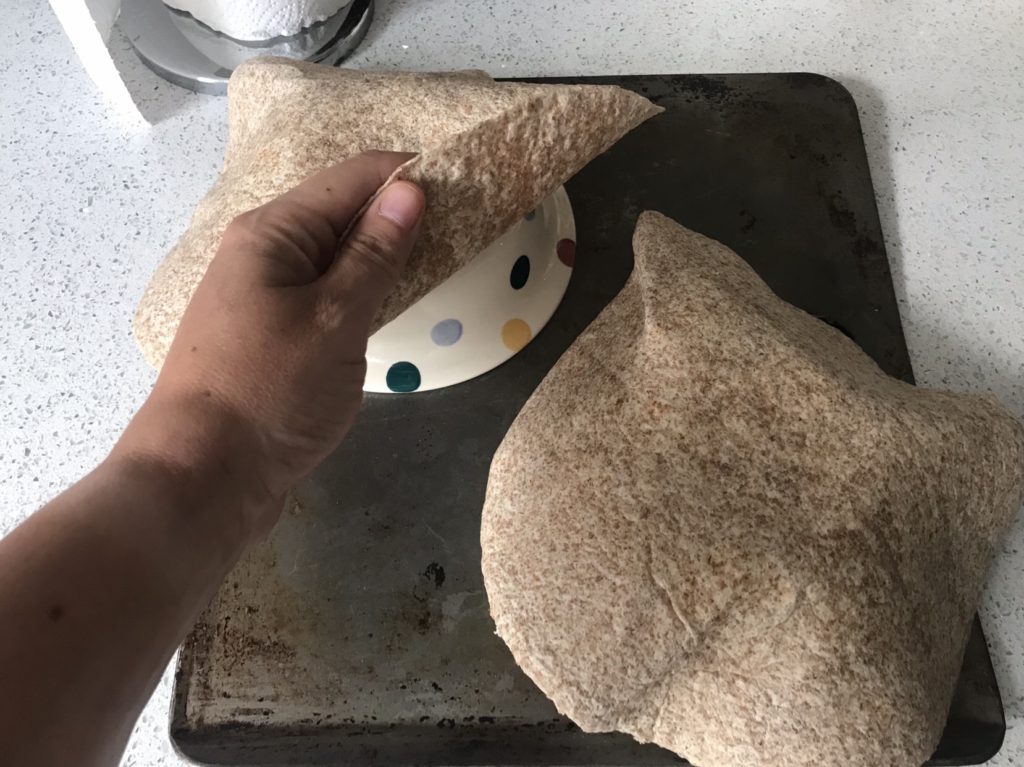 Bake in the oven for around 10 minutes or until they are crisp and slightly browned (you could brush them with vegetable oil to make them golden, but I didn’t bother). 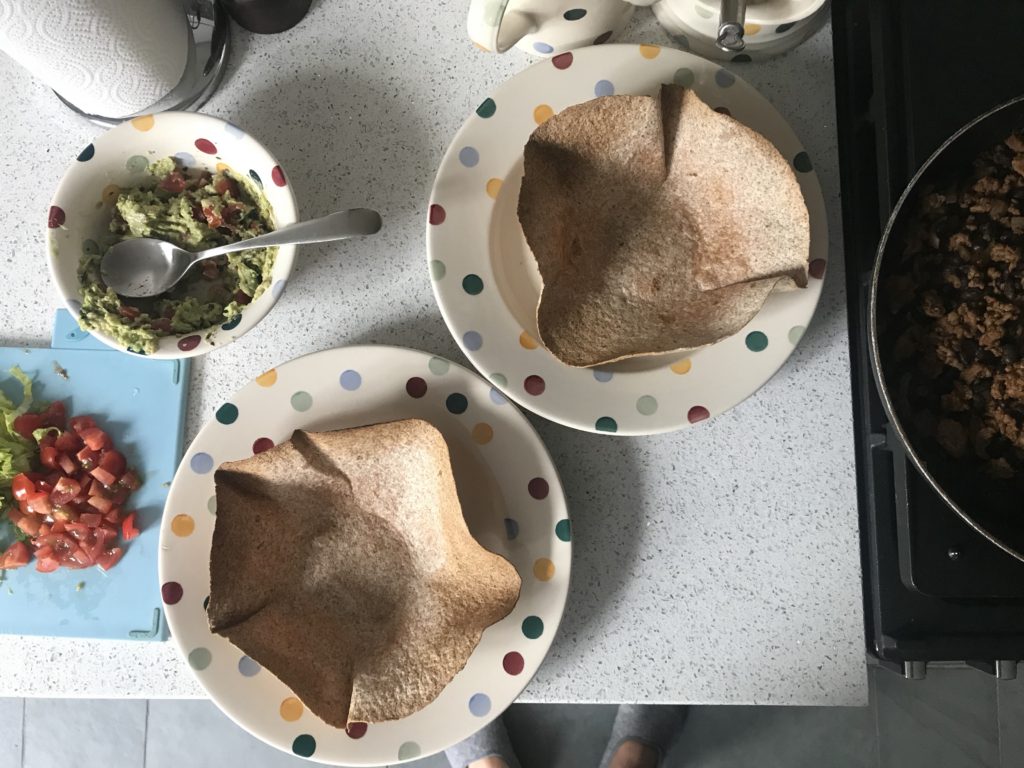 While you are baking your tortilla wraps you can prepare your guacamole and other toppings. For the guacamole, simply mash up the avocado and mix in your other ingredients. Grate some cheese, chop some tomatoes, slice some lettuce, and BINGO, you are ready to go!

Assembling your taco salad bowl is simple: take your tortilla wrap bowls out of the oven and carefully take them off of the actual bowls and put them on a plate.

Fill your ‘bowl’ with your pork mixture, and top with the guacamole and salad – adding as much of each as you like.

I liked to break pieces tortilla off of the bowl and load with mince and toppings for a bite sized piece of deliciousness. 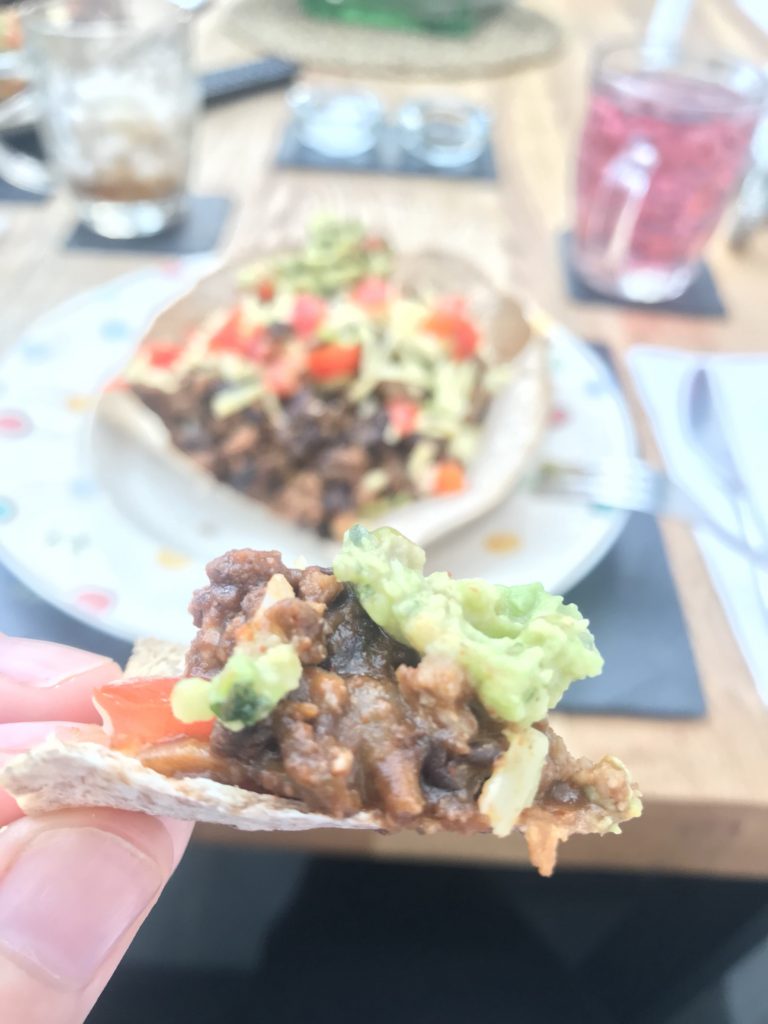 *For a vegetarian version of this taco salad bowl replace the pork mince with quorn mince, or combine the black beans with kidney beans, cannellini beans and butterbeans etc.

**For a vegan version of this taco salad bowl you can replace the cheese with vegan cheese.

And here is a picture of Junior hard at work making ribs! 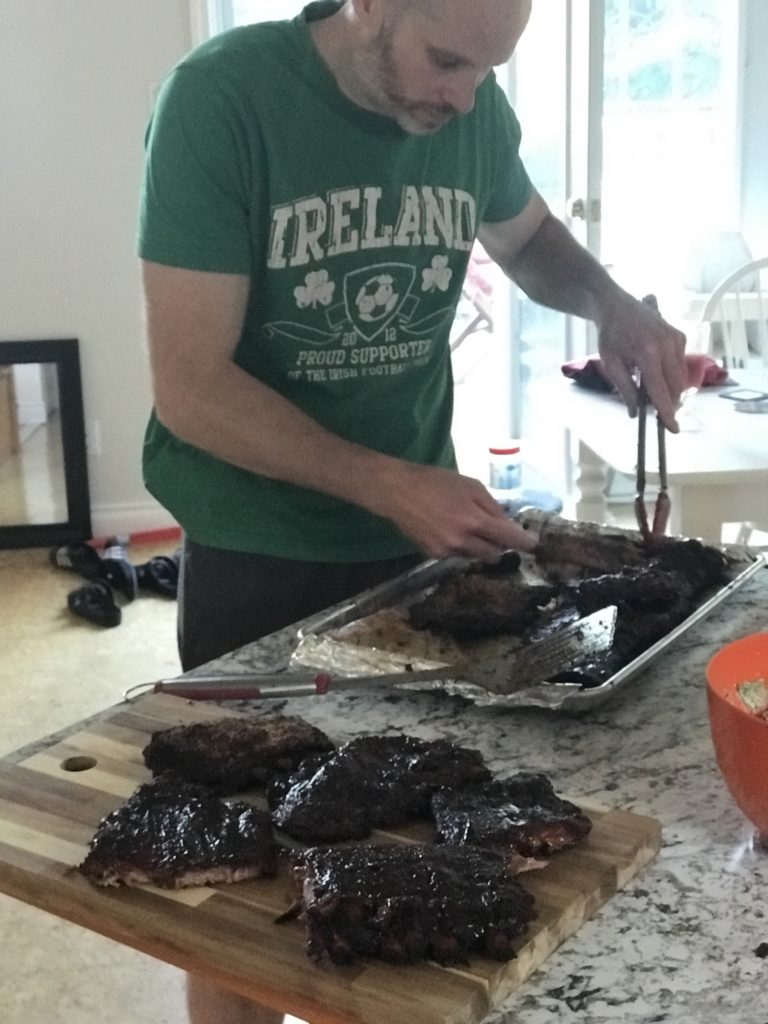