It’s St Patrick’s day, and even though I only have the most tenuous link to Ireland (I sit opposite an Irish girl at work), I am happy to take any opportunity to join in with the craic. Plus, it’s not every day you have the perfect excuse to make Nigella Lawson’s chocolate Guinness cake, which truly is a thing of beauty. And then the leftover Guinness can’t be wasted so why not chuck that into a saucepan with some beef and vegetables to make an Irish stew? … and then what’s Irish stew without mashed potatoes mixed with cabbage to make colcannon? … and then as I made the cake for a friend I needed something for our own pudding and what could be more Irish than Baileys? … and why just drink it when you can make it into a delicious and smooth ice cream without even the need for an ice cream maker? So there you go, an insight into my extremely logical stream of consciousness. This, my friends, is why I am not thin.

If you have never made Guinness cake before, then you should. It is one of the easiest cakes I have ever made, and involves minimal washing up (always a winner in my house). It doesn’t taste of Guinness (I can’t stand the stuff) and the frosting is one of the nicest things I have ever eaten (I use the same recipe to make a cheating cheesecake). It’s likely to require a special shopping trip to buy some of the ingredients, unless you – unlike me – do keep sour cream and Guinness in the house. Oh, and the cake has nearly HALF A KILO of sugar in it. That’s a lot of sugar. Especially for a cake which doesn’t even taste that sweet. So if you believe all the stories about sugar being worse for you than heroin then maybe it’s not the cake for you. But if you don’t believe everything you read (except this blog which, obviously is the gospel) and don’t mind sugar AND booze in your cake, then this *is* the one for you.

So anyway, this sugar-laden behemoth is no good for me to make unless I have someone to feed it to, as Andrew doesn’t really like sweet things … especially if they are flavoured with chocolate. Luckily our friends Isi and Michael invited us over for Sunday lunch, so I warned them that I would be bringing pudding and got baking.

When you make the cake, don’t be alarmed by how liquid the batter is. It scared me the first time I made it but trust in Nigella, and you will be fine. However, don’t make the mistake I did first time around and use an old springform tin which has a tendency to leak, as the cake batter will most likely find its way to the bottom of the oven before it cooks. Epic fail. Getting chocolate Guinness cake off of the bottom of the oven is not fun. I think there was probably still some there when I moved out …

So basically you melt the butter in the Guinness over heat, mix in the cocoa and (large amount of) sugar, then add the eggs, sour cream and vanilla. Finally whisk in the flour and bicarb and voila – you are done. I would advise making the cake several hours before you want to eat it as you need to allow it to cool completely in the tin before you ice it, and that can take some time as it is a big old cake.

For the icing you whisk together 300g of cream cheese with 125mls of double cream and icing sugar. Nigella says 150g of icing sugar but I use less than that, and just keep tasting it until it is as sweet as I like it – maybe 100g is enough for me. Now I have just realised that I used 300mls of double cream when I made mine this morning – and it was so lovely, light and creamy. I recommend that you use lots of cream like I did because it really does make the icing gorgeously light, but obviously you don’t need it if you prefer a more cheesecake-y frosting. As you can see from the picture on the left, Isi’s daughter Suzie liked the icing so much that she licked it off the inside of the cake carrier, so I am sure she would recommend the extra cream as well. And how can you say no to that face?

Isi made a magnificent Sunday roast for us: roast chicken stuffed with garlic and lemon, roast potatoes, stuffing, yorkies, broccoli, carrots and green beans, with gorgeous gravy made from the meat juices. After stuffing our greedy little faces we wandered off to the park to walk off lunch and make room for cake. Even if I do say so myself, the cake was yummy. I was glad to leave it with Isi though as otherwise I would have kept picking at it for the rest of the week, and my body really doesn’t need any additional bulk.

With the leftover Guinness I wanted to make an Irish stew, but I wanted to make a healthy version (mainly because I wanted to eat the Baileys ice cream for pudding without feeling too guilty). Stews are so easy for me because I never bother sealing the meat or frying off the veg first: just chuck the diced meat (extra lean diced beef this time), veg (carrots, leeks, onion), a tin of tomatoes, the leftover Guinness (but you can do without if you don’t have it – or chuck in some red wine if you have a bottle open), an oxo cube, water, worcestershire sauce, chilli flakes, garlic and a star anise (not strictly Irish I suppose) in a saucepan, bring to the boil and then simmer for at least two hours. I actually made this stew on Saturday as I find the flavour of stews become more intense after a day or two sitting in the fridge. And coming home from work in the knowledge that you have a dinner that will be ready in a few minutes waiting for you in your fridge is a pretty nice feeling. 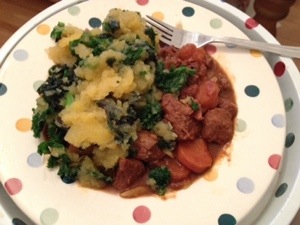 I served mine with colcannon, which is usually mashed potatoes mixed with cabbage, but I made it with swede instead of potato. Surely the goodness of swede and kale offsets the evilness of sugary Guinness cake, and means I am allowed to eat more Baileys ice cream? Anyway, it was delicious.

But oh, the Irish nectar that is Baileys … how can there be a St Patrick’s Day feast without it? Actually, whilst I do love Baileys, I prefer the Welsh version made by Penderyn. That’s more expensive and harder to get hold of though, and frankly I wouldn’t waste it by making it into ice cream … and obviously it’s not Irish. So I don’t know why I mention it really, except to say that if you ever are near the Penderyn distillery near Brecon in South Wales, you should go and try some. You’ll be converted.

Okay so back to the ice cream: first of all, do not panic. This ice cream doesn’t even need an ice cream maker! Yes, you read that correctly. It is the simplest ice cream in the world to make, and you can substitute the Baileys with other flavours to make pretty much any type of ice cream you fancy. It is dangerously easy in fact. Luckily for me, my freezer is packed full of freezer bags full of mystery leftovers which I have forgotten to label, I don’t have room to store homemade ice cream. Otherwise, I’d obviously have to eat it all. 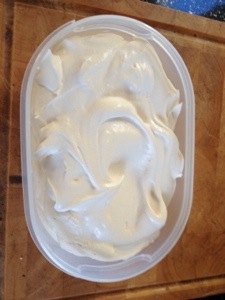 So if you don’t fancy Baileys ice cream then you could substitute the booze with some vanilla extract and when it is whisked you could stir lemon curd or crushed fruit or jam or chocolate spread or peanut butter into the mixture before you freeze it. Or little bits of crushed meringue could be nice (maybe a bit too sweet …). Or instead of the vanilla extract you could mix in fruit juice or coffee or chocolate or another liquor. The possibilities are endless.

In my experience the ice cream doesn’t keep well in the freezer for more than a couple of weeks, so eat it quickly. But I don’t think you will have to worry about that.

So whilst I made these recipes to celebrate St Patrick’s Day, you certainly don’t need to wait until next year to make them. If you do fancy trying them yourself, then here’s how to do them. 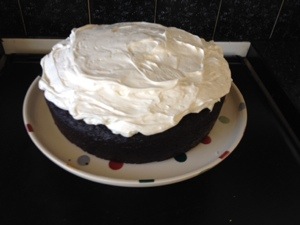 In a large saucepan melt the butter (I slice it) into the Guinness over a medium heat. In a separate jug mix the eggs, sour cream (irritatingly I couldn’t find sour cream in 142ml containers – hopefully you will be able to) and vanilla. Weigh the cocoa (Green and Blacks organic 70% cocoa is the best for this in my view) and sugar (eeeeeevvvvvviiiiiiilllllll) together. The flour and bicarb should be weighed out separately. Okay that is a lot of washing up for different weighing bowls, but it’s not icky, messy washing up which takes forever – it’s just wiping a bit of flour out of a bowl – easy. So, when the butter is melted take the pan off the heat. Whisk in the sugar and cocoa mix. Then in goes the sour cream and egg mix. Then finally in goes the flour and bicarb. Whisk it all together well (especially the bicarb because if you end up with a lump in one end of the cake then that side will erupt like a mini volcano when it is in the oven) and pour (it is very liquid) into a greased and lined tin (I lightly grease a silicon cake ‘tin’ which works perfectly) for at least 45 mins at 180 degrees. I find my cake always takes more like an hour to cook, so don’t be surprised if it takes longer than Nigella says. The cake will come out firm to the touch and a skewer will pierce it and come out cleanly when it is cooked through.

Once it is completely cooled then take it out of the tin and whisk together the cream cheese, cream and icing sugar until thick and delicious. Top the cake with the frosting so that it looks like a pint of Guinness. Nigella says this serves 12 but I think you’d get even more slices out of it, as the cake is very rich. 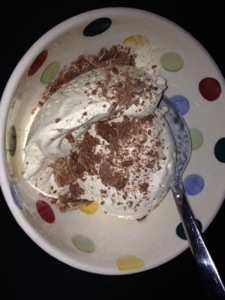 Whisk all three together: my original recipe (based on Nigella’s no-churn coffee ice cream) suggested you should have 4tsp of liquor mixed with the cream and condensed milk but I reckon I used at least double that – I basically kept adding the Baileys until it tasted as I liked it (and remember, flavours become less intense when they frozen, so you need a little bit more Baileys than you might think … at least I am sure I was told that before!). Freeze for at least 6 hours, or overnight is better, and serve with a crumbled flake. Enjoy!