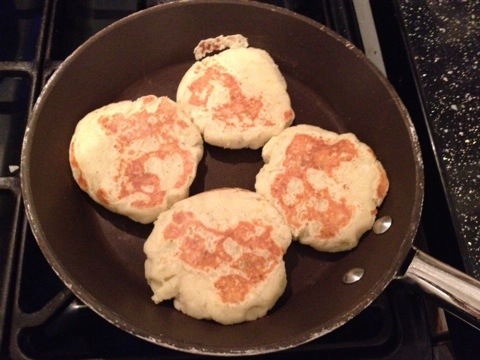 If you haven’t ever tried them before, then I recommend that you give cured salmon fillets a try. Cured salmon, when I have bought it at least, comes in fillets which have been lightly smoked, so that they have some of the flavour of smoked salmon but still need to be cooked. It’s rather like smoked haddock, and if you can’t find cured salmon then smoked haddock would indeed be a good replacement in this recipe.

And the recipe itself was one I saw on Saturday Kitchen a few years ago, where Irish chef Danny Millar made a concoction with the cured salmon, potato cakes, poached eggs and a tart sauce. I liked the idea of this combination of flavours and bought some salmon straight away (it’s available from Ocado here), and made the dish for breakfast one day (it sounds an odd breakfast dish but think of it as a kind of eggs benedict in terms of flavours). Now my local fishmonger sells hot smoked salmon fillets – which I might be a tiny bit addicted to – I have been experimenting with other smoked fishy dishes, like hot smoked salmon pasta. However, the cured salmon was on a flash sale on Ocado’s website the other week when I did my weekly shop, so I ordered some and decided to make this dish.

It might look a bit complicated, but it’s very easy to make, and would make a good dish to show off with if you are having people over (that’s never my objective when people come over for dinner, but I do like them to feel I have made an effort when they bother to schlep across London to spend an evening in the company of us and the cats, and I do like people to feel like they have been well fed … yes, it’s true, often to the point of sinking into a food coma!).

The salmon just needs to be baked in the oven for around 15 minutes. The potato cakes are really easy to make. You need mashed potato, flour and some seasoning. I made mash especially for this dish but it would be a good way to use up leftovers. Mix the cooled mash with plain flour, salt and pepper and form into flat patties, around 1cm thick. I dry-fried mine for a few minutes each side until nicely coloured (you are supposed to then fry them in butter according to Danny Millar’s recipe but I decided to save some calories) and then kept them in the oven while the salmon finished cooking and I made the sauce.

I made the sauce by boiling down a chopped onion in a large glug of white wine vinegar until it reduced to around 2 tablespoons of liquid, and then whisked in some cubes of butter. Once the butter melted I added loads of chopped parsley, a couple of teaspoons of capers and some salt and pepper. When I did a taste test I thought the sauce was still too vinegary, so I added some water to dilute it. You want a thin sauce which has the tang of a hollandaise but the freshness of herbs. However, if you didn’t want to faff around with making a sauce you could easily use a good shop-bought hollandaise instead (I like Maille sauces), although I do think this dish works with a thin sauce which gets soaked into the potato cakes.

Poach your eggs and then it’s just an assembly job: potato cakes on the base, salmon fillet on top, poached egg on top of that and sauce at the end. Because of the substance of the potato cakes and the denseness of the oily fish, it’s a filling dish, but one which doesn’t sit too heavily in your tummy. In these quantities, I’d suggest a dinner rather than breakfast.

So you could follow Danny Millar’s original recipe here, or this is what I did. 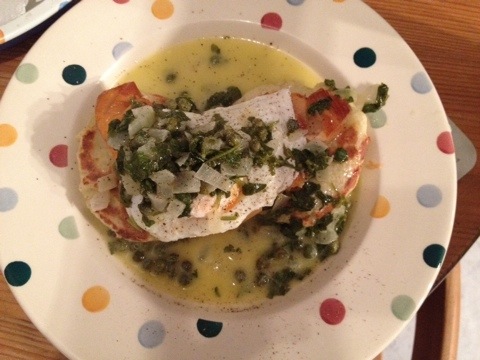 Put the salmon in the oven to roast at 180 degrees. Mix the potato with flour and salt and pepper until it combines to form a soft dough. Make into four patties (like hamburgers) and dry fry for a couple of minutes either side until they are lightly coloured. Keep them in the oven so that they stay warm. Put the chopped onion into a small saucepan with the vinegar and boil to reduce the liquid by half. Whisk in the cubed butter and when it is melted remove it from the heat and add the capers and parsley. Add seasoning to taste and if it tastes a bit too tart then water it down a little with some boiled water until it is more palatable. Poach your eggs and then assemble by putting the potato cakes on your plate, topped with the salmon fillet – which you should de-skin and squish down a little so that it forms a flat layer for the egg. Your soft poached egg goes on top, and then you top it all with the sauce.

To balance out the relative sophistication of this dish, I served strawberry Angel Delight for pudding. In case you think I am going a bit posh. 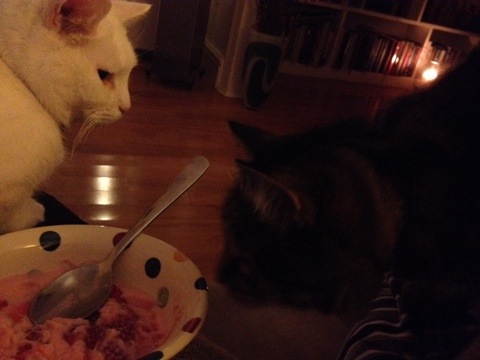