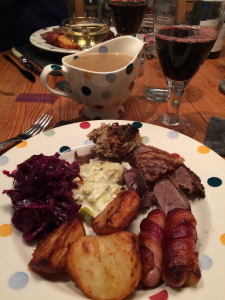 We had some fabulous meals over the festive period (which is still continuing in our house, although I have tried to calm down … a little bit … on the piggy-ness) – we followed the plan which I shared with you in my last post. And in that post I promised you some festive recipes, so here they are.

The prawn cocktail was our Christmas dinner starter – a nice and light start to the marathon meal which was to follow!

The red cabbage featured in our main course, and the mulled pear trifle was our Christmas pudding (as I am not a fan of real Christmas pud) – another relatively light course to follow the main event. 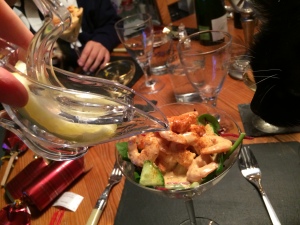 Heat the oil in a small saucepan and add the garlic and prawns. Sautee them with the lemon juice for a few minutes until the prawns are cooked, and add salt and pepper. Allow the  prawns to cool a little while you prepare the salad. I used large martini glasses which I filled with beetroot salad leaves (my favourite), chopped cucumber, sliced spring onion and tomatoes. I know you are supposed to use iceberg lettuce with prawn cocktail but I don’t like it much – it’s too watery with little flavour.

Add the mayo (I use Farringtons Mellow Yellow mayonnaise which is made from rapeseed oil – discovered thanks to one of my foodie penpals), ketchup and mustard to the prawns in the saucepan and mix. The sauce will loosen as it combines with the lemony, garlicky prawn juices. Taste and season if necessary, then top the prepared salad with the prawns, sprinkle with paprika and serve with wedges of lemon (check out my lemon squeezers in the photo – a present from my French friends Odile and Sophie). 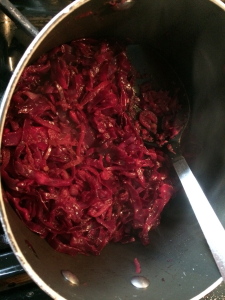 Charley’s red cabbage for Christmas – makes loads, but it can be frozen after cooking

My friend Charley sent me this recipe for his Christmas red cabbage – he says it’s like Christmas in your mouth, and I agree. I am hoping he’ll share more recipes with me when he and his lovely family return to the UK from Sweden in the new year – he’ll be using his carpentry skills at Wood That I Could. 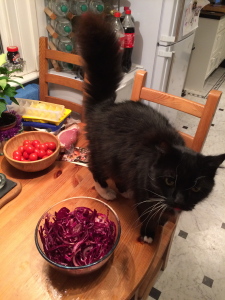 I will be inviting him over to our house for dinner, although last time he visited he ended up being attacked by Betty the cat – even though at the time she was a mere kitten (he was very drunk!). Anyway, enough reminiscing and back to the recipe …

Finely shred one head of red cabbage and put it in a large non-metallic bowl. Add the grated onion and garlic, the zest and juice of two oranges (I used satsumas instead as we had them in the fruit bowl), 5tbsp red wine vinegar and 50g caster sugar. Leave overnight somewhere cold, mixing occasionally.

When you are ready to cook the cabbage, melt the butter in a saucepan, chuck in the cabbage and its liquid along with a grated apple and cook gently until it’s done: about 20 mins to half an hour, but when you’re happy with the texture its done.

I served this with our Christmas dinner, and it was equally delicious cold the next day with cold meat and pickles. My mum was very impressed! 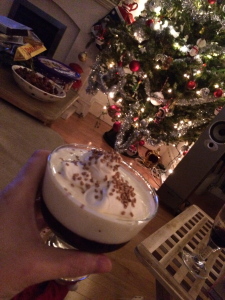 I was inspired to make this pudding by this recipe, but in fact I ended up tweaking it quite a lot. First, take two pears and peel them and halve them lengthways. Then add them to a saucepan with the wine and mulling spices (received in a recent foodie penpal parcel), bring to the boil and simmer for 25 minutes until the pears are tender. As the original recipe used half a bottle of wine I thought we’d be able to drink the other half as mulled wine on Christmas eve, but the bottle of plonk we chose was pretty harsh, so I ended up boiling it down and using it all for the trifle jelly. 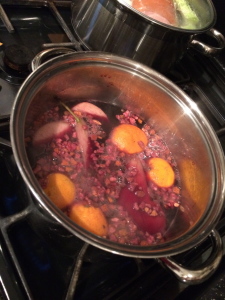 So you take the pears out of the wine and strain the mulling liquid, then mix the strained liquid with the gelatine leaves (which have to be soaked in water first to make them soft). Then I split the jelly liquid between four glass bowls and added some frozen berries and chopped mulled pear to each (there’s quite a lot of pear so I ended up with some leftovers, which I am intending to have with rice pudding tonight). The jelly needs to set, so I made the pudding to this stage on Christmas Eve and put them to bed in the fridge until Christmas Day.

On Christmas morning, in between peeling the veg and wrapping the pigs in their blankets, I finished the trifles by topping them with Madagascan vanilla custard from Waitrose. Actually the custard was a bit too liquid for the job, so next time I’ll make my own using a creme patissiere recipe (so it’s not quite as liquid) or using Birds custard, which is my favourite, even though I know it shouldn’t be. Mmmmmmm. 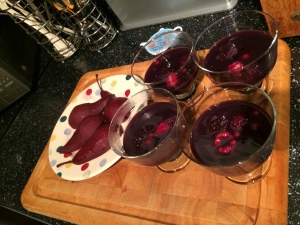 The custard was also very sweet, so I topped each trifle with whipped double cream instead of the chantilly cream I had planned to make. The cream almost sank into the custard so I just blobbed a bit on top instead of covering all of the custard. Then I topped the cream with some golden sprinkles to make each trifle look even more festive. I was tempted to use red and green edible glitter to decorate the trifles, but I don’t think Andrew would have eaten them if I had used glitter, edible or not!

I hope you all had a very Merry Christmas. If you are still wading through leftovers, my next post will give you some recipes to use them up.  Cheers! 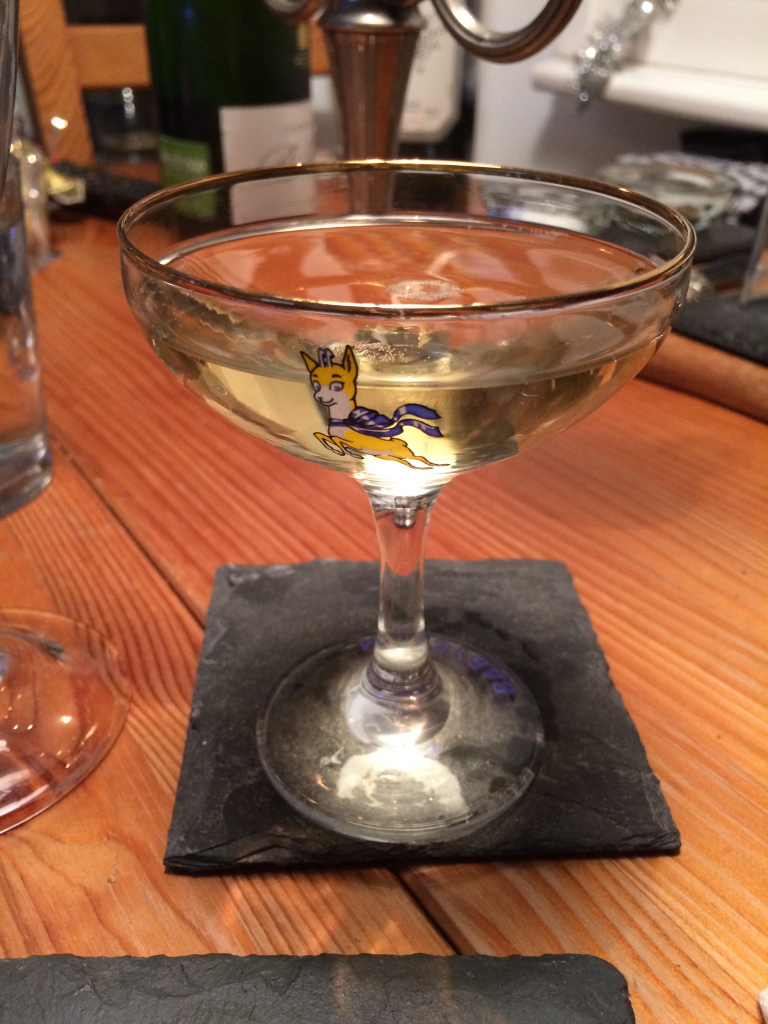