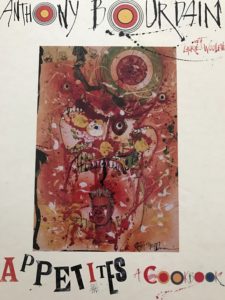 Andrew and I love Anthony Bourdain. His TV shows are a perfect mix of travel and cooking, so that they appeal to us both, and although I don’t think he’s the kind of person I’d want to know (man, he’s scary), he is entertaining, witty, and writes a great book.

His latest book is ‘Appetites: a cookbook‘. It’s the kind of cookbook that you would hate if you like detailed recipes and pictures, as there are neither in this book. Instead you get an anecdote relating to the recipe, an ingredients list, and a brief description of the process to follow to make it. Or for burgers you simply get a list of don’ts!

There were plenty of recipes in here I could make, but I decided to restart the Cookbook Challenge with something simple. I chose the roast chicken as done well it’s a thing of beauty, and I also picked Pommes Anna from the book as an accompaniment.

The chicken was roasted with more butter than my chickens ever normally see (just a splash of oil, garlic and seasoning is all I use, sometimes with a splash of lemon juice if I happen to have one hanging around). You smear underneath the skin of the chicken in it, along with lots of black pepper and herbs and simply roast it in the oven, and then use even more butter to make the sauce afterwards.

For the potatoes you simply slice them thinly and layer them in a pan with MORE butter and pepper, and bake them.

This is an extremely simple pair of recipes to make, and both dishes were delicious, although even for black-pepper obsessed Andrew there was too much of it on the plate, so I’d go easy on it next time. 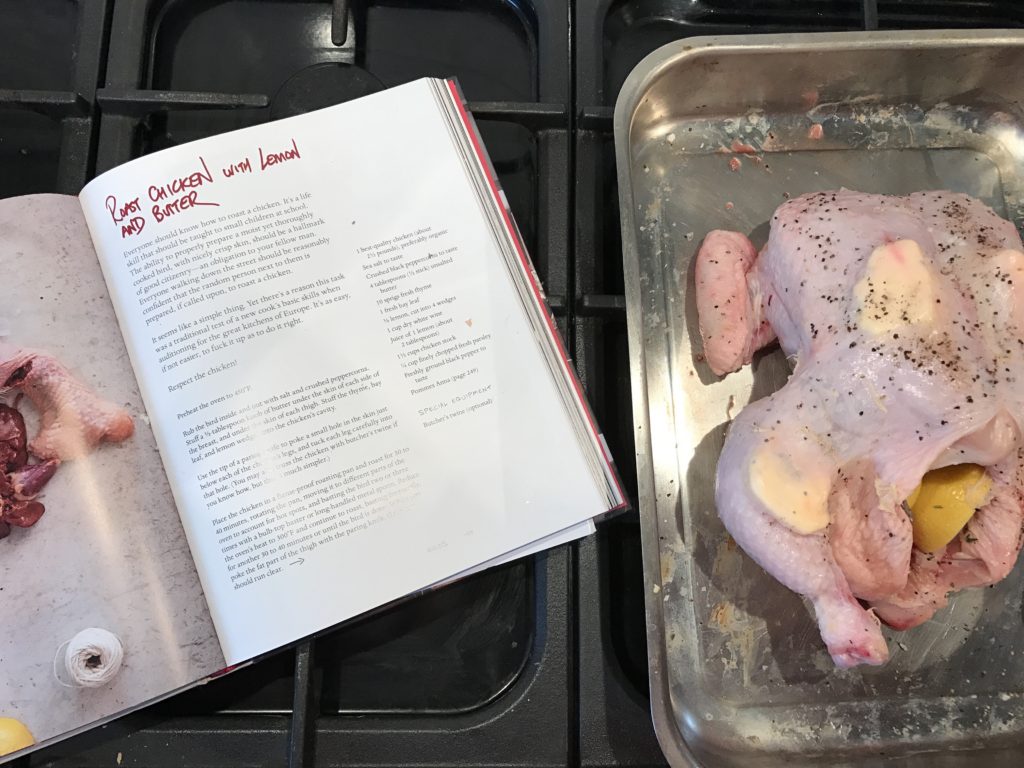 Although I wouldn’t necessarily replicate his chicken recipe as I like my own, I found the sauce accompaniment (meat juices with stock and BUTTER) was delicious and silky, and didn’t taste like it was swimming in butter

My adaptation of Bourdain’s recipe is below, but I highly recommend his cookbook. 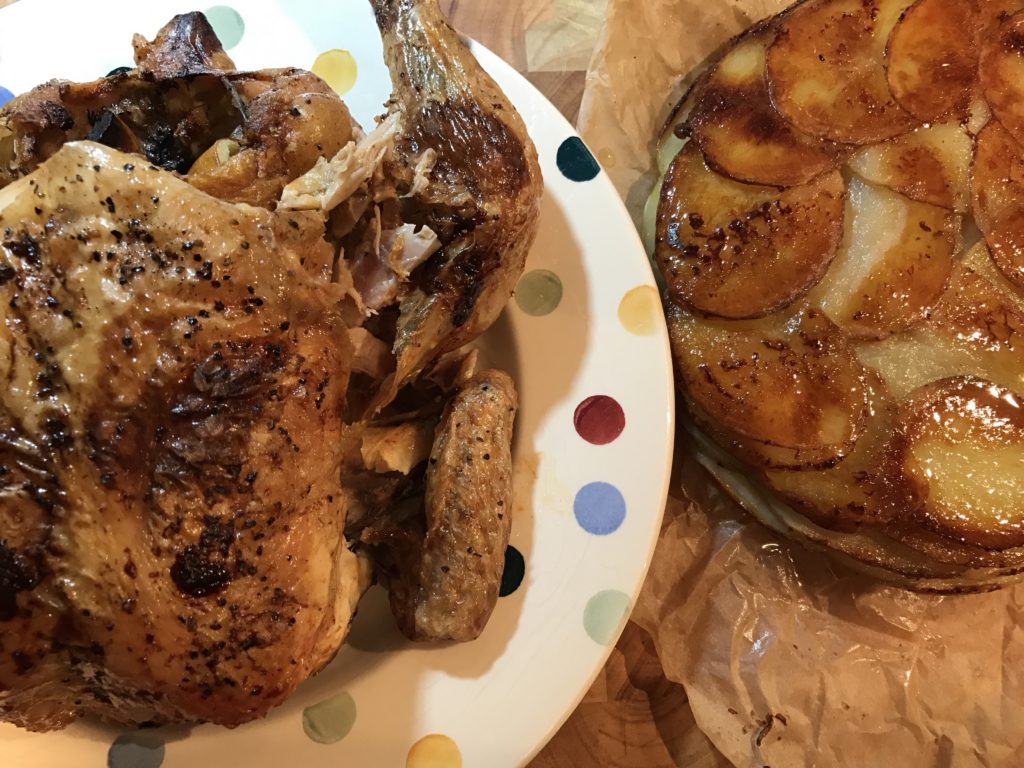 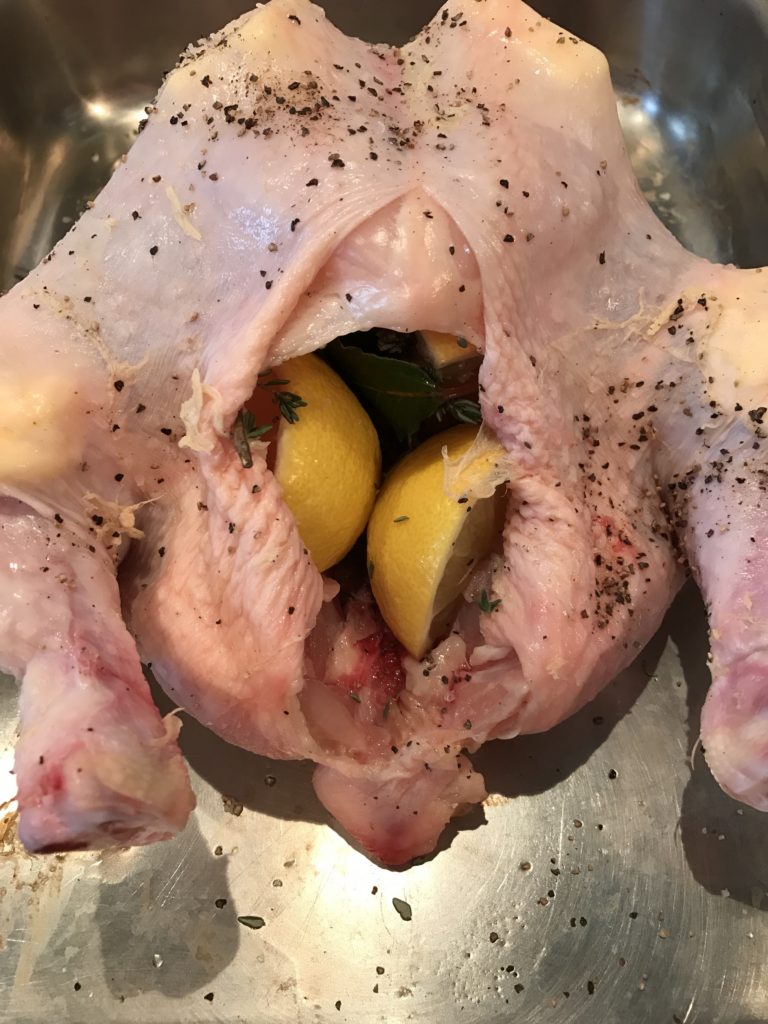 Rub the chicken inside and out with salt and pepper, then stuff under the skin of the breasts and legs with a knob of butter (use half of your total amount). Cut one lemon into wedges and stuff it into the cavity of the bird along with a shake of thyme and the bayleaf.

Roast the chicken for approximately 1 hour at 180 degrees (check the cooking instructions on the chicken but I find when the chicken is stuffed with lemon it cooks more quickly because it is also steaming from the inside). You want all the juices from the chicken to run clear.

Let the chicken rest and skim off any obvious fat from the chicken juices (I didn’t bother as there wasn’t really any …). Put the pan on a high heat over the gas and stir in the chicken stock and lemon juice. Make sure you stir in all those lovely caramelised bits of chicken. Reduce by half and then whisk in the remaining (2tbsp) butter a piece at a time until you have a thick and silky sauce. Add the parsley and salt and pepper.

Serve with the Pommes Anna, which you make like this. 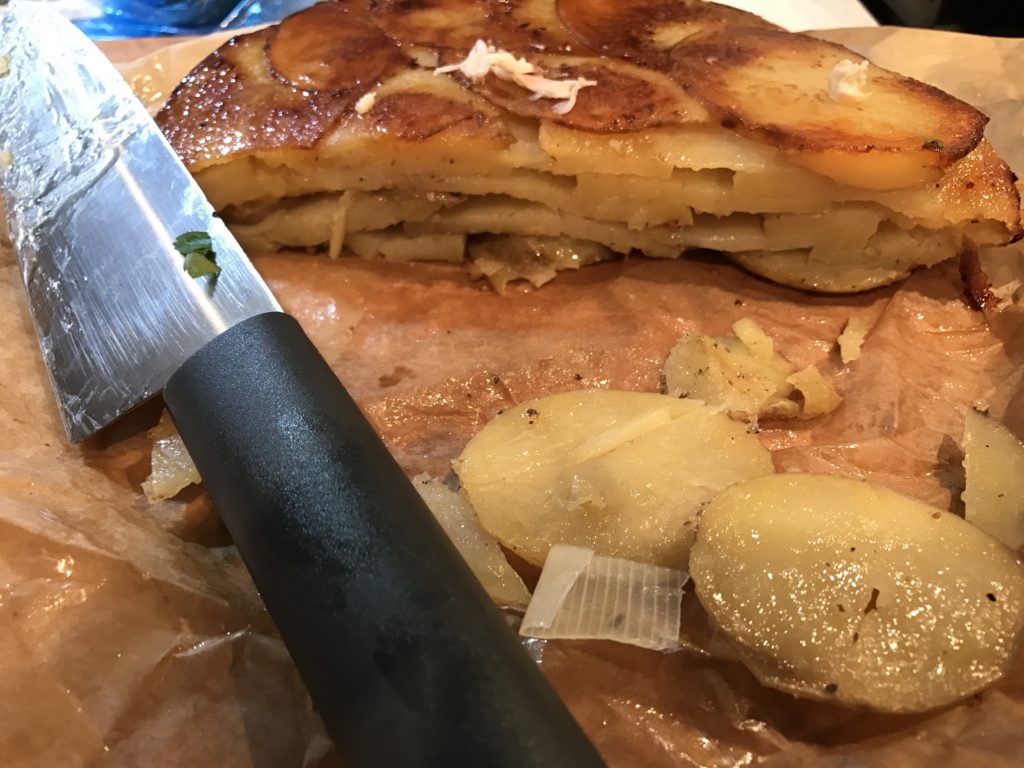 Slice the potatoes thinly into rounds (I didn’t bother to peel them, and just hand sliced them). Butter grease a metal pan which can go into the oven (I used a cast iron frying pan with a metal handle). Lay the sliced potatoes into the pan and dot with butter and season each layer. You want to end up with a thick potato ‘cake’.

Top the potato cake with a final dot of butter and then cover with greaseproof paper and a lid (or if, like me, you don’t have one, use some tin foil to top the pan). Cook in the oven with the chicken, until the potatoes are golden brown and if you pierce with a knife it runs through the potatoes without resistance. Allow to rest slightly, and then invert onto a plate and serve in slices. 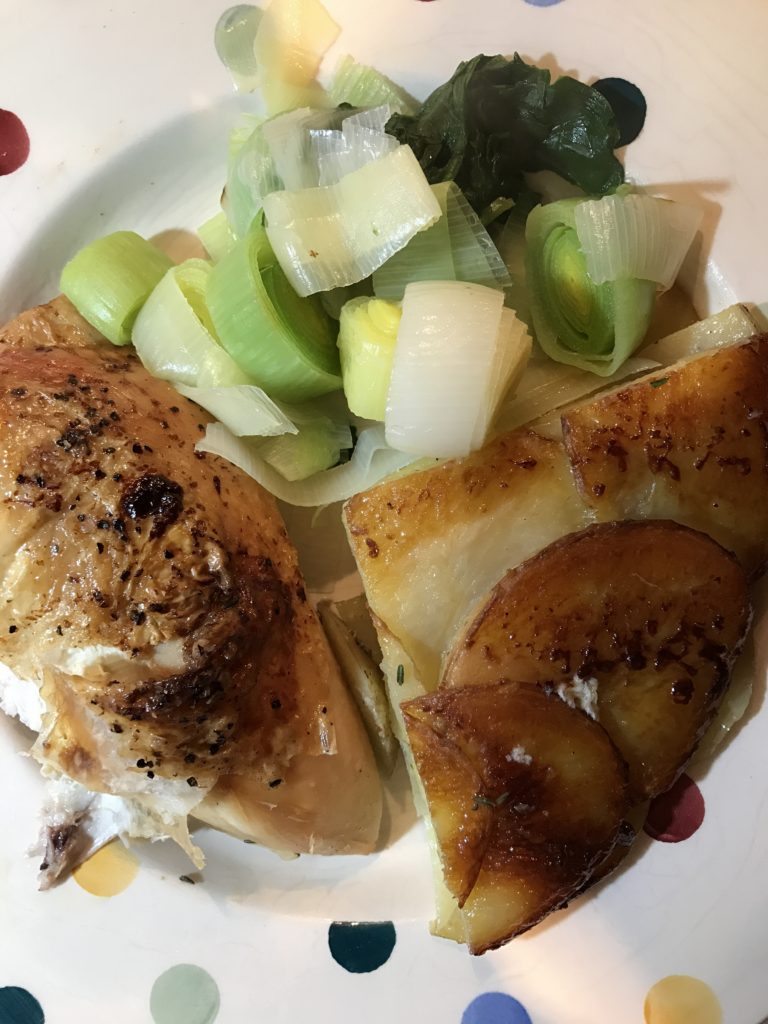