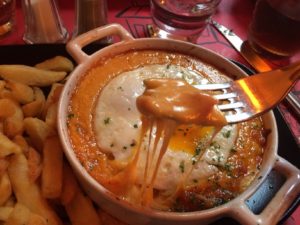 When I recently visited Lille as an early birthday celebration (as on my actual birthday I will be quite heavily pregnant) I really didn’t expect to see the dish of the day in many restaurants proudly proclaimed as “Welsh”.

As we walked up the main foodie street ‘Rue de Gand’ I spotted a restaurant called ‘Well Welsh’ I was completely stunned, and attempted to discover more from the owner … which was always going to be slightly challenging as my French is by no means fluent (although working for a French company means I have picked up a good amount of French over the last 10 years to top up my A-Level standard).

What I believe he told me is that the dish is composed of beer-soaked bread, ham, and local Maroilles cheese melted with mustard. So a kind of Welsh Rarebit, I thought, and decided I’d have to try it at the first opportunity.

This opportunity came on our second evening in Lille, when we had a charming little restaurant recommended to us, called Les Compagnons de la Grappe. Welsh was on the menu, complete with a fried egg, and so I decided to give it a try. 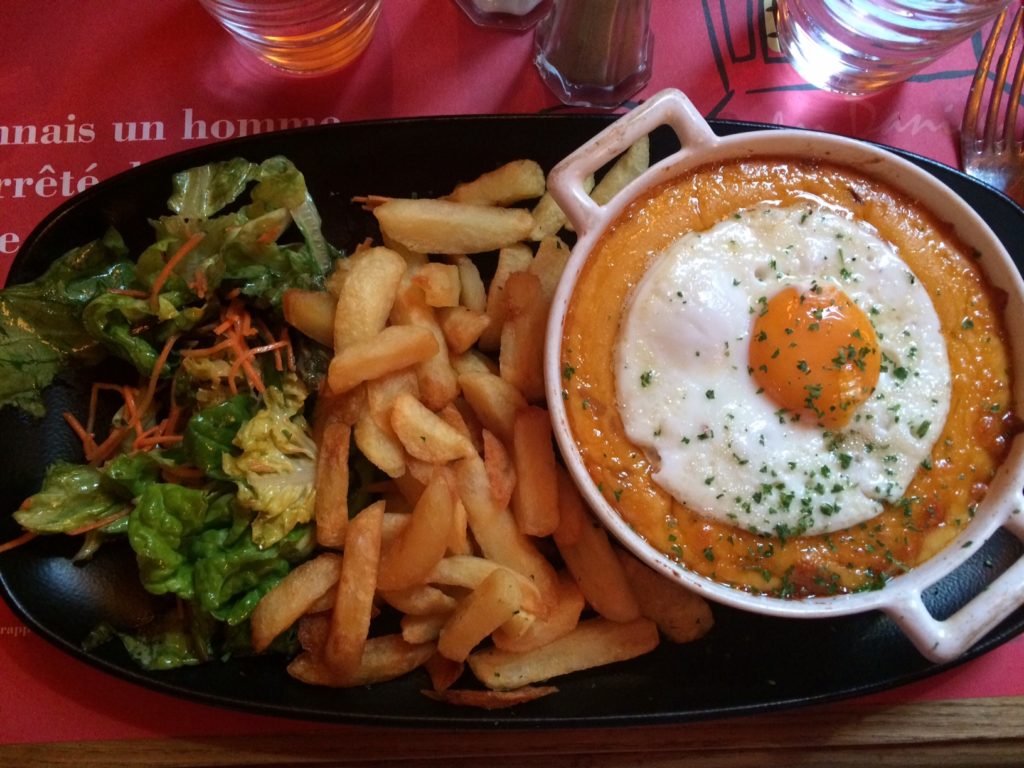 Well my goodness, I have never had a Welsh rarebit quite like this. What was bought to the table was essentially a casserole dish filled with melted cheese and topped by a fried egg. By digging around in the cheese I think I found some bread and ham, but cannot be sure, as there must have been (and I am not kidding here) at least 500 grammes of melted cheese in my dish. To make sure I didn’t go hungry the Welsh was accompanied by a pile of chips and some salad.

I won’t deny that this is a tasty dish, but even my love of cheese was defeated by it. Because the cheese wasn’t mixed with anything else (like wine or garlic as with a fondue) there was nothing to cut through the richness of the Maroilles cheese (which is pungent but delicious). Instead of chips to accompany the Welsh I think I would have preferred some pickles and bread.

However, despite not being able to finish the cheese (Andrew was delighted to help me out) I did manage to eat a speculoos mousse which was delicious. Speculoos, for those of you who don’t know, are caramel and spiced biscuits which I have previously made. The biscuits in this instance had been crushed to flavour the mousse and it was delicious and light (although probably not quite as light as I should have gone after the Welsh!). 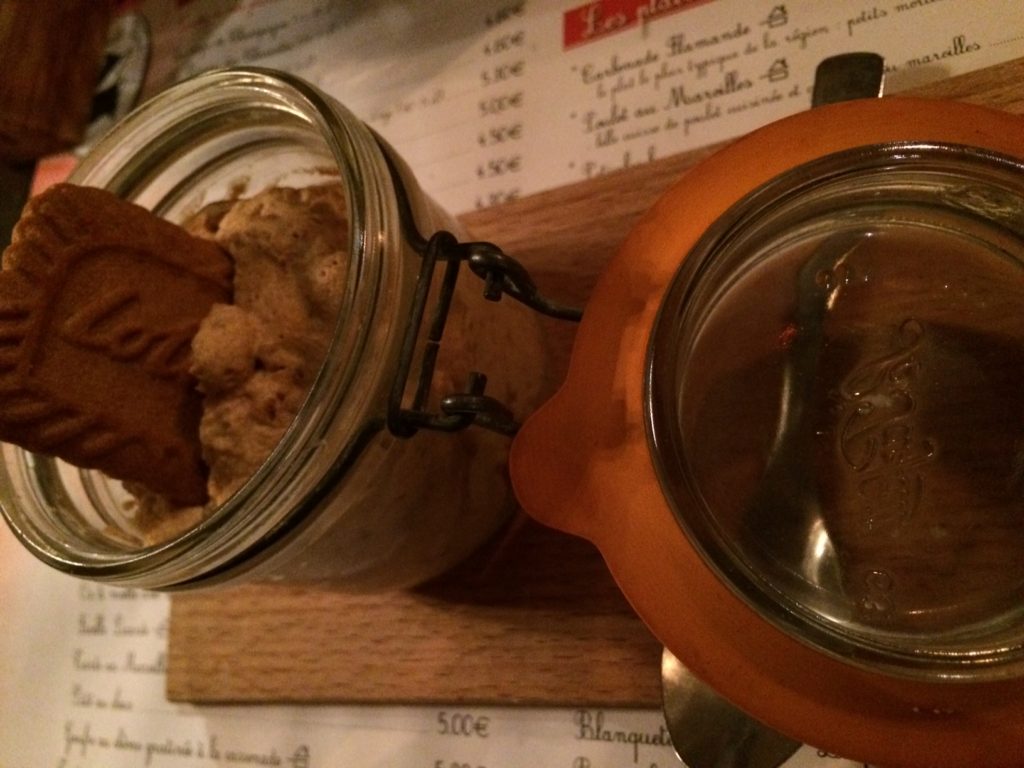 Andrew was jealous of my Welsh experience and decided to try the dish himself on our final night in Lille, where we were back again at Rue de Gand in La Vielle France restaurant. Although the dish was similar to the one I tried, his cheese was mixed with mustard and this made for a much tastier version. Bread and ham were again pretty much non-existent in the mound of cheese, but he thoroughly enjoyed it (plus the chips which accompanied it!). Once again I couldn’t resist a speculoos mousse, which was again delicious. 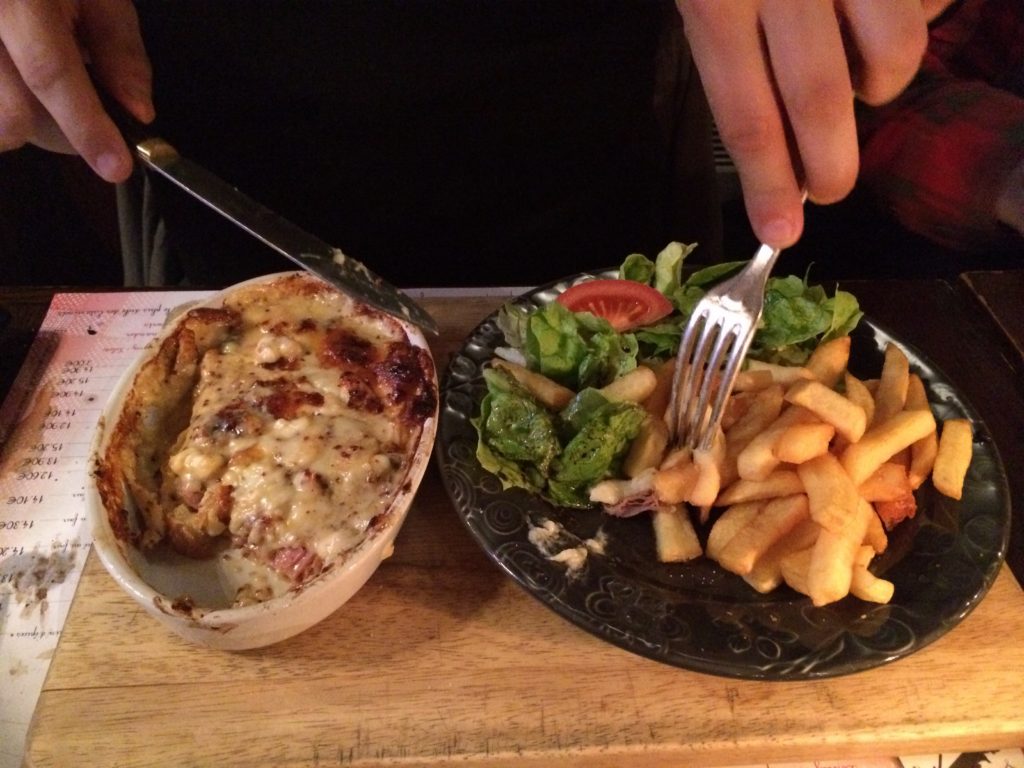 So our Welsh experience in Lille was overall a success, and I bought a package of Maroilles cheese home so I can try and make it myself (cooked cheese is a pregnant lady’s friend, as pasteurisation doesn’t matter). I haven’t opened the cheese yet, but each time I open the fridge door I am reminded that I need to use it soon!

Other things of note in Lille were … the Maroilles cheese tart (a light quiche made of the local cheese): 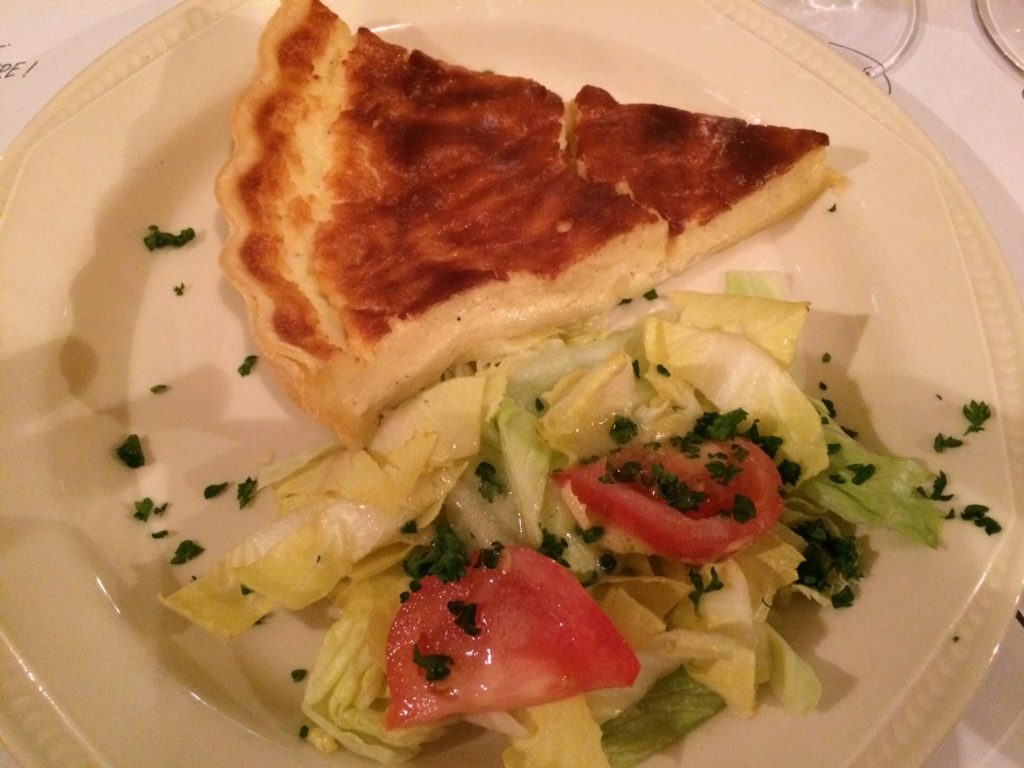 Ch’ti beer, which was Andrew’s favourite: 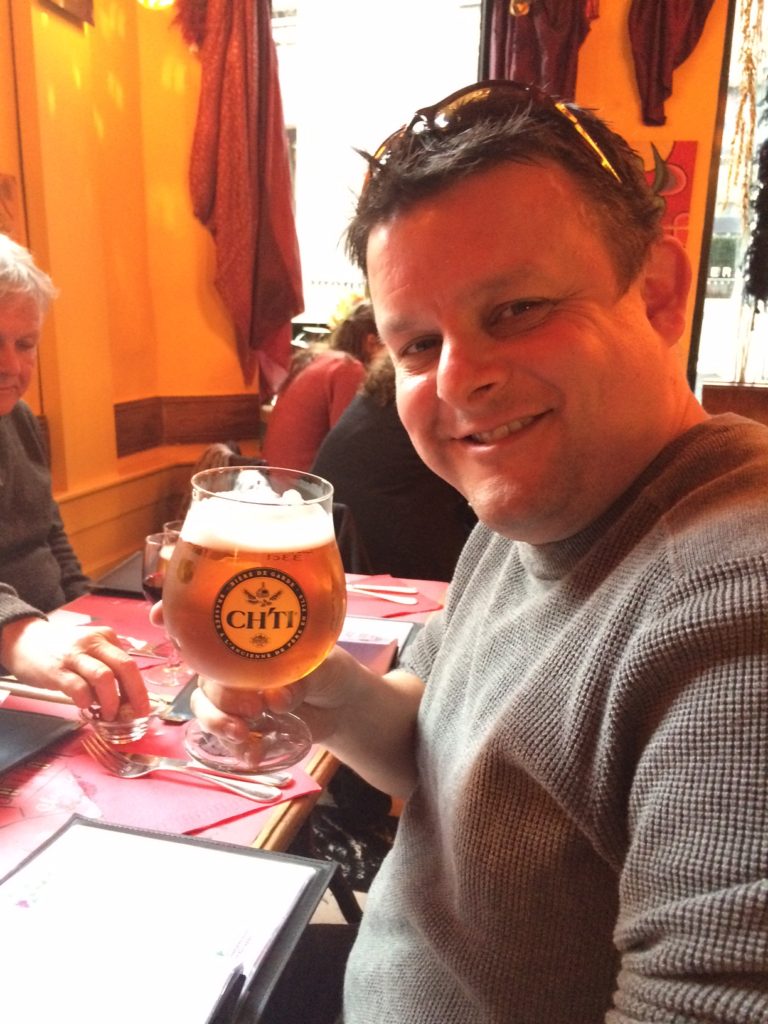 Be Yourself snack bar, where I discovered the Kinder cookie: 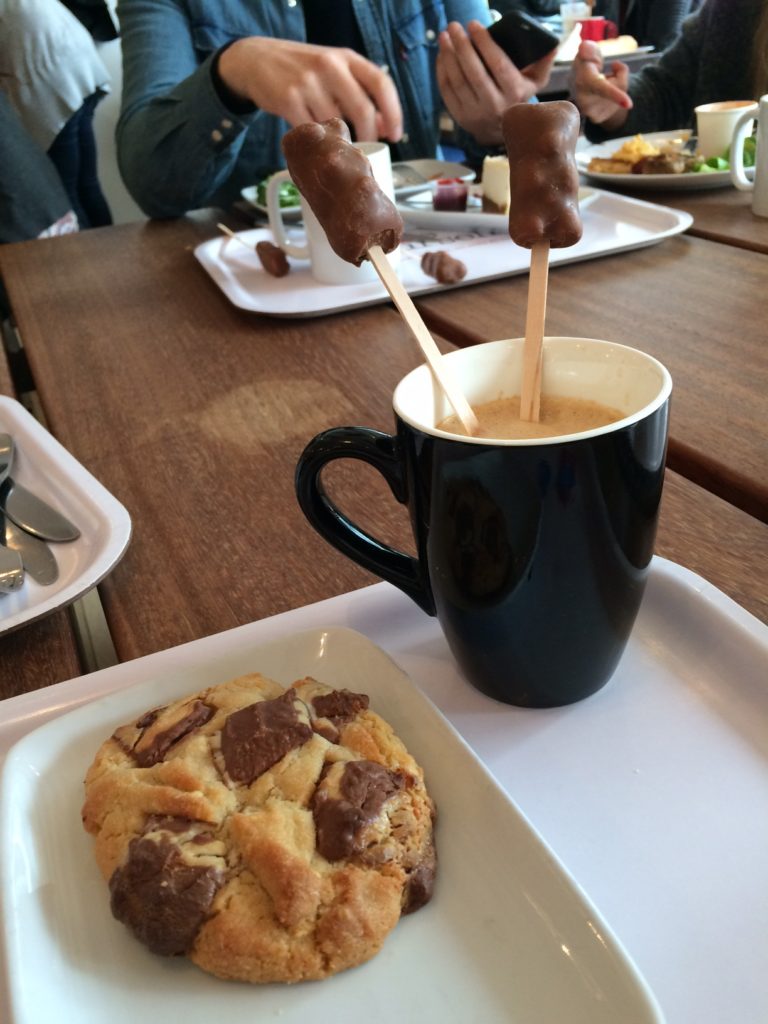 Aux Merveilleux, macarons filled with cream then encased with cream and dusted with tasty flavourings (including the lovely speculoos): 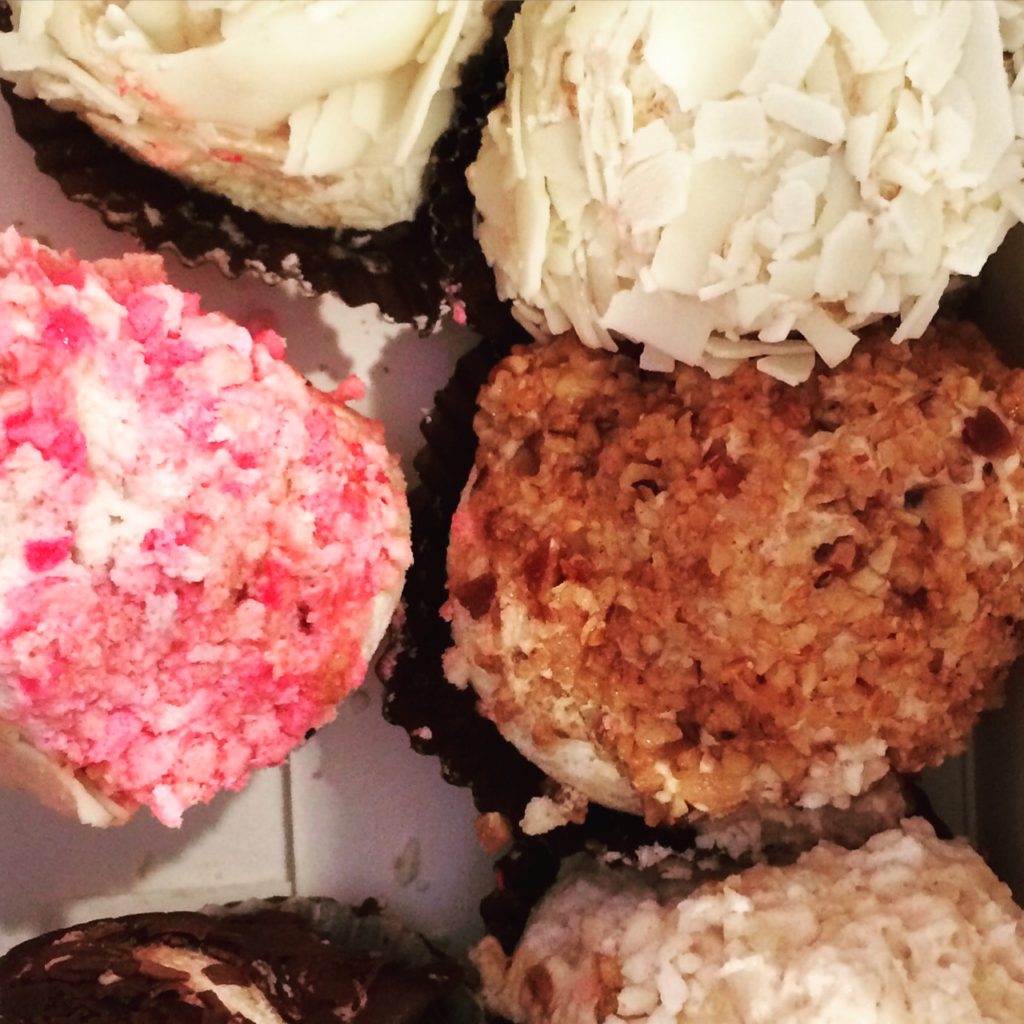 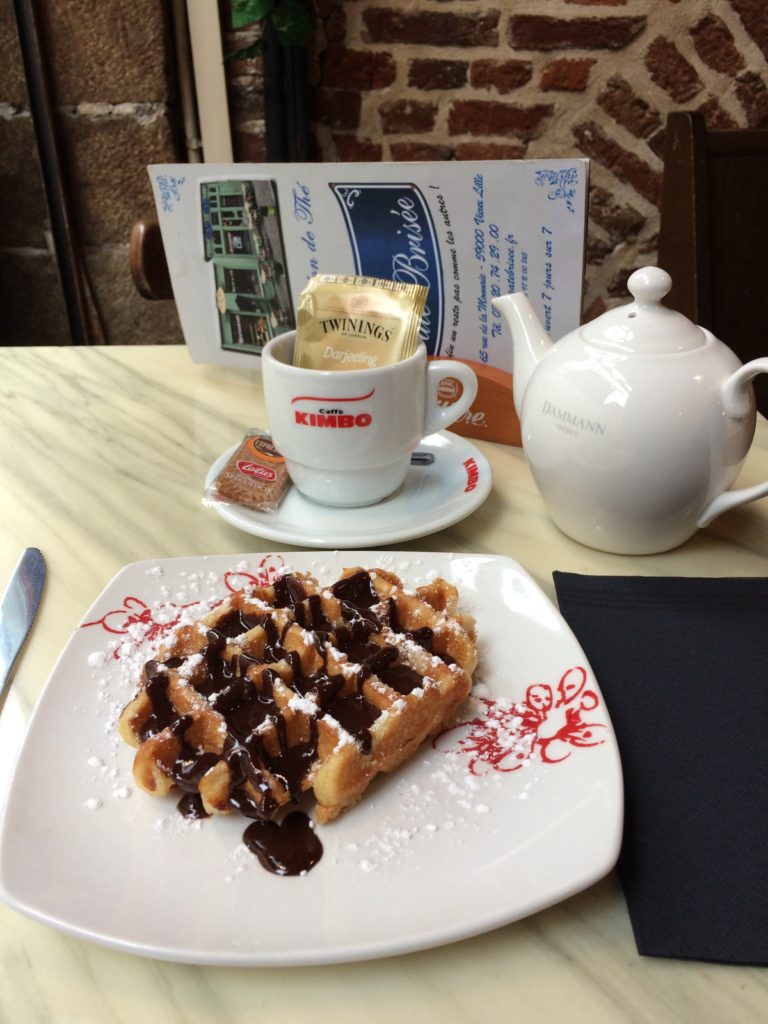 And a special nod to Aurelie from L’Echappee Biere, which runs beer tasting scavenger hunts around Lille. I was dubious about going on a beer tasting while 7 months pregnant but as you follow clues around town to find the next bar for your tasting you get to discover the city, and Andrew was more than happy to drink my beer. Find out more on their website – 100% recommended!

Here’s me comparing my bump with some Lille locals: 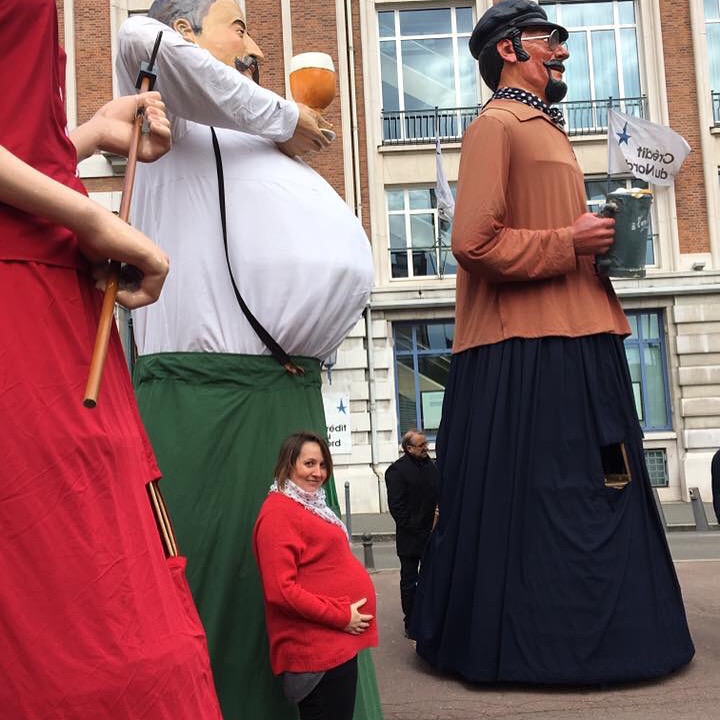